CORRECTION: This story was updated on October 14 to correct the date of the New Trier east campus open house. It is on Sunday, October 15. DailyNorthShore regrets the error.

WINNETKA – When New Trier High School celebrates the addition to its east campus on Sunday, October 15, visitors will be able to tour the campus, including its new “green roofs.

The first school-based green roofs that are walkable in the metro area, the two 3,000-square-foot rooftop patios are located on the fourth floor of the new building. They are each large enough to hold about 100 people.

While the original plans included the green roofs, due to budgetary constraints the district decided to delay further construction. But the green roofs were brought to fruition after two student organizations and the New Trier Educational Foundation donated the funds to compete the project, Superintendent Paul Sally told DailyNorthShore. “That partnership is what allowed (this project) to happen,” Sally said.

“The Foundation was excited to partner with the District in this way and help complete the green roof for the students,” Marianne Breen, Executive Director of New Trier Educational Foundation said.

The Educational Foundation raised money through individual donors, alumnae and others who support New Trier. “I am always blown away by how helpful people can be,” Susan Schmitt, Green Roof Chair, said. 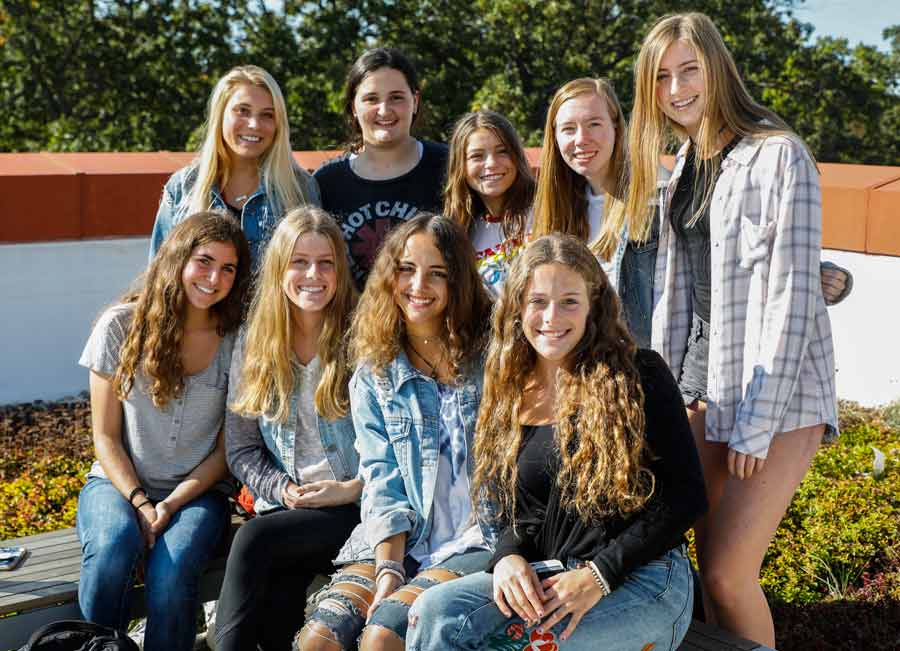 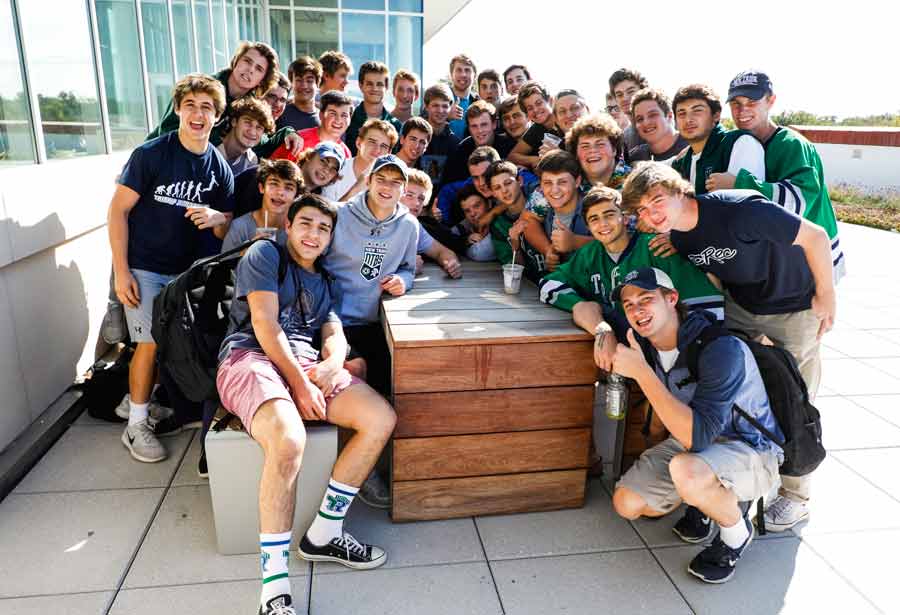 The Tri-Ship Club on the new green roof at New Trier High School.

The green roofs are essentially paver-brick patios with benches and tables surrounded by plants. “It’s a great space and very inviting,” Sally said.

The unique planting system is made up of green trays that include different varieties and shades of sedum, a low maintenance, perennial plant, according to the Educational Foundation website. The plants were grown to maturity in modules before being installed.

Sally said the green roofs will be utilized by teachers and students alike. The patios may prove to be particularly useful for science classes, as well as art classes, taking advantage of the natural light.

“Many teachers will take advantage by taking classes outside to mix things up,” Sally said. When open, the green roofs will always be supervised, but the school plans to keep them open as many periods as possible during the day, Sally said.

Besides serving as an excellent spot for students and classes to take a break from the indoors, the green roofs have numerous other benefits, according to information on the Educational Foundation website. Green roofs reduce air and noise pollution, they extend the life of the roof by acting as a shield against the elements, and they also save energy by further insulating the roof.

In fact, the green roofs are part of the school’s commitment to sustainability and will help New Trier reach its Silver level LEED certification, according to Sally. 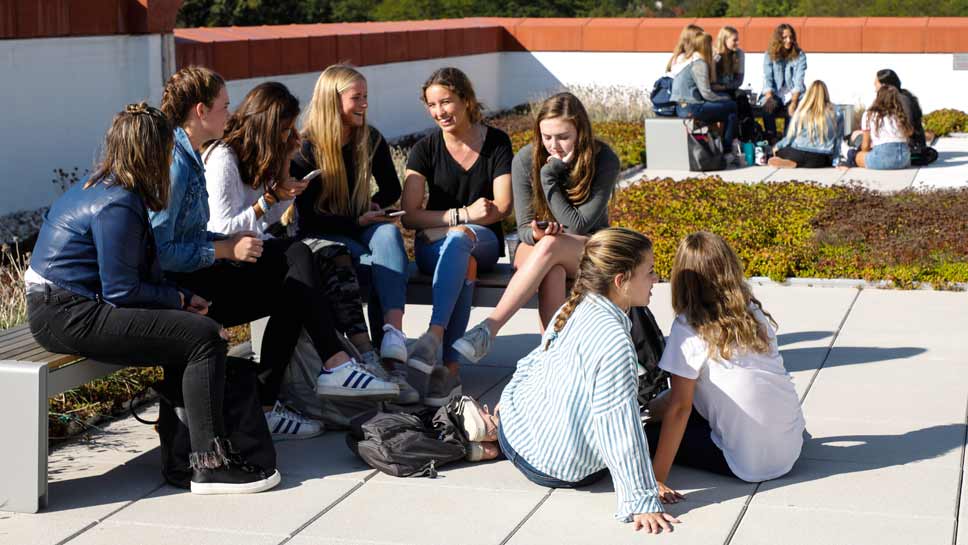 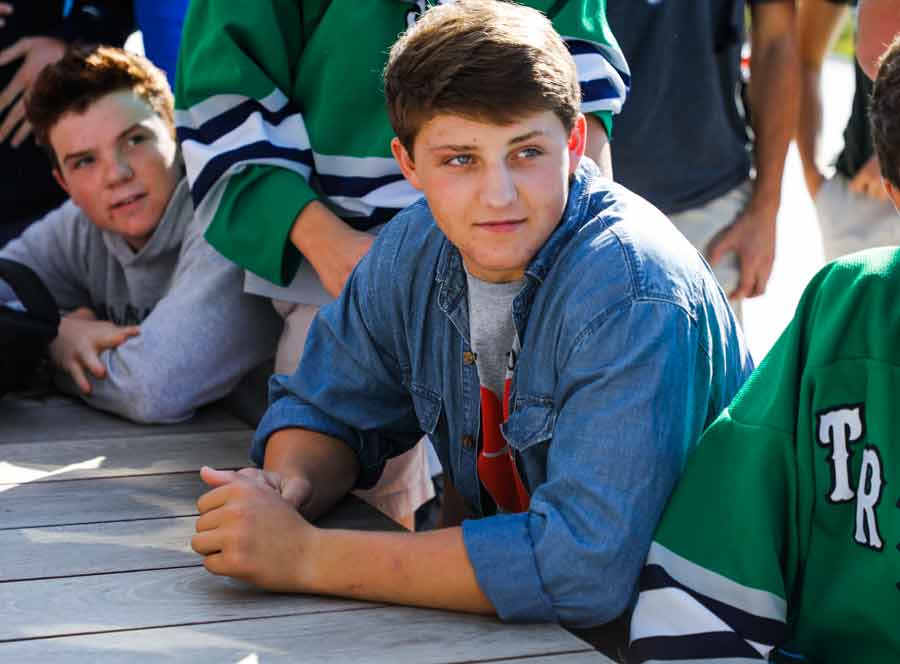 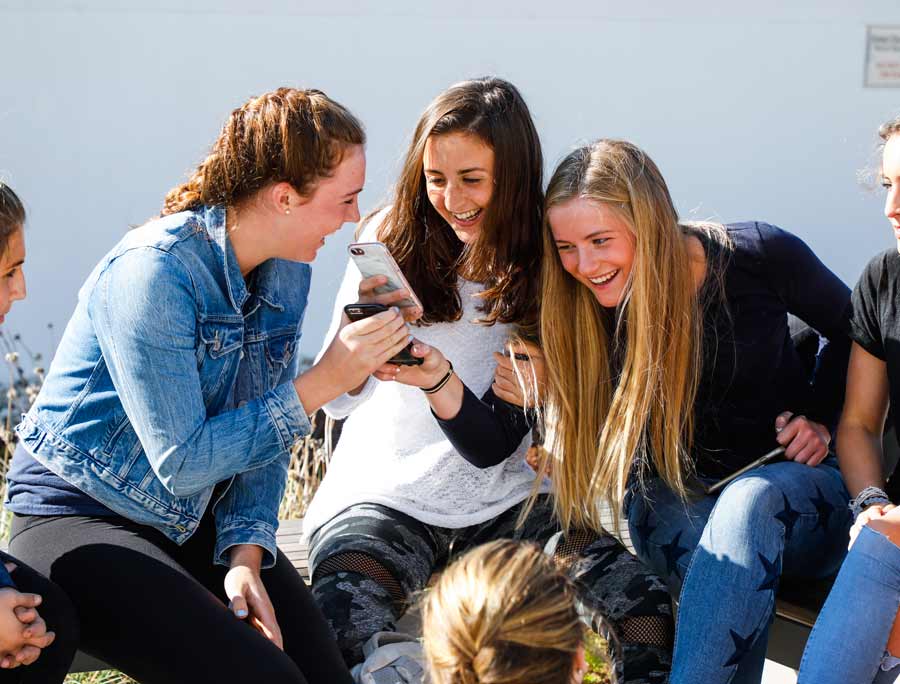 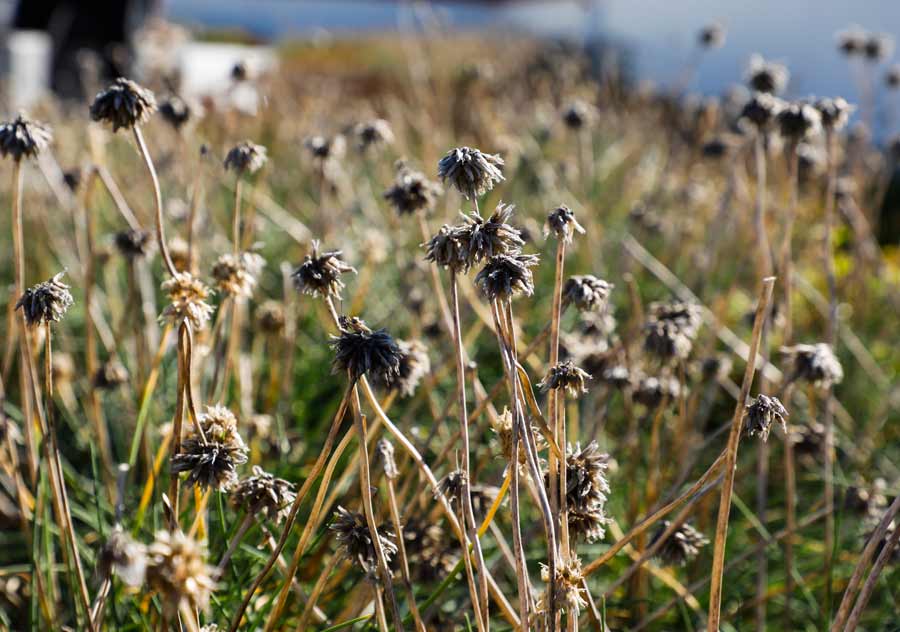 The New Trier dedication is scheduled for Sunday, October 15 beginning at 2 p.m. in the Gaffney Auditorium, 385 Winnetka Ave. Winnetka. Here is information about the event from a press release:

On Sunday, October 15, New Trier High School community members will get their first look at the new Winnetka Campus addition as the school hosts New Trier Anew, a celebration and open house to thank community members for their support of the two-year construction project.

New Trier Township residents, alumni, parents, students and staff are invited to this special event on Sunday, October 15, beginning with a dedication ceremony at 2 p.m. in Gaffney Auditorium, followed by a ribbon-cutting ceremony directly outside the auditorium at 2:45 p.m. An open house with self-guided tours, student entertainment and light refreshments will take place from 3-5 p.m.

Peter Blair Henry, dean of New York University’s Leonard N. Stern School of Business (New Trier ‘87), will give the keynote address, and international opera star Matthew Polenzani (New Trier ‘86) will perform. After the dedication ceremony, guests are invited to tour the new building and help rededicate the McGee Theatre, Ann Brierly Art Gallery and Baumann Student Center, new spaces to replace those that existed in older buildings demolished as part of the project.

“We are thrilled to welcome community members into this wonderful new addition that will serve our students with exciting teaching, learning, performance and collaboration spaces for generations to come,” said Superintendent Paul Sally. “It is only because of the support of New Trier Township residents that we were able to bring this vision to life, and we cannot wait to share this building with them.”

New Trier Anew caps a process that began in 2014, when Township residents approved the issuance of $89 million in bonds to fund the new addition, replacing three aging, inefficient and inaccessible buildings on the west side of the campus. Crews broke ground in June 2015 and completed the addition in two phases.

Phase One opened to students in the 2016-2017 school year and included the first new core academic classrooms constructed on the campus since 1957, along with a new student cafeteria, library, green roof, culinary lab and Applied Arts and Art classrooms.

Thanks to the fundraising efforts of the Raise the Stage campaign, New Trier’s Tri-Ship and Girls’ Club and the New Trier Educational Foundation, the District was able to fully finish and outfit the Hayes-McCausland Theatre and the two green roofs. Raise the Stage raised more than $1.2 million in donations for the theatre, named after Mary Catherine Hayes ’10 and Sarah McCausland ’13. Tri-Ship and Girls’ Club contributed $100,000 for the first green roof, and the Educational Foundation has pledged $100,000 for the second green roof.

A central feature of the entire addition is a bright, skylit concourse that connects the new West Building to the existing North Building, Tower Building and Gaffney Auditorium. Two new elevators enhance accessibility to the campus for people with disabilities. The District is seeking LEED Silver Certification or higher for the entire new addition, which was designed with energy efficiency and sustainability in mind.

Attendees of the event should enter from the Gaffney Auditorium, located at the southwest corner of the campus at 385 Winnetka Ave., at 2 p.m. on Sunday, October 15. Guests will not be allowed into the new building until after the dedication ceremony and ribbon-cutting have ended.