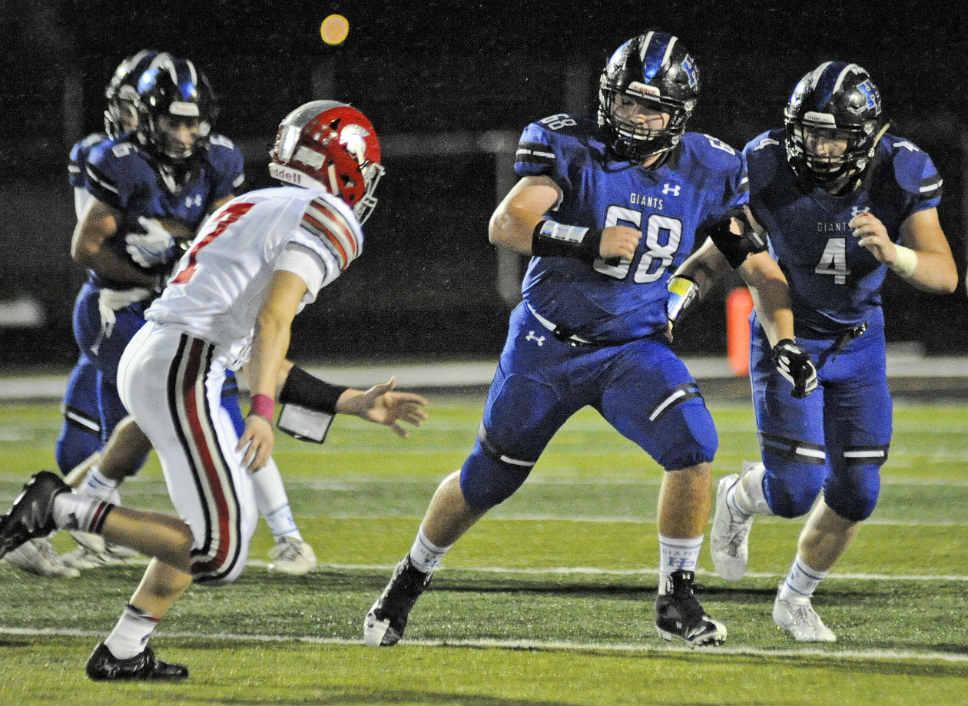 Jack Finfer (No. 68) and Tommy Motzko (No. 4) pave the way for Noah Spitz during Highland Park’s win over Deerfield. PHOTOGRAPHY BY GEORGE PFOERTNER

“I’d probably go into shock,” says the 6-foot, 240-pound Finfer, a huge Urlacher fan. “My favorite player. Loved watching him play. Smart and fast, a great leader. He knew where he had to be on plays, on every play, and he hit hard.”

Adds Giants senior right tackle and good friend Will Hanson: “Jack running into Urlacher and getting the chance to talk with him? Jack would make a spectacle of himself — would probably have a heart attack.”

Finfer, the captain and the heart of the offensive line, stood out on both sides of the ball in Highland Park’s 21-7 defeat of visiting Deerfield High School on Oct. 6. The left tackle had a lot to do with the Giants’ 177-yard ground attack, and on defense — as an indomitable nose guard — he stuffed ball carriers and introduced them unpleasantly to the soggy turf.

On Deerfield’s second possession, Finfer stopped Warriors senior running back Kenneth Kerstein (11 carries, 38 yards) near the line of scrimmage. On the very next play, with senior linebacker Nick Heilizer aiding and abetting, Finfer dropped Kerstein for a two-yard loss after a completion.

He and fellow defensive lineman Marcus Shaw combined for a tackle for loss on the Warriors’ following possession, and the public address announcer at Wolters Field blared Finfer’s name again after Kerstein had to settle for zero yards on a rush near the end of the first half.

Finfer had demonstrated his leadership on the Saturday (Oct. 7) before the Deerfield-HP clash, ordering his teammates to resist any temptation to engage in chest-thumping on social media.

The win last weekend improved the Giants’ overall record to 4-3 (3-0 in the Central Suburban League North), matched HP’s margin of victory in last year’s matchup (14-0, at DHS) and avenged the senior class’ loss in a sophomore game two years ago.

Highland Park’s sophomore football team finished with an 8-1 mark in 2015.

“Yes, I was thinking about that loss during the week before the game and during the game,” Finfer admits. “I didn’t need more motivation than that.”

Go ahead, call Finfer a “Hog.” It would make him smile, because he and the rest of his offensive linemen like the moniker. Embrace it.

“We’re not interesting to watch, but we’re fully aware that when we’re playing well, the team does well.

Giants senior running back Ryan Brincks — who had missed the previous two games with an illness — ran behind that tight band of brothers and racked up 132 rushing yards on 23 carries (5.7 yards per tote). Junior running back Tommy Motzko (7 rushes, 28 yards) scored on touchdown runs of seven and two yards, with the second tally giving the hosts a 20-0 lead at 7:51 of the fourth quarter.

Giants senior quarterback John Sakos had connected with junior wideout Giancarlo Volpentesta for a 10-yard TD to open the scoring with 5:05 left in the second quarter.

Sakos, for one, never has to worry about Finfer’s preparation for Game Days.

Finfer started to play organized football in the third grade. It was love at first hut-hut-hike.

“I have always looked forward to football practice and to football games,” says Finfer, whose sister, Emma, is a sophomore and Division I skier at Bates College in Maine. “I have so much energy during the school day, when I’m thinking about getting out on that field and hitting. I love to compete and hit. Playing football, battling with my teammates … it’s such a good feeling.”

Notable: Highland Park hosts Maine West (6-1) in a Central Suburban League North showdown on Oct. 13 (7 p.m.). Both teams are 3-0 in division play. HP defeated MW 35-14 in Des Plaines last fall. … Highland Park’s 21-7 defeat of visiting Deerfield last weekend was its fourth straight victory after opening the season with three consecutive losses. “It’s who we are,” Giants football coach Joe Horeni said of his club’s 177-yard performance on the ground. “The speed we’re playing with [on both sides of the ball] has been exceptional.” HP has downed Deerfield three times in the last four seasons. … Giants senior wideout Noah Spitz finished with two receptions for a team-high 68 yards in last weekend’s win over Deerfield, while junior teammate Giancarlo Volpentesta caught a pair of John Sakos tosses for 43 yards. Sakos completed 4-of-10 passes for 111 yards. Among the Giants’ defensive highlights on Oct. 6: junior linebacker Noa “No Mo” Morgenstern (2 sacks); junior linebacker Tommy Motzko (sack). HP limited Deerfield to 87 totals yards (42 rushing, 45 passing). “We were flying around out there,” Horeni said. … Quote-worthy —Giants senior lineman Will Hanson, on HPHS senior left tackle/nose guard Jack Finfer: “I’m at his house all the time. He’s like a brother to me. The Finfers … a great clan, with great food.” 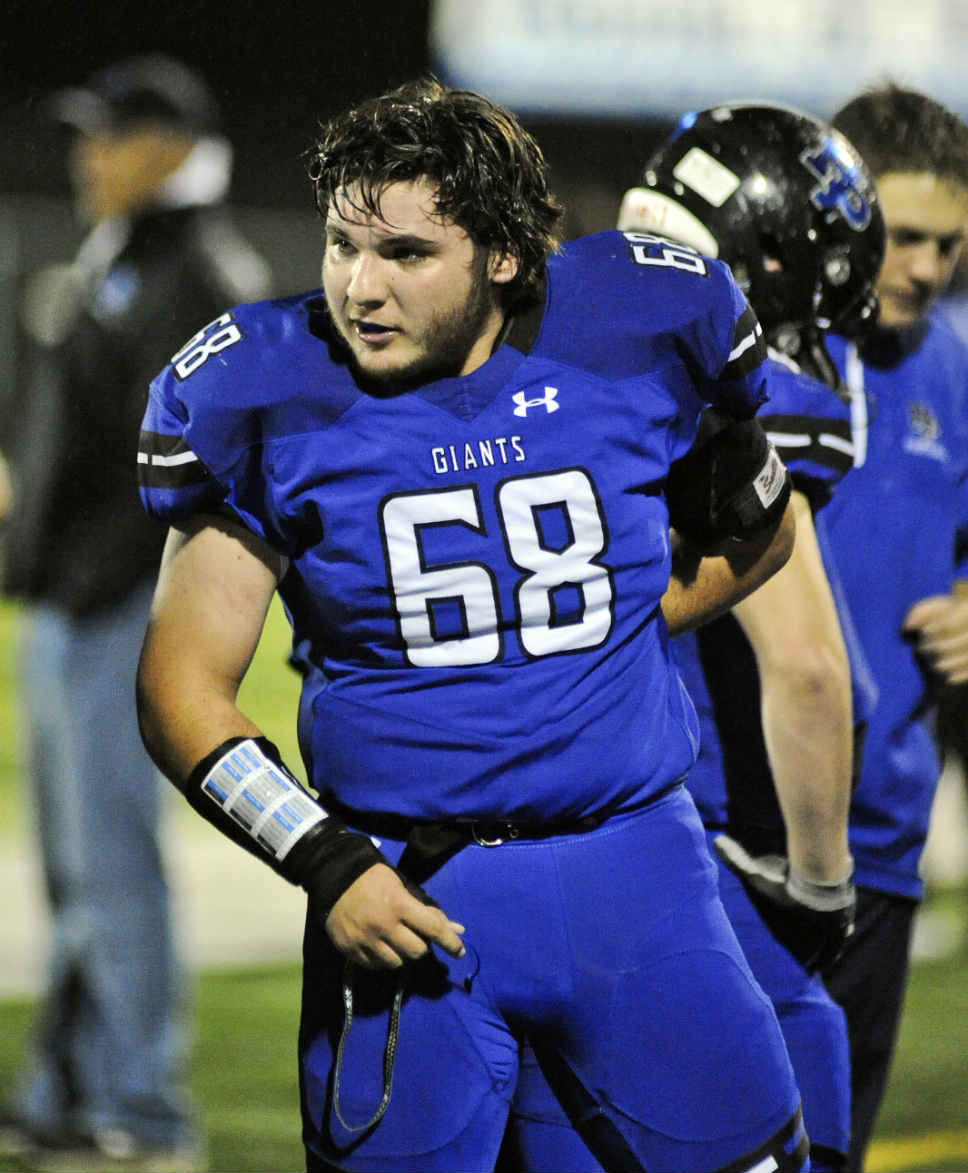