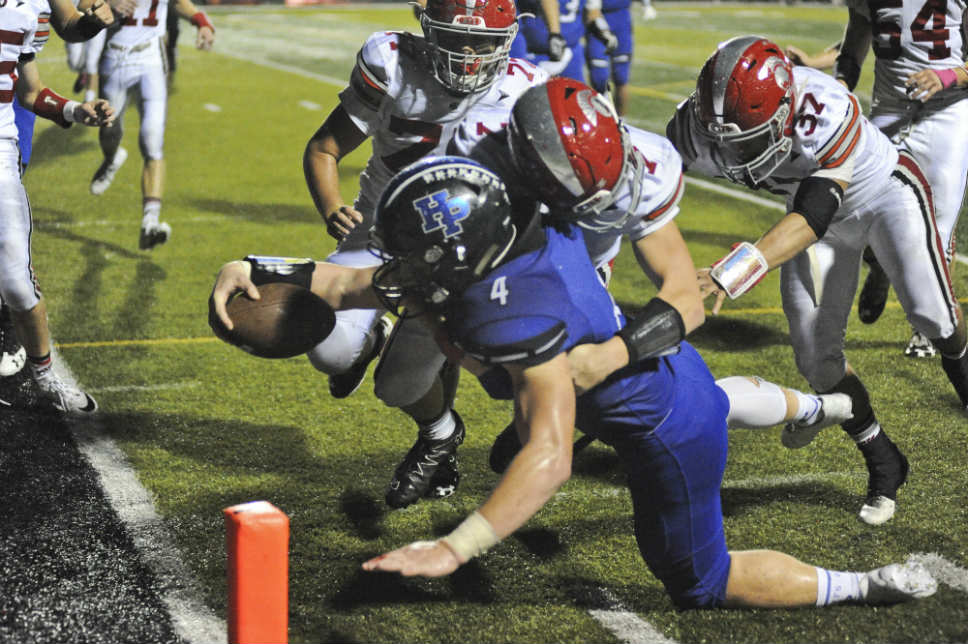 HP’s Tommy Motzko stretches in for a touchdown. PHOTOGRAPHY BY GEORGE PFOERTNER

Highland Park High School rushed the football 81 percent of the time in its 21-7 defeat of visiting Deerfield High School on Oct. 6, with two of the carries — both by junior Tom Motzko — resulting in touchdowns.

“It’s who we are,” HPHS coach Joe Horeni said after his Giants (4-3, 3-0 in the Central Suburban League North) ran their winning streak to four games. “The speed we’re playing with (on both sides of the ball) has been exceptional.”

Giants senior running back Ryan Brincks, who missed the previous two games with an illness, ran 23 times for a healthy 132 yards in soggy conditions, as HPHS topped rival DHS (3-4, 2-1) by 14 points for the second year in a row.

The Giants blanked the Warriors 14-0 in Deerfield last fall.

“Defensively we played pretty well,” Horeni said. “Too bad we didn’t get the shutout; we’re always shooting for a shutout. But I’m proud of the way we played.

“We were flying around out there.”

HP opened the scoring via the air on Friday night. Following a scoreless first quarter at Wolters Field, Giants senior quarterback John Sakos (4-of-10, 111 yards) connected with junior wideout Giancarlo Volpentesta for a 10-yard TD at 5:05 of the second quarter.

“GC is a game-changer,” Horeni said of Volpentesta, who caught another pass for 33 yards.

Motzko (7 rushes, 28 yards) scored on a seven-yard TD run in the third quarter and added a two-yard TD burst in the fourth.

HP limited the visitors to 87 total yards. Eleven of the Warriors’ 42 rushing yards came on a TD run by senior quarterback Jonah Silverglade (8-of-13 passing, 45 yards).

The Giants played relentless defense all night, sacking Silverglade four times and containing the Warriors’ feature back, senior Kenneth Kerstein (11 carries, 38 yards). HP junior linebacker Noa “No Mo” Morgenstern sacked Silverglade once and combined with a wave of swarming teammates for two others; Motzko dropped the QB eight yards behind the line of scrimmage for another sack.

Giants senior defensive lineman Jack Finfer stuffed several runs at or near the line scrimmage, particularly in the first half. Classmates Nick Heilizer (linebacker), Noah Spitz (defensive back) and Luke Baldwin (DB) also played ferociously when Deerfield had the ball. 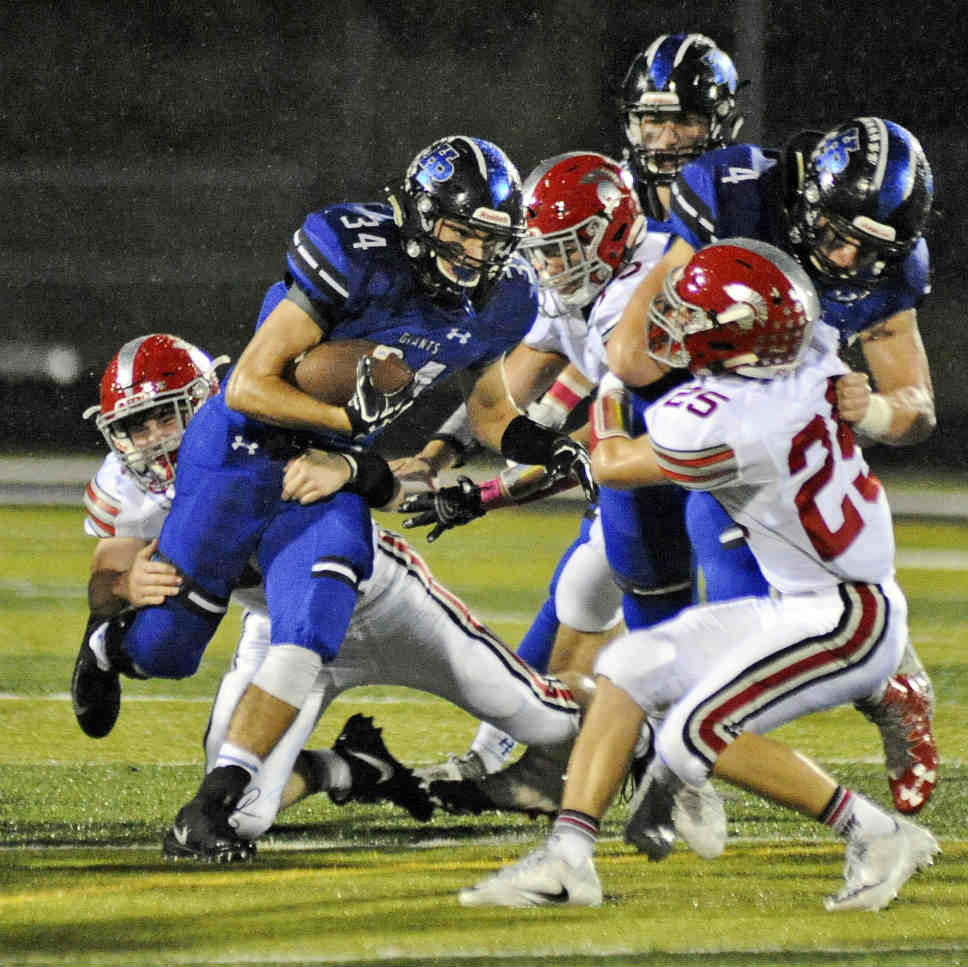 Ryan Brincks (No. 34) follows the block of Tommy Motzko during Friday’s action. PHOTOGRAPHY BY GEORGE PFOERTNER 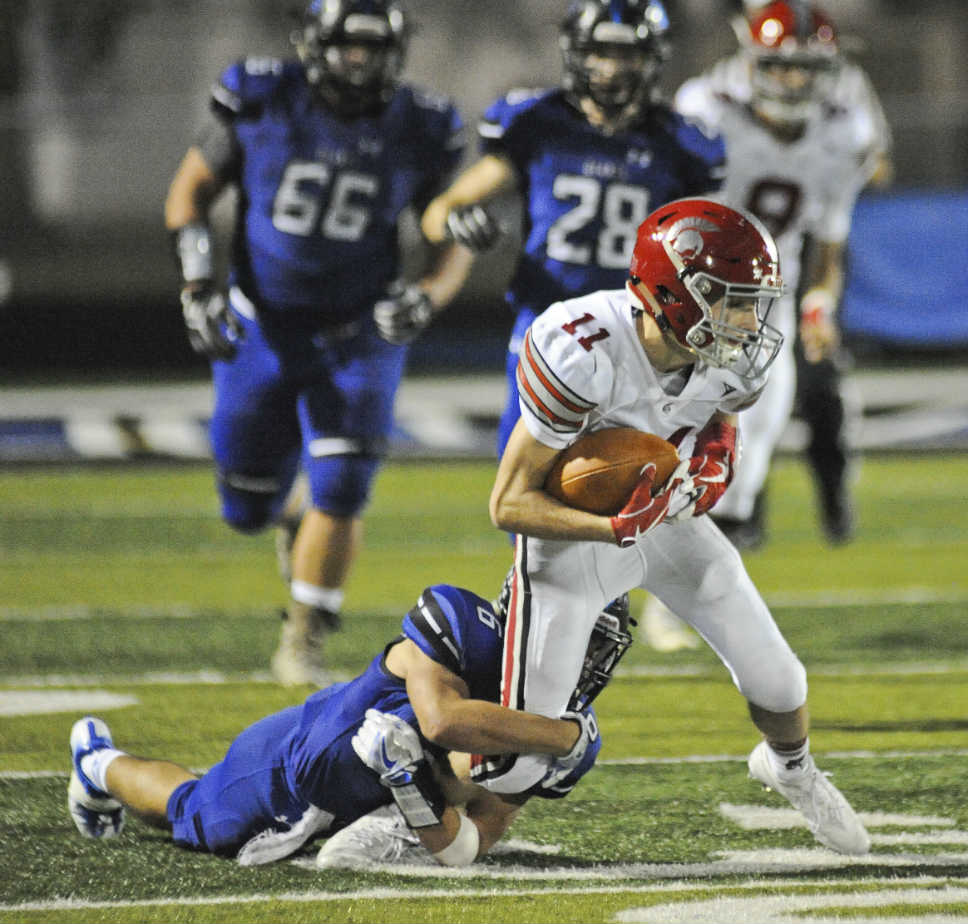 Deerfield’s Michael Gargiulo (No. 11) tries to slip away for HP’s Noah Spitz. PHOTOGRAPHY BY GEORGE PFOERTNER 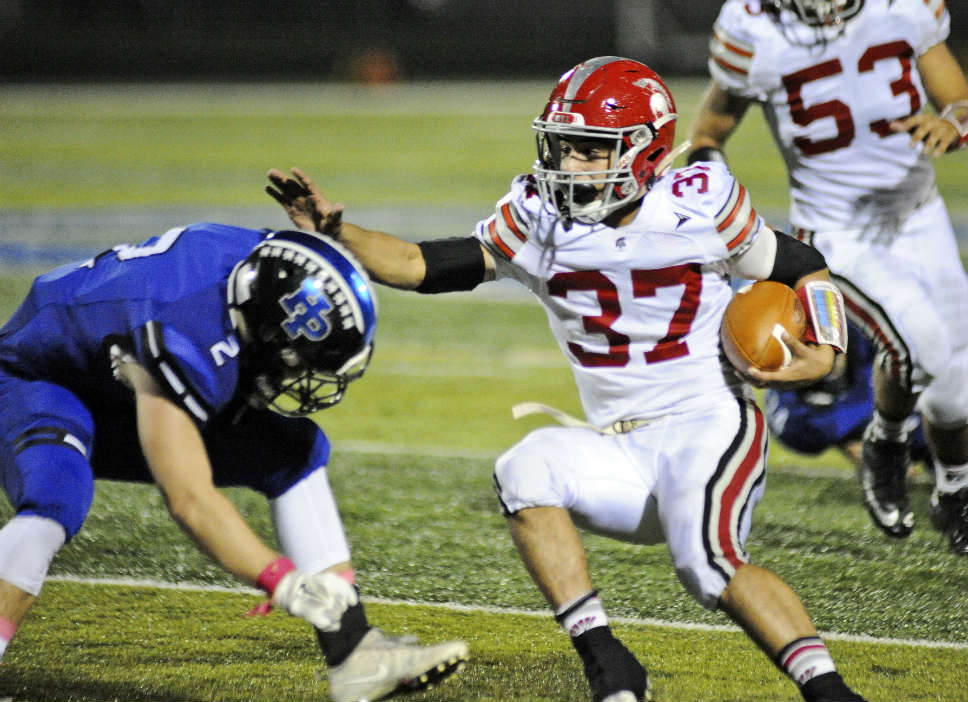 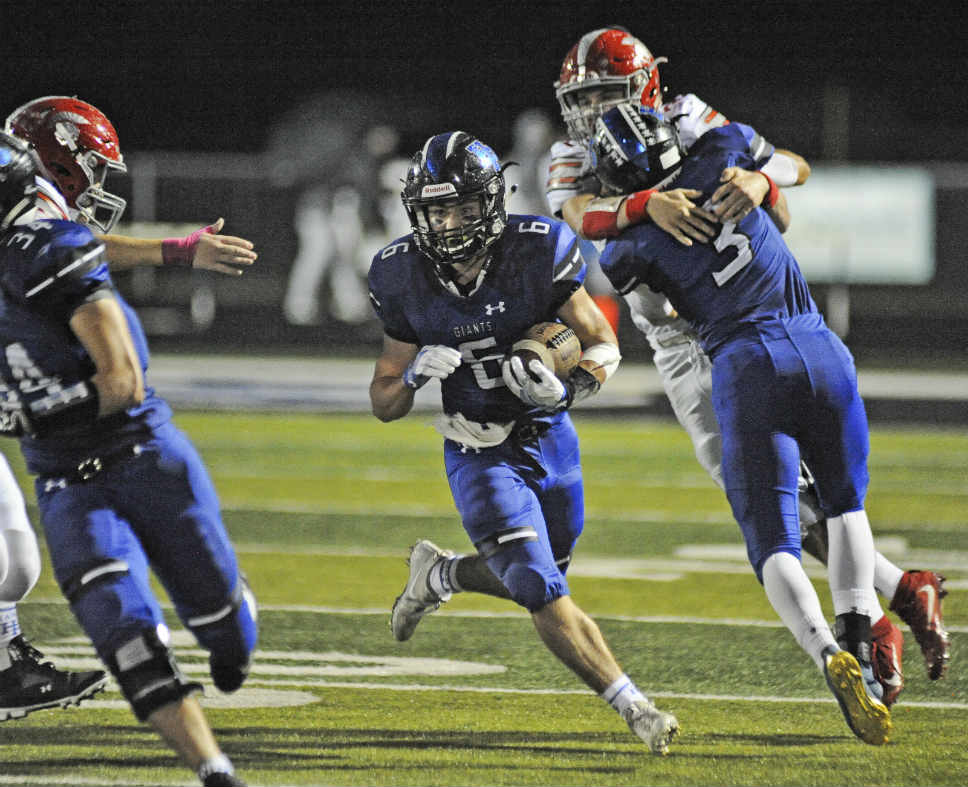 Noah Spitz of the Giants heads up field after receiving block from Giancarlo Volpentesta (No. 3). PHOTOGRAPHY BY GEORGE PFOERTNER 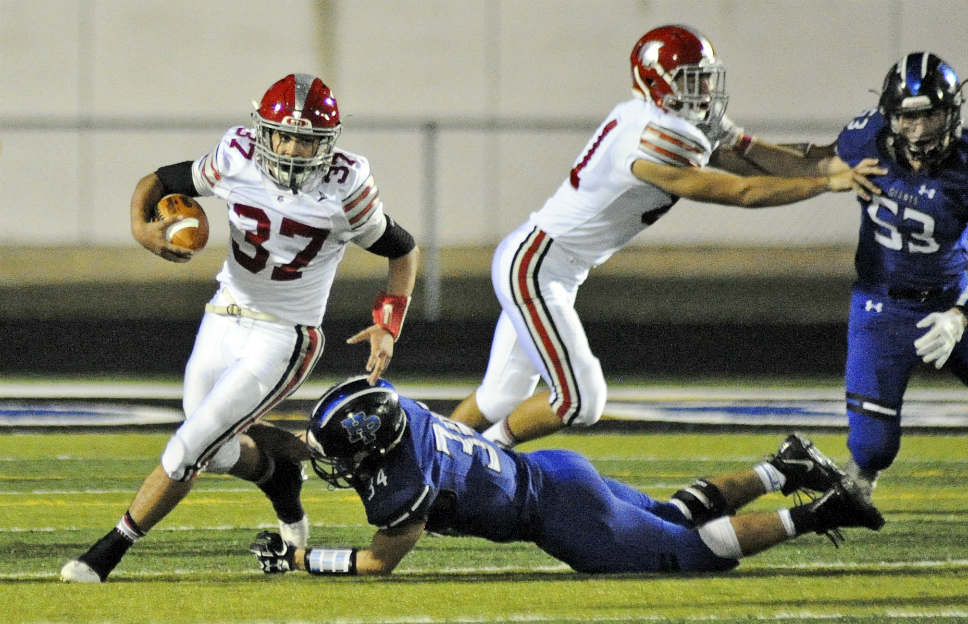 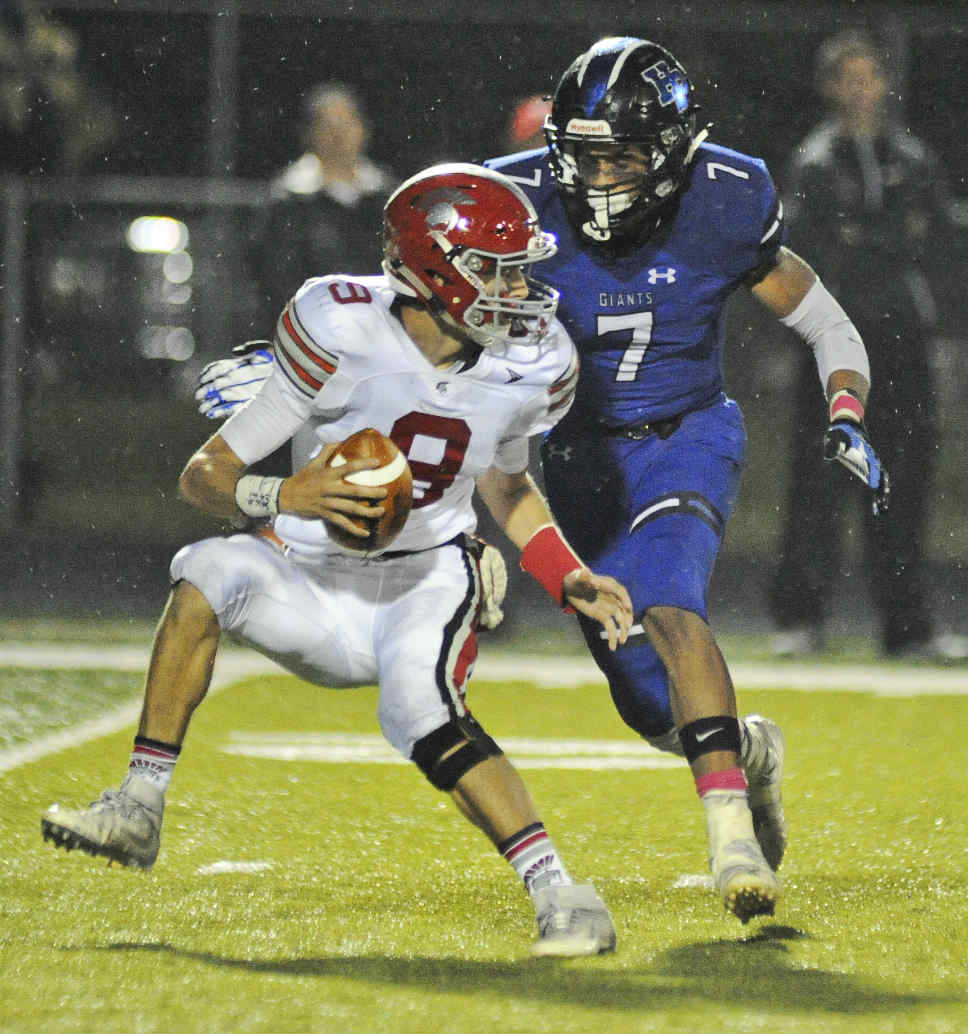