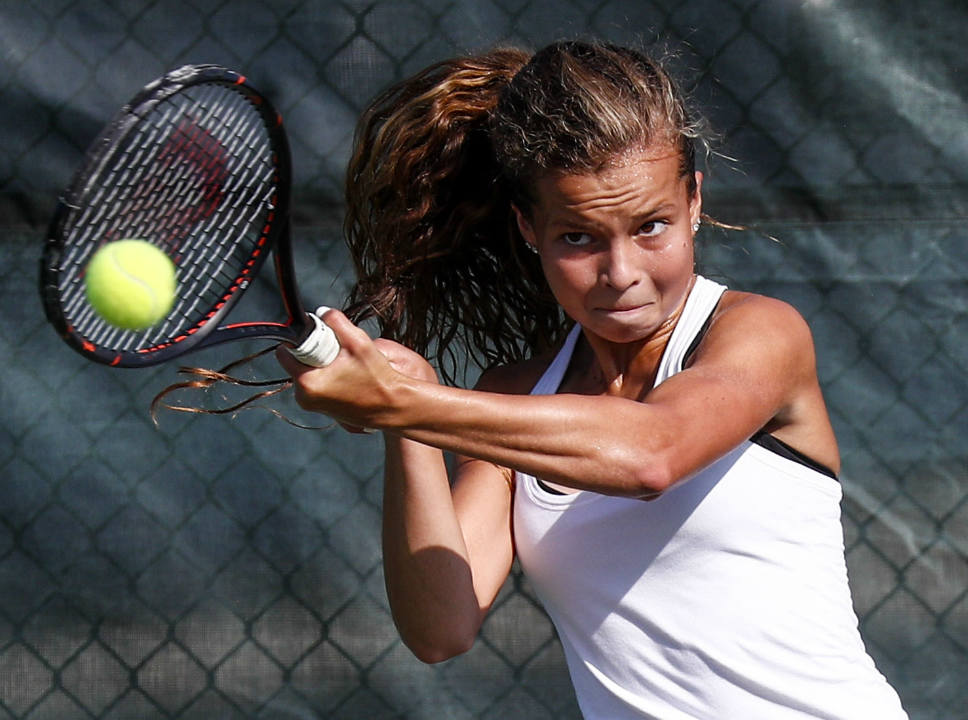 Kiley Rabjohns of the Scouts blasts a backhand during singles play at the Cookout Invite. The freshman remains undefeated entering the second month of the season. PHOTOGRAPHY BY JOEL LERNER

Geese honked above the tennis courts.

A train’s horn blared, drowning out the clattering it had made to announce its arrival.

Catchy, pop music — serving as entertainment for spectators and players before the start of a field hockey game — emanated from the stadium near the tennis courts.

But Lake Forest High School freshman Kiley Rabjohns produced the most emphatic sounds on Sept. 23 with her tennis racket, in a No. 1 singles match against Lyons Township senior Joie Reisch at the Cookout Invitational in Lake Forest.

She also mixed things up with a melodious forehand slice here or with a dulcet backhand slice there, extending points and wearing out Reisch in 90-degree temperatures — on a sunny second day of autumn.

Rabjohns lost the first game of the match but exited the court with a resounding 6-1, 6-0 victory to maintain her undefeated record.

“Kiley hits the ball early, on the rise, and goes for her shots,” Scouts assistant coach Corky Leighton says. “She picks the right shot to hit, every time, with a motor that’s always running. Amazing; she’s amazing. She’s quick and talented. Her game is simple, and she makes tennis look simple with the kind of talent she has.

“But you know what I really like? Kiley is always working, always looking, to improve her game.”

And to think: Rabjohns — a Blue Chip netter (Class of 2021) ranked No. 18 in the U.S., No. 3 in the Great Lakes and No. 2 in Illinois by tennisrecruiting.net — works with an instructor who charges exactly zero dollars an hour and is a former Yale … hockey player.

Josh Rabjohns is his name.

Or “Dad” to Kiley and her sister, Autumn, a hard-hitting Deer Path Middle School seventh-grader with a penchant for turning fluffy, fresh, right-out-of-the-can tennis balls into bald ones in no time.

Josh often drills on local courts with both of his daughters.

“Kiley is focused on every point, and she loves to compete,” Josh Rabjohns says.

Rabjohns’ most formidable weapon might be her comportment between points. Watch her after she cracks a winner or after she makes a rare error. Her body language screams POSITIVITY after a winner and after an error: Forget about what just happened; on to the next point.

“So calm and composed on the court, no matter what the score is in a match — that’s Kiley,” says Scouts senior doubles player Julianna Roman, a tri-captain with classmates Teresa Fawcett and Emily Gorczynski. “If she’s frustrated, she would never let her opponent know it. She goes out there and plays tennis like it’s a chess match, all structured and all business. You don’t want to mess around with her on the court.

“Off the court,” Roman adds, “Kiley is a bit reserved but fun and sweet and nice.”

And thrilled to be a part of her school’s varsity tennis squad. Every. Single. Day.

“To hear cheers from your teammates and to cheer for your teammates … I love the atmosphere of high school tennis, love everything about it,” says Rabjohns, whose biggest prep win to date is a 6-4, 2-6, 10-8 (super tiebreaker) defeat of Deerfield High School junior Emily Casati, whose mother, Michelle (Torres), played for New Trier, won the state singles title in 1981 and reached a career-high world singles ranking of No. 18 on the Women’s Tennis Association Tour in 1984.

“Early on, in preseason, I felt welcomed. Everybody was nice, especially [sophomore] Grace Gescheidle, as she said bye to me after a day of conditioning. I’m having fun around my teammates, around my new friends. You don’t forget how people make you feel when you’re a part of something for the first time.”

“I thought, ‘Wow,’ ” Murphy recalls. “Honestly, I thought the same thing about the whole group, our strongest team in three years. I noticed, right away, a different tone in our tryouts; it was serious, a little quieter. Kiley did a fantastic job with our preseason conditioning requirements. Nothing fazed her. Her talent, her work ethic, everything about her stood out. Her composure, as a freshman … I love that. She’s cool and focused and coachable. Great team player, too.”

Life off the court — like life on it — often requires adjustments. Rabjohns continues to make those in her first month at LFHS.

“So much homework,” she says with a smile. “But I’m getting used to it. At lunch? So many food options. Walking into the cafeteria at school is like walking into a big grocery store.”

As Rabjohns continues to ring up victories, with most of them lasting less than an hour, don’t expect more than her tennis racket to do the talking for her. The superb athlete behind those loud, crowd-pleasing winners has no desire to toot her tennis horn.

“She’s really humble,” Fawcett, one of the tri-captains, says. “There’s nothing showy about her. Kiley is a really good tennis player, with focus and determination. When you watch her play, when you see how zoned in she is on every point, it’s clear how dedicated she is to the sport and how much she has benefitted from repetition. You don’t hit the shots she hits in matches without putting in the hard work.”

Notable: The Scouts’ other winners in their 3-2 defeat of Lyons Township’s Lions at the Cookout Invite on Sept. 23: Emily Gorczynski (No. 2 singles) and Nika Belova/Salma Alsikafi (No. 1 doubles). LFHS received singles wins from Kiley Rabjohns (No. 1) and Alex Slomba (No. 2) and doubles victories from Belova/Alsikafi (No. 1), Olivia Wheldon/Kelly Kunz (No. 3) and Lucy Rubenstein/Keaton Wilhelm (No. 4) in its 4-2 win over Barrington High School at the same invite. … While LFHS assistant girls tennis coach Corky Leighton monitored action and delivered tips and encouraging words at the Cookout Invite last weekend, his wife, Kathy, attended the LFHS field hockey game held at the stadium near the tennis courts. Scouts junior Madden Plante, the couple’s niece, tallied the first goal of Lake Forest’s 7-1 defeat of Deerfield HS, where the couple’s son, Josh, happens to teach math and coach boys tennis. 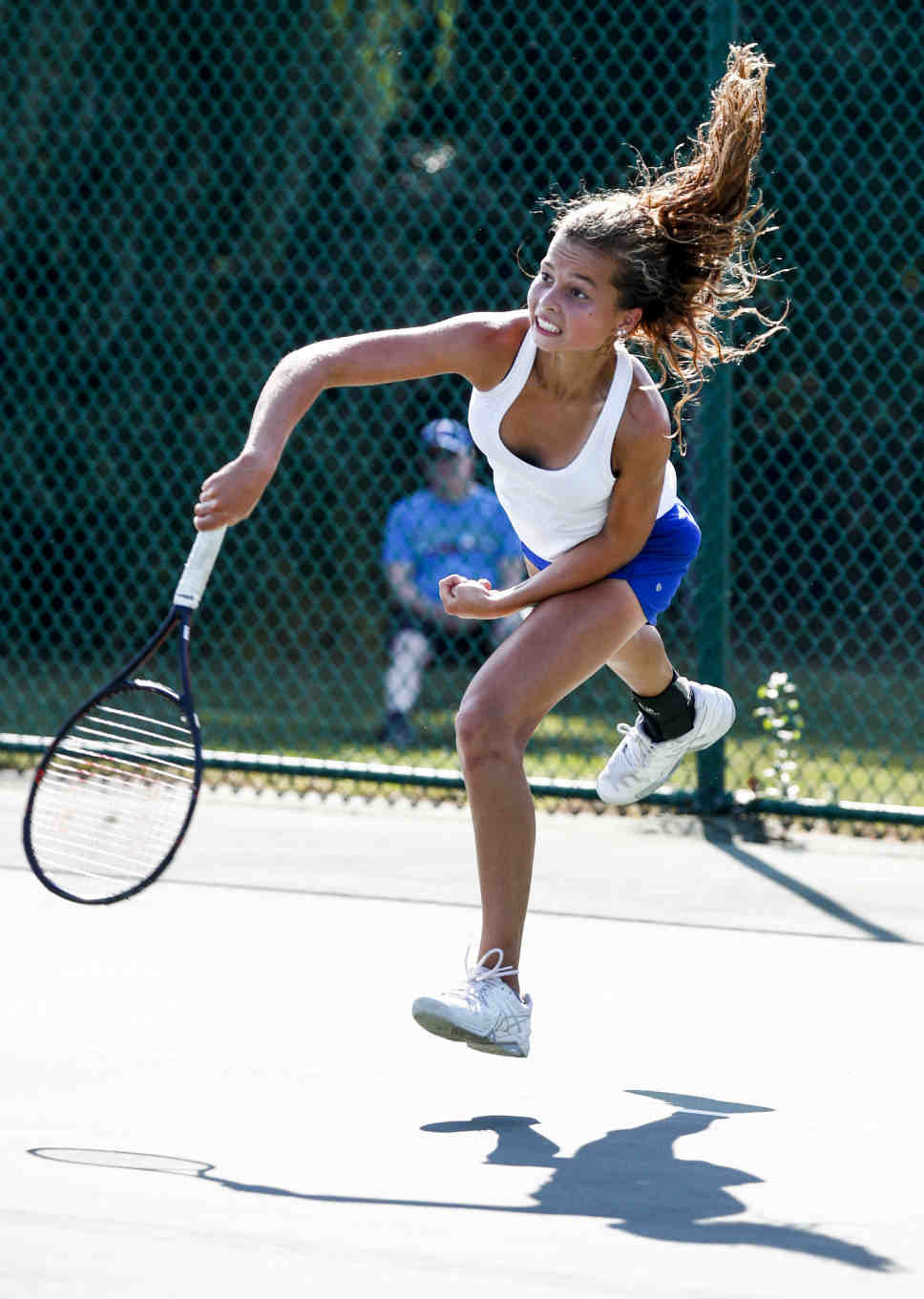