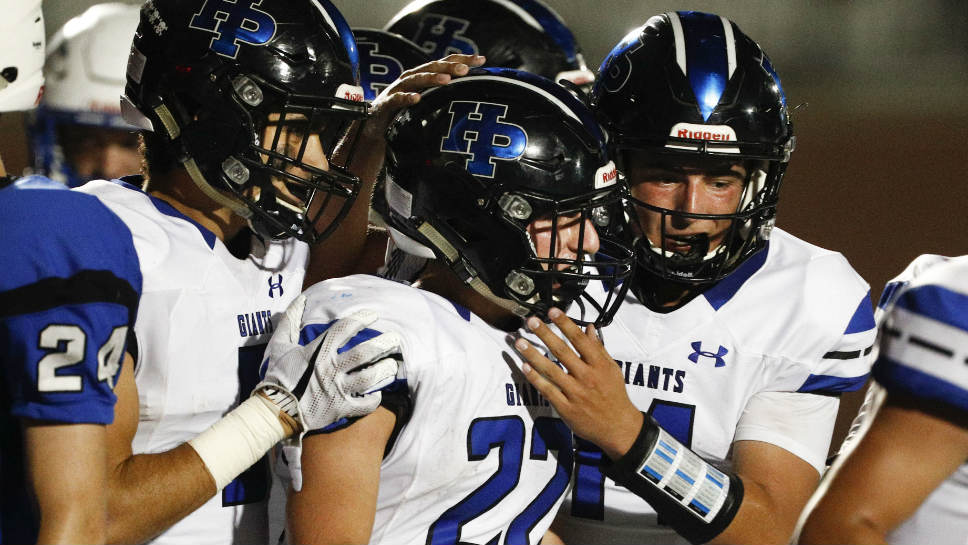 The junior became Highland Park High School’s first 100-yard rusher of the season on Sept. 22 in the team’s 27-14 road win at Vernon Hills.

On the third handoff in HP’s first series, Bloom used a number of spin moves and ended up twisting and turning his way into the end zone on a 38-yard run.

“Just following my blocks,” said Bloom, who finished the game with 128 yards on 22 carries. “I’ve been a running back since the fifth grade. So I’m pretty comfortable running the ball. Don’t need to be nervous.”

The slippery back also broke free on a 15-yard TD run on HP’s second series of the third quarter to give his team a 27-7 lead.

The Giants, who improved to 2-3 overall and 1-0 in the CSL North, needed Bloom to step up — especially since starting tailback Ryan Brincks didn’t dress for the game.

The other offensive standout for HP was junior Giancarlo Volpentesta.

He definitely showed his range in this game.

At 6:01 left in the first quarter, Volpentesta caught a five-yard TD catch on a fade in the right corner.

Then, with 8:53 remaining in the second quarter, Volpentesta snagged a short pass from John Sakos in the right flat, forcefully broke a couple of tackles and raced into the end zone for a69-yard score.

Unfortunately, Volpentesta (3 catches, 82 yards) missed the second half with an injury.

And then, there’s Noa Morgenstern.

His final numbers will look like a misprint: 5 ½ sacks, 13 tackles, 1 tackle for loss, 1 pass breakup.

The junior defensive end/outside linebacker was unmistakably impressive in this Week Five contest.

No one on the Vernon Hills side could block No. 7, who lined up on both edges.

“Just listening to my coaches,” said Morgenstern, an outfielder on the HP baseball team.

“I wasn’t counting,” he said. “Just kept getting ready for the next play.

“I was taught a lot of new methods [earlier in the week],” added Morgenstern. “It was fun.”

He certainly played with purpose and fire. But his night wasn’t perfect. He was called for two major penalties.

“His potential is limitless,” said Horeni, not pleased with the infractions. “He can be an elite player.”

Notable: The final stats won’t tell the story with HP senior Will Hansen. But he was a valuable two-way starter in the win over Vernon Hills. Besides lining up at offensive right tackle, Hansen wore his No. 72 jersey and teamed up with Tommy Motzko at inside linebacker. “I thought he was outstanding tonight,” said HP head coach Joe Horeni. “He’s a kid that didn’t play a lot last year.” … The Giants continue to battle injuries. Two-way lineman Kevin Kaufman had to sit out most of the game with an injury. Jacob Bradford and then Matthew Cortes filled in admirably as the Giants ended up with 254 offensive yards. … Senior guard John Kaufman also missed the game with an injury, while defensive lineman Marcus Shaw started but had to leave the game due to injury. … With Ryan Brincks out, Damien Campos did the kicking for the Giants. 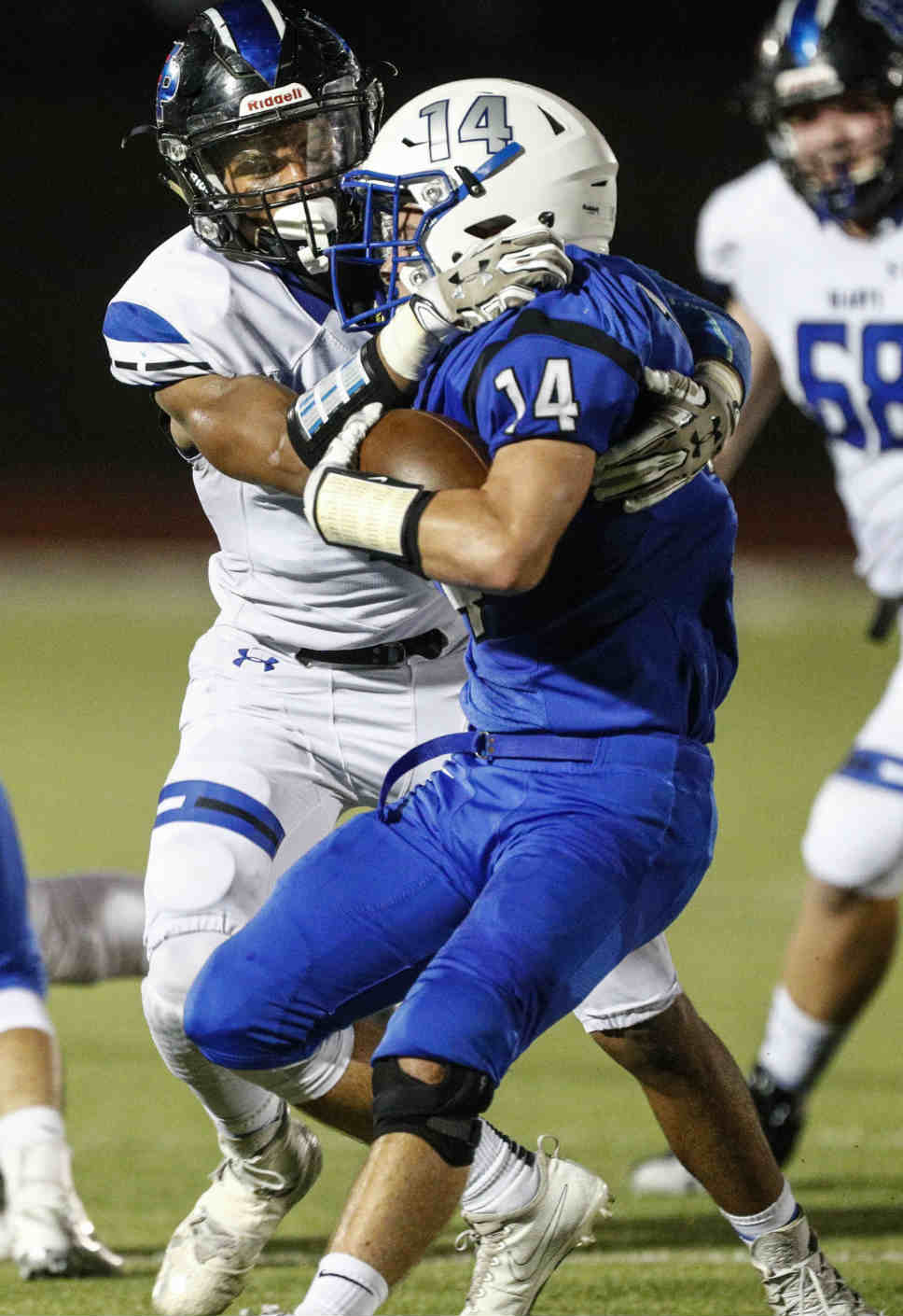 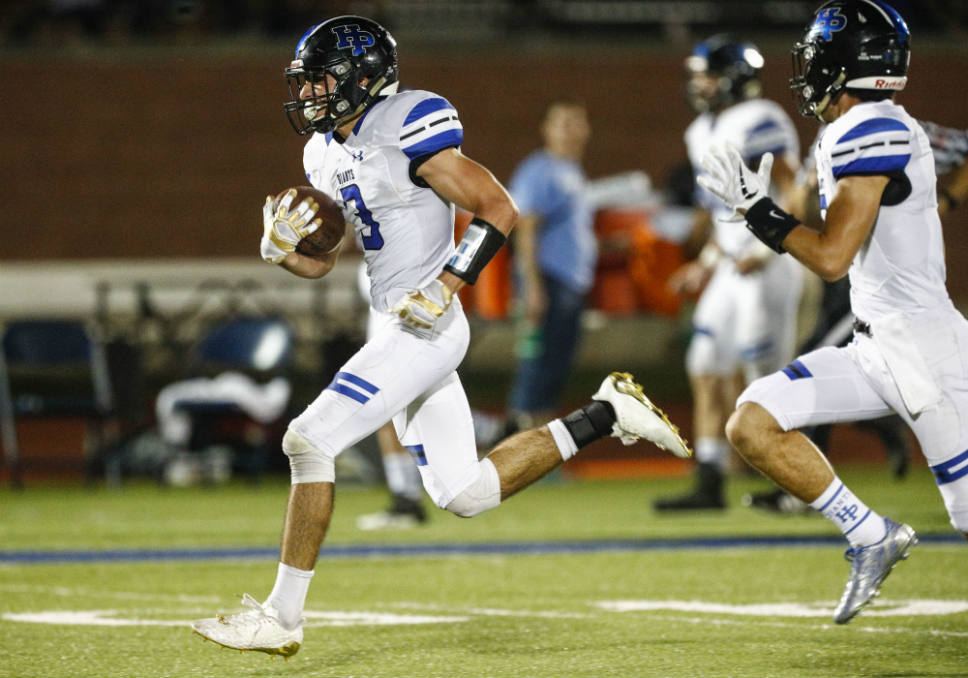 Giancarlo Volpentesta of the Giants races to the end zone on a 69-yard reception. PHOTOGRAPHY BY JOEL LERNER 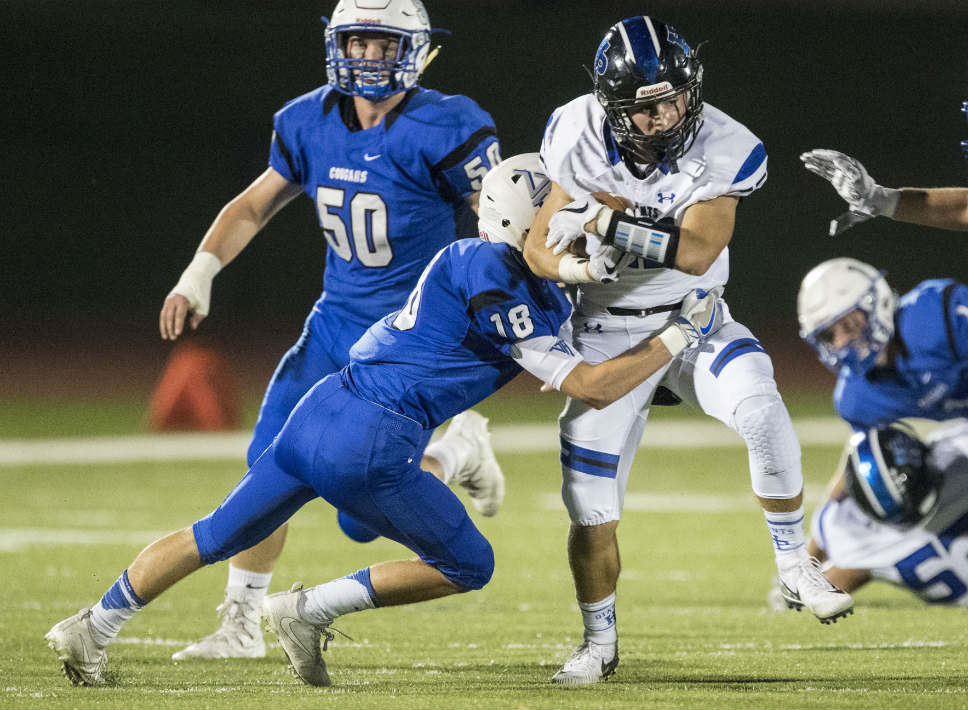 Jared Bloom of the Giants rushed for 128 yards and two touchdowns against VH. PHOTOGRAPHY BY JOEL LERNER