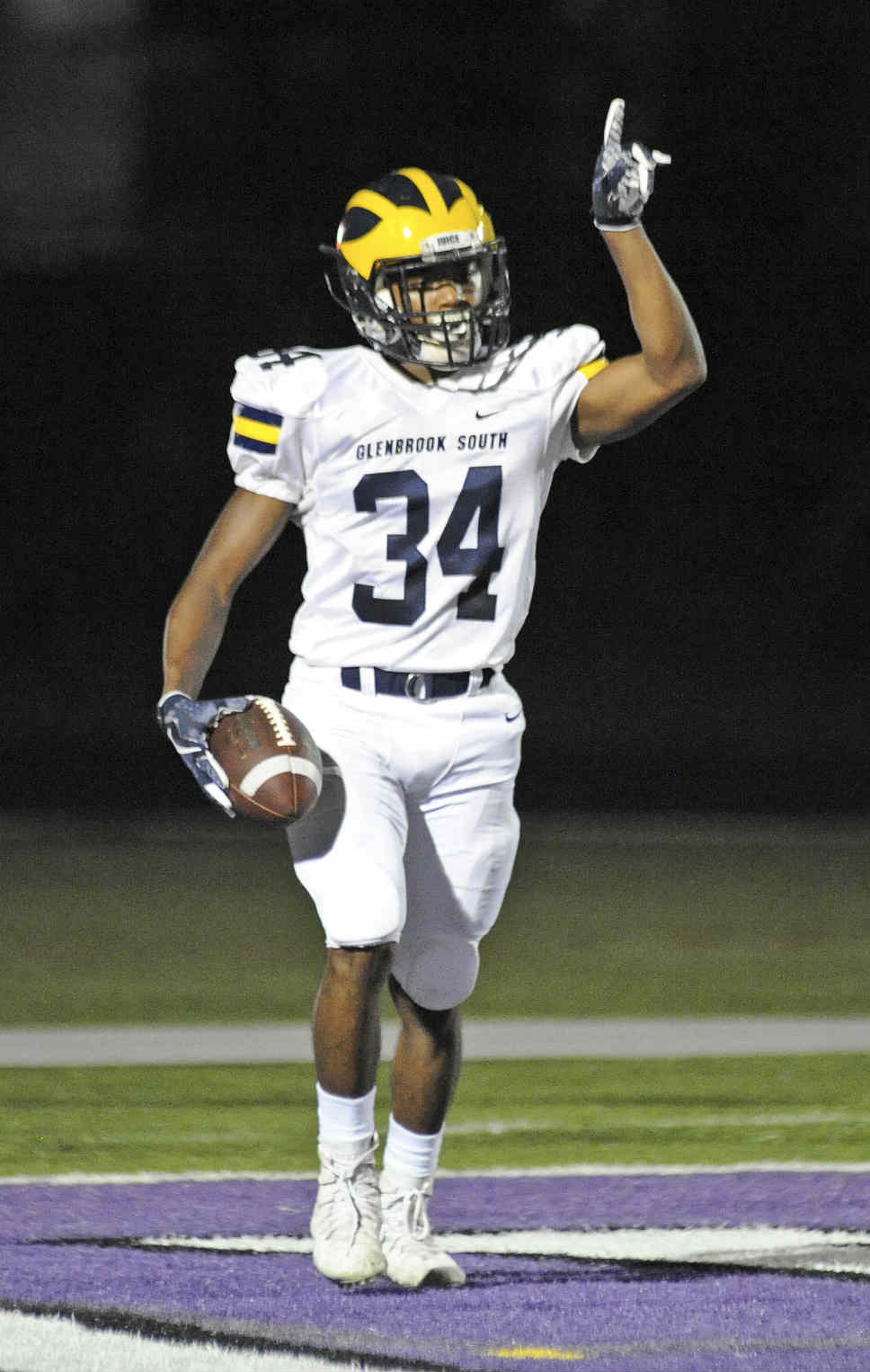 Glenbrook South’s Savontae Garner points to the sky after scoring a touchdown against Niles North. PHOTOGRAPHY BY GEORGE PFOERTNER

At least two Niles North Vikings collided with Glenbrook South senior running back Savontae Garner at the start of a running play up the middle in the fourth quarter of a Central Suburban League South football opener Friday night.

“People kept climbing on my back,” Garner would say later. “So many people.”

By the time he reached the end zone to complete a highly entertaining 17-yard touchdown run in visiting South’s 38-7 victory in Skokie, at least nine defenders had joined Garner for quite a trip.

It wasn’t the first time the Titan had worn a helmet and pads and more than half of a defensive unit during a rush this fall. Conant found it difficult to halt Garner on a similar sequence in a 27-21 Glenbrook South win on Sept. 8.

“There’s that drive in him, plus he’s got a pretty strong lower body,” Titans coach Dave Schoenwetter said after his squad improved to 4-1 and Niles North fell to 2-3 on the first day of fall. “Great offseason — that’s what Savontae had.”

Garner (12 carries, 109 yards) also had a 40-yard TD reception at Niles North on the first possession of the night. He burned North’s secondary and collected a well-placed pass from senior quarterback Jeff Chrones (6-10-1, 107 yards), who also connected with senior wideout Ben Hides for a 17-yard TD late in the second quarter.

Titans junior Julian Aragon hit a 31-yard field goal in the first quarter and made all five of his extra-point tries.

South led 24-0 at the half, and its swarming, suffocating defense blanked Niles North until the 9:21 mark of the fourth quarter. Titans senior linebacker Brendan Darcy set a resounding tone on the host’s first play from scrimmage, dropping a running back for a one-yard loss. Senior defensive lineman Jack Burda and senior defensive back Andy Sirakides combined for another tackle-for-loss two plays later.

“A real good win, especially with it coming in our league opener,” said Schoenwetter, whose 2016 crew (1-8) routed Niles North 63-17 in Week 9 last fall. “I liked the way we bounced back from our [45-24] loss to Barrington last week. One of our themes this year is ‘Respond.’ We came up with an encouraging response tonight.”

Sound bite: “I had a lot of help on that play, especially from one [senior Zach Adams] of my linemen.” — Titans senior running back Savontae Garner, on his 17-yard TD run in which more than a handful of Niles North Vikings failed to bring him down. 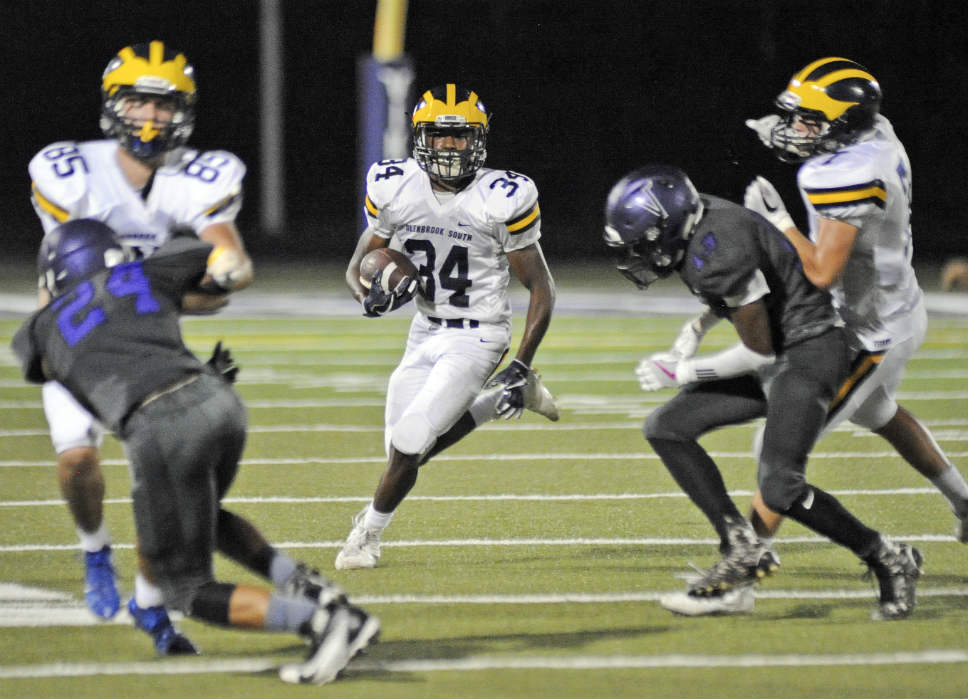 Savontae Garner of the Titans carries the ball in team’s win over Niles North. PHOTOGRAPHY BY GEORGE PFOERTNER 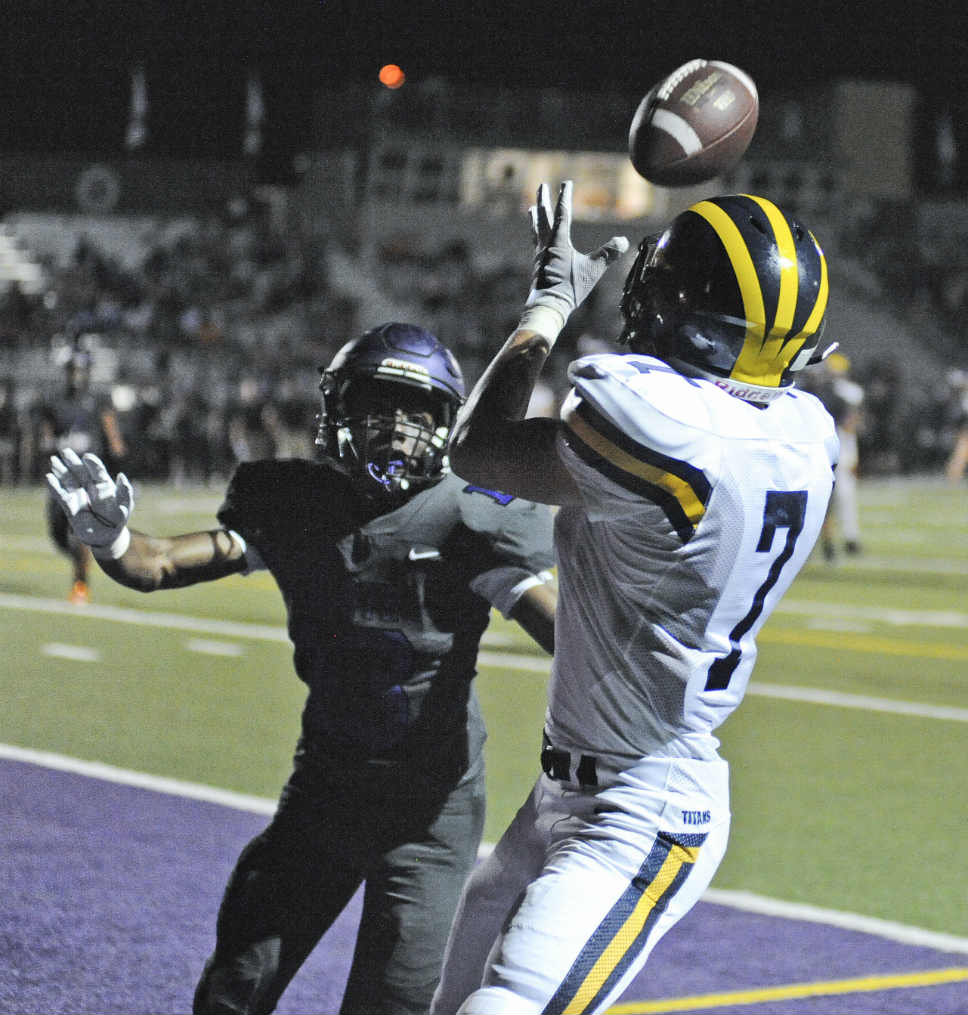 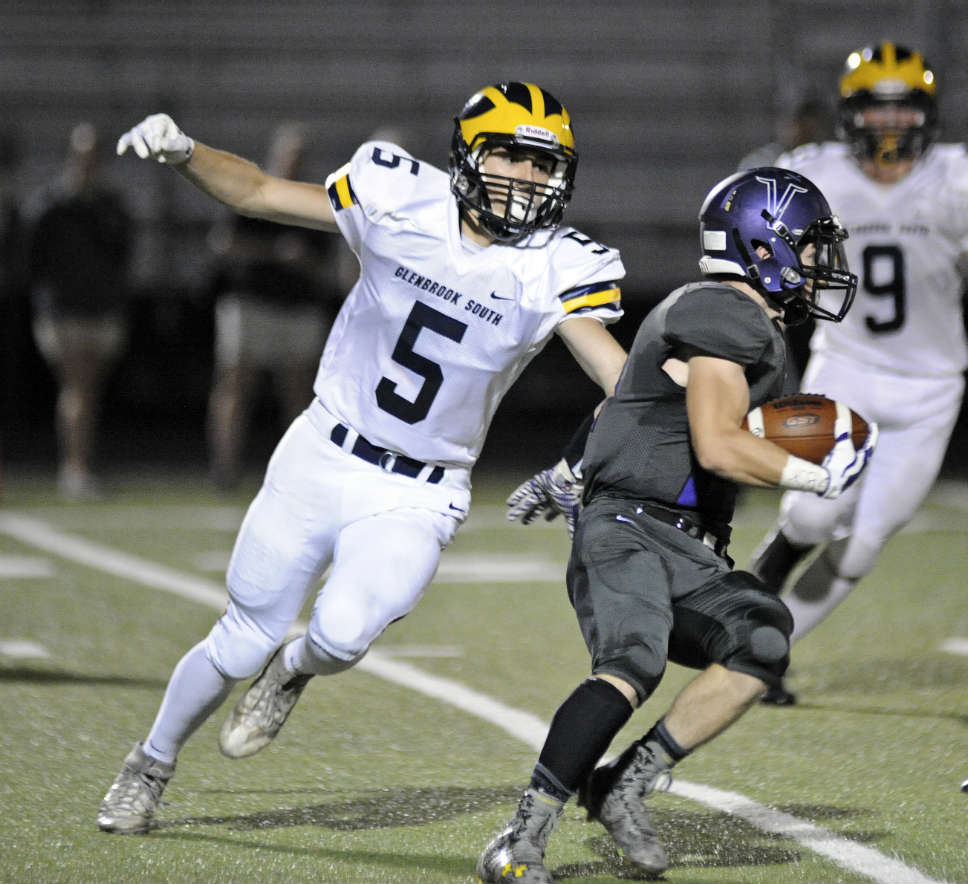 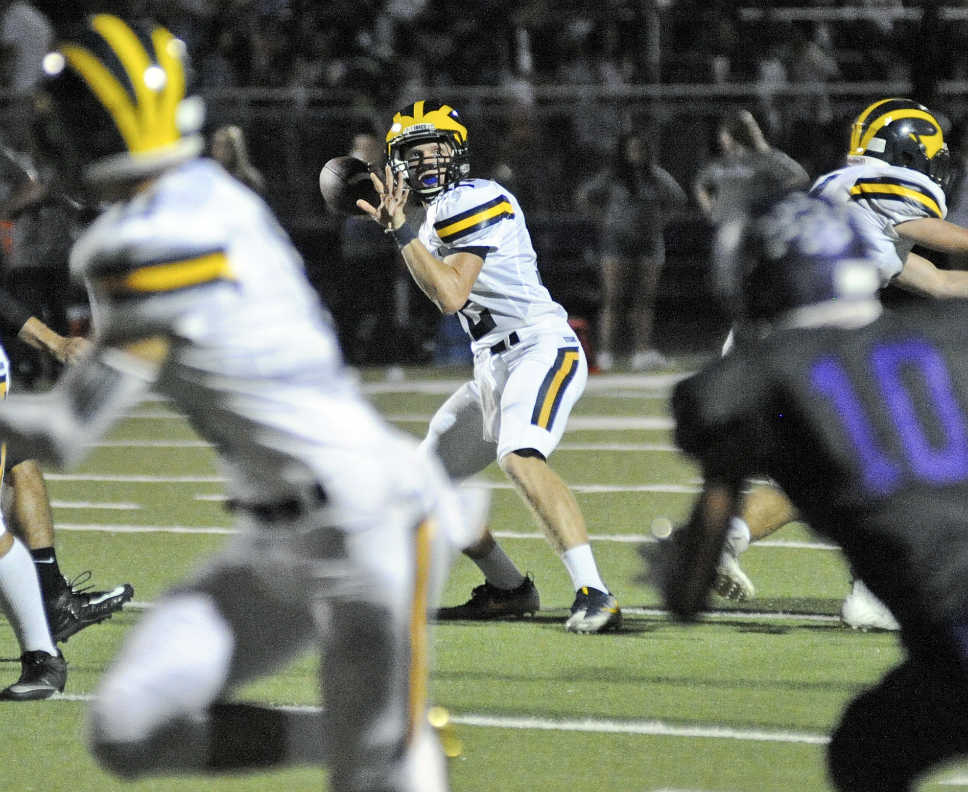 Jeffery Chrones hangs in the pocket before tossing a pass downfield. PHOTOGRAPHY BY GEORGE PFOERTNER 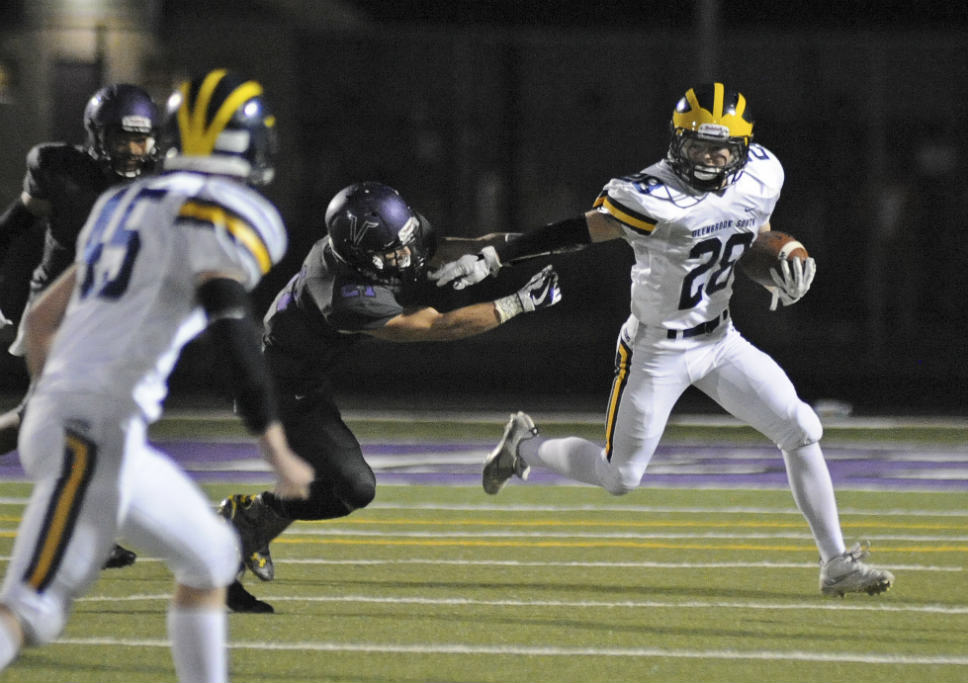 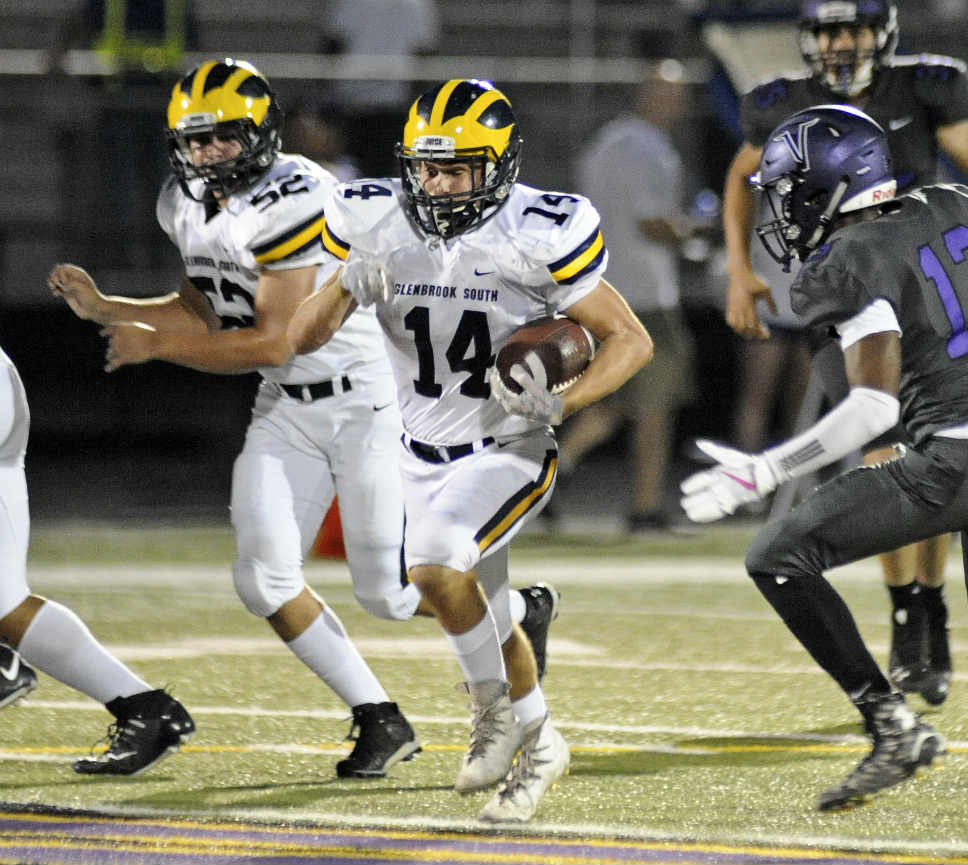 Jack Jerfita of the Titans runs through an opening. PHOTOGRAPHY BY GEORGE PFOERTNER 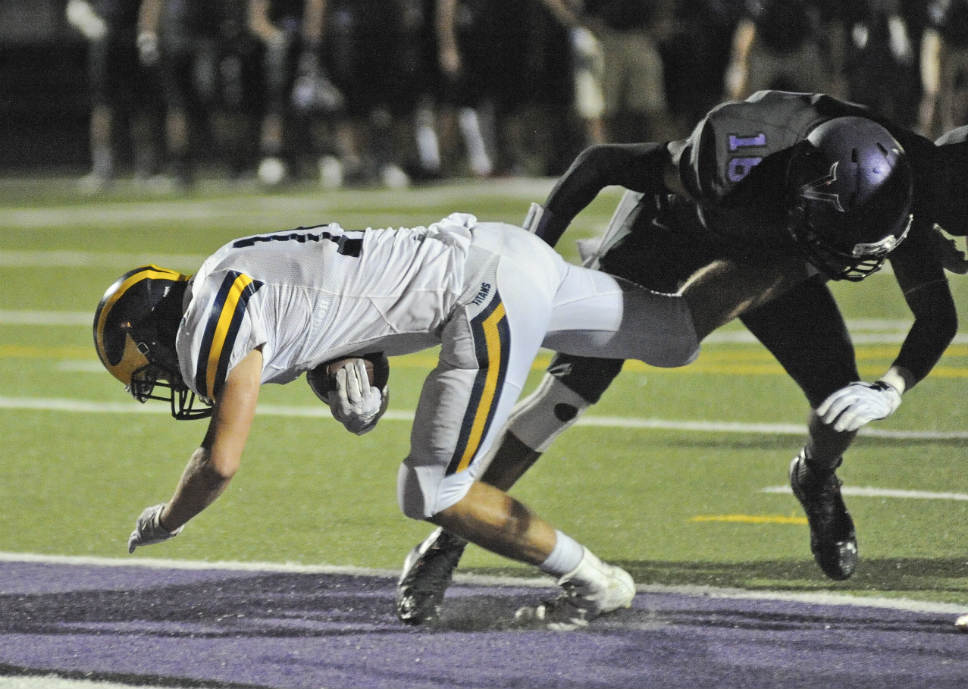