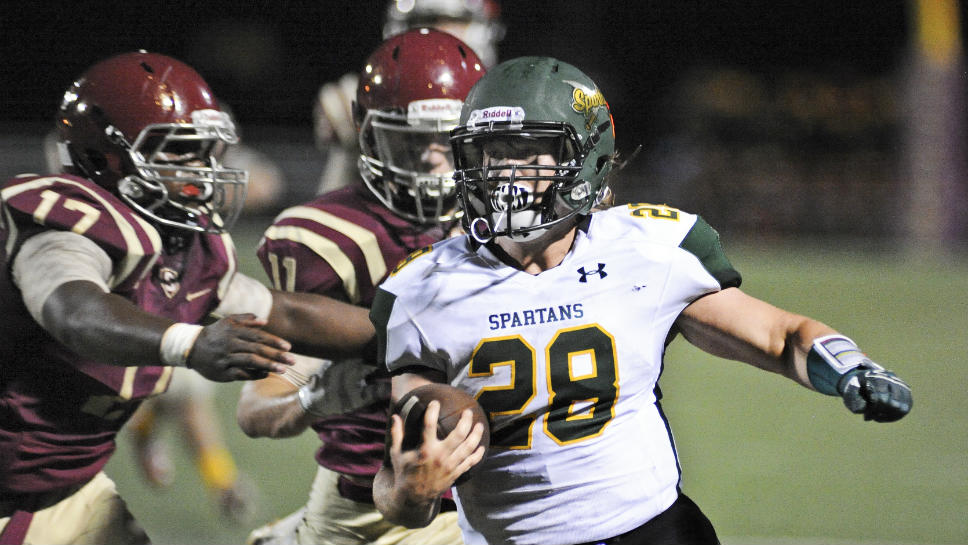 Glenbrook North’ Chris Heywood takes it up field on a quarterback keeper in a Week Four game at Schaumburg. PHOTOGRAPHY BY GEORGE PFOERTNER

The football coaches at Glenbrook North have come up with a novel idea, and it figures to stick.

There’s a good chance that this novelty — playing “rookie” Chris Heywood at quarterback — will not wear off any time soon.

By the look of things, the Spartans have their own version of The Say ‘Hey’ Kid.

It just so happens that Heywood, a baseball pitcher and outfielder when he’s not tossing around the pigskin, possesses mounds and mounds of gridiron talent.

A transfer from Loyola Academy this fall, the sturdy 5-foot-10, 210-pound Heywood has done a lot in a short time with the Spartans.

You know, he’s just your typical defensive back/running back/receiver/punter/punt returner/placekicker. Try to fit that on a business card.

And now … this. Heywood’s latest innovation went into effect, when senior quarterback Burke Morley sustained a concussion in a Week Two 24-14 win over visiting Grant.

It looks like the highly athletic and creative Heywood has staying power. He’s got that dual-threat thing going.

“It became a situation where we were looking for a quarterback who could run the ball,” said Glenbrook North’s inventive offensive coordinator, Dom Savino. “And we feel like he’s a good fit with what we want to do offensively. He can gain yardage in a number of ways: lowering his shoulder, making people miss and using his speed.

“We’ll see where this takes us,” Savino added.

Thus, Heywood was rushed into the QB position in the team’s Week Three 34-24 win over visiting Elk Grove. And he was out there again in GBN’s 26-14 setback to host Schaumburg on Sept. 15.

Entering the Elk Grove game No. 28 had never taken a snap from center.

“I’ve always been a running back and a safety,” said Heywood, one of nine children — all athletes — in the Heywood household.

But he was more than willing to break out of his comfort zone. He’s still getting the playbook down; still figuring out the passing routes and blocking schemes.

“The more he grasps the offense the better we will be,” the head coach added.

Heywood showed flashes in the game at Schaumburg.

In GBN’s second series of the night, he showed his dangerous side. He gave the Saxons’ defensive unit pause, when he faked a handoff to Jimmy Karfis and ripped off a 31-yard gain up the middle on a zone read.

“Having Jimmy back there with me keeps defenses on their toes,” said Heywood. “He’s capable of breaking off a 60-yarder at any time.”

And then, Heywood did some nice quarterback things. First, he completed a 10-yard sideline pass to Davu Keels on 4th-and-6.

“Davu has crazy-good hands,” said Heywood. “You just have to get the ball somewhere near him, and he’ll make every effort to come down with it.”

Three plays later, the Heywood-Keels show continued, when the two playmakers collaborated on a 12-yard first-down pass on 3rd-and-8.

Heywood then capped off the drive with a one-yard quarterback sneak.

GBN’s final series of the first half was part substance, part style.

Thanks to an 18-yard carry by Karfis, an 11-yard run by Heywood and a 21-yard reception by Ethan Quayle on a crossing pattern, GBN went from its own nine-yard line to the Schaumburg 37 in swift fashion (5 plays).

And then … this happened.

Full disclosure: When the play call came in, Karfis had his doubts.

“When I heard it, I thought, ‘Well, let’s just see how this goes,’ ” said the Glenbrook North running back.

How about … unbelievably well?

On a 1st-and-10 call, the Spartans did something bold, daring and delectable. Karfis took a handoff from Heywood, faked a run and flipped a short pass to Heywood.

So much for uncertainty.

Heywood took it to the house. He busted a tackle, got blowout blocks from Cardenas and Andrew Koulogeorge, and then high-horsed it down the left sideline.

“That’s something that Coach Pieper wanted to run,” Savino said. “We put the ball into the hands of our two best athletes. Things don’t always work out the way you draw it up. But sometimes, it does. Those guys obviously rose to the occasion.”

“We always have some stuff in our bag of tricks,” said Pieper.

But GBN was unable to build on that momentum after intermission. The Saxons (3-1) instead got the spark they needed, when Hez Trotter returned a punt 83 yards for a touchdown with 5:56 left in the third quarter.

“The first and third quarters were not good quarters for us,” said Pieper. “We’ve got to be able to put a full game together.

“But, everything we did wrong tonight can be fixed,” he added.

In the meantime, the Pieper and Savino believe that Heywood will continue to master the intricacies and nuances of the quarterback position.

This much is for sure. He’s got the arm for the position.

Last spring, Heywood was a member of the Loyola pitching staff. In 23 innings of work, he went 2-2 with a 3.04 earned run average.

Being able to paint the corner no doubt was one of his selling points.

“I think that was part of it,” said Heywood. “That was to my advantage.”