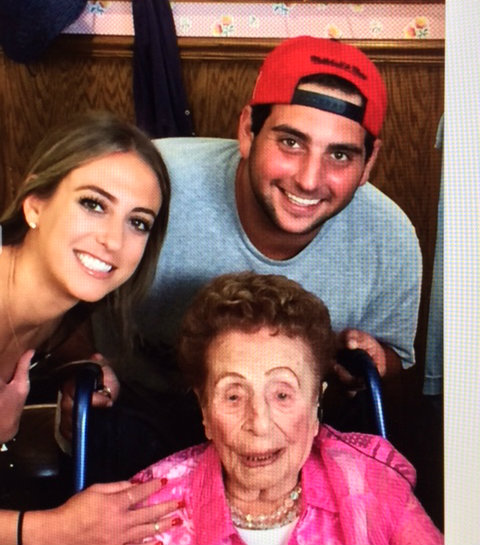 HIGHLAND PARK – After the birthday girl blew out the candles on her cake at Country Kitchen, Lillian Norris’ grandson Max Norris lovingly looked at his grandma and said, “Nana, you’re 110, you look great, you’re smart and with it. How do you do it?”

And she replied, “I don’t know. I guess I’m just durable.”

“Durable” is an understatement, as Lillian finally agreed to have live-in help when she turned 104.

Lillian’s daughter Paula Fagel said her mom lives in a condo with a wonderful caregiver in Lincolnwood.

Lillian has two children, Fagel and Donald Norris M.D., six grandchildren (one deceased) and 15 great-children. Her oldest great-granddaughter will be 27.

“I’m so excited to have such wonderful children that produced beautiful grandchildren and great-grandchildren,” said Lillian as she gazed at all of the smiling faces of the four generations of family members celebrating her milestone birthday at her favorite restaurant.

Lillian’s daughter-in-law Judy Norris said the family has been coming to Country Kitchen in Highland Park for many years, and her wonderful caregiver has been taking her there almost every other Sunday whenever the weather is nice.

“Lillian said the other day how flattered she is that owner Peter Dimitriou comes over and kisses her,” said Norris.  Owners Dimitriou and his daughter Ruby Iliopoulos have always made a special effort for their longtime customer.

“When Ruby found out Lillian was going to be 110, she graciously offered  to get a huge cake to serve in the restaurant in honor of her birthday,” she added.

Fagel explained that her mom was born in Lithuania in 1907, the first year the Cubs won back-to-back World Series Games, and came to Chicago when she was a toddler. Lillian’s kid sister is 105, but sadly, she doesn’t get out much.

Years ago her sister would drive her on outings including frequent visits to a nearby McDonald’s, as Lillian’s day as a motorist was short-lived.

“My mother learned how to drive and the first day she got her license, she smashed into a tree,” said Fagel. “My father said that’s it, and she never got behind the wheel again.”

Norris has high praise for her mother-in-law’s caregiver, who takes her to the beauty shop for manicures, and anywhere she wants to go. She also cooks for her.

“Lillian loves getting out, has a lot of energy, her brain is functioning and she’s really amazing,” said Norris.

Norris noted that Lillian takes pride in her appearance and always wants to look her best. She feels the same way about her loved ones.

“Today she told me that my hair finally looks good,” said Norris after a recent haircut.  Norris agreed that as long as her mother-in-law continues to criticize her, she knows that she’s doing well.

Norris said Lillian’s devoted family sees her at least once a week, and her mother-in-law has always been wonderful to Judy. “When my husband was in Vietnam, she did everything for me, She came out and took care of the children. She took a streetcar from Chicago to get to my house in Skokie,” she added.

Norris recalled that Lillian was 92 when her grandson was in the hospital in New York, but she still accompanied Norris on the flight to visit him. She brought lox and bagels to the hospital to help celebrate his 30th birthday, and later climbed many stairs with Norris, as they walked around New York City.

“My mother-in-law never complained, and her attitude toward her health has always been very positive,” said Norris.

Lillian worked during the Depression as a sales person at Fair Department Store in Chicago, and she also worked as an accountant. Lillian continued to work there after many employees were fired, and she learned to become a lifelong saver.

“She always had enough room in her heart to give the kids presents even when they couldn’t afford them and worked hard to put money aside to leave to her children and grandchildren,” said Norris.. “We’ve never had to support her.”

Lillian and her husband were married for more than 60 years before he passed away at 85.

Norris said Lillian has had a remarkable life and she’s at every function whether she wants to be there or not. “I hope this leaves an impression, because she deserves to be in the paper before her obituary,” she added.

Lillian’s granddaughter-in-law Rina Norris remembered going out for lunch with Lillian when she was in her 90s. She ordered a sandwich, so Rina Norris asked if she’d like fries and Lillian said no, because she didn’t want to gain weight.

Rina Norris said Lillian was her biggest cheerleader when she was dating her grandson and told her to wait patiently and he would propose soon.

“Lillian was the matriarch of the family, a wonderful cook, and had all of the holidays,” said Rina Norris. “Before her eyes started failing her, she read books and was up on current events. She’s still sharp, and we’re all so happy to have her with us.” 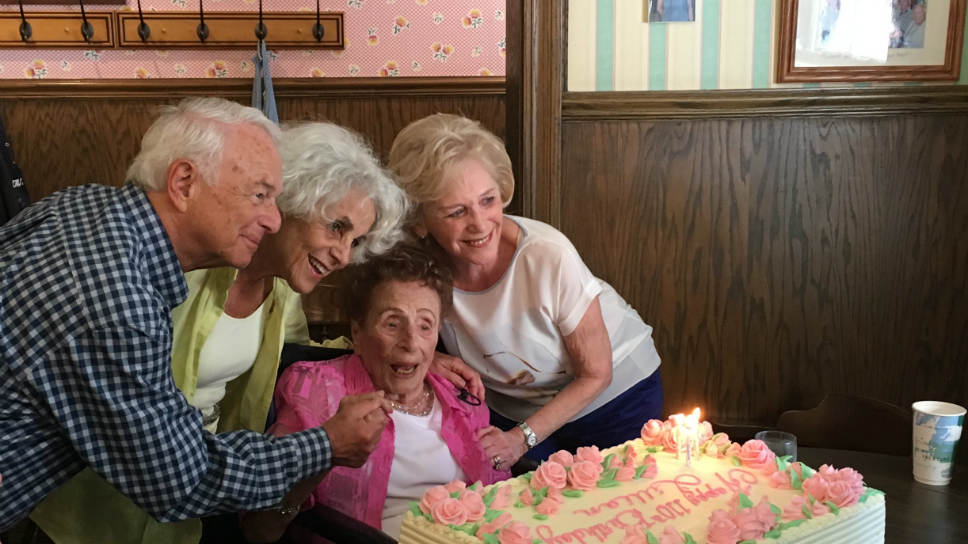