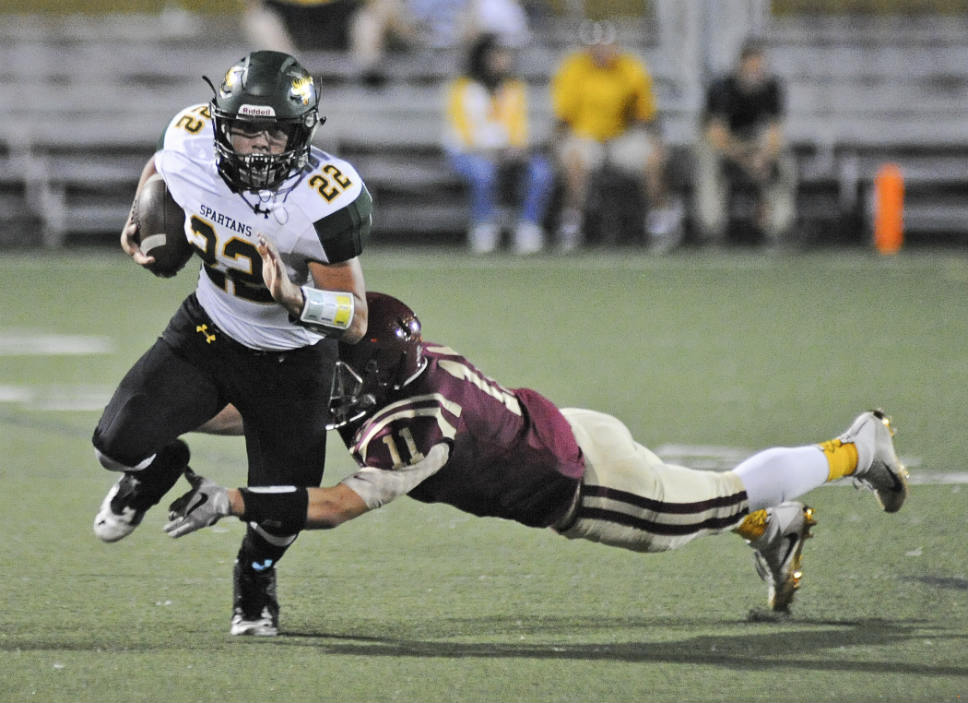 When the play call came in, Jimmy Karfis had his doubts.

“When I heard it, I thought, ‘well, let’s just see how this goes,’ ” said the Glenbrook North running back, following his team’s 26-14 setback to host Schaumburg on Sept. 15.

How about … unbelievably well?

With under two minutes left to play in the first half of this Week Four football game, Karfis the running back turned into Karfis the quarterback.

On first down and 10 at the Schaumburg 37, the Spartans did something bold, daring and delectable. Karfis took a handoff, faked a run and flipped a short pass to quarterback Chris Heywood.

So much for uncertainty.

Heywood took it to the house. The 5-foot-10, 210-pound senior busted a tackle, got a blowout block — maybe even two — from Nicolas Cardenas and high-horsed it down the left sideline.

“We always have some stuff in our bag of tricks,” said GBN head coach Bob Pieper.

But GBN was unable to build on that momentum after intermission. The Saxons (3-1) instead got the spark they needed, when Hez Trotter returned a punt 83 yards for a touchdown with 5:56 left in the third quarter.

“The first and third quarters were not good quarters for us,” said Pieper. “We’ve got to be able to put a full game together.

“But, everything we did wrong tonight can be fixed,” he added.

Schaumburg is an explosive team. On the third play of the game, Deontae Arnold scored on a 60-yard quarterback keeper. Then, on the second play of Schaumburg’s second series, Trotter galloped into the end zone from 51 yards out.

Notable: He made up for it. GBN tackle Nicolas Cardenas was pretty irked, when he allowed Schaumburg defensive lineman Joe Jamison to beat him on the edge and sack quarterback Chris Heywood for a fumble and 30-yard loss with four minutes left in the second quarter. But to his credit, Cardenas, a senior captain, did not give up on the play. He regrouped quickly and wound up saving a touchdown by tackling Jamison at the GBN 11-yard line. Schaumburg ended up not capitalizing on the turnover. Two plays later, GBN’s Kyle Williams recovered a fumble. “Nice hustle by [Cardenas],” said GBN head coach Bob Pieper. “He made a mistake and then he made up for it.” “There was a miscommunication with my guard,” said Cardenas. “I take responsibility for it.” … Ethan Quayle tried to spark his team. He returned the second-half kickoff 39 yards to give GBN great field position. He also made two catches for 54 yards. … The element of surprise was in effect, when GBN successfully converted an on-side kick immediately after its first score. Andrew Pollina’s kick was recovered by Luke Frishman. … Davu Keels had a terrific night catching the football. His best reception came on the final drive of the game, when he snagged an acrobatic 19-yard sideline pass from backup quarterback Ben Foster. … The swimmer is the center. Junior Ryan Purdy, son of assistant head coach Matt Purdy, does the snapping for the Spartans. Last winter, as a sophomore, he went to state in three events: 200-yard freestyle relay, 400 free relay and 500 free. 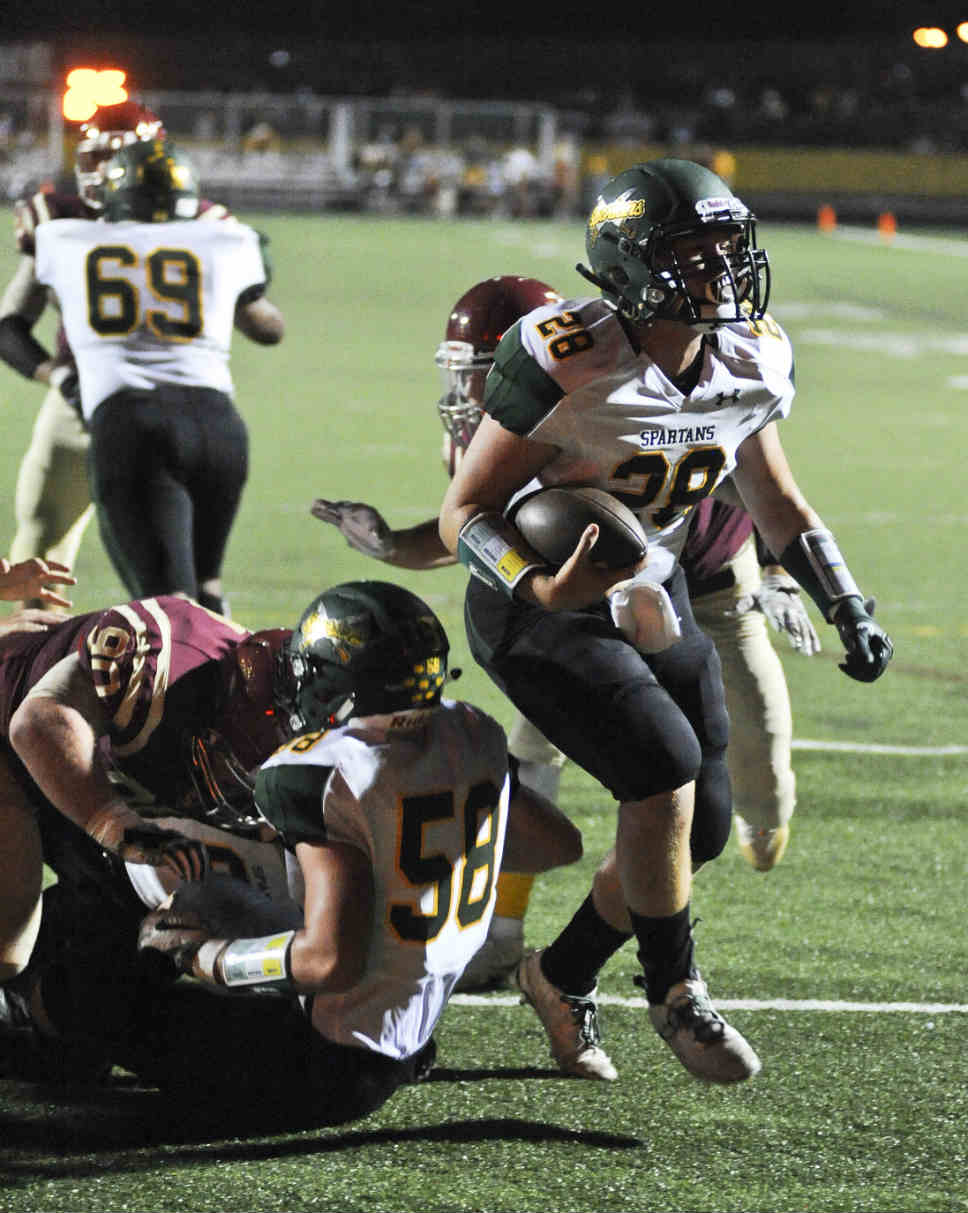 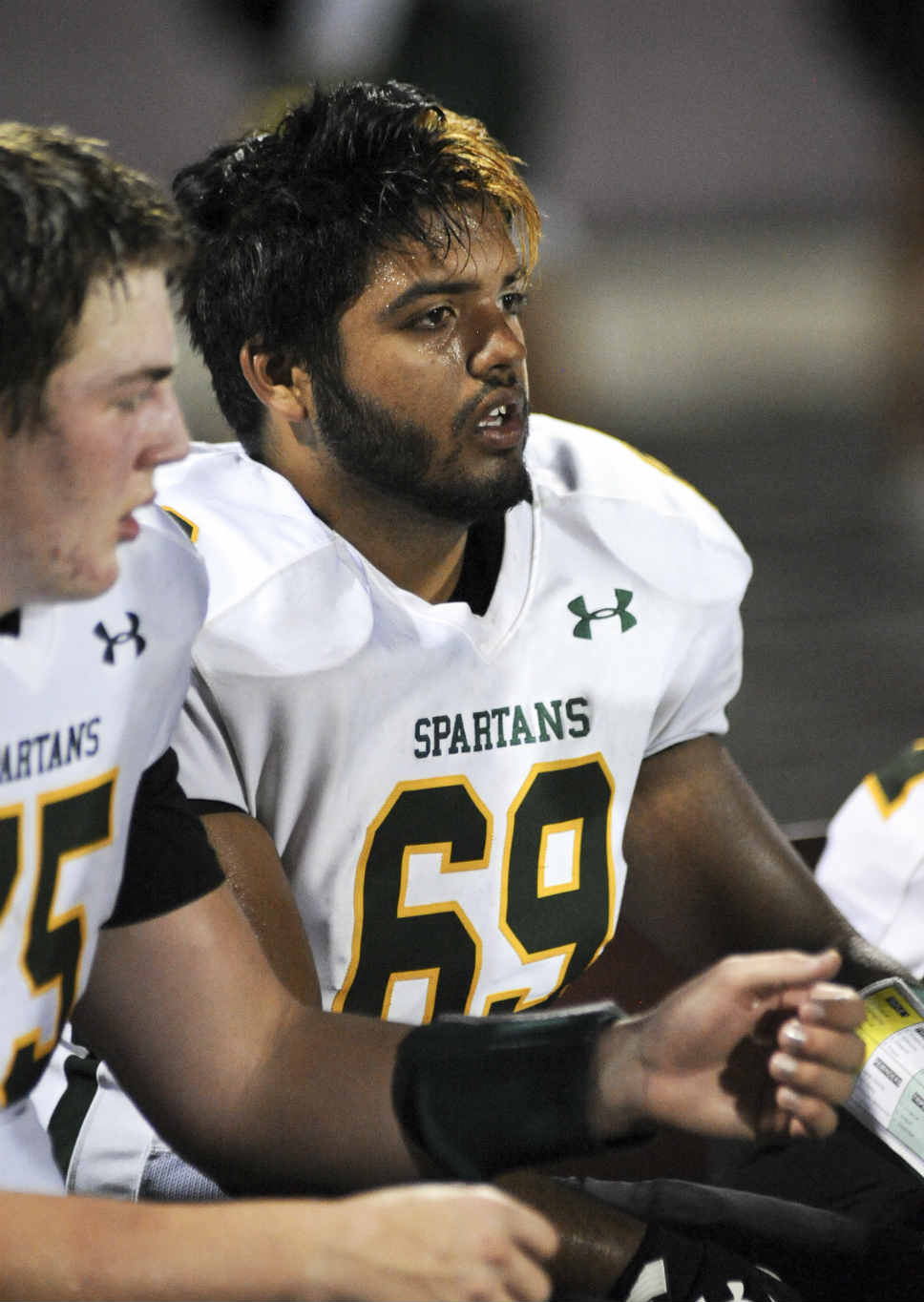 GBN offensive linemen Nicolas Cardenas (No. 69) and Nick Mantis take a breather during the Schaumburg game. PHOTOGRAPHY BY GEORGE PFOERTNER 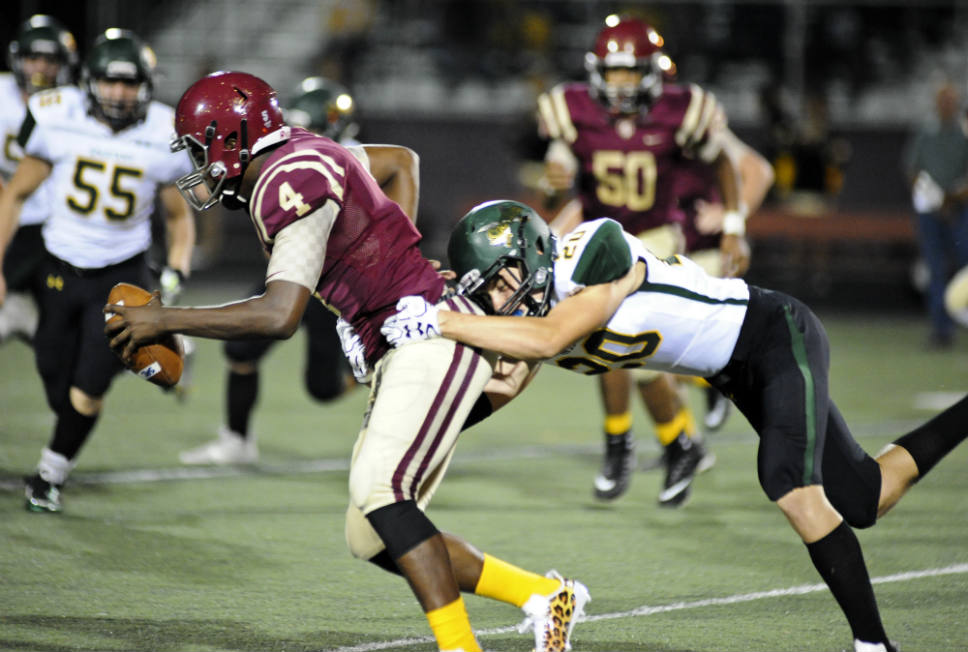 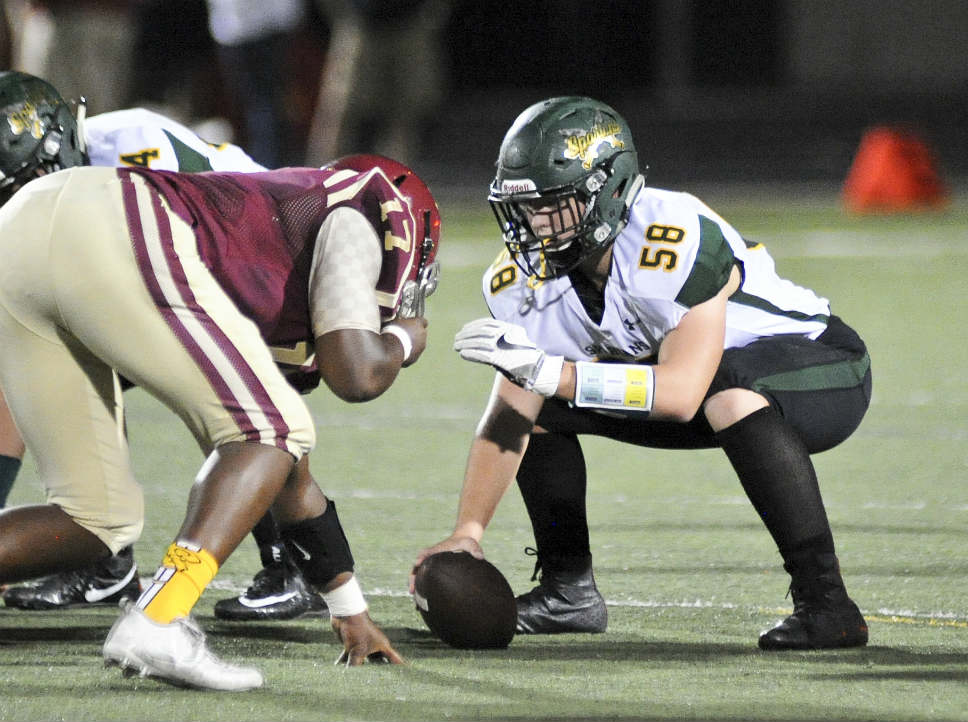 Junior center Ryan Purdy gets ready to snap the ball during game against Schaumburg. Purdy qualified to the state swim in three events last winter. PHOTOGRAPHY BY GEORGE PFOERTNER