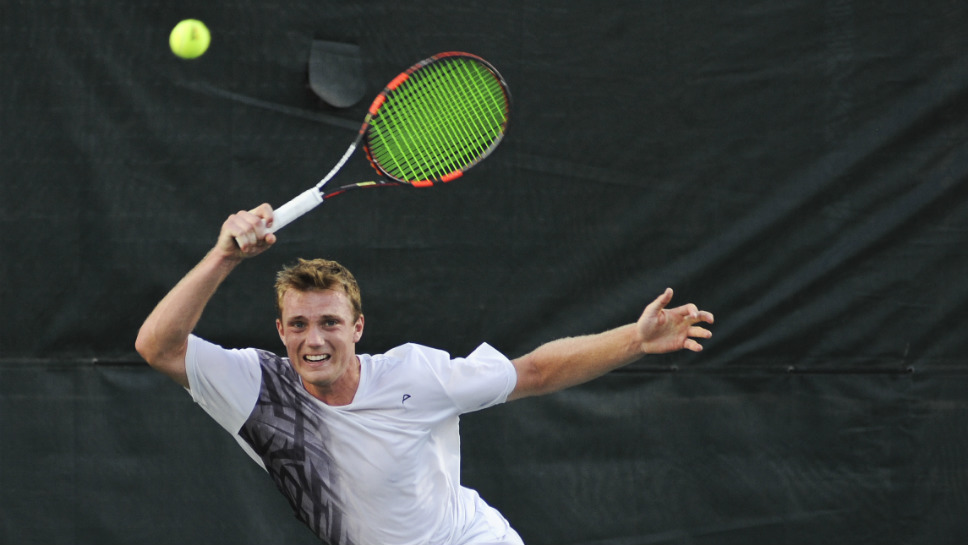 Tom Fawcett rips a forehand during action this summer at the Challenger Tournament in Winnetka . PHOTOGRAPHY BY GEORGE PFOERTNER

The reigning PAC-12 Player of the Year earned more than just the top trophy at the tournament after edging recent University of Arkansas graduate Michael Redlicki 7-6, 6-7, 6-4 in the final on Sept. 9.

One day before 6-foot-8 Kevin Anderson, of South Africa, lost in straight sets to Spain’s Rafael Nadal in the men’s final of the U.S. Open, the 6-6 Fawcett downed the 6-8 Redlicki in a two-hour-17-minute match at the USTA Billie Jean King National Tennis Center.

The Winnetkan and 2017 All-American had advanced to the final with a 6-1, 6-2 semifinal rout of University of Florida sophomore Alfredo Perez on Sept. 8.

“It’s been a joy to work with Tom,” Stanford men’s tennis coach Paul Goldstein told The North Shore Weekend earlier this summer. “His work ethic stands out more than anything else does. His serve … it’s such a weapon. And he moves quite well for a player his size.”

Fawcett, a freshman at New Trier in 2010-11, finished runner-up in doubles (with Drew Campbell) at the 2011 IHSA state tennis tournament; Redlicki placed fourth at state in singles in his freshman season (2009) at Lake Zurich High School and won USTA National Hard Court and Clay Court singles championship in the summer of 2011.

Fawcett ended his junior season at Stanford with the No. 11 singles ranking in Division I; Redlicki, who started his collegiate tennis career at Duke University, was ranked 12th.