WINNETKA – For Winnetka resident Brad McLane and the august Sheridan Road house known as the Wayside, it was love at first sight. The 19th century home, once occupied by Henry Demarest Lloyd, a socialist-bent reformer and muckraking Chicago Tribune journalist who exposed abuses of industrial monopolies, is included on the National Register of Historic Places. McLane, who had lived with his family for 18 years on Provident Avenue, passed it on his running route.

“It’s not often you get the chance to live in a unique, beautiful house like this,” McLane said. So when it went on the market in 2013, he purchased it.

The name Wayside is ironic, because when McLane bought the house, he discovered it came with an unexpected treasure that itself had fallen by the wayside; a statue at the northwest corner of Sheridan Road and Lloyd Place commissioned from sculptor Charles Oscar Haag. That statue was unveiled in 1914. Its official name is Cornerstone of the Castle, and it depicts a “dejected worker,” according to the book, American Sculpture in the Metropolitan Museum of Art.

McLane and his family call the statue Everyman. 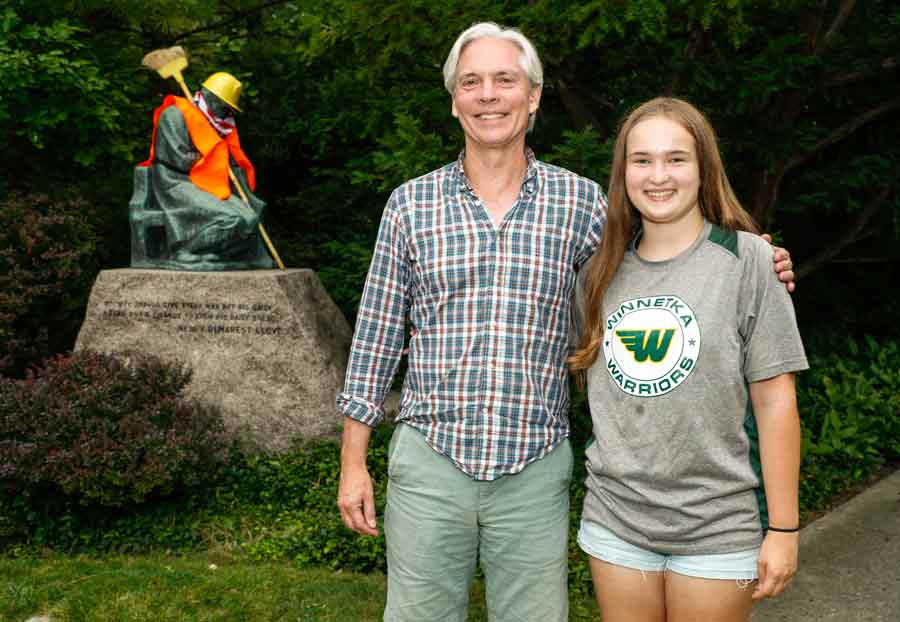 Brad McLane and his 13- year-old daughter Elizabeth with the Haag Statue at the corner of their home at Lloyd Place and Sheridan Road in Winnetka. Elizabeth’s Halloween costumes were Everyman’s first outfits. PHOTOGRAPHY BY JOEL LERNER/JWC MEDIA.

On the statue is this inscription: “No tenements for some and castles for others … Society should give every man not his daily bread, but a chance to earn his daily bread … All property is property of man.” 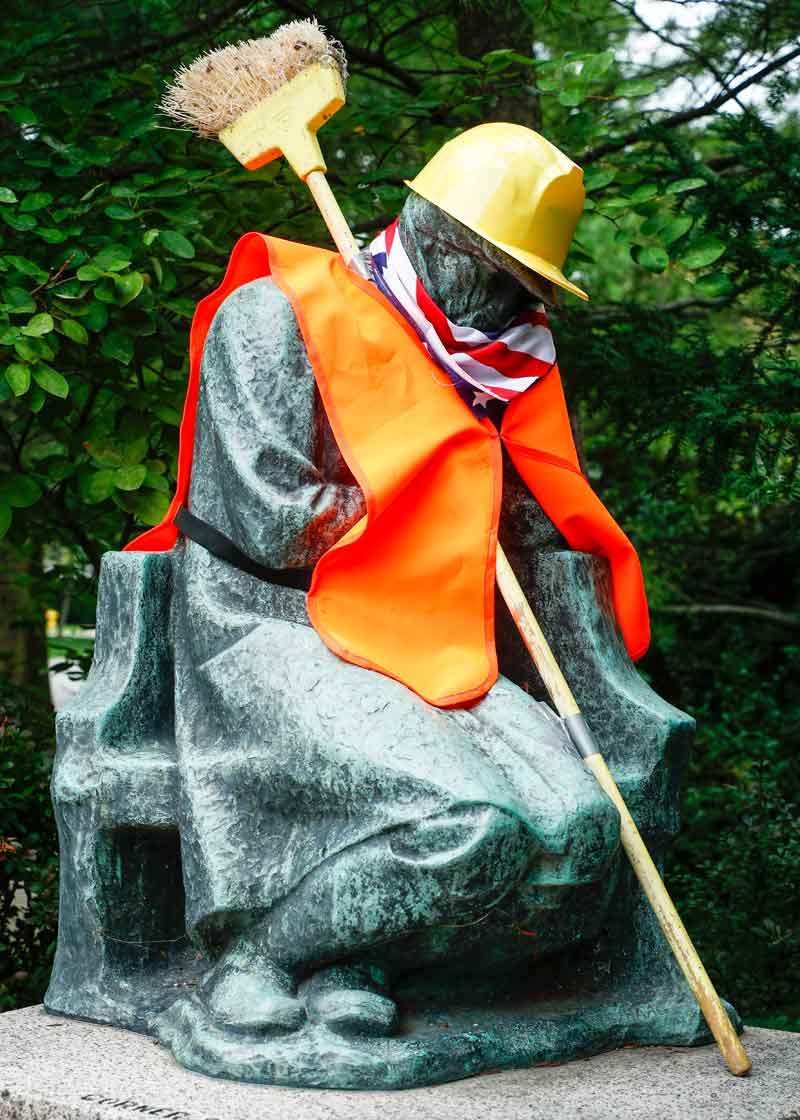 Dressed and ready for work: the Haag statue at the Lloyd House in Winnetka. PHOTOGRAPHY BY JOEL LERNER/JWC MEDIA 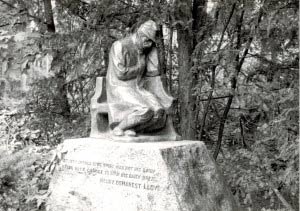 The statue and the ground upon which it sat belonged to the state of Illinois, which was responsible for maintaining it, according to documents McLane found. “It was all overgrown and decaying,” he said. “They were not in compliance. I went to the state and their reaction was, ‘We own what?’”

McLane asked if they wanted him to bill the state for maintenance or if they just wanted to deed him the land and the statue. The state chose the latter option, and under the care of McLane and his family, Everyman has emerged as something of a cult celebrity in the community. Drivers along Sheridan Road may crane their necks to get a glimpse of the statue, which the family whimsically decorates to commemorate holidays or special events. In anticipation of Labor Day, the statue is bedecked in a construction zone vest and hardhat.

Lloyd bought the house in 1878. Built two decades earlier, it was originally the Wayside Inn and located on the Winnetka shoreline. According to Arlynn Leiber Presser’s pictorial history, Winnetka, the community, while affluent, “still maintained a forward-thinking attitude.” The Wayside Inn hosted meetings by activists and community organizers.

Lloyd described himself as “socialist-anarchist-communist-individualist-collectivist-cooperative-aristocratic-democrat.” In 1881, he wrote “The Story of a Great Monopoly” for The Atlantic Monthly. The issue containing the controversial expose of the Standard Oil trust sold out seven printings, and the article is credited with moving antitrust legislation to the forefront of national debate, paving the way for the Sherman Antitrust Act of 1890, the magazine stated in 1999.

Lloyd’s son William joined the Socialist Party in 1906. He ran unsuccessfully for an Illinois Senate seat in 1918. Two years later, he and 38 others were indicted for sedition. In 1922, he served eight days in prison. He would later shift to the Republican Party.

The McLanes’ first forays into decorating the statue were modest. Once the covering vegetation had been trimmed back, the brooding figure “looked lonely,” McLane said. Shopping at Grand Foods during the winter holiday season, he asked to borrow one of their Christmas stocking decorations for Everyman.

“It looked perfect,” he said. “I took a photo and sent it to the Grand. And then (the family) said, ‘Let’s think about other holidays.’”

A top hat for the New Year and Mylar balloons for Valentine’s Day followed. Daughter Elizabeth, 13, was very involved with decorating the statue until she became busy with school and hockey (two other family members, Emily and Connor, live in France and Boston, respectively).

A turning point for the statue was when, unbeknownst to the family, it was designated a PokeStop when Pokemon GO was all the rage. “Kids started riding up on their bikes,” McLane said with a laugh.

Now, neighborhood children offer decorating ideas for Everyman, such as a Pilgrim theme for Thanksgiving. Recently, a bike helmet was purloined from Everyman’s head. When McLane posted on a Winnetka community website a tongue-in-cheek request for its return in Everyman’s words (“I am sad”) an anonymous donor replaced the helmet within 24 hours.

“People say it’s fun, no one is critical,” McLane said.

The family is already looking ahead to Halloween. Ironically, considering Lloyd’s activism, they have done nothing concerning politics or elections. 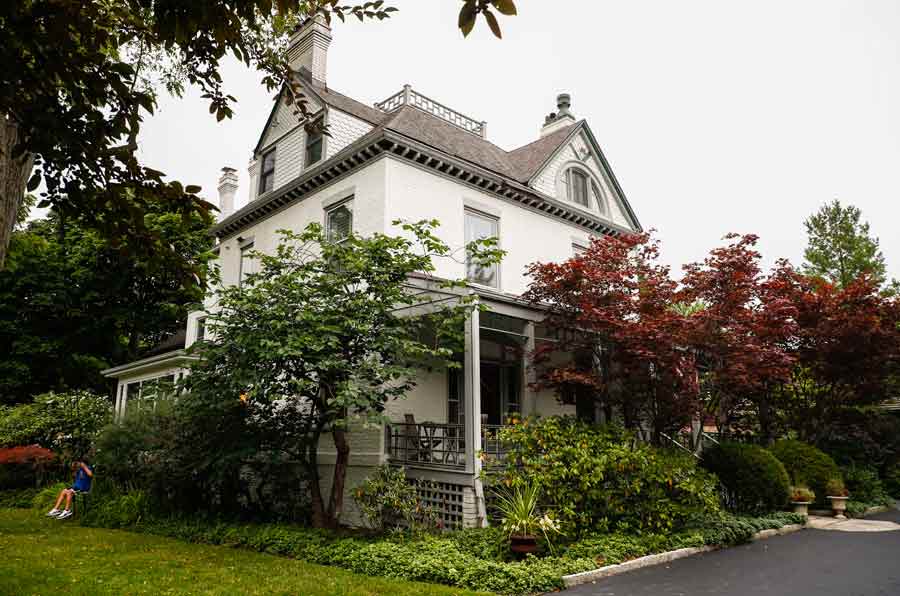 Everyman is in front of The Lloyd House, lovingly owned by the McLane family of Winnetka. PHOTOGRAPHY BY JOEL LERNER/JWC MEDIA