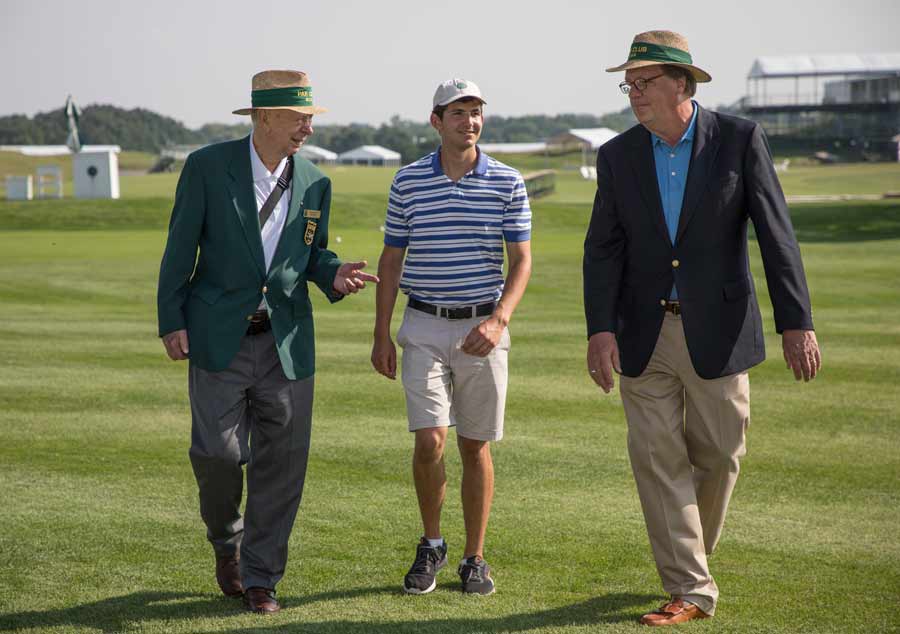 LAKE FOREST — As tens of thousands of people descend on Lake Forest in September for the BMW Championship, they will have the opportunity to watch many of the top professional golfers in the world such as Jordan Spieth, Dustin Johnson and Rickie Fowler.

Spectators will also be helping approximately 900 young people a year, all of them caddies, attend college.

All proceeds from the tournament September 14-17 at Conway Farms Golf Club in Lake Forest go to the Evans Scholars Foundation covering tuition and housing for current and future Evans Scholars, according to the Western Golf Association website.

The scholarship is need based but also requires a good academic record as well as a demonstration of work and leadership ability shown while caddying. More than 10,400 people received their college education with the help of an Evans Scholarship, according to the website.

Roger Mohr of Lake Forest, who received his college education as an Evans scholar at Marquette University in Milwaukee from 1949 to 1953, said the average grade point average of a scholar today is 3.2 on a four-point scale. The graduation rate is 95 percent. He has remained active in the organization ever since he graduated.

Mohr, Alderman Tim Newman and 2017 Lake Forest High School graduate Mark Rinaolo are Lake Forest residents who have all embraced the meaning of what the opportunity of an Evans Scholarship means.

When it looked like donations from members of the WGA and tournament proceeds might not be enough to fund scholarships for all the worthy caddies, Mohr started the organization’s endowment in 1989 to assure the programs future. The endowment is worth $84 million today.

A former alderman and a co-winner of the city’s annual Lawrence R. Temple Distinguished Service Award for 2015, Mohr said his Evans Scholarship is largely responsible for the success he has achieved in his 85 years. He shared the prize with his wife, Pauline Mohr.

College was not even a thought in Mohr’s mind in his early teens in the 1940s. He said his father died when he was young and his family was hard hit in the depression. He caddied at the Milwaukee Country Club to help his family make ends meet.

Eventually Mohr became an advertising executive in Chicago rising from an announcer for radio spots to president of the agency. He said he has donated the value of his scholarship to the organization many times over. He said to him it is an ongoing obligation and pleasure. He is not alone. So has Newman, who graduated from Purdue University in 1976.

“You are always an Evans Scholar,” said Newman. “I never would have gotten the education I did without it. I have always donated. I’ve given back my scholarship several times over.”

Growing up in Decatur, Newman said he caddied at the Country Club of Decatur partly to get himself closer to golf and play on Mondays. Then he found out about the Evans scholarship and it changed his life. He had some opportunities to go to some small schools and play basketball but those offers were not as all inclusive as the Evans.

Newman did play basketball for the Boilermakers for two years but said he was not wedded to the team like most scholarship athletes are today because he was an Evans Scholar.

“I had a Chick Evans scholarship so I didn’t need one for basketball,” said Newman. “It wasn’t like today where they own you but it was still a big commitment. I was on my own and was able to do other things.”

After graduating from Purdue, Newman earned a master’s degree from DePaul University in both finance and taxation. He eventually moved to Lake Forest with his family and has been a financial advisor since 1998. He also got involved in the community.

Newman Gets Involved in Civic Affairs

Newman joined the caucus and eventually served six years on the Plan Commission before joining the Lake Forest City Council. He continues his involvement with the WGA and Evans Scholars.

Rinaolo began caddying at Conway Farms in 2014 because, like Mohr before him, his family needed the money. He said they incurred financial losses during the Great Recession, had to move “across town,” his mother had to work longer hours and he caddied to help out.

“On my first day they said you could get a scholarship, said Rinaolo adding he knew nothing of the scholarship when he took the job. “When I got home I researched it and found out about the Evans. I decided right away I was going to go for it.”

Rinaolo will start his freshman year at Northwestern University in September planning to major in biology at this point and take all premed requirements. Also an Eagle Scout, Rinaolo said that experience taught him about service and leadership. He is primed to follow in the footsteps of Mohr and Newman.

“I know I’ll need more education. I would like to do Doctors Without Borders. Giving back is an obligation in life. If it were not for the Evans caddying would have been just another summer job,” said Rinaolo. “I would like to do that too,” he added when he learned Mohr and Newman have donated the value of their scholarships and then some.