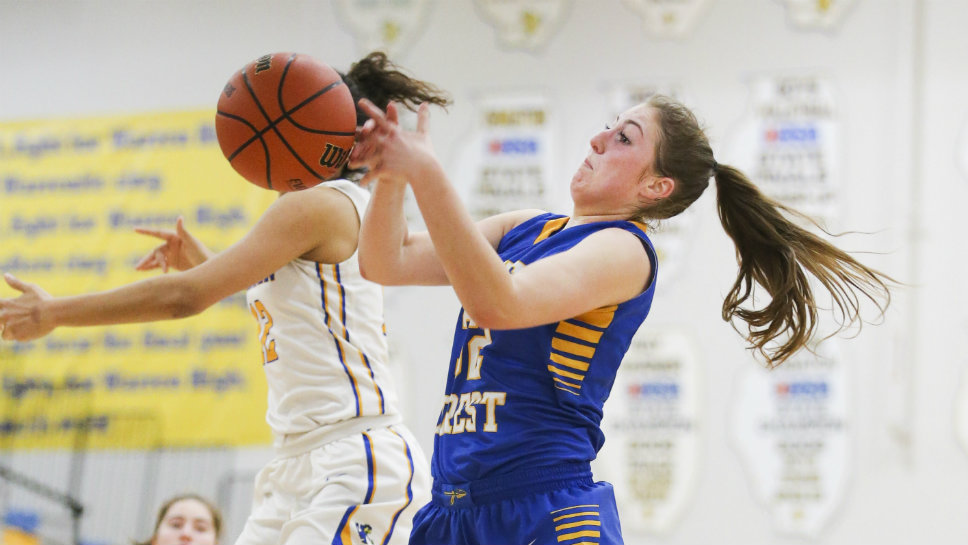 Maeve Summerville of the Scouts goes for a rebound during regional action last winter. PHOTOGRAPHY BY JOEL LERNER

Lake Forest High School’s all-time leading rebounder, Maeve Summerville, sustained a dreaded ACL tear in the summer and will be out for an extended period of time.

“I’m hoping to be back by January,” said Summerville, who has grabbed 769 rebounds in three varsity seasons.

The three-year starter, who helped the Scouts to 23 wins and a Class 4A regional title last season, also ranks second in career blocks (157), second in career three-point field goals made (111) and fifth in career scoring (879 points).

The 6-foot-1 Summerville, who plays her club basketball with ALL IN Athletics, incurred the injury during tournament action in July.

“Bad news in July, that’s for sure,” Lake Forest head coach Kyle Wilhelm said. “It’s tough to lose a player of her caliber.”

Summerville, a fun player to watch, was on pace to finish her career with the Scouts with 1,000 points and 1,000 rebounds.

“She’s a player with a ton of value,” added the coach. “Prior to the injury, she had improved in a lot of aspects of her game, especially offensively.”

“Maeve’s a tough kid,” said Wilhelm. “She will do everything possible to come back and play this season.”

Summerville, a two-time all-NSC selection, has been a fierce rebounder and shot blocker. She became the Scouts’ all-time leading rebounder last winter, eclipsing Grace Torkelson’s mark of 755. Her three-year total in blocks is second to Sarah Spain’s 218.

Summerville, who still has aspirations of playing basketball in college, also has been one of the school’s best three-point shooters. She is one three-pointer shy of tying Janie Hodgkinson’s school record (112).

“It [probably] won’t be one player stepping up and picking up the slack for her,” Wilhelm said. “It will be a collective effort.

“We’re fortunate to have a lot of quality players coming back this season,” he added.

One of the returning players who had a breakout summer was sophomore point guard Halle Douglass.

Douglass, who also played her club ball with ALL IN, has received an offer from Loyola University.

“There are a ton of schools interested in her,” said Wilhelm. “A lot of people will be monitoring her progress.”