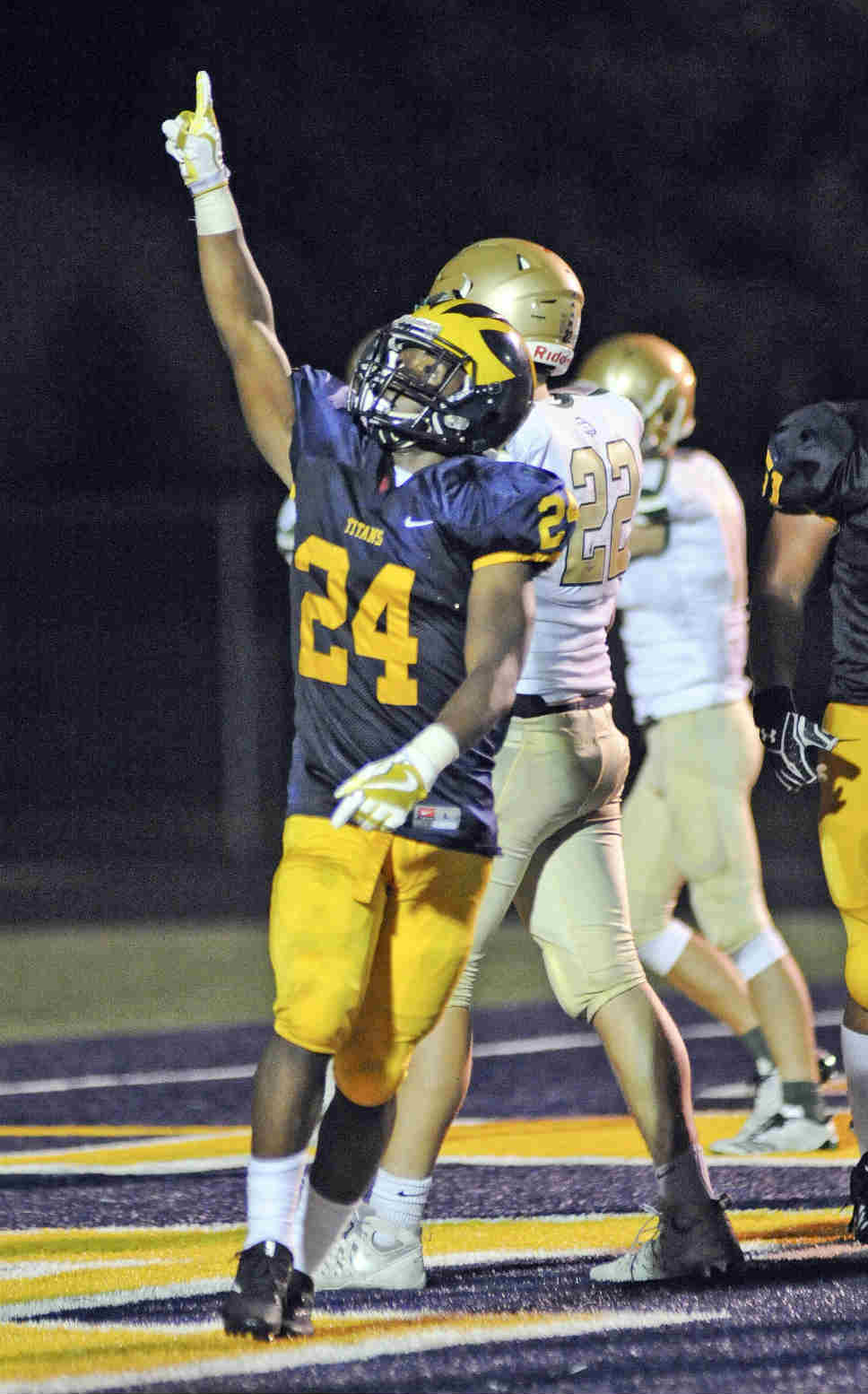 Jalen Covington of the Titans points to the sky after scoring a touchdown in the fourth quarter. PHOTOGRAPHY BY GEORGE PFOERTNER

So far, this season, running back has been a pretty fluid position for the Glenbrook South football team.

So, why not put one of your more fluid players back there?

That concept worked out unbelievably well, when the host Titans took their chances with smooth moving and highly athletic Jalen Covington and came out with a 34-21 victory over St. Patrick on Sept. 1.

“We’ve had to plug in all kinds of guys into our backfield,” said GBS head coach Dave Schoenwetter. “There’s been a lot of moving parts.”

Covington certainly was the answer in this Week Two contest.

The solidly built 5-foot-10, 180-pound senior lined up at fullback and took 15 handoffs from quarterback Jeffery Chrones. He finished with 112 hard-earned yards, including a one-yard TD run late in the contest.

“Whatever helps the team to be successful,” said Covington. “It doesn’t matter where I play. I’m all in. Fully committed.”

The offensive backfield is not unfamiliar territory to Covington.

But, based on his play from a year ago, you would expect to find No. 24 on the other side of the ball. He showed playmaker ability at outside linebacker during the 2016 campaign.

On a team which ended up 1-8, Covington produced 39½ tackles, five tackles for loss and two forced fumbles.

“Playing linebacker worked out perfectly fine for me last year,” said Covington, who had been a running back prior to his junior season. “I thought that’s where I fit.”

With junior fullback Harry Panagakis out for the season with a knee injury and fellow junior Jack Jerfita sidelined with an illness after rushing for 97 yards and two touchdowns in the season-opening win over Urban Prep/Englewood, the Titans needed someone to step up.

And step up in a hurry.

“Our running backs coach, Travis Myers, did an awesome job of getting Jalen ready,” said Schoenwetter.

Covington, who missed the season opener due to the IHSA practice rule, wound up being a difference maker against the Shamrocks (0-2). His 23-yard run helped to set up a seven-yard TD run by sophomore tailback Andrew Gall (20 carries, 88 yards, 2 TDs) with 8:06 left in the second quarter.

In the second half, Covington broke free on runs of nine, 12 and 16 yards.

His one mistake was a fumble with 2:19 left in the first half.

“I just put that behind me,” said Covington.

The night mostly was positive for Covington and Co.

Chrones turned in solid play at quarterback. He completed 9 of 14 passes for 132 yards and put the Titans (2-0) ahead 14-0 by tossing a perfect 18-yard touchdown strike to senior tight end Brandon Streb with 2:15 left in the first quarter.

“We schemed that for this week,” said Schoenwetter. “It was something that I saw that I thought could work. And it was confirmed by my coach in the press box.

“We’re trying to get Brandon more involved,” the GBS coach added. “He does a great job of blocking.”

It was a well-conceived play. Hides (3 catches, 51 yards) went into motion and darted to the right corner of the end zone before cradling in an on-target spiral from Chrones.

“That was good,” said Schoenwetter. “We were waiting to use that play. And we needed something at the time.

Beating a quality team like St. Patrick has Covington thinking — and believing.

“People doubt us,” said Covington. “But I think tonight’s win was a big turnaround game for us.”

Notable: The Titans are on a roll. Counting last year’s Week 9 win over Niles North (63-17), the GBS’s program has a three-game winning streak. … Glenbrook South’s sophomore team improved to 1-0-1 with a 27-26 win over St. Patrick. Backup quarterback Max O’Mera tossed a three-yard touchdown pass to Stevon Boyd with three seconds left in regulation. 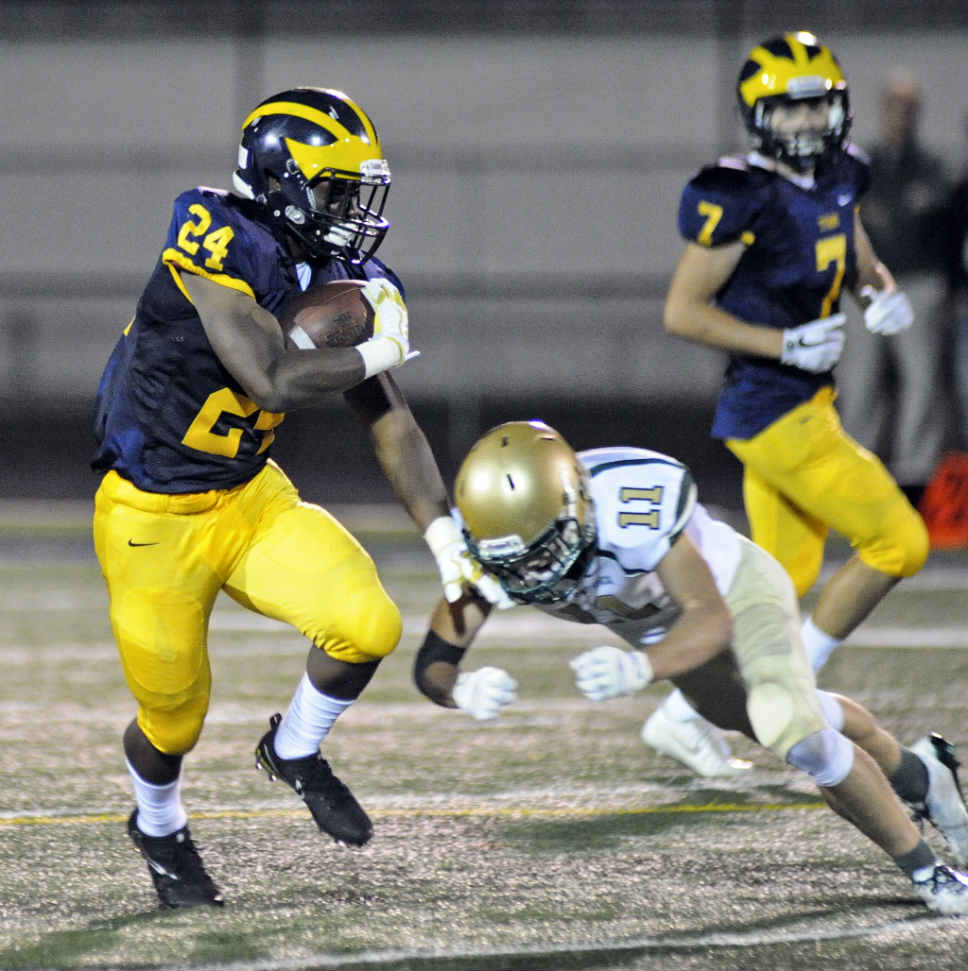 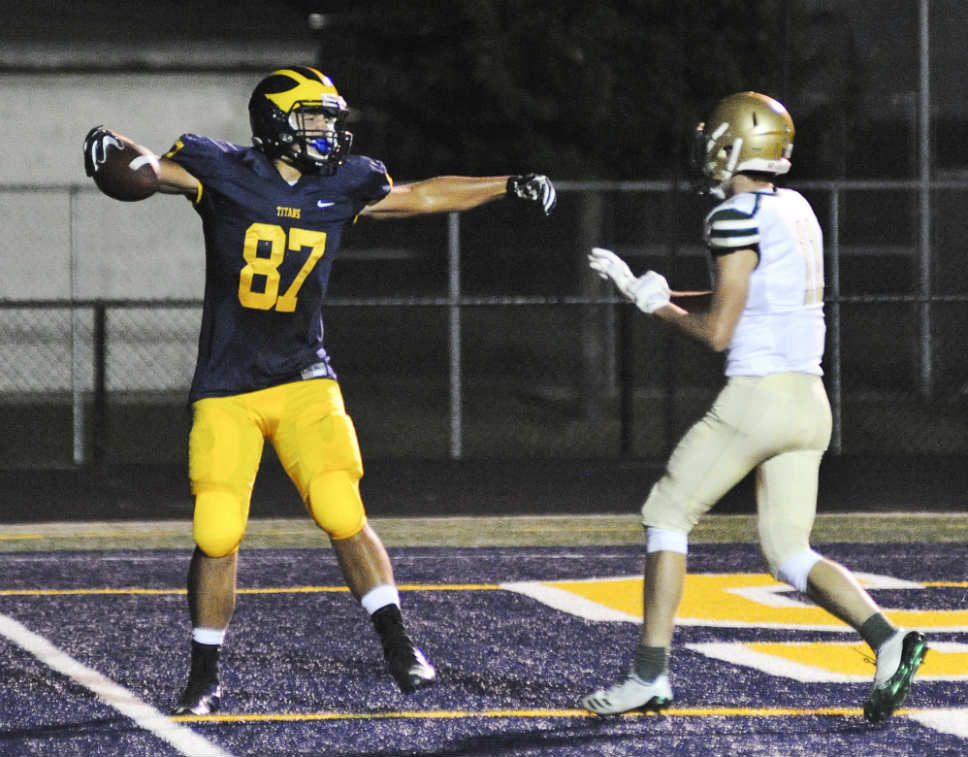 GBS’s Brandon Streb reacts after hauling in an 18-yard TD pass in the first quarter. PHOTOGRAPHY BY GEORGE PFOERTNER 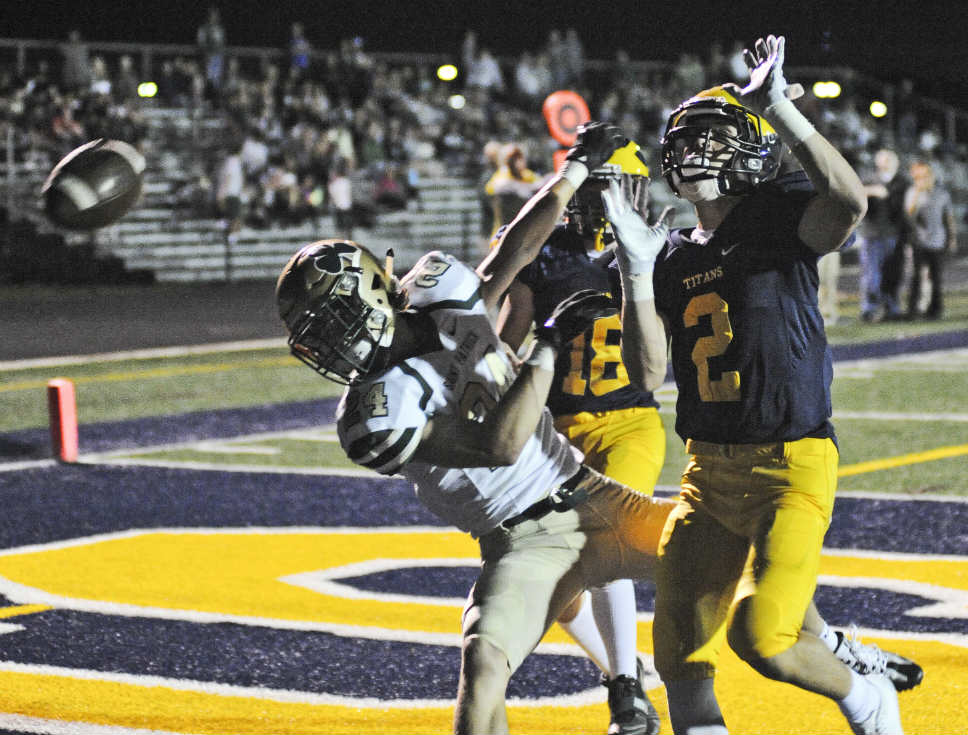 Anthony Savino (No. 2) of the Titans breaks up a pass in the end zone. PHOTOGRAPHY BY GEORGE PFOERTNER 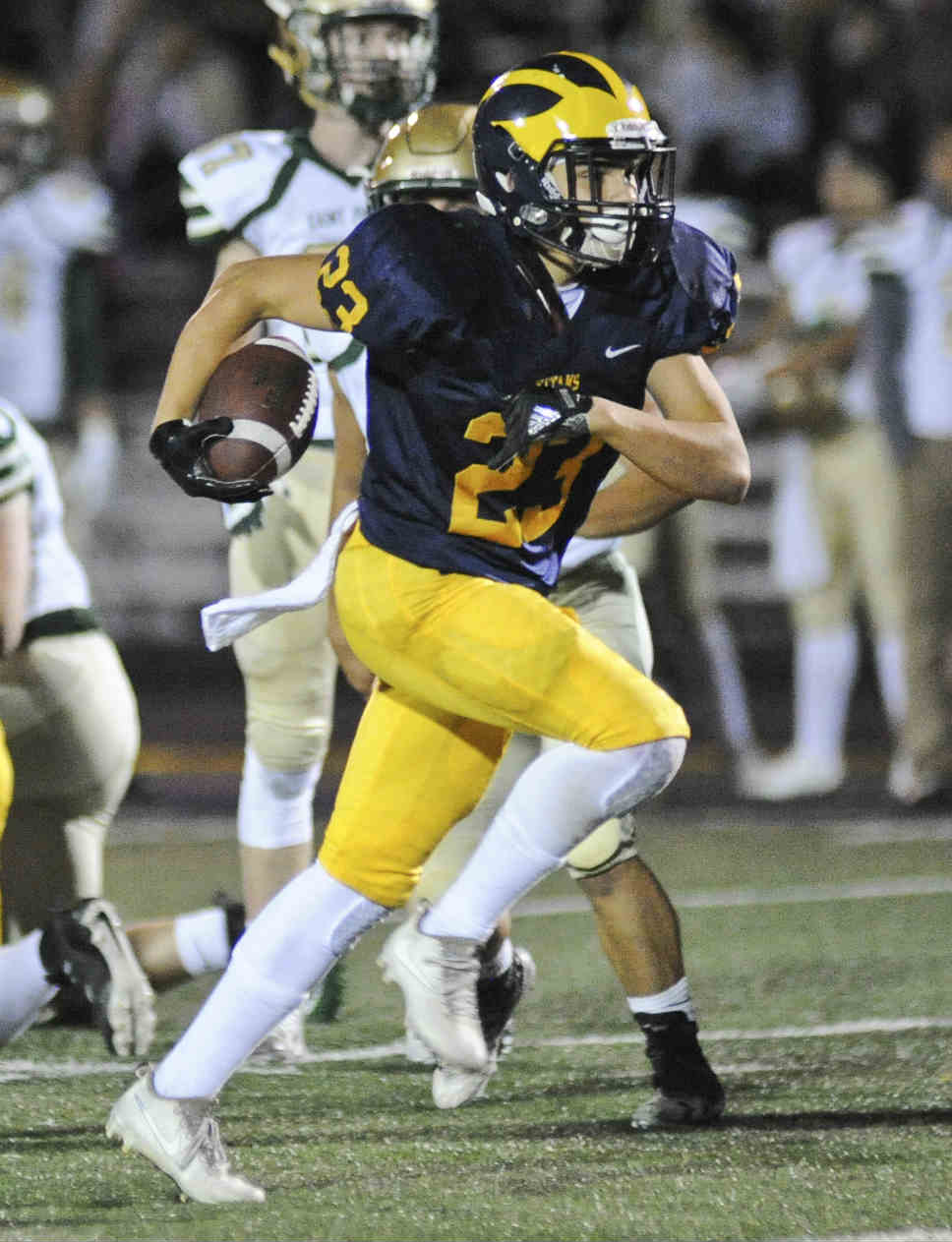 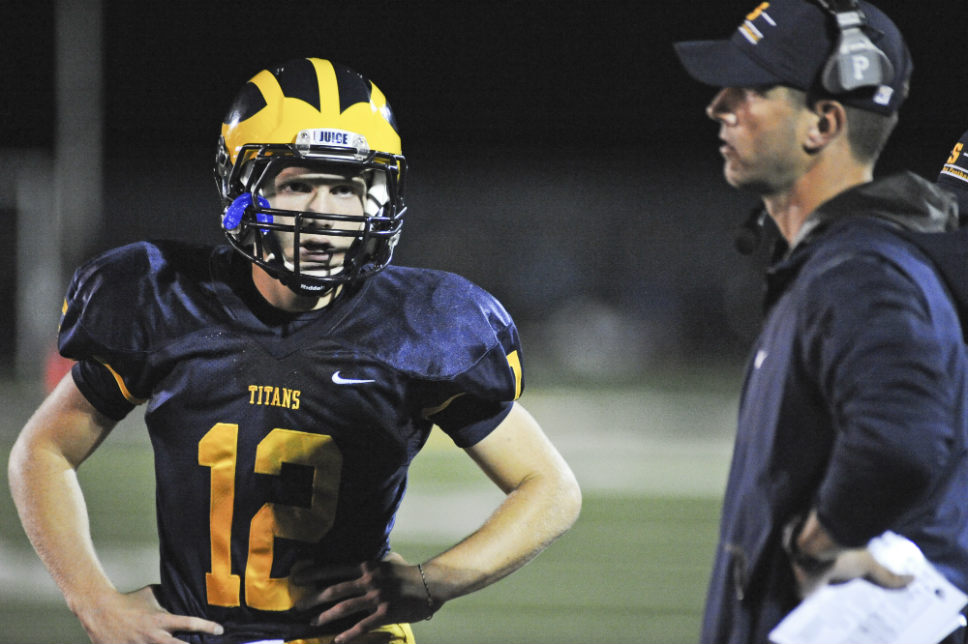