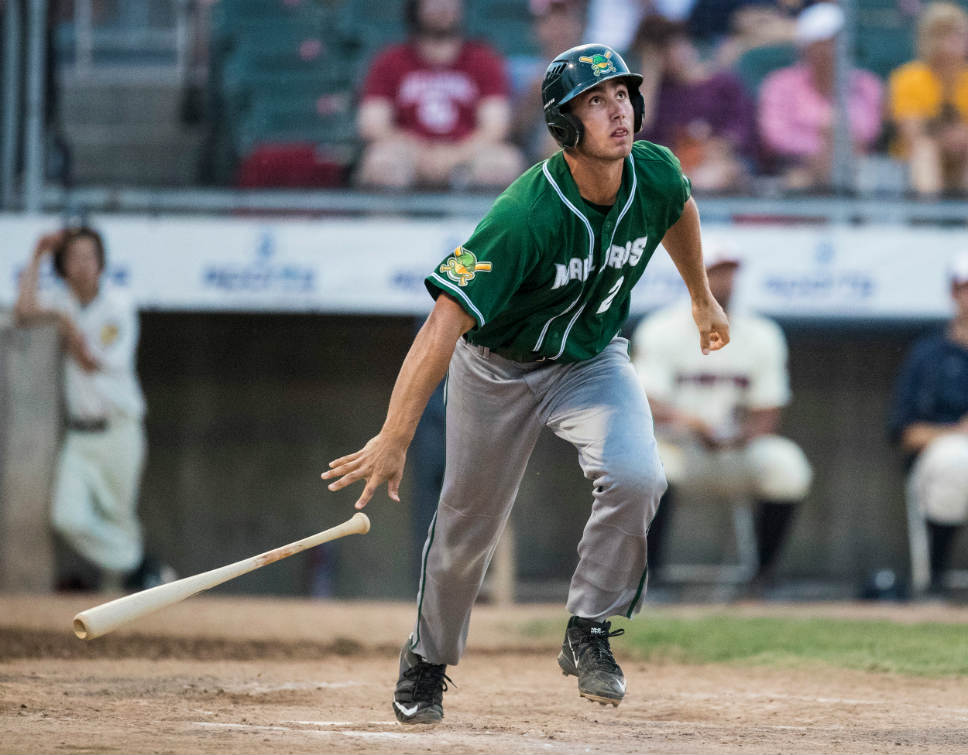 Thomas Smart swings away during a summer college league game in Kenosha. PHOTOGRAPHY BY JOEL LERNER

Thomas Smart, a former antelope-like wide receiver for the Loyola Academy football team, got a chance to stretch out his legs at a college summer league game the other night.

Now a full-time baseball player, Smart displayed some of that head-turning, breakaway speed on a baseball diamond.

He might not be Nigel Talton, a.k.a. The Freeze (see Atlanta Braves’ “Beat the Freeze” promotion), but the 6-foot-4, 210-pound Smart can still fly.

In a Northwoods League game against host Kenosha Kingfish on July 31, Smart — the starting third baseman for the Madison Mallards — went the other way and hit a high drive down the right-field line in the fifth inning.

The ball landed — and how fitting is this? — just out of the reach of Kingfish outfielder Jack Yalowitz, Smart’s former teammate at Loyola.

In a flash, Smart zipped around the bases, dashing into third with a one-out triple.

The soft-spoken Smart didn’t make much of it during a postgame interview, following his team’s 5-2 loss at Simmons Field.

No surprise. Smart, as humble as he is fast, is not one to talk about himself.

“Speak softly and carry a big stick; you will go far.”

Smart did that — and more — during his freshman season at Oakton Community College. He capped off the spring by being named to the National Junior College Athletic Association’s Division III All-American First Team.

His numbers … screamed. The right-handed hitter batted .424 with four home runs, 75 hits and 53 runs batted in. His slugging percentage was .667.

“Being named an All-American … pretty awesome,” said Yalowitz, who will be a junior baseball player at the University of Illinois. “He works hard on his game. It’s nice to see that pay off for him.”

Following his banner season at Oakton, Smart drew interest from a number of Division I programs. He has signed a national letter of intent with the University of Illinois-Chicago.

“Good for him, good for Loyola Academy, good for Oakton and good for UIC,” Yalowitz added. “I’m happy for him.”

Loyola Academy head baseball coach Nick Bridich believes that adding Smart to the fold was a steal for UIC.

“I know that recruiting is not a perfect science,” said Bridich, a former assistant at UIC. “But I feel like a lot of Division I schools missed on him, when he was in high school. Despite being 6-4 and running the 60 in 6.8, he didn’t get any Division I offers. That’s why he went the junior college route.

“Then, after the season he had at Oakton, he got a lot of quality offers,” Bridich added. “I think he’s got a good chance of playing professional baseball someday.”

The pro scouts certainly took notice of the UIC program during the recent MLB June Free Agent Draft. The Flames, which finished 39-17 this past spring, broke new ground, when two of their players were picked in the top 10: right-handed pitcher Connor Ryan by the Cincinnati Reds and catcher Rob Calabrese by the San Francisco Giants. And then, four more UIC players were selected in rounds 18, 20, 21 and 30, while two others, including Mundelein High School grad Mitchell Schulewitz, signed free agent contracts after the draft.

“I feel like UIC was a good fit for me,” said Smart, who will be a teammate with 2017 LA grad Ryan Lin-Peistrup at UIC. “Close to home. Chance to win. Beautiful facility [Granderson Stadium] to play in.

“With the coaches there, I feel like I’ll get better.”

Playing his summer baseball in the Northwoods League turned out to be a terrific experience for Smart. He started 60 games for the Mallards (38-34). Facing hard-throwing Division I pitchers, he hit .257 with eight extra base hits and 30 RBIs.

“He’s got a lot of tools,” said Mallards head coach Donnie Moore. “He swings the bat pretty well, and he’s got a solid arm.

“He was solid for us,” the coach added. “He took a professional approach.”

But, according to Moore, there’s still work to be done with Smart’s game.

“He had to adjust to the velocity of the pitchers in this league.,” said Moore. “I would have liked to have seen a little more pop from him.

“Down the road,” the coach added, “he’ll need to believe in himself a little more.”

Smart, an Evanston resident, comes from a baseball family. His younger brother, Andrew, will be a sophomore third baseman at LA.

His older brother, Fred, was a standout at LA before playing baseball at Oakton and Siena College in New York. He’s currently Bridich’s hitting coach.

Meanwhile, no one would have batted an eye, if Smart had sought a different path and chosen football over baseball after high school.

During his senior season, he turned into a pass-catching sensation. In helping the Ramblers to a Class 8A state championship, Smart earned all-Chicago Catholic League honors. He finished the season with 59 receptions for 776 yards and 11 touchdowns.

“I was a little split. I thought about trying to play [college] football,” Smart said. “But I’ve always been better at baseball.” 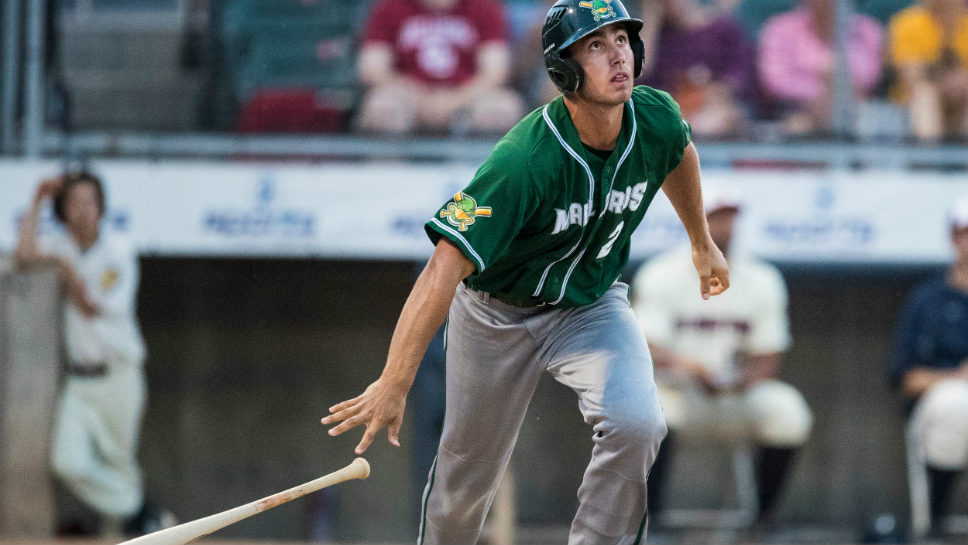 Thomas Smart swings away during a summer college league game in Kenosha. PHOTOGRAPHY BY JOEL LERNER 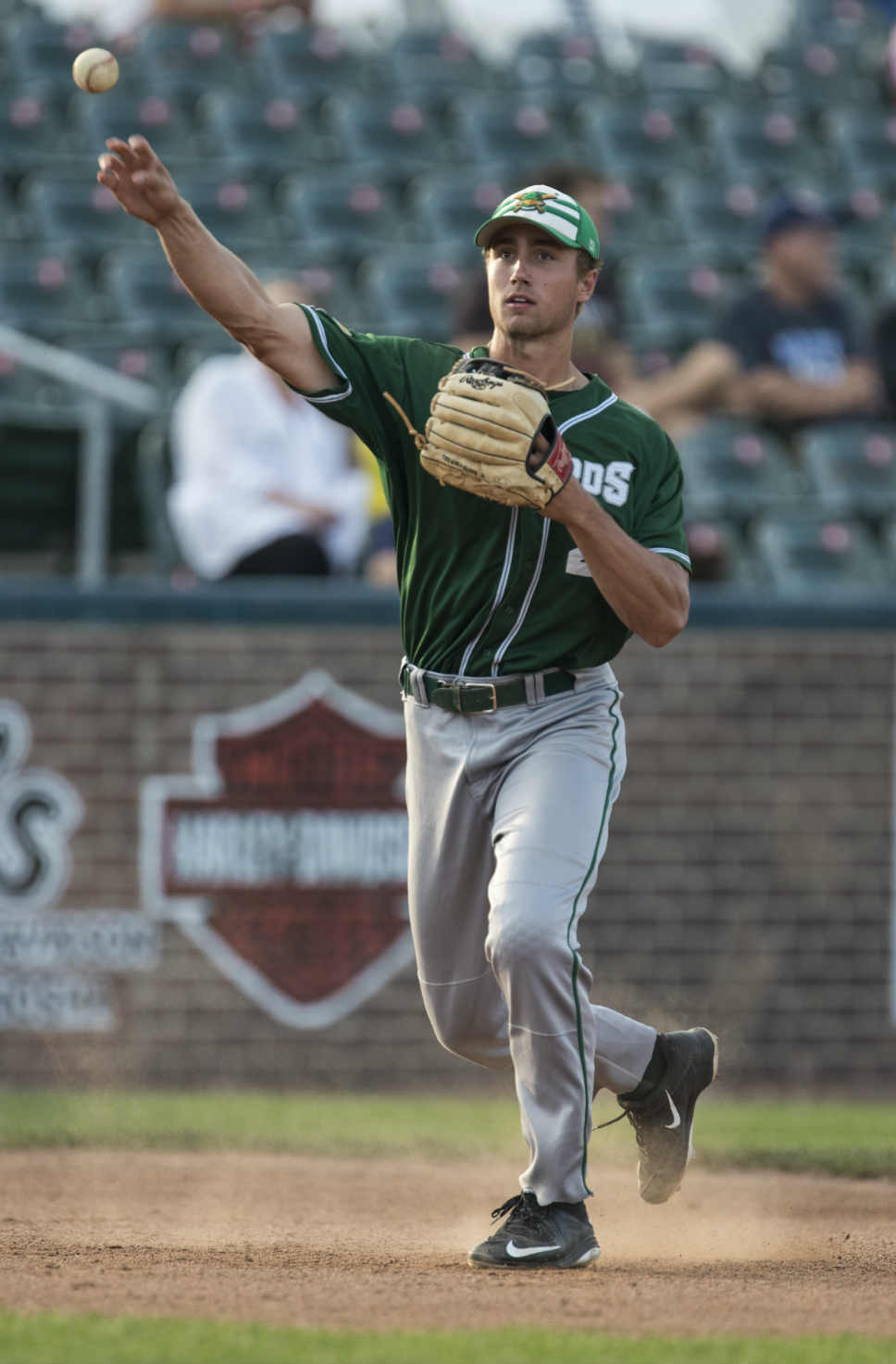 Thomas Smart was the starting shortstop for the Madison Mallards. PHOTOGRAPHY BY JOEL LERNER