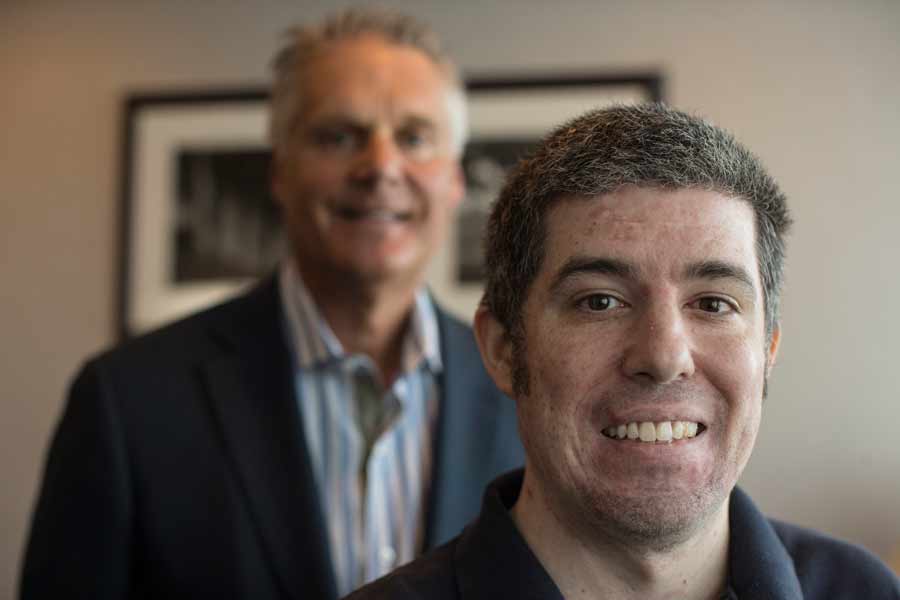 Growing up with a severe form of Crohn’s disease, Skokie native Robby Barkoo, now 37, spent most of his childhood on steroids and immunosuppressants to slow its progression.

Unfortunately, the drugs used to treat his Crohn’s disease damaged another part of Barkoo’s body. The decades he spent taking the potent medications also destroyed his teeth, causing further pain and discomfort.

“Most of my teeth were either broken or gone,” said Barkoo, who lives in Palatine. “I couldn’t chew anything more solid than mashed potatoes and macaroni and cheese.”

Relief came in the form of Dr. Robert Friedstat, a Wilmette resident with 40 years experience in the field of dentistry. Dr. Friedstat is part of a volunteer network of compassionate dentists and laboratory teams called Dental Lifeline who provide dental care for financially disadvantaged, chronically ill patients. During 10-15 sessions over six months, Dr. Friedstat replaced Barkoo’s badly damaged teeth with partial dentures, a procedure that normal costs tens of thousands of dollars.

“Robby’s story really touched me,” said Dr. Friedstat from his office at Friedstat Dental Associates in Skokie. “I was impressed by his resilience and positive attitude.”

This summer, after years being restricted to soft foods, Barkoo was finally able to enjoy his favorite dish: Chicken Parmesan.

“I’m incredibly grateful to Dr. Friedstat,” said Barkoo. “Because of him, I can eat again.”

Barkoo, who also watched his mother battle Crohn’s disease, has spent his life around doctors, acquiring an impressive knowledge of medicine and healthcare along the way. Crohn’s is an inflammatory bowel disease that causes abdominal pain, diarrhea, fever, fatigue, and weight loss.

According to the Crohn’s Colitis Foundation, approximately 1.6 million Americans are battling this disease, including some 80,000 children. Some people may be symptom free for most of their lives; others have severe chronic symptoms that last a lifetime.

After studying to become an Emergency Medical Technician (EMT) at Oakton Community College, Barkoo decided to pursue his childhood dream of becoming a firefighter. In 2003, he graduated from The Firefighter Training Academy and joined the Northfield Fire Rescue Department with plans to pursue further training as an EMT.

“Becoming a firefighter was one of the best things I’ve ever done,” said Barkoo, who said his diligent study habits during firefighter training earned him the nickname ‘The Bookworm.’ “I bonded with all the other firefighters…I felt at home there.”

But just one year into his firefighting career, the symptoms of Barkoo’s disease became too painful and debilitating for him to continue doing such physical work.

A series of painful surgeries, including a botched procedure to remove Barkoo’s rectum and large intestine, left him with a perpetually open wound and life- threatening Staph infection. Today, even after multiple surgeries to repair the damage, Barkoo is still unable to sit for more than an hour. His legs are still too weak and ridden with sores for him to drive or walk without assistance.

Through it all, Barkoo has retained his optimism and positivity. Determined to continue fighting his disease, and even more committed to helping others, Barkoo and several other Crohn’s patients formed an online community called “The Crohnies.” Together, they’ve launched “Gaming4Guts,” an online gaming site that raises money for the National Crohn’s and Colitis Foundation. The site invites online gaming enthusiasts to either sign on to play as individuals, watch others compete, or join as a team.

For the past four years, Gaming4Guts has held a weekend-long game-a-thon in December. All proceeds from the online competition go toward funding treatment and research for Crohn’s disease. After pulling in $250 at their first game-a-thon fundraiser in 2013, Gaming4Guts raised more than $3,000 last year.

“Each year we try to do better with our fundraising efforts,” said Barkoo, whose preferred video game is World of Warcraft. “This December we’ve decided to expand the game-a-thon to include all types of games, like board games.”

Although Barkoo must still endure a series of monthly surgeries, he remains hopeful he’ll one day resume normal life and retrain to be a nurse.

In the meantime, thanks to Dr. Friedstat and the work of Dental Lifeline, Barkoo has a mouthful of new pearly whites.