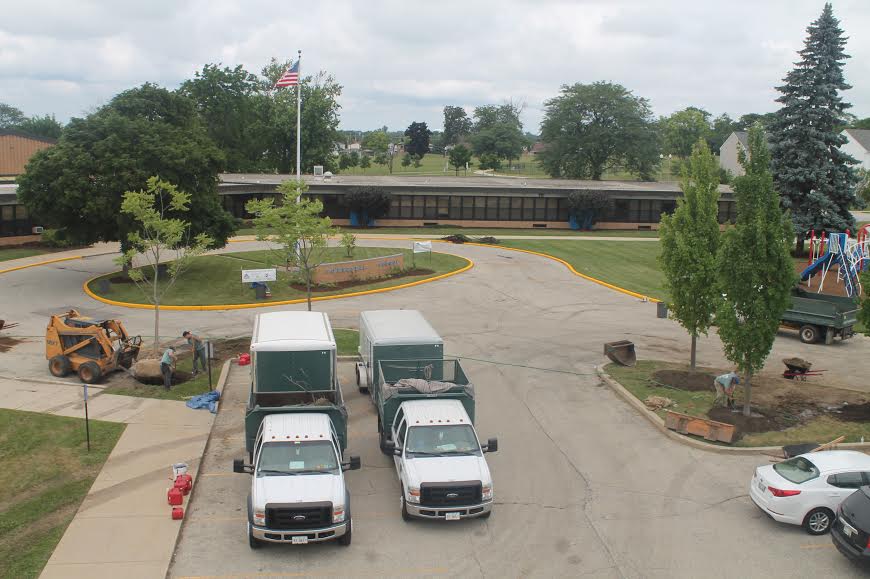 Forrestal Elementary School in North Chicago is located on federal land that is part of Naval Station Great Lakes.

School opened in the K-12 district August 16 with D-187 administrators knowing they had reserves to take the district through most of the term but no idea what help would come from the State of Illinois. The flow of federal dollars is also uncertain.

Unlike school districts along the North Shore and surrounding areas, which are overseen by locally elected boards, District 187 has been operated by a superintendent and board appointed by the Illinois State Board of Education for more than 20 years. That is when its financial situation became perilous and the state stepped in.

O’Hara said the problem is political and requires local, state and federal elected officials to make sure the district achieves long-term financial success. That is why she and Lansing started having conversations this summer. They want D-187 to avoid bankruptcy.

“No school district has ever gone bankrupt and no one knows what would happen if it did,” said O’Hara. In addition to serving her second term as village president, O’Hara was an educator who spent 36 years at Lake Bluff Middle School, 19 teaching and 17 as principal.

Lansing said quality schools are important for not only Lake Forest and Lake Bluff but for adjoining communities. Children of families living at Naval Station Great Lakes go to the North Chicago schools.

“Lake Bluff and Lake Forest have always been concerned about District 187,” said Lansing. “It does not seem like it is a problem in the near term but it needs to be strong in the intermediate term and the long term. We want to help get them the aid they need.”

From time to time rumors have surfaced that if District 187 fails, the district will be dissolved sending some of those students into Lake Forest and Lake Bluff schools. Roycealee Wood, a Lake Bluff resident and Lake County regional superintendent of schools, said that will not happen.

“Those students will stay right where they are,” said Wood. “They’re going to stay in the same schools. No one is going to send them to Lake Bluff or Libertyville. They will remain in the schools they’re in.”

Should District 187 become financially insolvent at some point in time, Wood said the seven elected members of the Regional Board of Education in Lake County would make a decision about the district’s future. She also said other districts could be involved in the operation but the youngsters will continue to go to their neighborhood schools.

“They will hold a hearing and take testimony. They will come up with a plan,” said Wood. “They did that 20 years ago,” she added referring to the time the district had a severe financial crisis because of a strong cutback from federal impact aid. Impact aid is money paid by the federal government to districts that educate military dependents.

John Price took over as superintendent July 1, replacing Ben Martindale who retired after several years at the helm. Martindale’s fiscal prudence helped the district build up sufficient reserves to operate most of the year without money from either the state or federal government, according to Price. He said there is enough money for eight months.

Though Price said it appears the state will provide more than it has in recent years, there is uncertainty. A bill doing just that passed both houses of the Illinois General Assembly but was partially vetoed by Gov. Bruce Rauner August 1, according to a CBS Chicago report.

The state Senate overrode the veto August 13, according to an NBC Chicago report, but the state House has delayed a vote until at least August 30, according to an August 23 Chicago Tribune story.

Rauner wanted Chicago schools to get less money, with more going to other districts including North Chicago, according to Price. Price said either the original legislation or the governor’s changes will meet North Chicago’s needs.

“The sooner the better for us,” said Price.

The key to state funding for North Chicago is long-term stability, according to O’Hara. For the past few years Martindale had to make his case to the state board and eventually got money. O’Hara and Lansing want something permanent.

The original legislation passed by the legislature is an ongoing formula, according to state Sen. Terry Link (D-Waukegan). A 1965 graduate of North Chicago High School, Link counts the district’s residents as his constituents.

“In its current form, (the legislation) gives North Chicago $3 million more. That will give it long-term stability,” said Link. “The rest has to come from (the United States) Congress,” he added referring to impact aid.

While North Shore school districts are funded primarily by property taxes, 49 percent of the real estate in District 187 is the naval base, which produces no property tax revenue, according to a May 10, 2016 DailyNorthShore.com story. That is why the impact aid is needed.

Those federal funds can be as little as $300 per student, according to O’Hara. For the last several years, Link has fought for the highest level of impact aid — $6,000  per student — with those who have represented North Chicago in Congress including Sen. Richard Durbin (D-Springfield), Rep. Brad Schneider (D-Deerfield), former Sen. Mark Kirk (R-Highland Park) and former Rep. Robert Dold (R-Kenilworth).

Schneider is among a group of more than 100 representatives of both parties pushing for increased impact aid. Congress will take a closer look at spending when it returns from its August recess in September. At this point he said it looks more promising than in the past.

“Impact Aid is critical, especially for districts like North Chicago,” said Schneider in an email to DNS. “I’m pleased the draft bill reported out of committee includes funding – a sign of the robust support impact aid (has) on both sides of the aisle.”

Township High School District 113, which includes Highland Park and Deerfield High Schools, expects to spend $25,684 per student for the coming term, according to Christine Gonzalez, the district’s Director of Communications & Instructional Technology.

North Shore School District 112 serving Highland Park and Highwood is spending $16,580.54 per student, according to Nicholas Glenn, the district’s director of communications. Deerfield Public Schools District 109 plans to spend $16,054 for the current term, according to its budget.

While financial uncertainty remains until both the state and Congress act, Price has one primary goal.

“I am 100 percent focused on providing the best educational opportunities for the children here,” said Price.