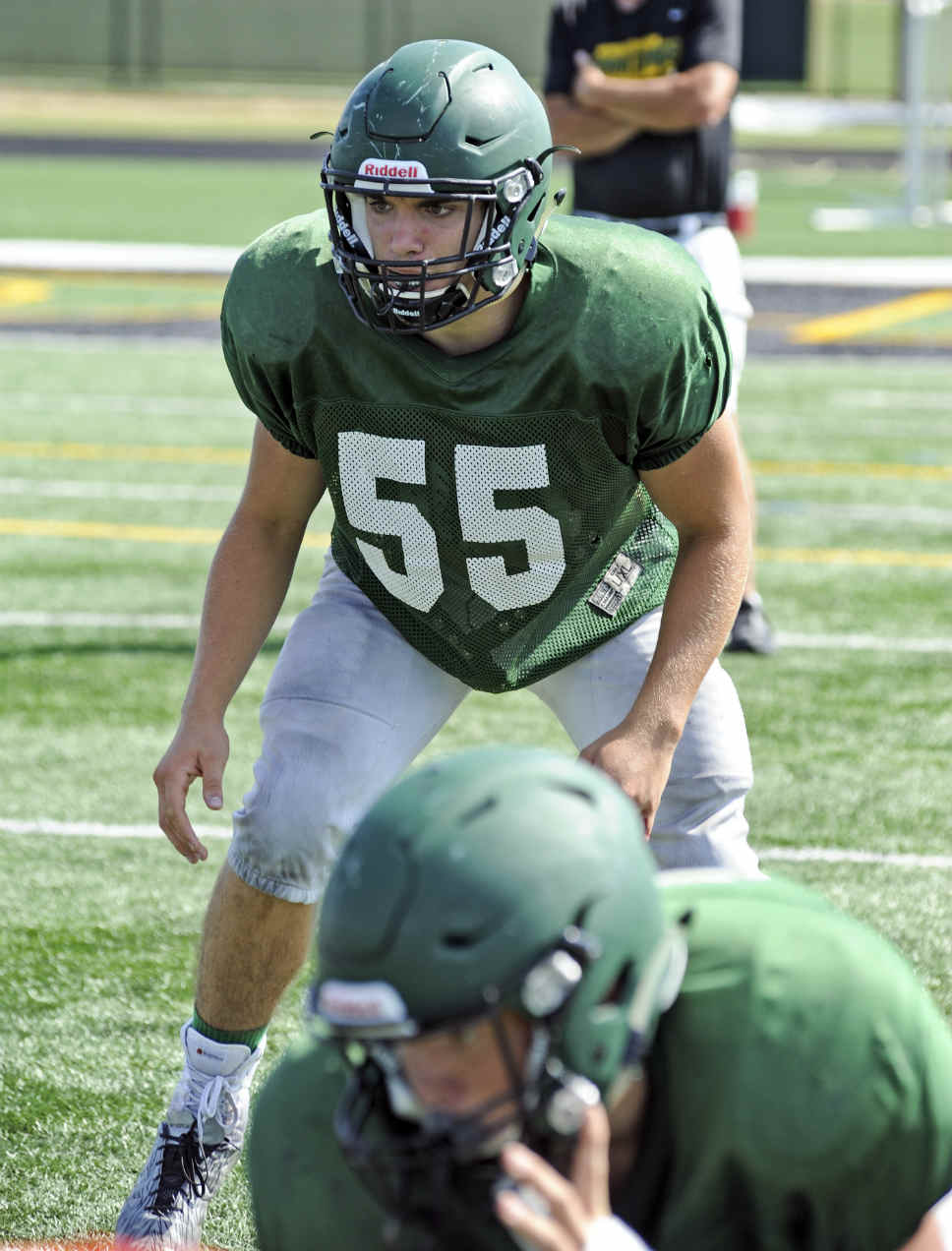 Skyler Metzger will be lining up at middle linebacker this fall for Glenbrook North. PHOTOGRAPHY BY GEORGE PFOERTNER

Do not let the toughness and closing speed of Glenbrook North senior middle linebacker Skyler Metzger fool you.

There’s a gentle side to the 5-foot-10, 205-pounder, especially when he’s around his younger sisters.

And Sabella — weighing the equivalent of about two football helmets — was born on Aug. 10.

“I’m not macho around them,” Metzger said with a smile following the Spartans’ practice on Aug. 18. “I’m a sweetheart around my sisters.”

As a junior last fall, Metzger was an infant — as an offensive lineman. A linebacker his entire life, Metzger started at left guard for a squad that finished with an 8-1 record in the regular season and split a pair of Class 7A state playoff games.

“It was different,” recalled Metzger, who also has a younger brother, eighth-grader Shae, and parents with first names (Sherri and stepdad Sam) that begin with ‘S’. “I remember thinking, ‘Wow, I’m playing left guard on varsity.’

“I had made my first tackle, in the fifth grade, as a linebacker covering a receiver on a slant play. I hit him; he went down. I’m thinking, ‘This is great; I love this sport, and I love playing linebacker.’ “.

Metzger — on a team that lost 16 starters to graduation this past spring — gets to return to familiar grid territory this fall, and he couldn’t be happier about the move.

“Our defense has very good chemistry, and we’re all really close friends,” said Metzger, who recorded four tackles in ’16 (one after an interception by an opponent and three as a special-teamer).

“Captain of our defense, captain of our team,” senior running back Jimmy Karfis, an all-CSL North pick in ’16, said of Metzger, who, along with Glenbrook North’s other starting linemen, helped Karfis rush for 927 yards and 16 touchdowns last fall.

Karfis averaged 6.7 yards per carry and also finished with 20 receptions for 230 more yards.

“Skyler,” Karfis added, “never yells at a teammate. If he has to say something that needs to be said to a teammate, he does it in a positive, always in a positive way. And he doesn’t let the sport of football get to his head. The mental part of his game has always been one of his strengths.”

Another asset: relentlessness, from the opening kickoff until the scoreboard clock shows 0:00 after four quarters.

“Skyler is a 48-minutes-of-football player every game,” Spartans football coach Bob Pieper said. “He lets his play do all of the talking for him, and he does a really good job of rallying his teammates with the way he plays. We ask our ‘Mike’ [middle linebacker] to do a lot; we know Skyler will be able to handle the job well. He’s getting good at dropping back and reading offenses.

“Last year,” the coach continued, “it didn’t matter who lined up against him — a 5-foot-4, 145-pound nose tackle or a 6-4, 300-pound nose tackle. Skyler never cared about the size difference. All he cared about was playing football and playing it with the right attitude.”

Metzger’s first taste of football occurred in a flag football game, nearly 10 years ago on a park district field. Fun. Metzger had fun immediately. The activity was his cup of … whee!

“I couldn’t wait until I got the chance to play tackle football,” Metzger said. “When I did, I had to play with bigger kids because of my size.”

Nobody ever questioned his work ethic from there. The weight room became his second home. Sprints, at the end of practices? Metzger still looks forward to those. The player with the dogged approach to all things football never dogs it in a drill.

“He’s usually the second guy to arrive in the weight room, right behind me,” Karfis said. “Sometimes we get there at the same time. Skyler is stronger this year, quicker. He’s fast for a big guy. Means a lot to our team.”

“A very good guy overall and a very inspirational guy,” the running back added.

Metzger would embrace the chance to play college football if the opportunity arises. He deems a post-college job in physical therapy a “dream job.”

“Sports and sports injuries … I connect with those fields,” said Metzger. “I like to help people. I’d be able to help people and enjoy the work as a physical therapist.”

Most of his free time is spent either working out or hanging out with his family.

He lifts his younger siblings carefully.