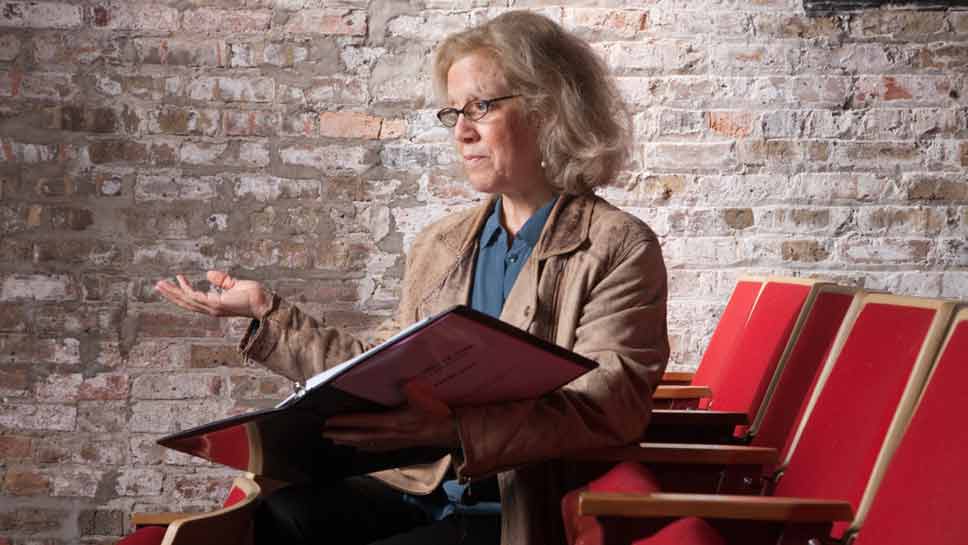 WINNETKA – When her children were growing up, longtime Winnetka resident Lauren Taslitz always knew the empty nest was looming. She dreaded it the way you dread a diagnostic phone call from a doctor, but the mother of three and lawyer by way of Princeton University undergrad and Harvard Law School turned her third act into a full life as a writer of musical comedies.

But her journey to the stage required some major life adjustments.

Taslitz started writing musical comedies when her oldest child was in seventh grade at Washburne Junior High School in Winnetka. At that time, parents produced, wrote and performed in a variety show every year to raise money for the school. It was a family musical, very G-rated, “with songs about shopping at the mall for girls and video games for boys,” said Taslitz. “It was boring to write but also really fun because it was the first time I had ever done anything like that.”

Turned out she not only enjoyed it, she also was good at it.

The PTO experience inspired her to write for the Women’s Club of Evanston Annual Benefit Show, where, about 12 years ago she met Leighanna Reichenbach of Wilmette. “I approached her and asked if she was interested in trying to write something longer than three minutes. Leighanna and I knew nothing about writing a full-length show. But we did it. We wrote a show called Join the Club. We started in May, and in January invited friends to my basement. Then we rented a theater and put it up in Evanston.”

Taslitz kept writing for the Evanston Women’s Club and started working on a second show. As with Join the Club, which was about the importance of friendship, the new show mirrored issues going on in her life and the lives of her friends. Written with composer Paul Libman, her second full-length show was called After They’ve Gone.

“Saying goodbye to your kids and figuring out what you’re going to do next is horrible! It’s really horrible!” Taslitz said when I mentioned that my youngest was about to enter her senior year in high school. “There is a grieving process. It’s a huge, huge loss!”

This wasn’t the answer I was hoping to hear – but then she continued, offering insight on how she dealt with the emptiness:

“It was a good thing for me and my children that I wound up being so busy that I couldn’t think about them all that much.”

She paused and thought some more ….

“It was a great thing for everybody!”

Keeping busy writing was the easy part. Writing comes naturally to Taslitz. Singing or playing an instrument? “Depends on whom you ask,” she said about her musical abilities.

But getting her musical comedies produced? That seemed insurmountable without a major life disruption.

“I had done everything in my power that I knew how to do to get anyone to pay attention to me or the show (After They’ve Gone), and I realized there was no reason to expect any more success if I didn’t do something differently. And the only thing I could do was to go get an MFA in musical theatre writing.”

The hitch? The only Master’s of Fine Arts in Musical Theatre Writing that she could find was 812 miles away from Winnetka.

“There are a lot of places to get an MFA in creative writing, but to write musical theatre it was NYU or nowhere,” she said of New York University’s Tisch School of the Arts. “Believe me, I would not have gone to New York if there was one in Chicago!”

Going back to school required leaving – albeit temporarily – her Winnetka home, her husband of 30 years, William Bloomer, her newly remarried mom, Diane Taslitz Durbin of Highland Park, her married daughter, Whitney Krutulis of Chicago, and one of her two grown sons, Greg Bloomer. (Her older son, Brian Bloomer, lives in San Francisco.)

It also required attending classes and bonding with people who were half her age – younger than her own kids, even.

“That was the part that was intriguing — that was the part that I could not imagine. Moving to New York was not daunting, because I had lived there after law school. And it wasn’t going back to school that was daunting,” she said. “It was leaving my life and being with all these kids 24/7 that I couldn’t imagine (the average age of her classmates was 25). I thought there always would be a barrier to friendship because they could never be a complete peer.”

She was wrong – she did bond with her fellow students. But not at first. The first year, she spent a lot of time feeling isolated and wondering what she was doing so far from home.

“The first year was very intense. Even though occasionally someone would say ‘do you want to come get a beer?’ I didn’t think they really wanted me to go. I thought they would change how they would talk when I was there. And probably they would have that first year; my presence would have had an impact on their conversation then. But by October of my second year, I felt totally comfortable and totally part of the group, and I’m positive that my presence did not have any impact on their behavior or what came out of their mouths At All. And now as a group I love them all — and the people I am closest to, I adore. I could not have imagined how much affection I would feel for them. “

In May, Taslitz received her Master’s of Fine Arts in Musical Theatre Writing. And her hunch that she needed to go back to school to get produced turned out to be more than intuition. In early August, her cabaret show, Regretting Almost Everything, written with composer and classmate Danny Ursetti, was produced in Mr. Finn’s Cabaret at the Barrington Stage Company in Pittsfield, Massachusetts.

Her thesis, The Quantification of Relative Human Insignificance, written with composer and classmate Jacob Fjeldheim, is also in development.

“It’s about how people (of a certain age) have the same desire to be the protagonist and to take a journey or try something new at this stage as we did when we were 25 or 30,” she said. “I know a lot about the third act, but in terms of what we see on the stage – we never see older people who want to start fresh and have an adventure and do something crazy.

“I clearly wanted to.”