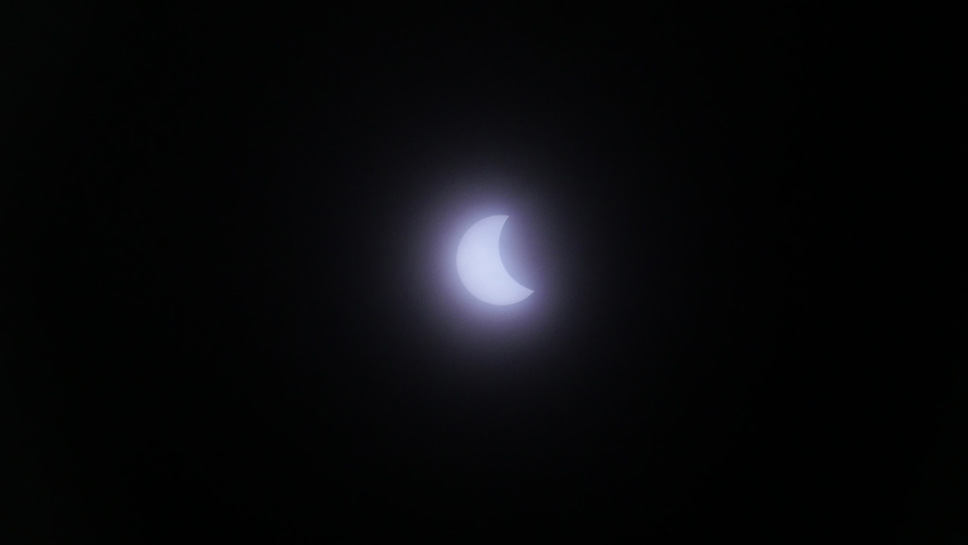 The solar eclipse of 2017 as seen at Lake Forest College. PHOTOGRAPHY BY IAN BLANK 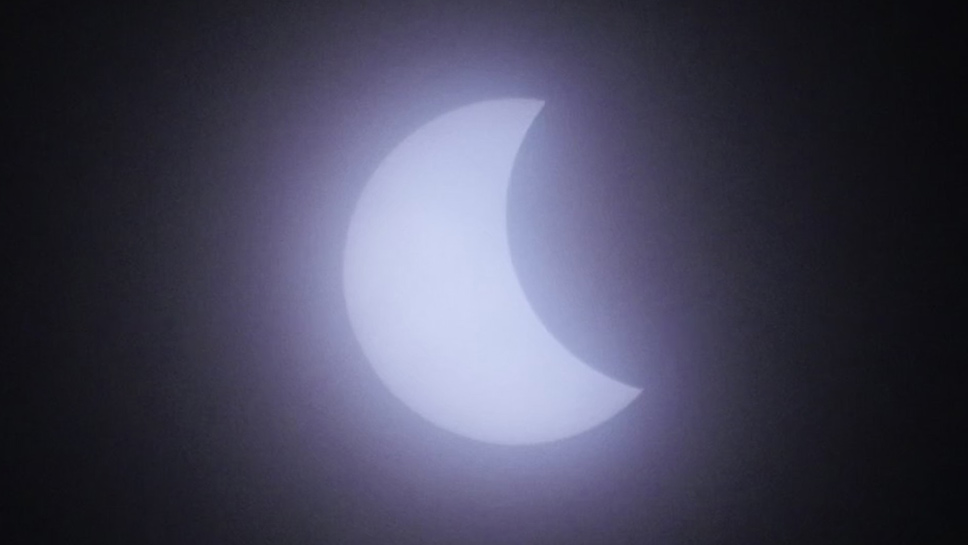 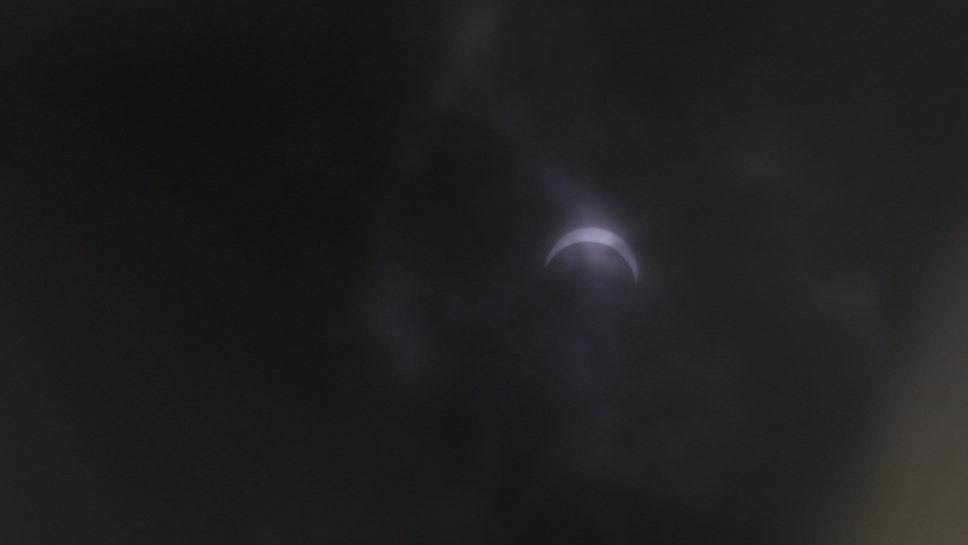 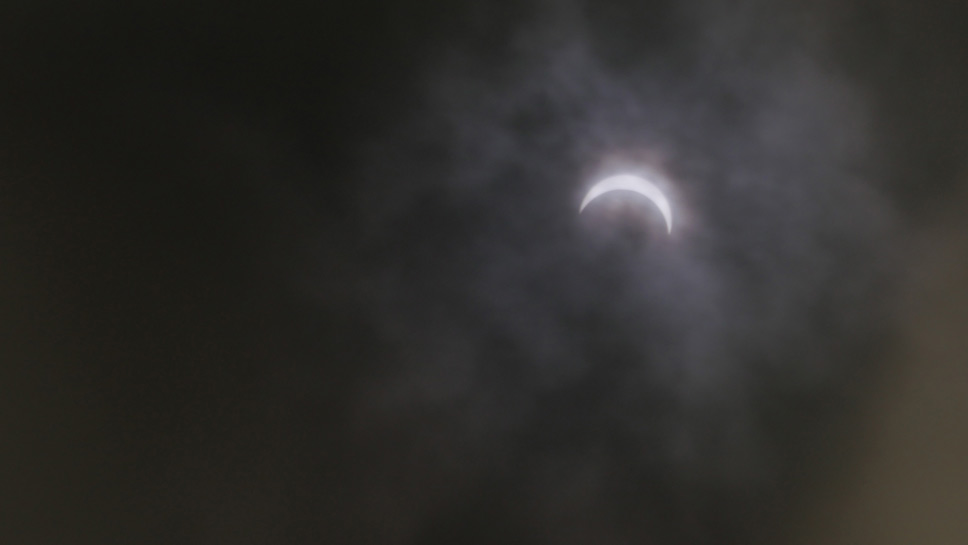 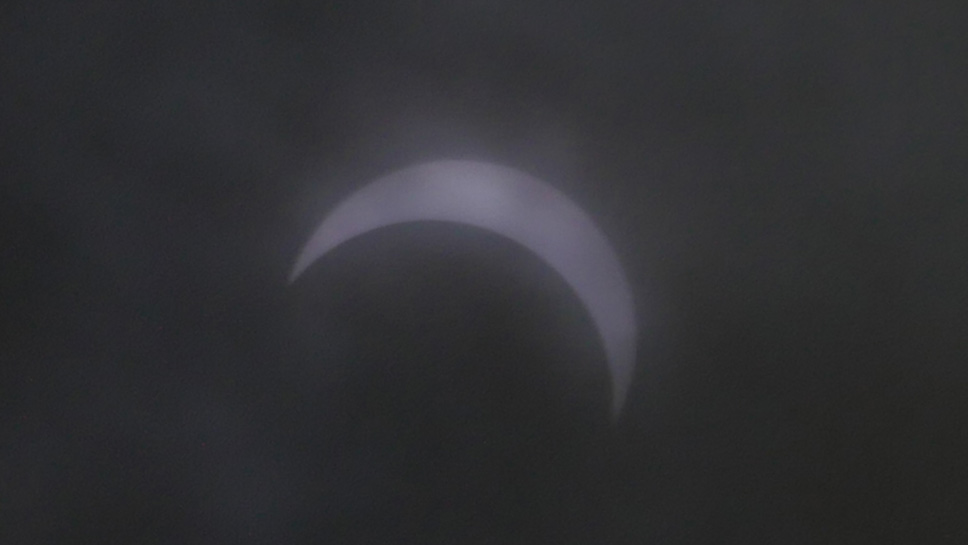 LAKE FOREST — Cool was the word used most often to describe the solar eclipse during a viewing event at Lake Forest College, whether it came from the mouth of a Sheridan Elementary School fourth grader or a tenured professor.

The college’s physics department set up solar telescopes and gave filtered glasses to the campus community to let them watch the moon pass in front of the sun in a rare solar eclipse August 21 in Lake Forest.

Though clouds blocked the view much of the time, more than 200 people could not contain their exuberance as they saw a rare sight. It has not occurred in the area since 1975, according to Michael Kash, chairman of the physics department, which includes astronomy courses. Kash said an eclipse of this magnitude has not occurred here since 1918.

“It’s cool very cool,” said Kash, who organized the event. “It is a great opportunity for everyone to see this before their eyes.”

Bo Bertola, a Sheridan fourth grader, had the same reaction as Kash while getting a computer enhanced view of the eclipse from a solar telescope.

“It’s pretty cool,” said Bertola. “You can only see a little of the sun there,” he added, pointing to an orange crescent to the right of a black-looking moon.

Bryan Bertola, a Lake Forest resident and LFC alumnus who is an architect, said he was one of Kash’s students. His language was a little different than that of his son or former teacher.

“Amazing,” said Bryan Bertola. “I wanted to make sure he experienced this,” he added referring to Bo Bertola.

Several telescopes were positioned in the viewing area on campus, where people stood visiting and staring at the sky with the specially recommended glasses to protect eyes from the sun’s rays. The telescopes erased any danger from the sun.

“They let you look at the sun,” said Nathan Mueggenburg, associate professor of physics at the college. “We use it to see sun spots and study the sun. Today we get to use it to view the eclipse of the moon passing in front.”

The image from the largest of the solar telescopes was projected on a computer screen in a tent behind the telescope to assure eye protection from all viewers, according to Kash.

The telescopes were a gift to the school from Hal Weibel of Lake Forest. He had several of them, said he plans to move to Colorado and was not going to take them along. He sought an appropriate recipient for his donation.

“I wanted to find a place where it would educate a lot of people,” said Weibel. “This confirms my decision.”

Though the clouds did not dampen excitement of some of the students, it kept viewers quickly looking to the sky through their glasses any time the sun broke through the clouds for a moment. Cool was still the operative word.

“It is so cool but the clouds are hard to see through,” said Annabeth Gibbons, a sophomore from Altona.

Max Rohwedder, a freshman from Prospect Heights, was going through new student orientation ahead of the first day of classes August 24. He said he was excited about the eclipse as part of the beginning of his college career.

“It’s really cool,” said Rohwedder. “This is something I’m really going to remember.”

Jillian True, a freshman from McHenry, said she was disappointed with the clouds but liked what she saw through her filtered glasses when she got a glimpse of the eclipse.

“The sun looks like a small orange crescent,” said True. “You can see the moon covering the sun. It is cool, cool.”

Virag Orban, a freshman from Hungary, said seeing the eclipse during her orientation will be something she always remembers. It has already made her think about making sure physics was part of her curriculum.

“This is something we’re all going to be discussing in class,” said Orban. “It is very special.”

Kash said the next solar eclipse in the area will be in 2024. It too will be partial. At the peak time Monday, 87 percent of the sun was covered, according to a Chicago Tribune story. There was a 100 percent eclipse in Carbondale. Carbondale will have the same experience in 2024, giving some people thoughts about heading there in seven years.

“That’s a place I’d like to be,” said Maggie Kruse, a Washburne Middle School seventh grader from Winnetka. “This was pretty cool.”

Scott Schappe, another Lake Forest College physics professor, was watching the eclipse with his wife, Tracy McCabe, a senior English lecturer, and his son, Ian Schappe, who also works at the school. Scott Schappe said he would likely be in Lake Forest in 2024.

“I’m starting to think about it,” McCabe said when asked about a road trip to Carbondale in 2024. 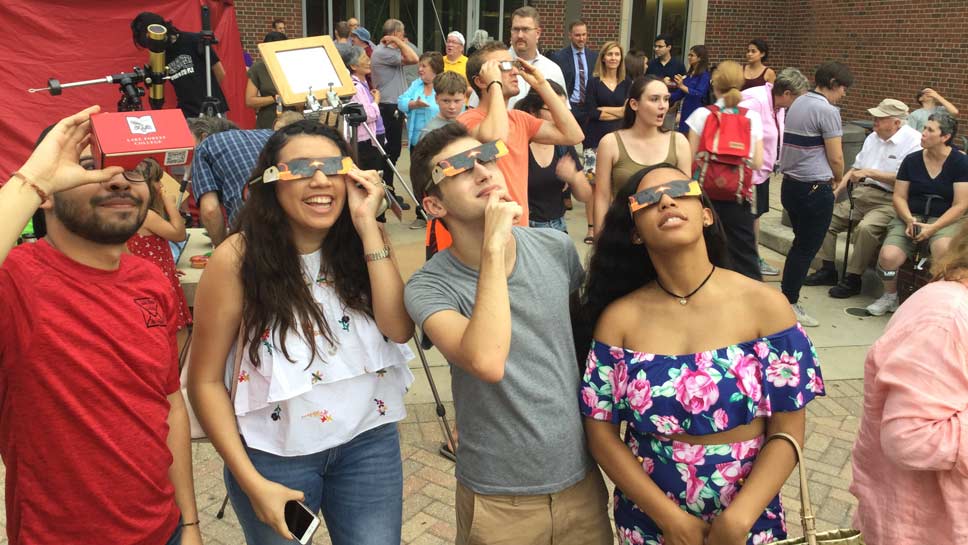 Viewing the solar eclipse of 2017 at Lake Forest College. PHOTOGRAPHY BY IAN BLANK 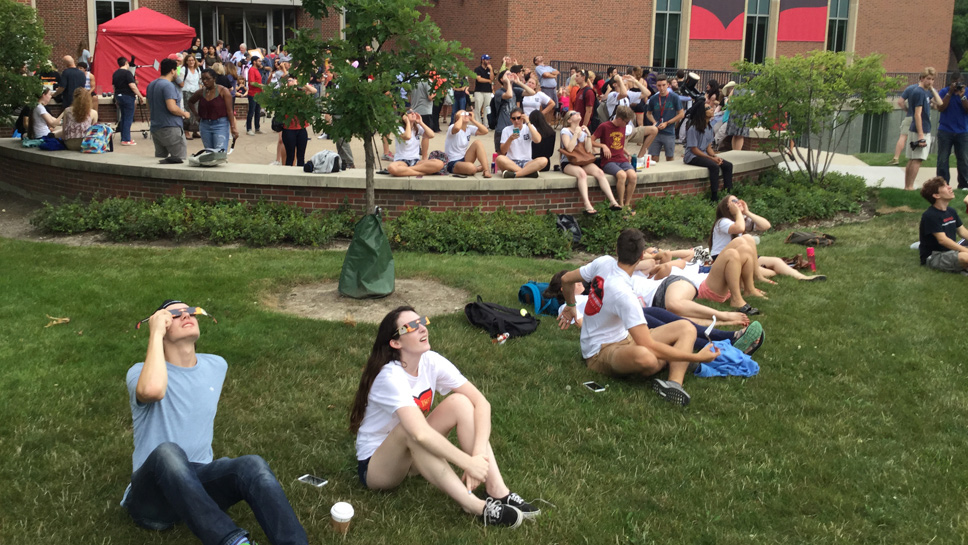