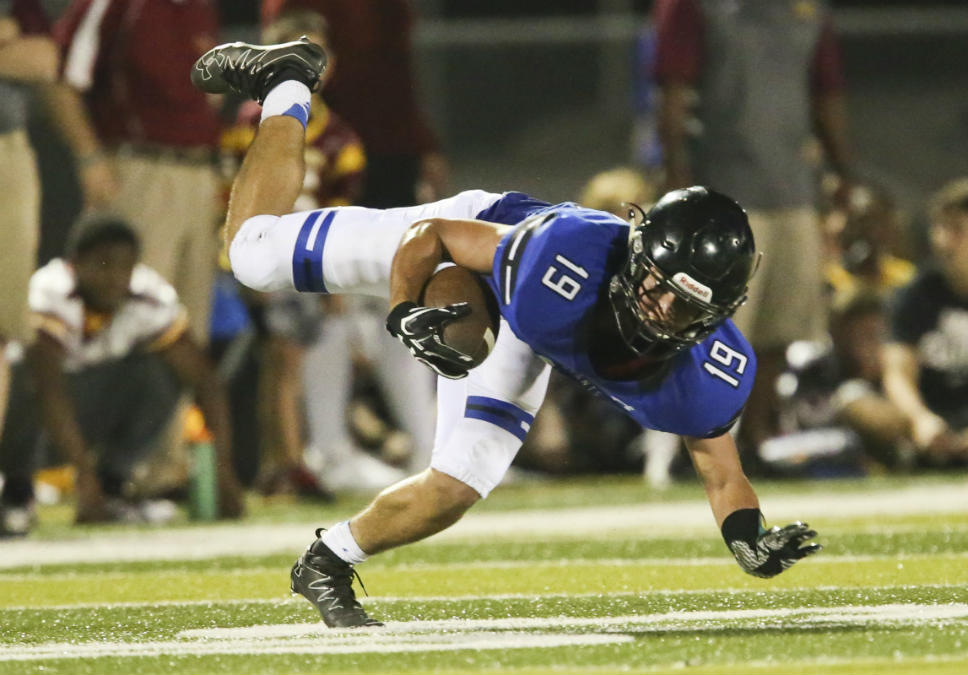 The hard-hitting cornerback who keeps opposing wide receivers up at night on the eve of a football game happens to be a big-time nap guy.

Spitz — now a 5-foot-8, 170-pounder, a year after finishing the 2016 season as a 5-7, 153-pounder — produced more than a few eye-popping moments on football fields last fall. The Giant got off to a sensational start, burning visiting Hersey with a pair of touchdown receptions (56 and 8 yards) and coming down with an interception in a 40-18 season-opening victory.

Eight weeks later, with the stakes considerably higher in the regular-season finale against visiting Vernon Hills High School, Spitz topped that august effort in late August with an interception in each of the Cougars’ final two possessions.

The second pick clinched HP’s 14-9 win — and a share of the Central Suburban League North title with Glenbrook North. A Class 7A playoff berth also accompanied the Giants’ sixth triumph of the season on that night.

“Quite a player and a great energy guy,” Giants football coach Joe Horeni says of the all-CSL North selectee who attended four football camps (Penn, Princeton, Northwestern University and Washington University in Missouri) this summer. “Noah brings a lot of swagger to the field, and he’s certainly a leader who plays hard-nosed football on every play. Not the biggest guy, but his heart is huge.

“What he did in that game, against Vernon Hills, being where he had to be at the right time, twice, with the game on the line — that’s Noah Spitz, a kid who will always be there for you,” the coach adds.

The most remarkable part of Spitz’s junior football season had nothing to do with a stat.

It was this: Spitz played the bulk of the season with a torn right quad. A. Torn. Right. Quad.

Read that again and try not to wince.

Spitz dealt with the severe injury from Week 3 through the Giants’ loss to eventual Class 7A state runner-up Plainfield North in a postseason opener in October. But he had to relinquish his duties on the offensive side of the ball in order to maintain his value as a feisty cornerback (3 INTs, 10 pass breakups, countless jarring hits).

“I got treatment for the injury pretty much every day, while I ate lunch at school, and after practices and games,” says Spitz, the starting second baseman on the school’s varsity baseball team last spring and the younger brother of former Giants gymnastics standout Avery Spitz (now at Tulane University). “Lots of stim [electrical stimulation] and ice. Our trainer [David Fowkes] was great; he did an amazing job getting me ready to play each week.”

No matter what he played as a youngster — football or basketball or baseball — Spitz competed in a sport to make plays. Game-turning plays. Resounding plays.

Noah Spitz, simply a participant in a sport?

“He was always one of the most athletic kids and one of the most physical kids in the games we played before high school, and he continues to be that guy,” says HP senior running back/linebacker and good friend Ryan Brincks. “Noah is thicker [because of time in the weight room] this year, but he’s still fast. A play he made last year that I’ll never forget is the one he made against a Maine West kid, who made a catch but got nowhere. Noah had hit him right away and flipped him. Noah is a smart player who plays like an animal out there. He makes plays; he’s a playmaker.”

Spitz’s favorite sound, surprisingly, isn’t the one that emanates from a clean collision with a ball carrier near the line of scrimmage. It’s the sound of … silence.

In a road game.

A Little Giants football player who often got 30 touches in a game as a running back in his grade-school years, Spitz didn’t fully embrace the sport of football until his freshman season. HP’s frosh squad went 9-0 in 2014, with its first-team defense allowing a scant one TD all season.

“That team,” Spitz recalls, “had a really good bond, great chemistry. We didn’t just have an outstanding defense; we also had a bruising offensive line.”

Spitz played cornerback back then, too, before shifting to safety for the sophomore team in ’15. He collected six interceptions in each season. His sophomore team finished with an 8-1 record.

“Our class is not accustomed to losing,” says Spitz, who is looking at Bowdoin College, Amherst College, Carnegie Mellon University and Washington (Mo.) University but has yet to decide if football will be a part of his life as a collegian.

His roles for his final Giants grid team are more definitive.

“I plan to encourage everybody and get my teammates amped up for every play,” says Spitz, who continues to draw inspiration from his hard-working parents, Joel and Margo. “I like pouring my heart into every minute of every game, since there are only nine games in the regular season.

“I like to tackle, hit hard, and I like to play with an edge, with a little anger.”

Notable: HPHS opens its football season Aug. 25 (7 p.m.) against visiting Libertyville High School. The Wildcats finished with a 5-5 record last fall, losing 42-17 to Bradley-Bourbonnais in a Class 7A playoff opener. Had both LHS and HPHS won their playoff openers last fall, they would have faced each other in the next round.