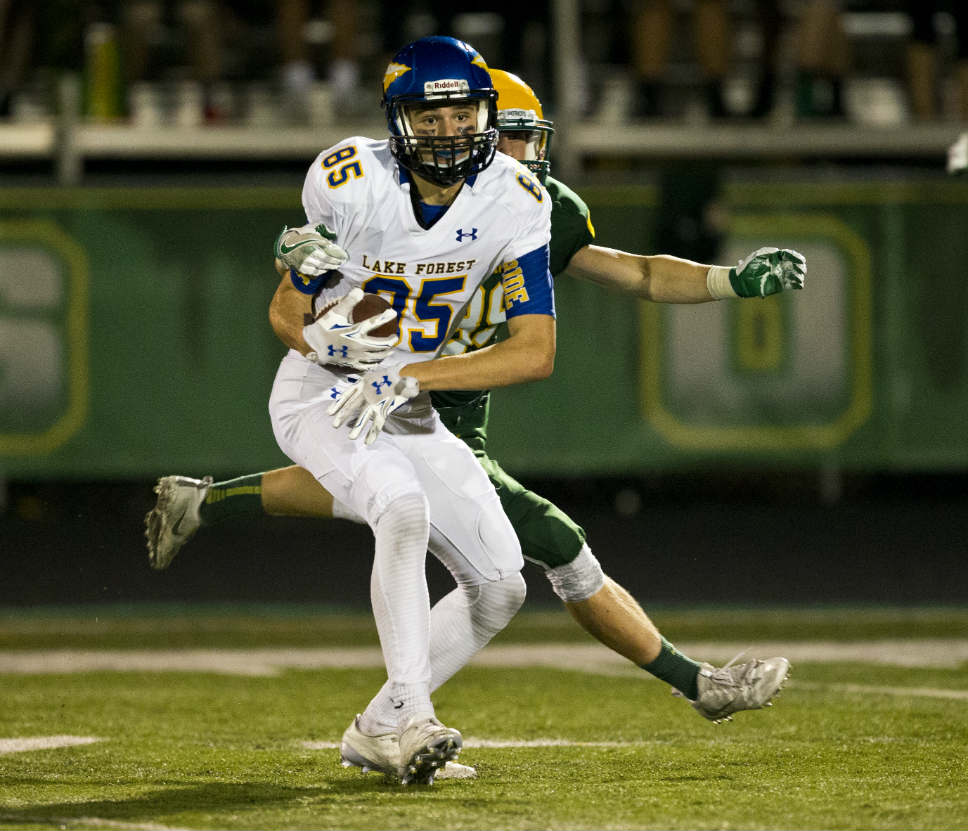 Ryan Cekay of the Scouts tries to break a tackle after hauling in pass against Stevenson during the 2016 football season. PHOTOGRAPHY BY JOEL LERNER

Ryan Cekay was a quarterback, always a quarterback, whenever he put on the pads and helmet — until football training camp before the start of his sophomore year at Lake Forest High School.

Coaches decided to turn Cekay into a quarterback’s target in 2016.

“I had kind of dabbled as a wide receiver,” says Cekay, who will be a Scouts junior this fall. “Sometimes my teams, when I was in grade school, needed someone to help out at wide receiver.”

A freshman quarterback in 2015, Cekay — after surviving and practically acing a month-long crash course in Catching Footballs and Making Stalk Blocks at the High School Level — lined up at wide receiver for the Scouts’ varsity in the season opener at Glenbard East last August.

The second reception of his prep career, in the first quarter: a 63-yard touchdown in a 30-6 victory.

“Ryan was ready to play wide receiver at that level,” he adds, turning serious. “To start on varsity he had to be, because the offense in the program has tons of formations and requires the receivers to know a lot of routes. To do what he did, to pick up things as quickly as he did, was not easy, especially for a sophomore.”

The former QB finished with 30 receptions for 558 yards (18.6 yards per catch) and six TDs for an 8-4 squad that reached a Class 6A state quarterfinal.

“I did not think I’d be able to make the transition from quarterback to receiver,” admits the 6-foot-3, 185-pound Cekay, who hopes to weigh 195 pounds by the season opener (Aug. 25, vs. visiting Glenbard East). “I have to thank my coaches, all of them, for teaching me so much. [Receivers coach and former Chicago Bears wideout Ahmad] Merritt was great, with his NFL background, and so were [head coach Chuck] Spagnoli and [offensive coordinator Phil] DeWald.

“The most challenging part of the whole experience was learning to run-block; I needed to work on that a lot.”

Cekay nearly needed a personal assistant to help him keep track of his commitments to football camps this summer, including two organized by Northwestern University (with one named “Chicagoland Showcase”) in June. Before heading to Stanford University for another camp later in June and showing up for the start of Scouts camp on June 26, Cekay arrived at the University of Notre Dame for the two-day, invite-only Irish Invasion camp in South Bend.

More than 60 players (from the 2018 and 2019 classes), some of whom had verbally committed to the program, attended the ND camp.

Cekay and Rees got together for the first time during the Irish Invasion weekend June 9-10.

“I’d heard all about Tommy and the legendary things he did on football fields in high school,” says the speedy Cekay, who ran a career-best 4.598 in the 40-yard dash at a Rivals speed combine in late May and clocked a personal-best 4.18 in the shuttle run to go with his 10-foot effort (another personal best) in the broad jump at one of the NU camps. “But I had never met Tommy before this summer. Tommy called Coach Spagnoli up and had something to do with me getting an invite to the Invasion.

“I was shocked when I found out about the invite. What a great guy, Tommy Rees. He turned out to be exactly the kind of guy I thought he’d be.”

On the second day at ND, Cekay conversed and ate with current ND gridders. Picture a cypress tree dining next to sturdy houses.

“They ate so much food,” Cekay recalls. “It was unbelievable.”

Cekay, while growing up, was a “huge baseball guy” and played the game (third base and left field) at LFHS in his freshman and sophomore years. His favorite player was former New York Yankees shortstop Derek Jeter — and not just because of the splendid stats Jeter amassed in a 20-year career.

“Such a great role model, and he was classy on and off the field,” says Cekay, who in his free time, likes to play the acoustic guitar and listen to alternative rock, including tunes by his father Michael’s favorite band, Oasis. “Jeter is kind of small, like me. Watching him motivated me as an athlete, pushed me.”

On football fields this fall, defenses will have to deal with a bigger, faster, stronger and more knowledgeable Cekay. No longer the green receiver with an extensive QB background, Cekay will be up for any challenge thrown his way.

One former teammate sees an unflinching Cekay going up against top-notch defensive backs and reaching another level.

And coming down with a heap of receptions.

“Ryan is a hard worker with a whole lot of natural ability,” Reinkemeyer says. “Fast, good hands, good route-running abilities. I also like Ryan’s confidence. A really good receiver has to think he’s better than the guy lining up against him, and that’s the way Ryan thinks. When you’re a quarterback, you want a guy like that on your side, and a guy like that gives you confidence.

“On every play this fall,” he adds, “the guy defending Ryan will realize the importance of giving a full effort. Ryan will have to match that intensity — and he will.” 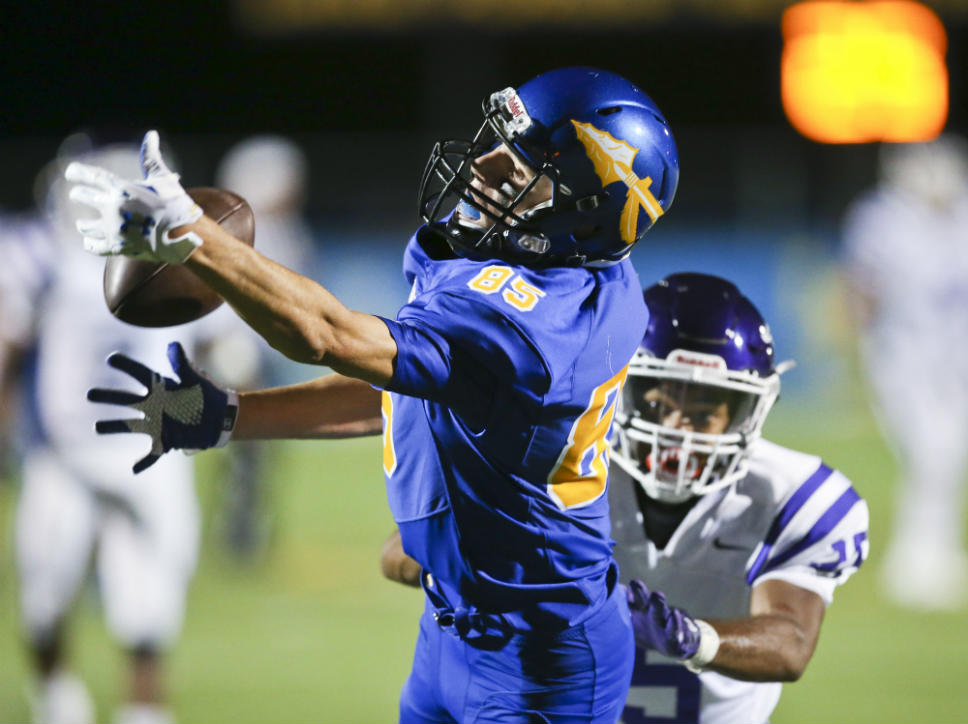