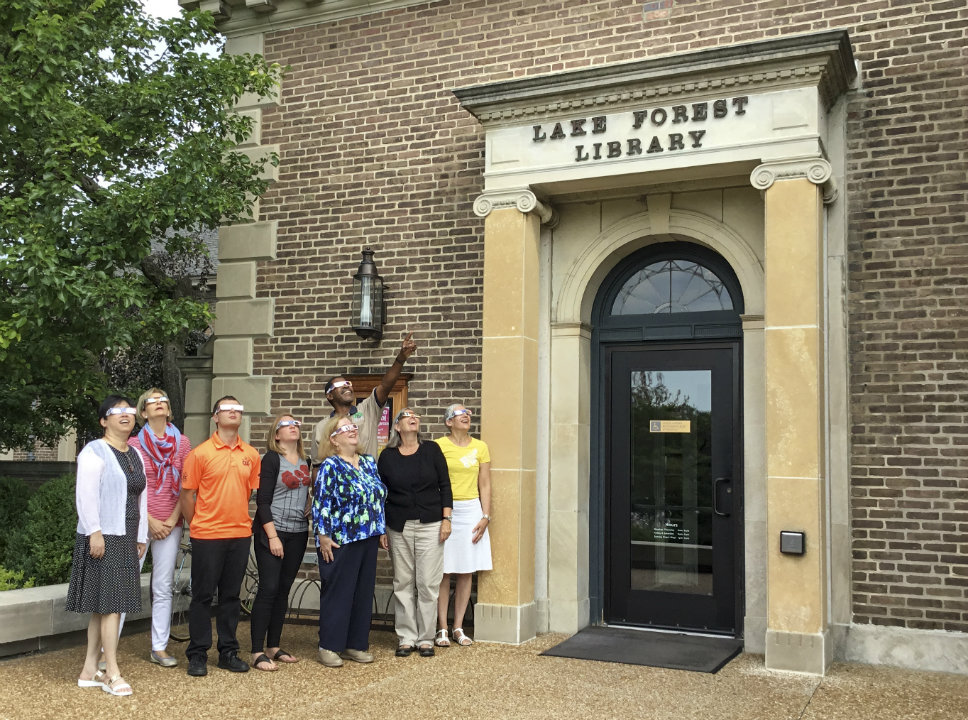 LAKE FOREST/LAKE BLUFF — Glasses to safely view the solar eclipse on August 21 are available for free at both the Lake Forest Library and the Lake Bluff Public Library.

In Lake Forest, the library purchased 500 pairs of glasses with solar filters necessary to view the eclipse without damaging eyes. It will start to hand them out to Lake Forest residents at 9 a.m. August 14, for as long as the supply lasts, according to Library Director Catherine Lemmer.

The Lake Bluff Library is already giving out the glasses, according to Eric Bailey, library director. He said the response is strong and there is no residency requirement.

“We started out with 100 but we’ve ordered a bunch more,” Bailey said. “There won’t be another (eclipse) viewable here for seven years and we want everyone to be able to view it safely.”

Lake Forest is doing more than handing out glasses. Lemmer said the library is turning the solar eclipse into a community event between noon and 2 p.m. August 21 at the library, with public viewing on a big screen television and other events.

“People will remember what they were doing on a special day,” Lemmer said. “I remember watching the moon landing with my parents on a 13-inch black and white TV. We’ll be watching this on 72-inch high- definition.”

People can watch NASA’s feed of the eclipse on the TV in the library’s foyer, or they can view it on the lawn through glasses or a pinhole camera, according to Lemmer.“We want people in the community to celebrate the eclipse together so they get an opportunity to see it with their friends and neighbors,” said Lemmer.

During the two-hour event, there will be glasses available for people to borrow. Staff members will also help people make pinhole cameras to safely watch the eclipse on a reflection.

Along with eclipse watching, there will be snacks and coloring activities for children. There will also be a presentation on the subject from Chris Schoenherr, the library’s emerging technologies librarian.

Both Lemmer and Bailey stressed the safety aspects of watching the eclipse and not staring directly into the sun. Click here to read warnings posted by NASA.

Though the eclipse will be viewable throughout the United States, Illinois is one of 14 stages where there will be a 100 percent eclipse, according to the NASA website.

Lake Bluff has no special eclipse watching event planned August 21 at the library, according to Bailey.