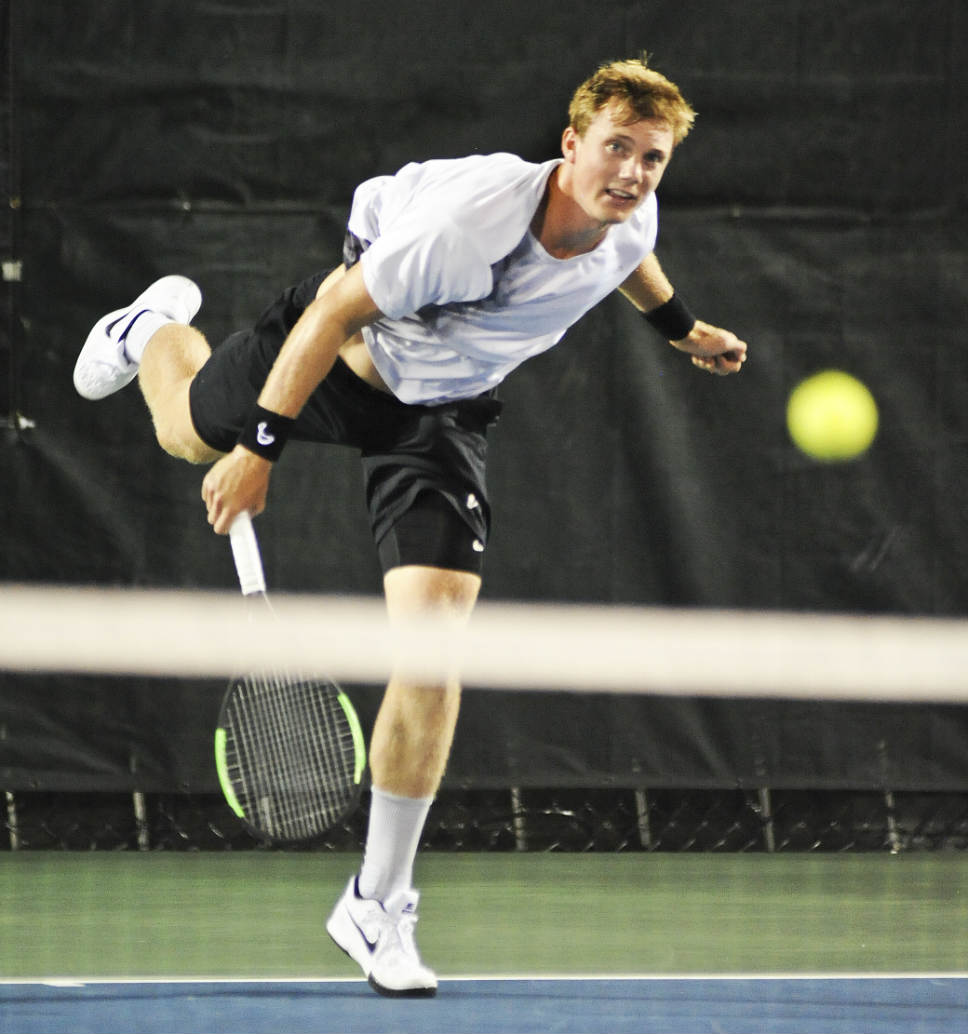 One of Tom Fawcett’s best friends showed up just in time at the NCAA Men’s Tennis Championships in Athens, Georgia.

The buddy of the then Stanford University junior and 2014 New Trier graduate didn’t say a word, didn’t clap once, didn’t cheer once at the tournament in late May.

The 6-foot-6, 215-pound Fawcett — seeded eighth in the tournament — used his formidable first serve to make an impressive run to the semifinal round, where he lost 6-3, 6-2 to eventual singles champion Thai-Son Kwiatkowski of the University of Virginia.

“I was not playing my best tennis at the start of the tournament,” recalls Fawcett, who reached the doubles final (with Drew Campbell) at the Illinois High School Association state tournament in 2011, his freshman year at NT. “I had to work my way into it. The biggest thing was my serve — I hit it well, and it ended up giving me more confidence in other parts of my game.

“The speed of the serve,” he adds, “wasn’t as important as the placement of the serve was; the most important thing for me was to hit the serve wide at times. I like to focus on hitting serves at good angles.” 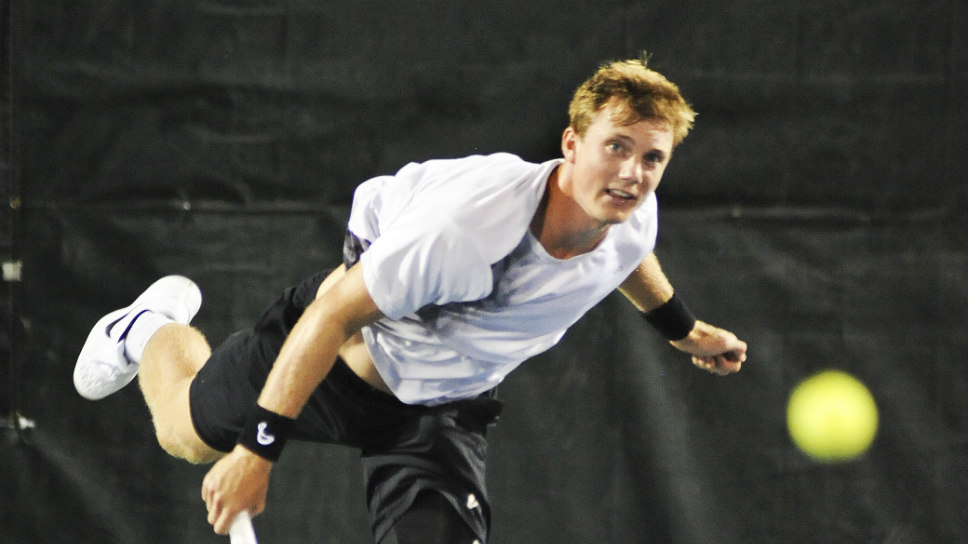 Tom Fawcett uncorks a serve during play in the Challenger Tournament at A.C. Nielsen earlier this summer. PHOTOGRAPHY BY GEORGE PFOERTNER[

Fawcett, a Winnetkan with one more year of college eligibility, returned to his hometown earlier this month to display his serve and compete in the annual Challenger Tournament for professionals and amateurs at the A.C. Nielsen Tennis Center. Stanford’s No. 1 singles player — a recipient of a wild card entry from Challenger officials and now a four-time Winnetka Challenger entrant — lost 6-2, 7-5 to UCLA’s No. 2 singles player, senior-to-be Martin Redlicki, in a first-round match on July 11.

The 6-5 Redlicki lived in Lake Zurich for years before moving to Boca Raton, Florida. His older brother, Michael, played No. 1 singles at the University of Arkansas in the spring.

“Martin played really well and with a lot of confidence,” says Fawcett, a Science, Technology & Society major who finished his junior season at Stanford with an overall record of 22-10 and a national singles ranking of No. 11. “I was a little rusty, having not played in a tournament since the NCAAs. But it was a great experience; I gained something from it, and I will use that knowledge in other tournaments this summer.”

Including Futures tourneys on clay courts in Estonia and Finland. Fawcett, along with a couple of his Cardinal teammates, was set to battle in Northern Europe in late July and early August. Futures events are like Challenger tournaments, in that each series serves as a pro tour minor league.

“That’s the plan — to play professional tennis, to consider tennis my job for however many years after my final year at Stanford,” says Fawcett, named an all-PAC men’s tennis player and the PAC-10 Singles Player of the Year in 2017. “I know I have to continue to develop my game, and what’s going to be really important is to make sure my serve is big and effective enough to help me shorten up the points, finish points quickly.”

“It’s been a joy to work with Tom,” says Goldstein, who guided the No. 16 Cardinal to an 18-9 record and second straight Round of 16 appearance in the team portion of the NCAA Men’s Tennis Championships in the spring “His work ethic stands out more than anything else does. His serve … it’s such a weapon. And he moves quite well for a player his size. That run he made to the NCAA semifinals was a great one. It was a reward he deserved for consistently putting in the hard work.

“Off the court he’s fun, with an infectious personality,” the coach adds. “He’s a natural leader. In social settings, people want to be around him, enjoy being around him.”

The 29-year-old Querrey is ranked 23rd in the world.

Fawcett, blessed with a serve that’s a sight to behold, has his sights set this summer on beating seeded netters at Futures tourneys — and on sightseeing.

“I’m really looking forward to traveling and seeing places in other countries for the first time, as well as hitting the beaches with other players in between matches,” says Fawcett, who played his Futures matches stateside last summer.

Notable: Two other local products — brothers and New Trier graduates Jared and Aron Hiltzik — played in the Winnetka Challenger earlier this month. Both grew up in Wilmette. The elder sibling, Jared, fell 4-6, 6-3, 6-2 to Australian Omar Jasika in the first round of the main draw on July 11; Aron, a junior at the University of Illinois (Jared’s alma mater) in 2016-17, beat Robert Galloway as the No. 3 seed of the Challenger’s qualifying tournament and lost 4-6, 6-4, 6-4 to Logan Smith in the main draw. Aron Hiltzik went 19-7 in singles overall (6-1 in the Big Ten) this past spring, beating five Intercollegiate Tennis Association-ranked opponents while competing mostly at No. 2 singles for the Fighting Illini. In three seasons he owns an overall singles mark of 75-25 (21-2 in Big Ten action). … Australian Akira Santillan, 20, defeated 22-year-old Ramkumar Ramanathan of India 7-6 (1) 6-2 in the championship match of the Winnetka Challenger on July 15. Santillan is ranked No. 171 on the ATP Tour, three spots behind Ramanathan.