Something is haunting the North Shore, and it’s not that end-of-summer feeling. It’s skunks — the animal you least want to see looking at you in the eye — or worse, facing you from the rear.

Squirrels and raccoons used to be the No. 1 complaint among customers of Animal Control Specialists in Northbrook, but skunks have claimed the top spot in the recent years, owner John Hagan told DailyNorthShore in 2016.

There are many theories as to why the population is so large on the North Shore. One is simply that skunks are an indigenous member of the area’s forest ecosystem. Another is that the U.S. Naval base in Glenview, which had expansive open land, was once a skunk habitat, and the skunks spread across the North Shore when The Glen was developed. (Though that could just be urban legend, said Lynne Stiefel, communications manager for the Village of Glenview, adding that whatever wildlife was forced to relocate has long since settled elsewhere.)

Also worth noting: Skunks like railroads. According to the Illinois Department of Natural Resources (IDNR), skunks are particularly prevalent in urban areas along railroads because tracks provide travel ways and denning sites. Skunks typically don’t make their own homes, instead creating dens from burrows made by other animals. But during warmer weather skunks tend to den above ground, and may sleep under porches, stoops, decks, sheds, or foundations — to the horror and chagrin of the humans who live nearby. 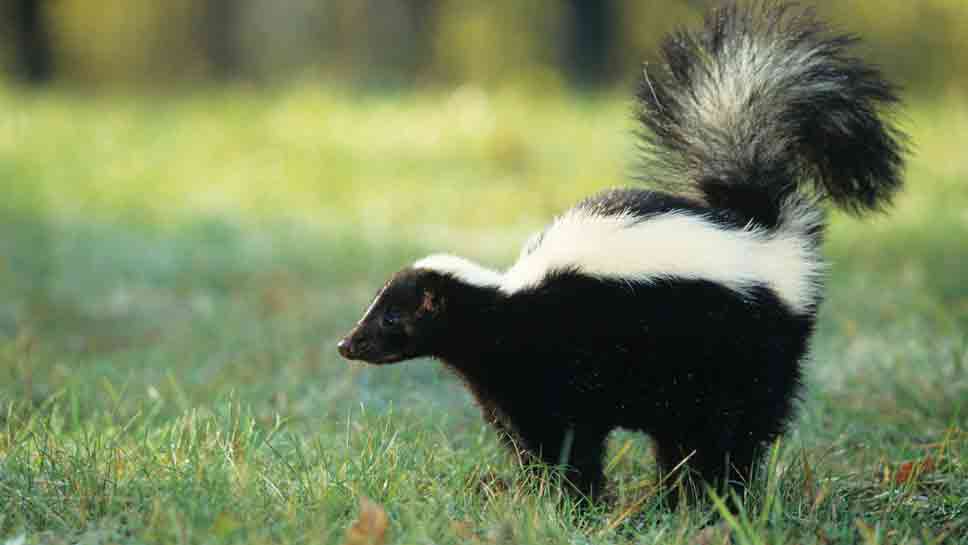 There are several options for de-skunking a pet, and they all share one common ingredient: time. It can take several treatments and up to a few weeks for the smell to finally go away.

Rob Carmichael, curator of Lake Forest’s Wildlife Discovery Center, offered two additional theories about the North Shore’s skunk population. He said skunks have redistributed to be closer to human habitation because our wet, buggy summers have provided more food for them. He also pointed out that Great Horned Owls are the skunks’ biggest predator. “Stop using rodenticides and you will see more owls and fewer skunks,” he said. “Rodenticides are causing great horned owls to die at alarming rates.”

As skunks have settled into area yards, parks, and the crannies of homes, they are especially troublesome for pets, often leaving a sickening odor on dogs and cats with an oily spray that penetrates their fur and skin.

From home remedies to grooming techniques, owners of skunk-sprayed dogs have tried different approaches to rid their pets of the awful scent. DailyNorthShore investigated what is out there and what really does the trick in getting the odor off freshly sprayed dogs. These may work for cats too — but we primarily asked about dogs.

First, we turned to our local animal hospitals to see what they recommend. While veterinarians do not typically provide treatment for dogs that are sprayed by skunks, they do offer recommendations.

Representatives of Winnetka Animal Hospital and Green Bay Animal Hospital suggested going to a groomer as soon as possible or turning to the internet for advice. Many people utilize the homeopathic bath of one quart hydrogen peroxide, 1/4 baking soda, and 1 teaspoon dish soap— the brand Dawn is frequently mentioned in online de-skunking recipes. This remedy often is used by both groomers and pet owners.

While some try other products such as Nature’s Miracle Skunk Odor Remover, veterinarians still suggest the homeopathic approach. “I haven’t found anything that works better,” said veterinarian Erica Periman of Green Bay Animal Hospital, referring to the homemade peroxide formula.

Periman said the remedy won’t hurt the dog, but it may lead to further complications, particularly if the dog is sprayed in the face. This is often the case, as dogs frequently attempt to smell the skunk once they have noticed it.

“If your dog is sprayed straight in the face, it can really damage the dog’s eyes. It is very hard to clean the face of a dog completely,” said Periman. “If you find your dog squinting or losing tolerance to bright light after the experience, bring your dog into the office immediately.”

How often pets need to be bathed in the peroxide solution depends on the specific dog and how much of the skunk spray it absorbed. The fur of some breeds holds the scent longer, and some dogs are simply hit more directly. Periman pointed out that she “can typically sense the scent several months after a dog has been skunked.”

Love Fur Dogs owner and certified master groomer Jennifer Bishop-Jenkins does not use the peroxide formula at her grooming shop in Glencoe. Blown away by the growing number of the skunks on the North Shore in the past few years, Bishop-Jenkins decided to research the issue to find an alternative solution.

Bishop-Jenkins shared that skunk spray is an “oily, complex scent” that is difficult to defeat. The human nose can detect 10 parts per billion, picking up even the faintest amount of it. This means it is important to act quickly before the oil spreads.

Bishop-Jenkins said the first step may be to use the homeopathic approach if a dog cannot be brought to a groomer right away. She pointed out that the treatment can be hard on dogs’ skin or coat, as she has seen dogs that are left bleached or with rashes after the peroxide treatment. She also said home bathing leads to a higher risk of spreading the skunk oil around your home. 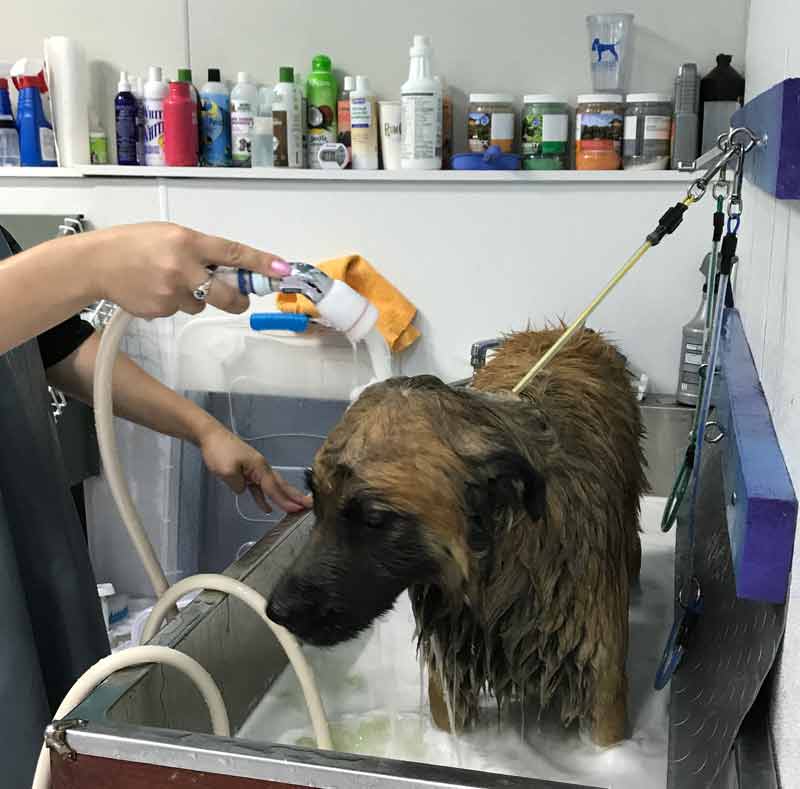 At Love Fur Dogs, Bishop-Jenkins said she has found “the only thing that can solve the problem:” the Thera-Clean Microbubble machine. Using only air and water, the new technology floats the skunk oils out of the pet’s skin with microscopic bubbles.

“It is gentle, natural, and amazingly effective and can solve all skin problems for dogs,” said Bishop-Jenkins. “3/4 of skunk treatments you can get all of the oil out, otherwise a second round may be needed. It is the only skunk-spray treatment which can fully clean a dog’s face as well.”

Love Fur Dogs charges a $25-$40 add on, depending on dog size, to typical grooming prices for the treatment.

Regardless of treatment method, all specialists agree that the most important component to the pet-skunk conundrum is prevention.

“They live right next to us, in our porches and parks. The best medicine is avoidance,” said Periman. She suggested that owners step into the yard before letting their dog out when skunks are most prominent, at dawn, dusk, and night.

Bishop-Jenkins suggested not letting dogs off-leash at all, and keeping them away from bushes.

She also warned that if your dog is sprayed, keep it out of your house, as skunk oil is nearly impossible to get out of the porous fibers of furniture. Crate your dog or keep it in a bathroom, laundry room, or garage if necessary, and have it treated as soon as possible.