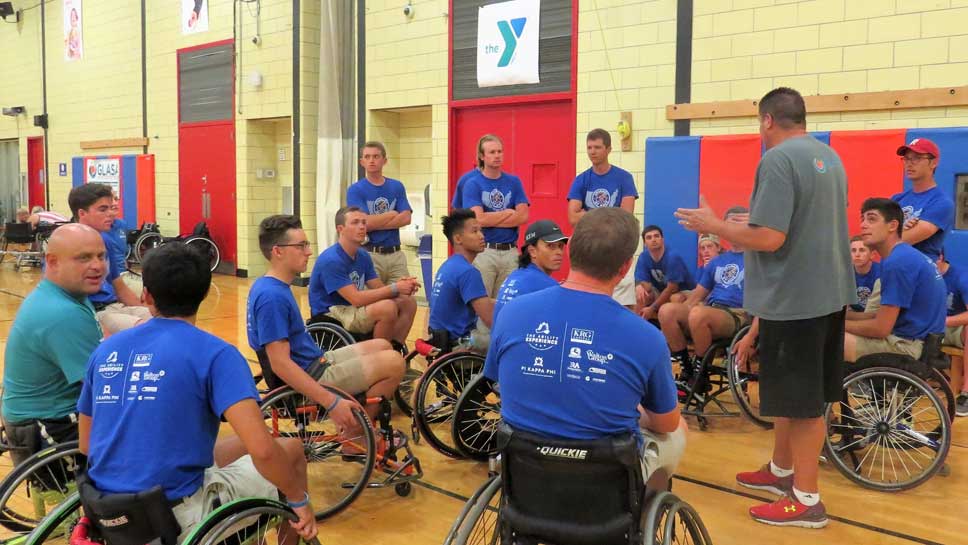 When the 30-person cross-country Journey of Hope cycling team pulls into Northbrook on the afternoon of July 25 to spend their 45th night on the road since leaving California on June 3, they’ll receive a warm, Midwestern welcome from supporters gathered at the North Suburban YMCA (NSYMCA) on Techny Road.

The NSYMCA has been an overnight host to the philanthropic cycling team for the past eight years, providing riders with hot meals, showers and a place to rest until they hit the road the next morning.

Each summer since 1988, three Journey of Hope teams originating in San Francisco, Los Angeles, and Seattle – solely comprised of members of the Pi Kappa Phi national fraternity- ride across 32 different states fundraising and spreading a message of acceptance and understanding for people with disabilities. The team rides an average of 75-90 miles a day, making as many as 65 overnight visits to churches, corporations and community centers along the way until they reach Washington, D.C. on August 11th.

But at their Northbrook rest stop, the weary Journey of Hope cyclists will be greeted with a new challenge.

Two years ago, staff at the North Suburban Y decided to use the annual friendship visit as a wider teaching moment for the local community. After pulling in, parking and catching their breath, the cyclists will trade their bicycles for a wheelchair to compete in a the 2nd Annual “Wheels vs. Wheels” Football Game against athletes from the Great Lakes Adaptive Sports Association (GLASA), a Lake Forest-based non-profit dedicated to empowering people of all ages with physical and visual disabilities to be healthy and active through sports.

Free and open to the public, last year’s game drew an estimated 150 spectators. Those who watched described the friendly scrimmage as “high energy,” and packed with all the rough and tumble action you’d expect from a football game.

“When I saw the game last year I was utterly shocked, “ said event organizer, Kathy Fielding, who serves as Vice President of Membership, Engagement, Marketing & Programs at the NSYMCA. “These guys ram into each other at full speed with one hand on the wheelchair and the other hand holding the ball.”

Fielding says scoring at the game is monitored, but not formally, and that the Journey of Hope cyclists don’t play a full game. Instead, relief comes after half time when members of the Northwestern Football team take their place, demonstrating first hand the challenges disabled athletes must overcome.

“Many of the Northwestern players last year were surprised to discover how difficult wheelchair football really is,” said Fielding. “I overheard one of them saying, ‘we play football all the time and this is tough.’”

Thanks to the success of last year’s game, the NSYMCA has been able to engage new corporate supporters for the event, including Whitehall of Deerfield, BY YOUR SIDE Autism Centers, Waterway Carwash and Real Urban BBQ.

In addition, Pat and Stacy Fitzgerald, head coach of Northwestern Wildcats Football and President of North Shore Youth Football respectively, are lending their support to the Wheels vs. Wheels Football Game for the second year in a row.

As part of the NSYMCA’s pre-game entertainment, young players from the North Shore Youth Football league will meet the Northwestern players and run football drills in youth-sized wheelchairs. Demonstrations and the Northwestern University Football “meet and greet” will begin at 6:30 pm, followed by the Wheels vs. Wheels showdown.

“The Journey of Hope team’s visit has become a cherished Y tradition, and our partnerships with GLASA, Northwestern Football, and North Shore Youth Football have expanded the event to bring a wider spectrum of the community together,” said Kim Nyren, the NSYMCA’s director of community investments.

Organizers say the event is designed to raise awareness and support for local families with disabilities, a group the North Shore YMCA loves to rally behind.

“Journey of Hope’s motto is that no one should sit on the sidelines,” said Nyren. “This event is visual proof that this is possible.”