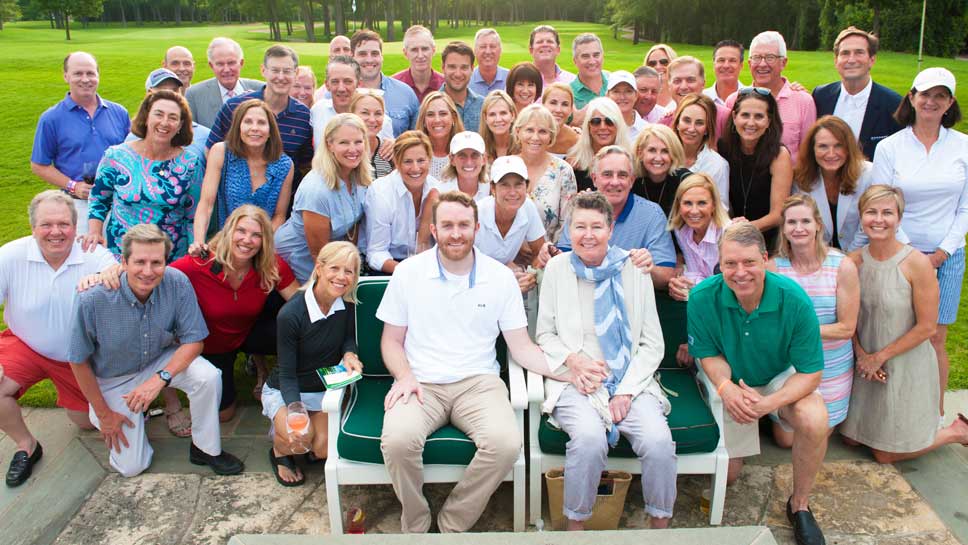 Honorary survivor Kathy Mignin is seated with her son, Peter Mignin, surrounded by many of the participants of the William T. White Jr. Memorial Golf Tournament.

In 1981, William T. White, Jr. initiated a golf tournament to bring friends and interested people from the community together to raise funds to support the American Cancer Society. In recognition of his generosity, the tournament is now named in his honor after his death from leukemia in 1993. Now his son, Bill White, serves as the event’s chair.

One hundred percent of the funds raised from the event this year go to cancer research in honor of brain cancer survivor Kathy Mignin. “Kathy has been a longtime supporter of this event and served on the Executive Committee for a number of years,” said participant and friend of Kathy’s, Susan White. “Kathy’s love of golf has been an inspiration to many of us. And now she’s inspiring us with her perseverance and positive attitude in her battle against this terrible cancer.”

The success of this event could not be possible without individual and corporate sponsors. For more information about those sponsors, please visit www.acswtwgolf.org.

Submitted by the American Cancer Society
The American Cancer Society is a global grassroots force of 2 million volunteers saving lives in every community. As the largest voluntary health organization, the Society’s efforts have contributed to a 25 percent decline in the cancer death rate in the U.S. since 1991, driven by less smoking, better treatments, and earlier detection. We’re finding cures as the nation’s largest private, not-for-profit investor in cancer research, ensuring people facing cancer have the help they need and continuing the fight for access to quality health care, lifesaving screenings and more. For more information, to get help, or to join the fight, call us anytime, day or night, at (800) 227-2345 or visit cancer.org.