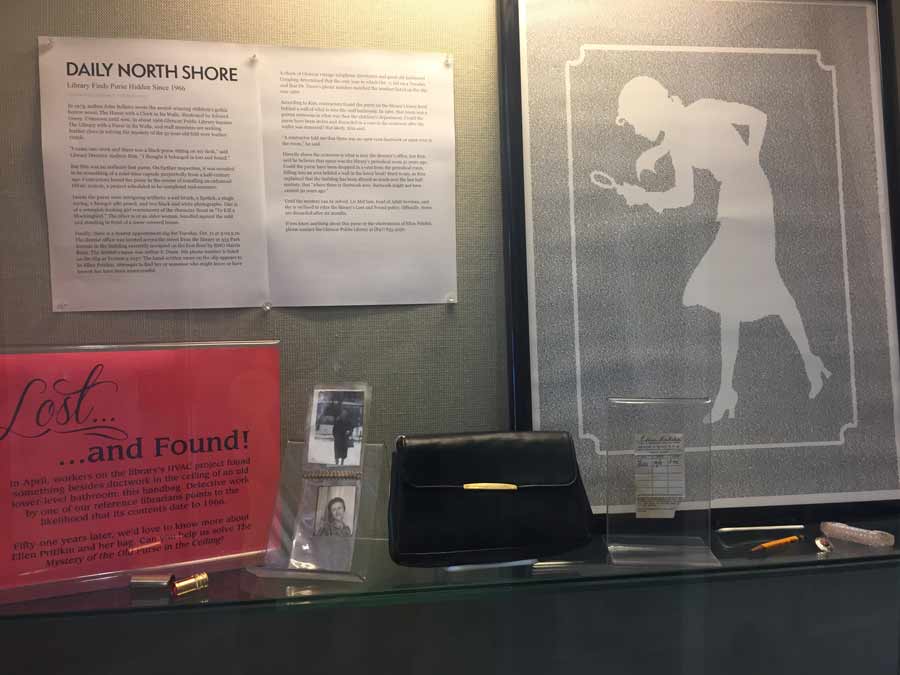 Glencoe librarians put together a display on the hidden purse mystery.

Ellen Pritikin Polito confirmed in an email that she is the woman whose long-lost purse recently was found after more than a half-century inside a wall at the Glencoe Public Library. But she has no clue how the black leather clutch got there. “Perhaps it was stolen and dumped there?” she suggested. “I have no idea.”

Contractors located the purse in the course of installing an enhanced HVAC system at the library, and DailyNorthShore reported on the mystery on July 6. Inside the purse were several items that included, among other things, a tube of red lipstick, a photo of a young girl, and a photo of an older woman standing in front of a snow-covered house. But the purse’s most telling clue to locating the owner was a dental appointment slip made out to “Ellen Pritikin.” The dentist, Dr. Authur S. Dunn, had an office across from the library at 333 Park Avenue. Research showed that the phone dentist’s phone number listed on the slip was from the 1960s.

Polito, who will turn 71 this summer, lives in Berkeley, California, with her husband of 45 years, Dr. Vito Polito, who is a pomologist and a Professor Emeritus at University of California, Davis, as well as co-chair of the UC Davis Olive Center. According to its website, the Center addresses “the research and education needs of California olive growers and processors.”

Polito herself is a former public art administrator. She and her husband moved to Berkeley nine years ago following her retirement. She is currently a history docent at the Oakland Museum of California, working with middle school students on how to use artifacts for investigation and inquiry. “The idea that my own artifact became a mini-time capsule is charming. You’ve given me a perfect object lesson,” she said.

Since this story was published in DailyNorthShore last week, it was featured on WBBM Newsradio 780. According to Glencoe Public Library Director Andrew Kim, the staff has fielded calls from as far away as Maine from people intrigued by the mystery of the purse, and with possible leads as to Pritikin’s whereabouts. One woman called to say she remembered Pritikin as a New Trier classmate.

Library staff took finding her as a research challenge. Initial calls to Pritikins listed in local telephone directories yielded no leads. One Google search found that an Ellen Pritikin had graduated from Evanston Township High School in the 1960s, but she had not registered with the reunion committee. The staff ultimately found Polito through other online sources.

When informed by the library via email about the saga of her purse, she said, the news “made my day, week, month, and possibly year.” In response to a follow-up email from DailyNorthShore, she said her reaction to the discovery of her purse and the interest it had generated was “amusement at first. Afterwards, I spent a lot of time remembering my years in Glencoe,” where she moved from Highland Park when she was 11. “I volunteered at the Glencoe Public Library when I was in the 7th and 8th grades at Central School,” she said.

Although she graduated from Evanston Township High School, she did attend New Trier her freshman year. “Kudos,” she joked, “What a long memory the woman who phoned the library (about me attending New Trier) has.”

The library sent her photos of the purse and its contents. “I have no idea who the girl (in the picture is),” she said. “Probably a friend from camp whose name is lost in the ether, but the (older) woman is my grandmother Fanny Pritikin. The house in the photo is my aunt’s house in Kewanee, Illinois.”

Polito acknowledged that the leather clutch was perhaps a more mature purse than one a young woman might carry. “Style-wise I was a free thinker when it came to choosing my clothes,” she said. “Not typical in the late 50s and 60s.”

Does she still carry a clutch? Today, she said, her purse is much bigger. It’s “a black bag made from recycled materials and with pockets for everything!”

The clutch and its contents are currently on display at the Glencoe Public Library.