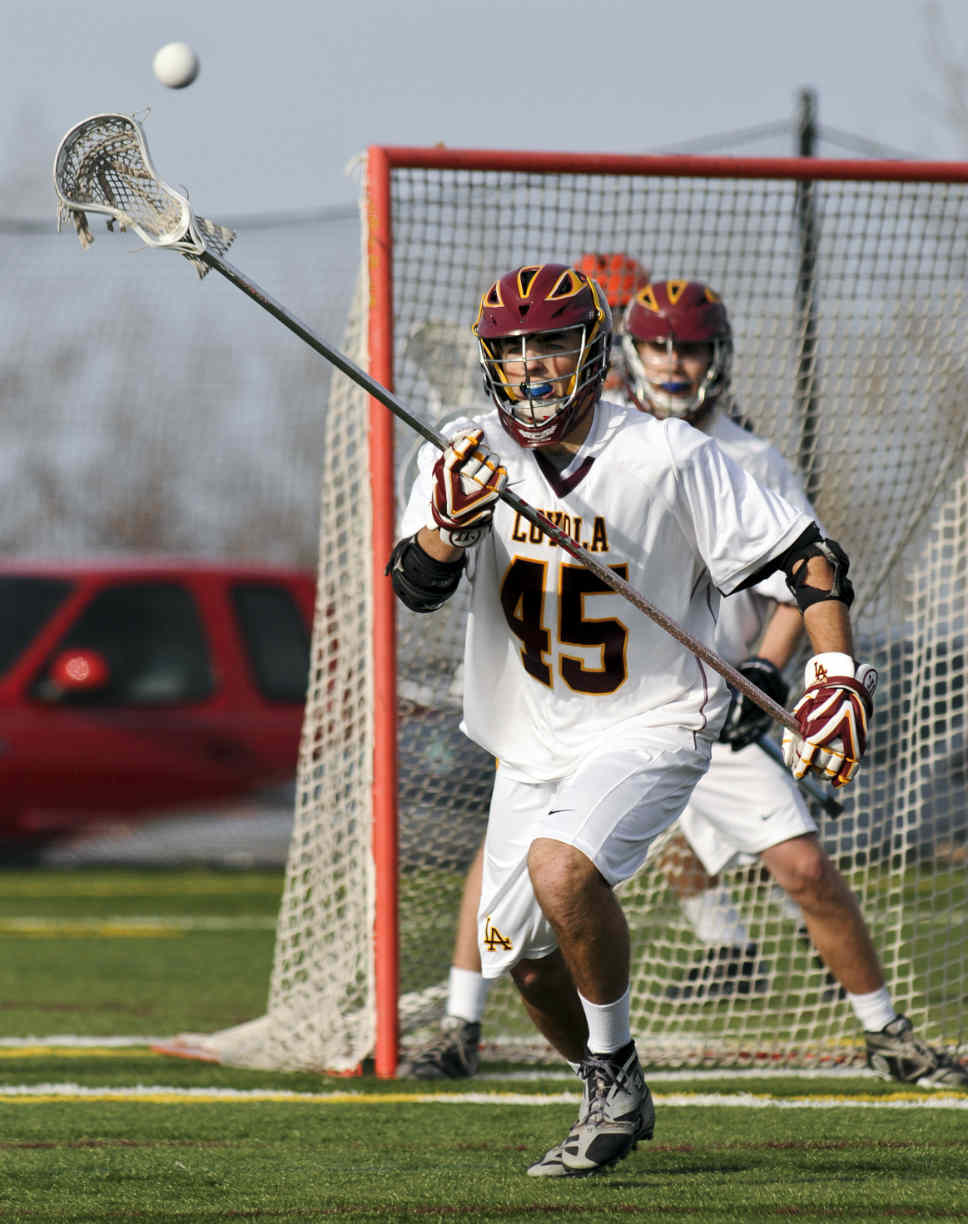 Kyle Koch recently completed a phenomenal career at Loyola Academy. The defenseman was a four-year starter and three-time All-American. PHOTOGRAPHY BY GEORGE PFOERTNER

Kyle Koch was all set to become a Glenbrook South freshman in the fall of 2013 — until a lacrosse game a few months earlier made him pivot and head east toward Wilmette.

“I went to the [IHSLA] state championship game between Loyola Academy and New Trier,” recalls Koch, a Glenview resident who had moved from Arizona to Illinois before he started eighth grade. “I was in the stands [at New Trier’s Northfield campus], with my father [Jeff] and with my younger brother, Connor. Loyola won. Great game.

Koch went to Loyola Academy. And he put together quite a career, playing varsity for four seasons and earning US Lacrosse All-America status from 2015-17. Koch, a defenseman with sprinter’s speed, and the Ramblers faced New Trier’s Trevians in three state finals (2014, 2016 and 2017).

The men’s lacrosse program at Marquette University — Koch’s next stop as a student-athlete — is certainly thankful for the audible Koch called in that bleacher seat on a sunny day four years ago. The 5-foot-9, 170-pounder ranked among the Ramblers’ leaders in caused turnovers and played a major role in helping LA (17-8 overall, 17-1 vs. Illinois teams) finish with a state-low — and state-record-tying — 2.71 goals-against average this past spring.

The Team ONE lacrosse club player hadn’t scored more than one goal in a varsity game until he struck for a pair of tallies in a 15-6 defeat of Glenbrook North on May 16. The second goal flew from his stick’s webbing from about 16 yards out and rose like a heater from a pitcher as it neared the Spartans’ goalie.

Koch’s top-shelf fastball turned a sluggish outing for the Ramblers into a stirring one.

“Easily one of the best players I’ve ever been around,” says DePauw University-bound Quinn Roddy, a 2017 All-America attackman and another recent LA graduate. “His work ethic is incredible. Kyle is physical, fast and strong, with great stick skills. That combination … it’s deadly.”

Koch was worried about a short life expectancy during his days as a football player in Arizona. Opponents were big; he was not.

The pedestrian pace of play in baseball annoyed him, and in basketball he aced tests on defense but struggled at the other end of the court.

“I was a fifth-grader, maybe a sixth-grader, when I tried lacrosse,” says Koch [pronounced COOK]. “It was fun, and right away I enjoyed the fast pace. I’m guessing there could not have been more than 100 lacrosse kids in the whole state of Arizona when I started playing it.”

Koch figured he wouldn’t make the varsity lax squad as a freshman after coming down with the flu during the week of tryouts. But his speed turned the coaches’ heads, and there it was — his name — on the online list of Ramblers who had made the varsity in the spring of 2014.

“Shocked. I was shocked,” he says.

One of LA’s star defensemen in ’14 was Lake Forest resident Will Nowesnick, who will be a senior at Salisbury (Maryland) University in the fall. The 6-5, 215-pounder caused 44 turnovers for the NCAA Division III champion Sea Gulls (22-1) in 2017.

Koch watched and learned and then started his string of three straight All-America seasons the next spring.

“I was small until my sophomore year,” says Koch, a captain in his junior and senior seasons. “You know what I figured out? That lifting can actually help you … can help you get bigger and stronger. I like to lift; it centers me. A friend of mine [from Lake Zurich High School], a lacrosse player, and I have been working out together regularly in Lake Zurich this summer. What’s good about driving all the way to Lake Zurich to lift is knowing, once you’re there at the fitness club, you might has well do everything you had intended to do.

“It wouldn’t make any sense,” he adds, “to cut the workout short or not give it your all after traveling all those miles.”

Koch got on a train with a friend from Glenbrook South in the spring and attended a Cubs game at Wrigley Field for the first time in his life. As soon as he received an eyeful of the field and the scoreboard and the ivy, the awestruck kid in him made another appearance at another well-attended athletic contest.

“I don’t know much about baseball, and it hasn’t interested him,” he admits. “But I enjoyed that experience, everything about it. I had three or four hot dogs. The best part of the experience? Walking inside the ballpark and seeing that field, the colors, for the first time.”

Koch is a city boy, and if a Chicago college or university with a good academic reputation fielded a men’s lacrosse team, he would have seriously looked into attending it. Marquette’s home, Milwaukee, has a big enough city feel to it for Koch, who will major in biomedical sciences (pre-med) and play lacrosse for a program that went 8-8 in 2017.

Besides, Milwaukee is where Koch’s parent’s, Jeff and Stacy, met.

But before he hits the books and the Golden Eagles’ field, he’ll continue to conduct private lacrosse lessons for kids with former LA teammate Luca Lazzaretto, an All-American defenseman and a member of the Class of 2018.

“We like to joke around and have fun with the kids, while teaching them,” says Koch, whose younger sister, Kelsey, made LA’s girls varsity lacrosse team as a freshman middie in the spring. “They’re fun to be around, and they’re amazed how long our lacrosse sticks are. They want to hold them, but they’re twice the size as some of the kids.

“One kid bought a stick that was too long for him,” he adds. “The kid’s dad ended up cutting the stick in half.”