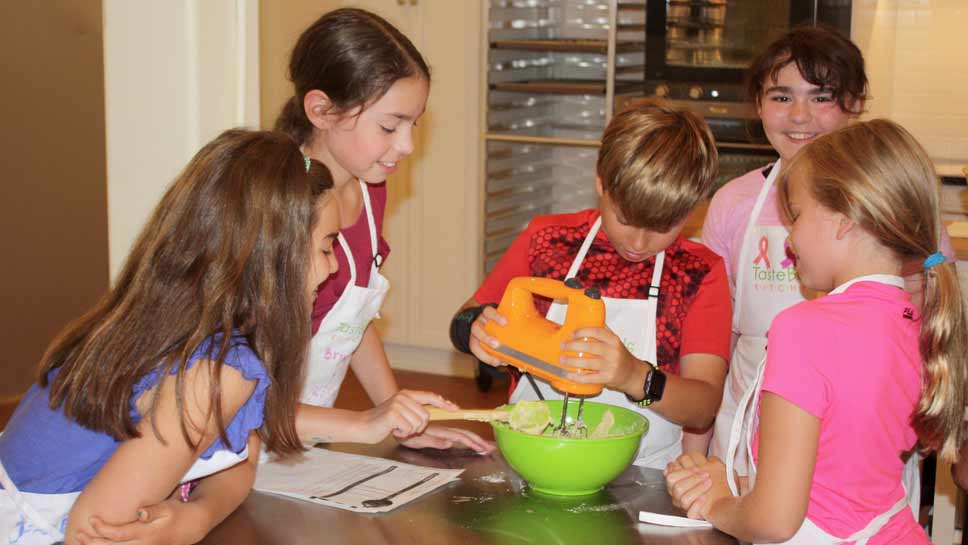 If you can’t stand the heat on a hot summer day, get in the kitchen. That’s the philosophy a group of young chefs adopted during a recent cooking camp at Taste Buds Kitchen, a new cooking school franchise launched in May by Lake Forest resident Amanda Marijanovic.

Most sessions at this three-hour, weeklong recurring summer class are spent learning the fundamentals of baking, including bread, pie, muffin, and cupcake creations, which the students get to sample and enjoy. But on Thursdays this summer, campers whip up treats such as Snicker Doodles and Twisted Twirl Cookies, then cap off the day’s lesson with a sidewalk bake sale to benefit Cookies for Kids’ Cancer, a New Jersey -based national charity that sponsors grassroots bake sales to benefit pediatric cancer research.

In just five weeks since summer vacation began, campers at Taste Buds Kitchen Bannockburn have raised close to $1,000 toward finding effective treatments of childhood cancers, adding to a total of nearly $25,000 raised by six other Taste Bud Kitchens across the country.

According to Marijanovic, the cooking-class-meets-bake-sale concept is just one of many ways the Taste Buds Kitchen works to create community through cooking. Billed as a kids cooking school by day and adult BYOB by night, the business offers a full roster of workshops, school events, weekly classes and parties each week that cater to all age groups and abilities.

“Food inspires shared love and camaraderie among family and friends,” said Marijanovic. “Bringing people together in such a positive way is something that’s very important to me.”

Marijanovic, who built a career in strategic meeting and event design production, wasn’t looking to own a franchise when she returned to her native Lake Forest four years ago with her husband, Mike, and twin boys, Max and Miles, who just turned 9.

After exploring the idea of starting her own cooking school, Marijanovic was drawn to the concept of Taste Buds Kitchen, which launched in 2007 out of a loft in the Chelsea neighborhood of New York City. When the company began to franchise in 2013, Marijanovic jumped on board. There are now seven Taste Buds Kitchens across the U.S.; the Bannockburn site is the first in Illinois.

“Popular TV shows like Chopped and Masterchef, Jr. are creating a renewed interest in food for a younger generation of cooks,” said Marijanovic. “At the same time, these kids come into class with a lot of knowledge and high expectations, so we’re constantly kicking our recipes up a notch.”

“Our cooks use math and reading skills when tackling a recipe, particularly if they’re adjusting it for larger or smaller quantities,” said Marijanovic. “And it’s been proven that when kids actively participate in the preparation of food, they’re much more likely to try it.”

Taste Bud’s charitable bake sales are also a learning experience for kids, as they prepare, package and market the products themselves. Not surprisingly, they’re eager to hear sales tallies when they return to class the next day.

And as much fun as measuring, mixing, stirring and giggling with fellow junior chefs may be, these kids understand the importance of the money they’re raising for pediatric cancer research.

“I have two friends with leukemia,” said 12-year old Libby Yates from Vernon Hills. “When I hear the word ‘cancer,’ I think of them.”