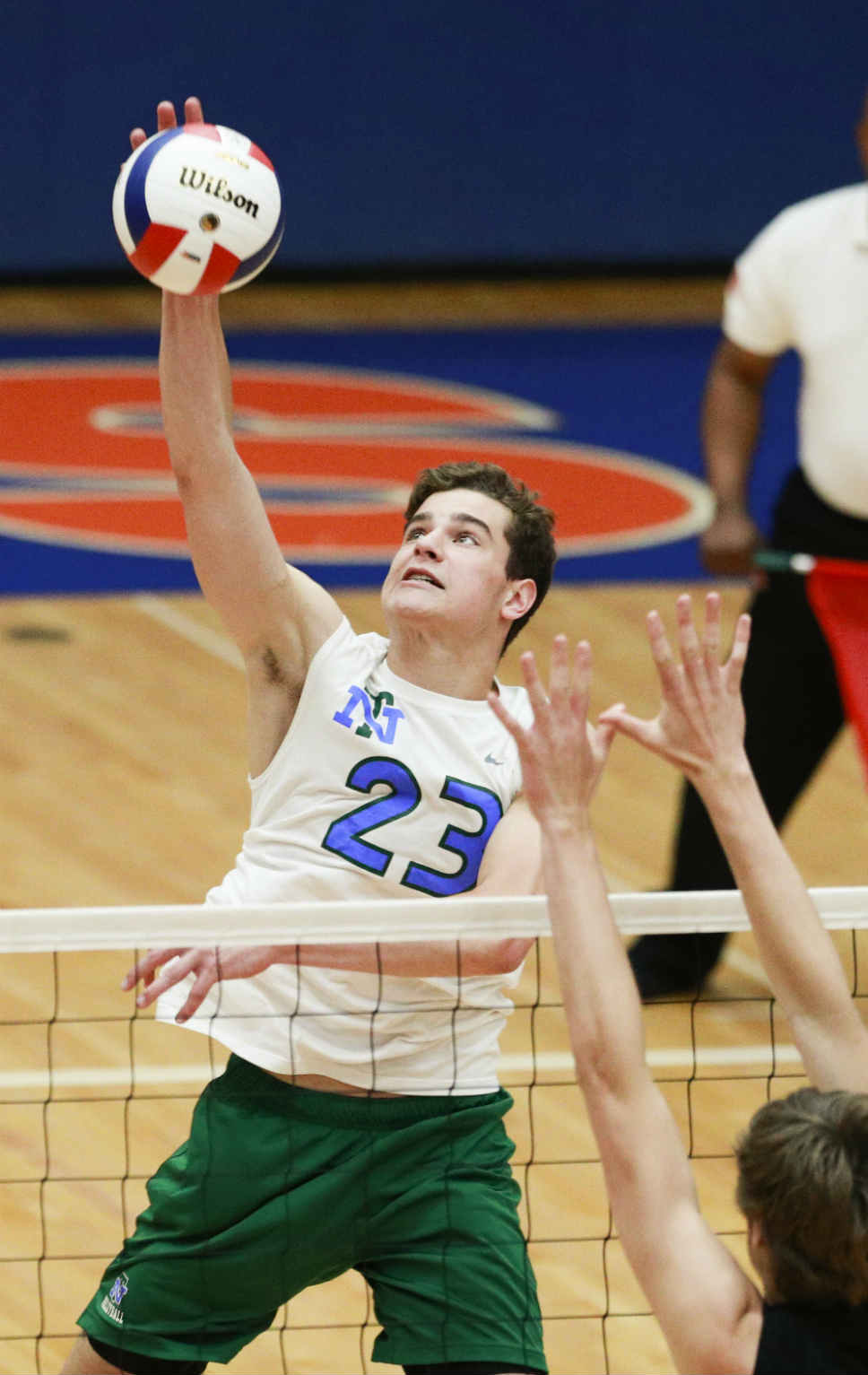 New Trier’s Jack Werd smacks a kill attempt during a state quarterfinal. He helped the Trevians go 35-5 this past spring. PHOTOGRAPHY BY JOEL LERNER

As soon as he heard his name announced as a starter for New Trier before the start of the 2016 boys volleyball state championship match in Hoffman Estates, Jack Werd wanted time to freeze.

That would have made it so much easier for the middle blocker — a junior and first-year varsity member at the time — to look around and fully appreciate everything about the scene: the packed stands; the encouraging messages on poster boards held by New Trier fans in the stands; and the human tunnel formed by New Trier’s reserves, through which Werd would enter before greeting his team’s other starters, along with Trevians coach Sue Ellen Haak, near midcourt.

“As I got up off our bench at the end of the players’ introductions, I remember thinking, ‘I made it,’ ” recalls the 6-foot-6, 200-pound Werd, who helped that ’16 squad (36-6) take state runner-up honors to Glenbard West (42-0) and served as a senior starter for the Trevians’ state quarterfinalist (35-5) this past spring.

Werd had the right to bask in that special moment more than a year ago.

The same Jack Werd was a team manager for New Trier’s 2015 JV boys volleyball team — the unit he had hoped to make as a sophomore in tryouts. Werd got cut, but Haak offered the manager position to the former middle school basketball/football/baseball player who played volleyball for NT’s freshman ‘B’ team in 2014.

“My first day, as a JV manager, I shagged volleyballs, put them on carts and pumped up deflated volleyballs,” Werd says. “It got to the point where I thought, ‘What’s the point of this? There’s a chance I’ll never get to play in another volleyball game.’ My mom [Margaret] was happy because being a manager meant I wouldn’t sit around at home from 3-6 [p.m.] every day.

“But I stuck with it and had a pretty good time that season. I sat during the games and cheered. Our JV team was great that season — undefeated.”

The next spring he showed up for tryouts as a junior and made the JV. Nearly two weeks in, Haak allowed Werd — a Vortex club volleyball player for two seasons — to experience varsity action in a match against Waukegan. He sat for the first set and notched his first varsity point in the second set of the NT victory.

Haak, to Werd, after the debut: “Want to be a permanent member of the varsity?”

Werd established himself as a dedicated, reliable middle blocker for the rest of the regular season and started that final match on the final day of the state tournament.

Werd’s inspiring journey — from inflating volleyballs in JV practices to deflating the spirits of varsity opponents with his resounding blocks — allowed Haak and Werd’s teammates to recount it for disillusioned or downtrodden spikers.

“I loved giving speeches to the young guys in our program and telling them about what Jack went through to become a big part of our team,” says 6-8 outside hitter Billy Fauntleroy, a 2017 New Trier graduate and the Trevians’ leader in kills (292) this past spring. “When we looked at Jack, we saw a guy with perseverance, a guy who thought positively and proved anything is possible with hard work.

“Jack,” the University of Southern California-bound student athlete adds, “is one of the best middle blockers I’ve ever seen. He reaches so high on hits, so high on blocks — important qualities you want from a middle. And I’ve never seen him angry on a court. Frustrated, yes, but never angry. There was a nice, calming presence about him, and he was always smiling, always in a good mood.”

In between his junior and senior seasons at New Trier, Werd joined Adversity, a Vernon Hills-based volleyball club. Adversity veterans Fauntleroy and Niko Gjaja (a setter and another 2017 New Trier graduate) put in a good word for Werd to their club coaches. One of the club’s coaches, Kyle Masterson, starred at Barrington High School as a middle and played for an NCAA men’s volleyball championship team at Penn State University.

“One of the best things that ever happened to me in my volleyball career was the opportunity to train and compete with some unreal players at Adversity,” says Werd, one of five 2017 NT graduates (with Fauntleroy, Gjaja, Kieran Hutchison and William Wolf) who will battle for Adversity’s Purple U18 team at the Boys Volleyball Junior National Championships in Columbus, Ohio, July 1-4.

“Billy and Niko had faith in me and never stopped encouraging me, and with Kyle I gained a ton of weight and knowledge under his direction. Players lifted three, four times a week, and Kyle helped me improve my footwork, my blocking technique, my thinking as a middle … everything.”

Werd will be forever thankful for Haak, too, the coach who saw plenty of promise in a raw middle blocker and kept him from finding another spring outlet by offering him a JV manager duties more than two years ago.

“Jack,” Haak says, “kept plugging away, kept going. His attitude of never giving up, of being resilient, of always wanting to be in a stressful situation in a game, was a part of his phenomenal story at New Trier.

“What an awesome young man,” she adds.

The young man will head south for his next stop — Texas Christian University in Fort Worth, where he’ll major in pre-business with a concentration in either finance or marketing. Look for him to find time for club volleyball or intramural volleyball.

“There are some sweet beaches down there,” Werd says.

Fauntleroy, for one, will miss Werd. He’ll also miss the times they spent sitting across from each other on bus rides after road matches.

“We’d try to make each other laugh, after a big win or after a tough loss,” Fauntleroy recalls. “We’d do that by making faces at each other or by doing other things.

“It was a little thing, I know, but for me it was also a memorable thing.”