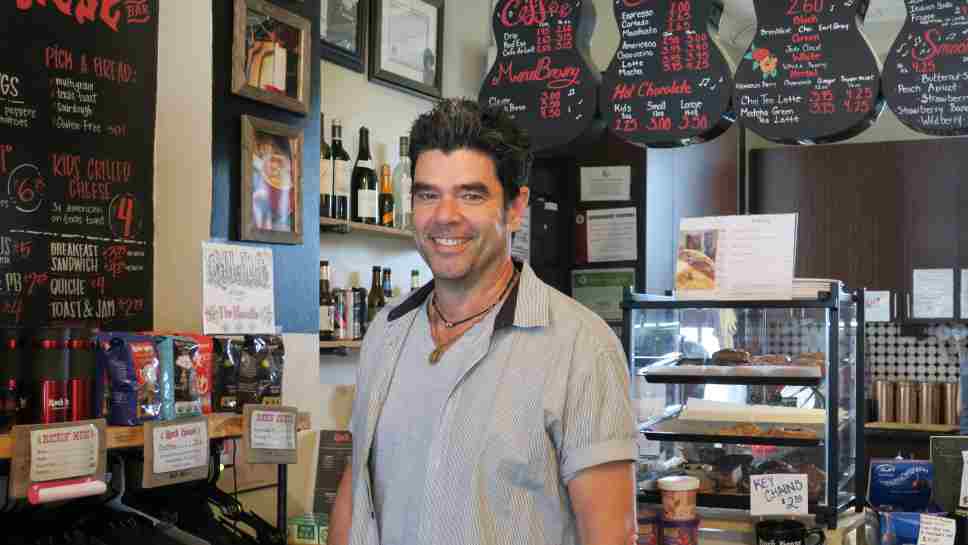 Chris Karabas, owner of The Rock House in Wilmette.

WILMETTE – Before the Wilmette Village Board voted to opt out of the Cook County minimum wage and paid sick leave ordinances on June 27, many residents and small business owners shared their opinions for and against the regulations.

Chris Karabas, owner of The Rock House in downtown Wilmette and Glenview, was among those who spoke at the meeting to share his insights as a business owner. But he found that the allotted three minutes for public comment did not provide enough time to fully outline his opinions, so he reached out to DailyNorthShore to further explain his point of view.

Here is a summary of the interview:

Karabas said he has always paid well above the minimum wage both in the cafe as well as at the music school portion of the business. “The Rock House has proudly, voluntarily, and very generously exceeded the minimum wage from the day we opened,” Karabas said.

Raising the minimum wage wouldn’t put The Rock House out of business, but it would hinder his flexibility to reward the most talented employees, Karabas said, adding that it also could have the unintended result of creating a revolving door of mediocre talent.

Nothing is more valuable to a small-business owner than reliable employees, according to Karabas. While he supports higher wages, Karabas said he is sympathetic to other small-businesses owners who are struggling to compete with the internet and large companies.

The paid sick leave is a different story. Karabas said he did the math and concluded that it would force The Rock House to shutter. “I wish we could afford it, but truly we can’t at this time,” he said. As an example, he said that if his 20 music teachers were to take a week of paid sick leave he would lose 20 weeks of revenue, plus they would have to pay for the sick days.

Some customers may not understand how The Rock House business works. While many residents only visit the cafe, it is actually the music school that keeps the business afloat. The cafe is essentially a loss leader that was created for the enjoyment of parents dropping of their kids for lessons, Karabas said.

Understanding why Karabas started The Rock House helps illuminate his views on small businesses and the Cook County ordinances. The Rock House was opened in the depths of the recession by Karabas and his business partner Robert Mueller. In addition to The Rock House, Mueller and Karabas run an agency representing film directors, and they also perform in a band together.

When a neighbor’s child kept stopping by for guitar lessons, Karabas was inspired to start a music school that taught kids how to play music and kept them engaged. At The Rock House students are taught how to pluck out a favorite song on an instrument, before they learn how to read music. “Teach them how to get the instrument to talk first,” is how Karabas described their philosophy, similar to how children learn to speak before they learn to read.

Essentially, The Rock House was born from a pure love of music and a desire to share that love with the community where Karabas and his wife are raising their three children.

“Music drives everything we do,” Karabas said.

Likewise, the focus has always been on community engagement, rather than making money.

While The Rock House has evolved over time and now is holds its own financially, Karabas said he’d probably be better off without it. However, that would miss the point of why he started The Rock House in the first place.