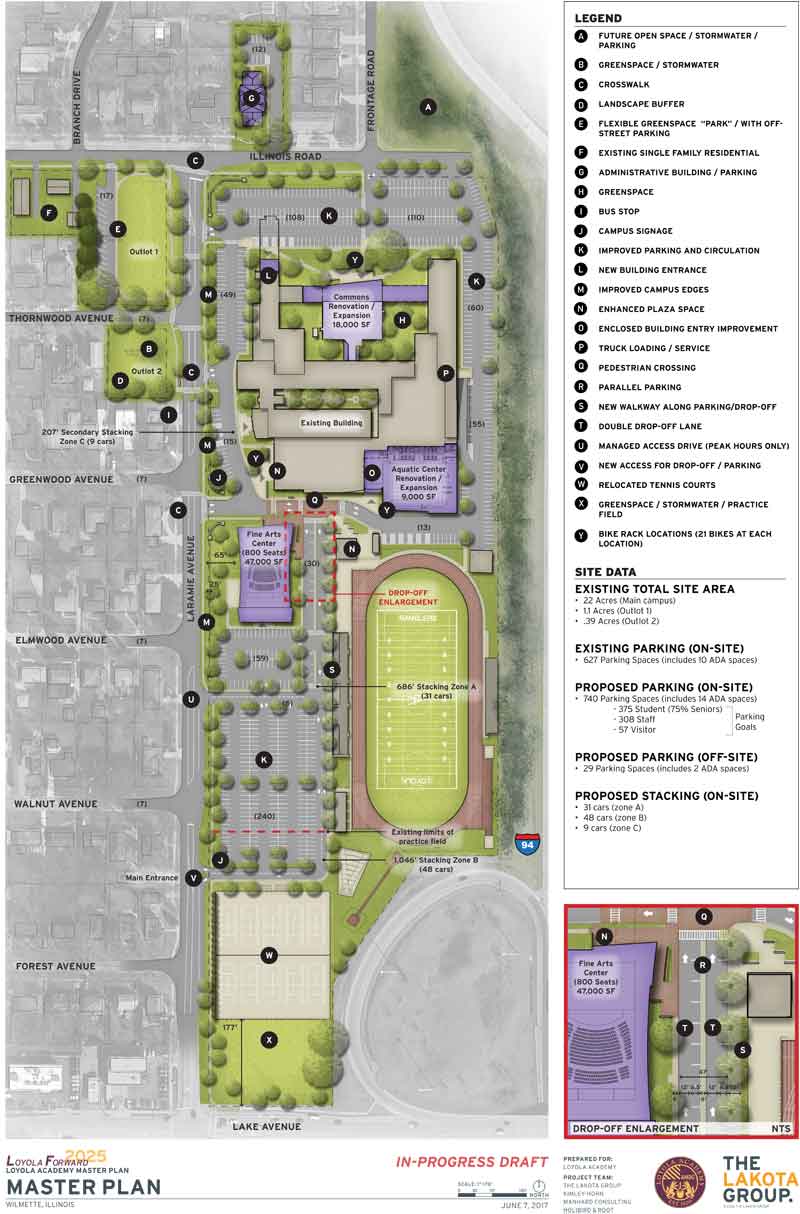 WILMETTE – Loyola Academy announced plans to launch a multi-phase construction project to revitalize its west Wilmette campus over the course of several years. Enhancements include a new aquatic center, additional and realigned parking, a student commons and resource center, administrative offices and the construction of a 700-seat theater for the performing arts. In line with Loyola’s commitment to sustainability, the plan also prioritizes the retention of green space west of Laramie Avenue and calls for the creation of energy-efficient learning spaces.

“This is a transformative moment for Loyola Academy,” said the Rev. Patrick E. McGrath, SJ, the school’s president. “This building project is a part of our strategic plan and represents the next step in bringing our vision for the future of Loyola to fruition. It’s a tremendous opportunity that will be looked upon as a milestone in the history of Loyola Academy.”

Working with The Lakota Group, a Chicago-based urban planning firm; the school’s campus master planning committee; other members of the Loyola community; the management of the Village of Wilmette; and local residents, Loyola has developed a plan that will serve its students and support its mission, while respecting the surrounding community that the school has called home for 60 years.

“We are eager to move forward with these exciting enhancements,” said Father McGrath. “Our Jesuit mission demands that we always seek to make a more creative and generous response to God’s invitation. Our revitalized campus will enable us to form future generations of Ramblers in the transformative experience of Jesuit education.”

Loyola Academy will celebrate its 60th year in Wilmette in September 2017. The Jesuit college preparatory school serves approximately 2,000 students annually. During the 2016–17 academic year, students traveled to Loyola from 89 different urban and suburban zip codes. Twenty-three percent of the student population received $3.8 million in need-based financial aid. More than 98 percent of the 510 graduates in Loyola’s Class of 2017 will be attending four-year colleges and universities in the fall. Currently, there are more than 24,000 Loyola Academy alumni worldwide.

Loyola will be presenting its campus master plan and seeking approval for its phase one enhancements from the Village of Wilmette Zoning Board of Appeals in September 2017. Groundbreaking is slated for Spring 2018.

For more information about Loyola Academy and its campus master plan, visit www.goramblers.org/page/loyola-forward-2025.

Submitted by About Loyola Academy
Loyola Academy is a Catholic, Jesuit college preparatory school established in 1909 with a mission to form women and men for meaningful lives of leadership and service in imitation of Jesus Christ. Loyola is committed to the development of the whole person, with a curriculum that thoughtfully and intentionally integrates the academic, spiritual, emotional and physical development of its students with the experience of service to others.