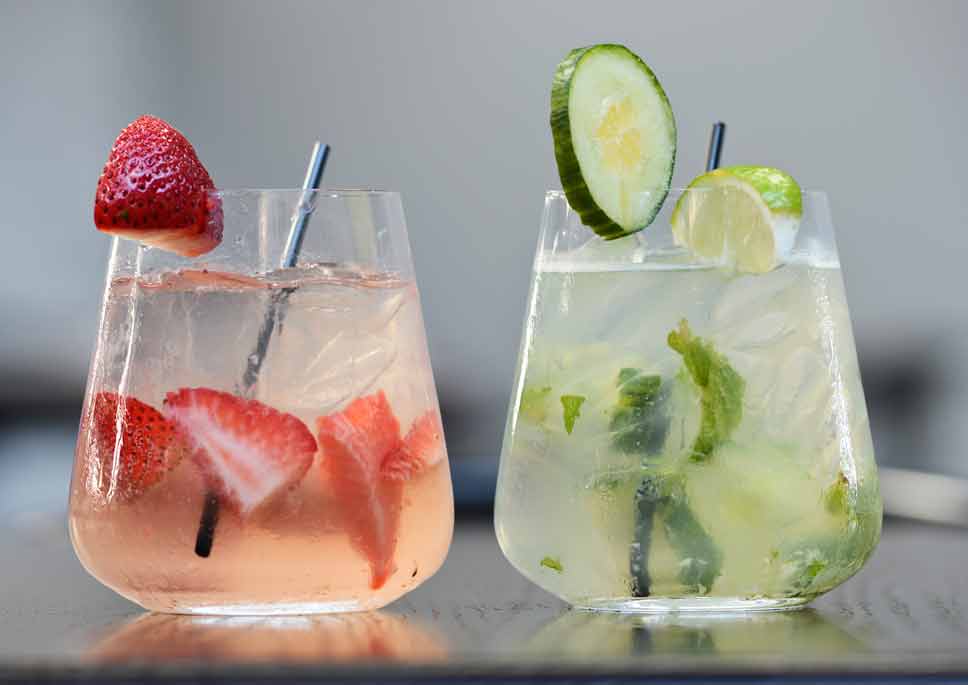 Cocktail time at Lucky Fish in Northbrook includes the Nola Summer Breeze with strawberries and the Caviar Maid garnished with cucumber. PHOTOGRAPHY BY GEORGE PFOERTNER/JWC MEDIA

After decades spent owning and operating a local chain of successful cafes and delicatessens all over the North Shore, the family behind the immensely popular Once Upon a Bagel enterprise has launched a bold and beautiful new destination restaurant in downtown Northbrook.

After a four-year successful run with their small Lucky Fish Deli concept on Sheridan Road in Highwood – a casual café tucked discretely behind their popular hot dog joint, The Mean Weiner – owners Shana and Steve Geffen were ready to bring a larger, more elegant version of Lucky Fish to their hometown of Northbrook.

The restaurant’s fish and seafood menu was inspired during a trip taken by the Geffen Family patriarch and Once Upon a Bagel founder, Gerry, to some of the popular summer vacation communities dotting Cape Cod and the coast of Maine.

“My father loved the idea of going into a lobster shack and ordering a fresh lobster roll or shrimp,” said Steve. “He knew there was nothing like that around here, so we opened our version of a little lobster shack up in Highwood. It took off from day one.”

The success of Lucky Fish Highwood convinced Shana to look for a larger location closer to the home she and Steve share with their two busy sons. Luckily, Shana was able to see past 62-years worth of dust and oil that covered the empty old Shermer Road auto parts warehouse she stumbled upon.

“With an existing drop ceiling and dividing wall you could not see the beauty of this space,” said Shana. “When we pulled it all away we discovered a 40-foot long skylight and amazing bow truss ceiling no one ever saw.”

After months of extensive renovations during which Shana personally selected every tile, light fixture, plate and piece of silverware that now grace the restaurant, the Geffens unveiled the finished product at Lucky Fish’s formal opening on May 27: a stunning dining room with dramatic, 20-foot ceilings and industrial-style exposed brick, pipes and ductwork that pay tribute to the building’s history. Architectural ironwork left over from the former auto body shop adorns the walls alongside artistic black and white photos of the interior’s 18-month restoration.

Lucky Fish’s experienced Highwood chef, Jesus Castaneda, has relocated to the new location in Northbrook, bringing with him a menu he claims is perfect, but still allows room for the seasonal specialties and fresh “secret” ingredients he says his regular customers know to inquire about.

“I’ve prepared special dishes made with shark and scorpion fish,” said Castaneda, who strives to incorporate whatever the day’s catch may bring. “Right now we’re seeing the best of the Maine lobster season. In the early fall we’ll have crawfish from Louisiana and the season’s tastiest oysters.”

Lucky Fish’s gazpacho soup, served with six meaty pieces of shrimp, has become a summer favorite, as is the restaurant’s famous Key Lime Pie – highly regarded by fans as the perfect blend of tart and sweet.

The 150-seat restaurant opened just four weeks ago, but was already packed at 5:30 p.m. on a Thursday, with an early seating of diners ranging from retirees to young families with small children. Later in the evening, Shana and Steve say the crowd transitions into couples and lively groups of friends.

Open daily from 11 a.m. for lunch and dinner, Lucky Fish does not take reservations, but it will accommodate an advance booking of 10 people or more. Without a dedicated parking lot, the restaurant offers valet parking for dinner customers but also benefits from nearby municipal parking and its central, village location.

‘We’re finding that a lot of our customers live here in the neighborhood and walk to the restaurant,” said Shana.

Shana also has big plans to transform the large outdoor patio space she created out of auxiliary warehouse storage in the rear of the restaurant. Her vision includes a future outdoor bar and large three-sided fireplace.

“Our plan is to grow into it,” said Shana, who also hopes to expand the restaurant’s offerings to include weekend brunch service.

Decorating the wall of Lucky Fish’s smaller, more subdued back dining room is a large wooden map inscribed with the words ‘The World is Yours.” Shana had the wall hanging made for husband Steve in the frenetic weeks leading up to the restaurant’s opening.

“This is a new adventure we’re starting,” she said. “It really sums up where we are right now.” 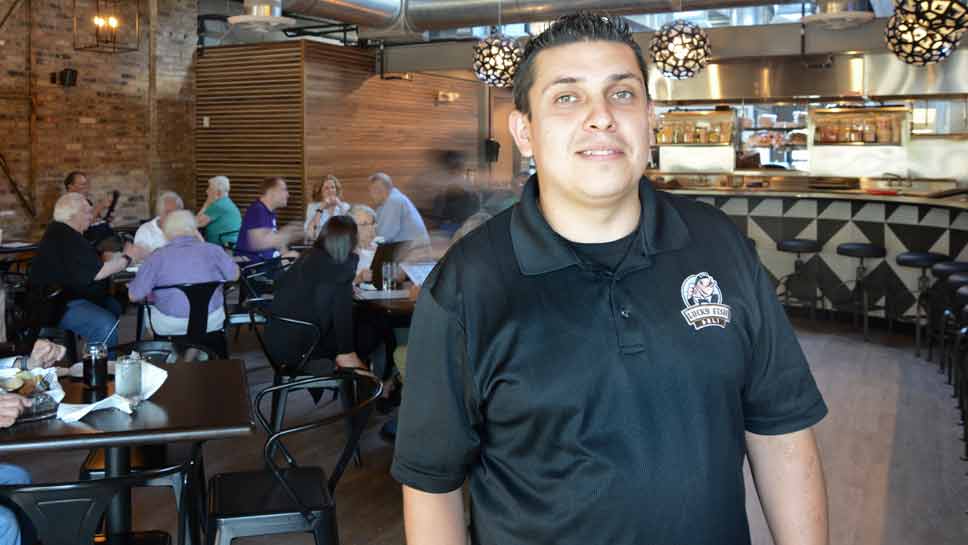 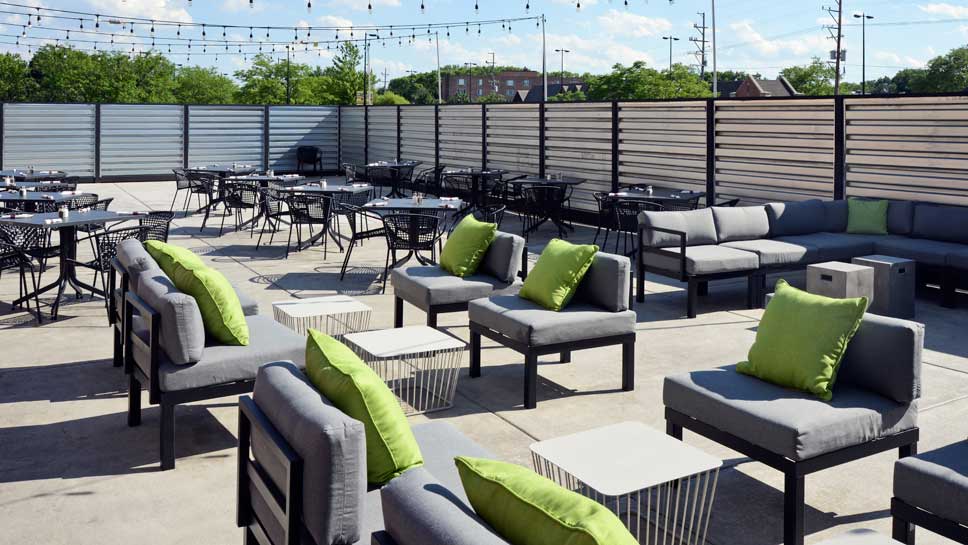 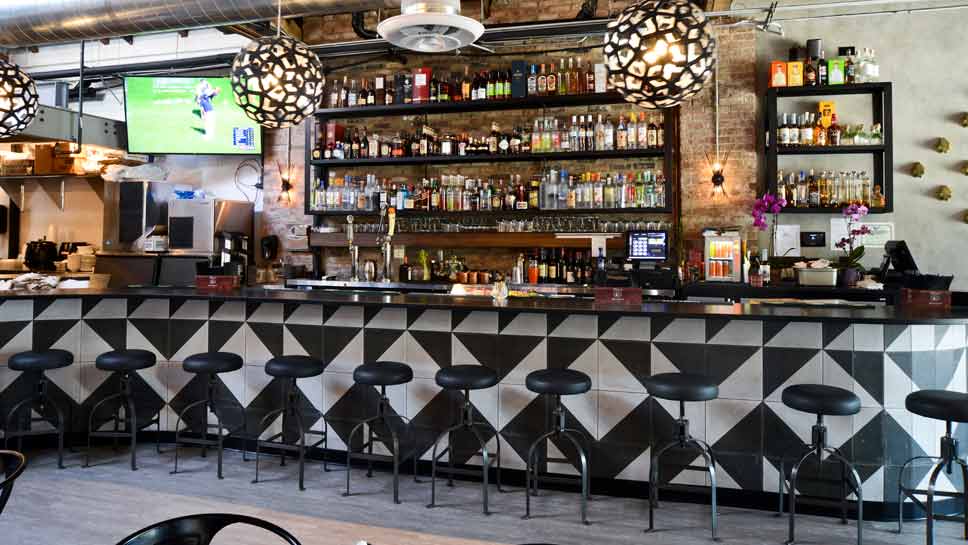 Indoor bar area is stocked and ready for cocktail hour — or any hour.