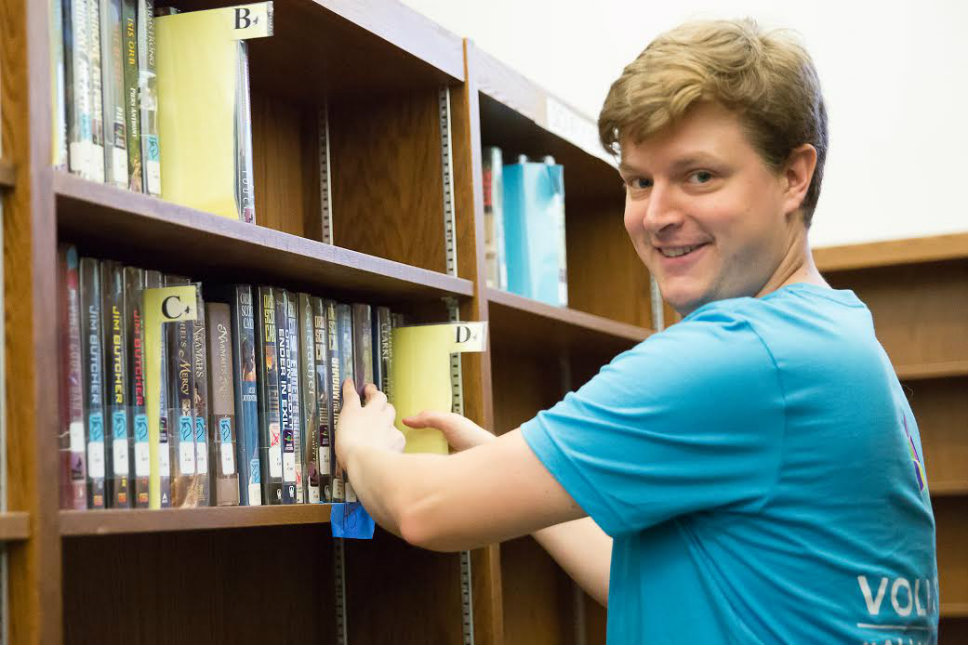 Trace Bauer of Lake Bluff is one of the AbbVie employees who helped with the renovation of the North Chicago Public Library. Photo courtesy of North Chicago Community High School.

Keya Milla of Highland Park believes her children’s future depends both on the education they will receive in North Shore School District 112 but also on the schooling youngsters in North Chicago obtain.

Tanya Jeong, a Wilmette native whose children attend the same Ramona Elementary School she did as a youngster holds a similar view.

Milla and Jeong are two of 209 North Shore residents working for North Chicago-based AbbVie who were among the company’s 6,000 volunteers on five continents participating in the company’s Week of Possibilities June 26 to 30. The effort is designed to enable AbbVie employees help the towns where they work.

AbbVie is a multinational biopharmaceutical company finding solutions to treat diseases from life threatening illnesses to chronic conditions, according to the company website.

Milla, a brand attorney for AbbVie, is thankful for the education her children will get in Highland Park, but she said helping the schools in North Chicago will benefit her youngsters as well. The state took control of District 187 more than five years ago, appointing a chief executive officer and a board.

“I am doing this because it will have a huge impact on my children,” said Milla. “They are all the future and they are going to be their peers.”

Library Will Have Recording Studio

Jong, a manager of employee and community engagement, spent part of her time at the library creating a place for middle and high school students to hang out – including a recording studio. She sees it as a place for children to expand their creativity.

“It’s for teens and tweens,” said Jeong. “The kids in North Chicago deserve all the opportunities my children have. This is why I do it.”

Helping AbbVie to put the week together was Jennifer Grumhaus of Lake Forest. She is the co-founder and executive director of North Chicago Community Partners, which helps schools and other groups in town which are underfunded. She works with AbbVie on a regular basis.

“Hundreds of their employees keep helping in the community,” said Grumhaus. They tutor and mentor. This week is just a treasure because they are getting so much done. It’s pretty exciting.”

Volunteering has been second nature of Trace Bauer of Lake Bluff for as long as he can remember. A financial and operational analyst in AbbVie’s government affairs division, Bauer graduated  from Lake Forest High School in 2009 and has spent his entire life in Lake Bluff except for his four years in college at Georgia Tech University.

Bauer spent much of June 27 unpacking boxes of books at the library and putting them on shelves after other volunteers did the renovation work. He said his only connection to North Chicago before going to work for AbbVie was competing against the Warhawks in track. Now he sees something different.

“I’m an Eagle Scout. It’s part of who I am,” said Bauer. “They’re just down the road but they’re very far away. I want to be a good neighbor and help.”

Bauer said he hopes the music studio and other aspects of the renovated library will be a motivational factor in the lives of the young people of North Chicago.

“If you see nice things, you’re going to want to be a part of it,” said Bauer.

Along with the work she did during the week at the library, Jeong and others at AbbVie volunteer their time to help students in North Chicago with STEM (science, technology, engineering and math) education.

“We feel it’s important for kids to get a good science education,” said Jeong.

Milla said she felt particularly good about the work she did on the playground because it was partially designed by the school’s students. Though she helped lay the foundation, she said she was excited for the youngsters when they see the completed area.

“They drew it with crayons and will get to see the finished product,” said Milla. 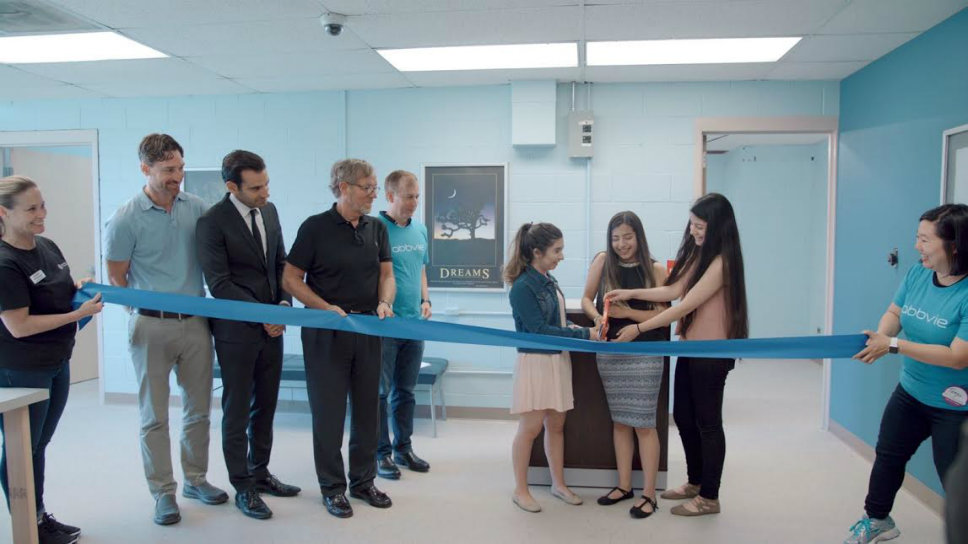 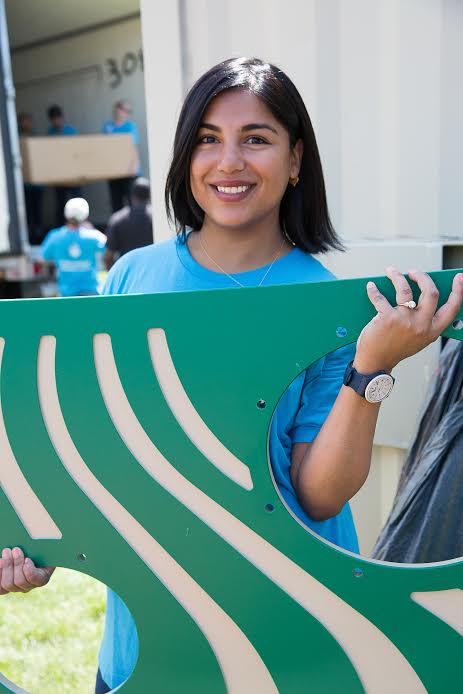 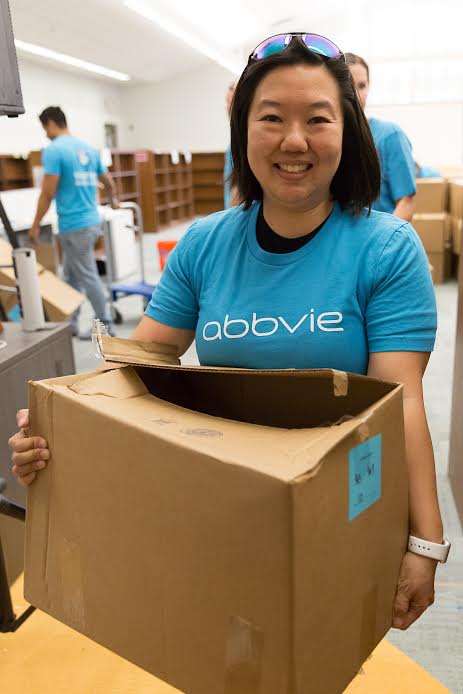 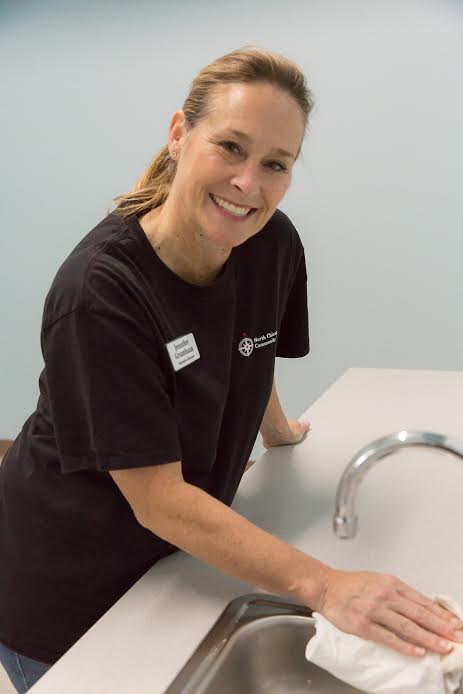