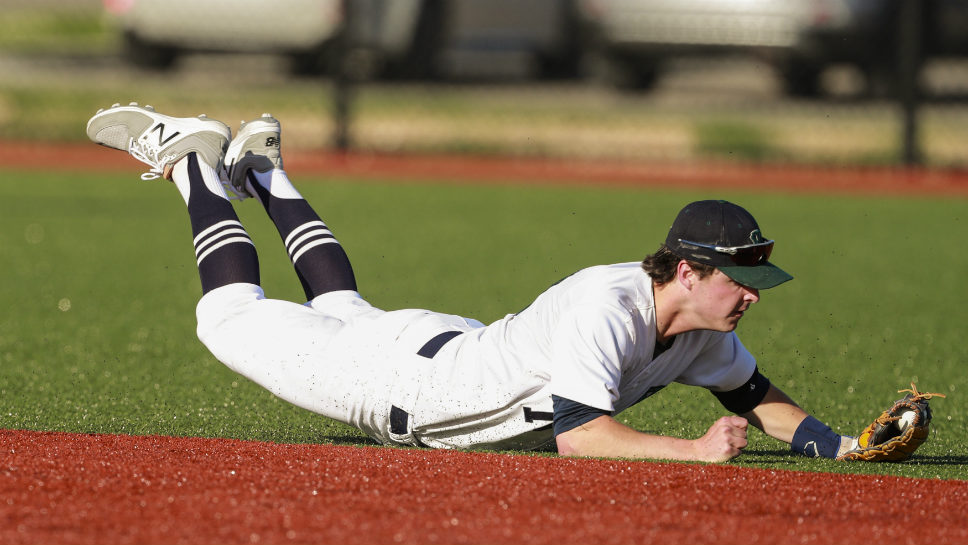 Usually, Kevin Donahue was the one committing highway robbery.

Usually, he was the one making the spectacular play at shortstop, robbing a base hit and ruining the mood of an opposing player.

On a daily basis, Will McNulty, a second baseman for the Trevians, saw The Kevin Donahue Defensive Show up close and personal and in living color.

“He pretty much made every play, even the tough ones, look routine,” praised McNulty.

So turnabout is fair play, right?

In the third inning of the Class 4A state semifinal, a 9-3 loss to Crystal Lake South, at Silver Cross Field in Joliet on June 9, Donahue was the victim of baseball theft.

After smashing a ground ball down the third-base line, Donahue put his head down and dashed to the first-base bag. Coming out of the box, he was convinced that the ball was heading into the left-field corner.

“I’ve hit the ball like that and right there 10 times this year — and nine of them went for doubles,” Donahue said.

Thus, just before he got to the bag, Donahue flipped on the turn signal in his head. He circled the bag a little prematurely and started to take a left turn.

What he didn’t figure on was CLS’s Brian Fuentes making the play of the day — and just maybe the play of the tournament. The Venezuelan-born, all-state third baseman could not have played it any more perfectly.

“I might look calm out there, and I try to play that way, but things get to me,” Donahue said.

“I can’t change it now. But that was frustrating,” Donahue said. “I went into the dugout — and didn’t come out for a while. I had to calm myself down. I had to take a deep breath.

“You can’t go out to the field in an emotional rage,” he added.

For the most part, not a lot went wrong for Donahue this spring. Or for that matter, the past three seasons.

This spring, the 6-foot-2, 195-pounder batted .412 — 155 points better than last year — with 15 doubles and 21 RBIs. He earned all-CSL South accolades for the second time in his career and was just named to the Illinois High School Baseball Coaches Association (IHSBCA) Class 4A all-state team, along with teammate and starting pitcher Thomas Nugent.

Playing shortstop and hitting No. 3 in the batting order, Donahue arguably was the heart and soul of the Trevians, who won 30 games and took fourth in state.

“He was voted team MVP, picked by his peers,” said NT head coach Mike Napoleon. “Donny’s a guy who can carry a team on his back.”

He’s an even better teammate.

“A classy player,” said McNulty. “Smooth. It’s been great for me to team up with him.

“Kevin is one of those guys who leads by example,” McNulty added. “He’s played the game a long time. He always does the right thing on the ball field. You never see him flustered.”

You also don’t see him overplaying a great play. Donahue might celebrate on the inside — but he remains business-like cool on the outside.

Donahue, ranked as the 18th best senior shortstop in Illinois by the Prep Baseball Report, made a memorable full-extension diving stop in the sixth inning of the sectional semifinal at Kerry Wood Cubs Field in Chicago on May 31 to rob a hit from Evanston’s Jesse Heuer. It was … ESPN Top 10 Plays of the Day worthy.

In the second inning of the state third-place game against St. Laurence on June 10, Donahue took a hit away from Brian Lyle by making a diving stop up the middle and flipping the ball to McNulty at second.

Again. No reaction. He just dusted himself off and played on.

“I get excited,” Donahue admitted. “But I don’t like to show a lot of emotion. I’m not looking to pat myself on the back.

“You should go into a game with high expectations for yourself,” he added. “You don’t need to applaud yourself, if you make a good play.”

However, Donahue does bend that rule — on occasion.

“I do get excited when one of my teammates makes a great play,” he said.

His defensive attributes didn’t come automatically. He put the sweat in, and he received some great instruction along the way. He credits Napoleon, Dan Hopkins of the Highwood Braves and Nick Bridich of Loyola Academy.

“I grew up being coached by Hopkins,” said Donahue, a Northfield resident. “And I learned a lot, when I was at Loyola [he transferred to New Trier after one semester]. Bridich’s instruction was phenomenal. You can see why Loyola’s teams play such great defense.”

Then, there’s Napoleon, who has won 853 games in 32 high school seasons.

“Coach Napoleon is really big on having the proper footwork,” he added. “He’s got a saying, ‘There’s no such thing as a bad hop, only bad footwork.’ ”

Donahue’s hitting has never been an issue.

He was moved up to the varsity during his sophomore year and wound up being an all-league second baseman. Batting ninth in the order, he hit .329. His on-base percentage was .398. His OPS was .800.

“Hitting in the nine hole, I saw a lot of fastballs,” said Donahue.

His batting averaged (.257) dipped some during his junior season. But his other numbers were quite impressive: .336 on-base percentage, .415 slugging, 28 runs batted in, three home runs and seven doubles.

Donahue, who swung a yellow Easton, went into his senior year looking to drive in runs.

“That was my focus,” he said. “Coach Naps wanted me to be an RBI guy. I went into the season with that mindset.”

Donahue actually gave up a promising hockey career in order to concentrate on baseball. Thus, in the last couple of off-seasons, he spent a lot of time in the batting cages at Slammers in Lake Forest and at “some garage” on the North Shore.

“At Slammers, I had the 4 o’clock slot with Ed Tolzien,” he said. “Cooper Johnson [Ex-Carmel Catholic star catcher, who is now playing at Ole Miss] had the 5 o’clock slot.”

There were no such slots when Donahue and his NT teammates went to “The Garage” for impromptu hitting sessions.

“Kevin took the lead on getting guys to go there,” said NT senior catcher Dylan Horvitz.

“It was always open for us,” said Donahue. “Going there was good for player bonding. Good for team chemistry.”

The first order of business was the fun part: backing the cars — a silver Tesla and a black Mercedes SUV — out of the garage and into the driveway.

Donahue’s next order of business — before he heads to Indiana University in the fall to room with Horvitz and study business (both have been accepted into the Kelley School of Business) — is playing softball in a men’s league at AC Nielsen in Wilmette.

Due to a long run in the postseason, Donahue has not been able to contribute yet. He’s missed several games.

“We’re a young team, and it’s our first year in the league,” said Donahue. “We’ve been getting slaughtered.”

That could change soon. The ringers — Donahue, McNulty and Matt Kann (.337 batting average this spring) — have arrived.

New Trier shortstop Kevin Donahue makes a diving play to steal a hit from Evanston High School’s Jesse Heuer in a sectional semifinal. He has been named to the all-state team, long with NT pitcher Thomas Nugent. PHOTOGRAPHY BY JOEL LERNER 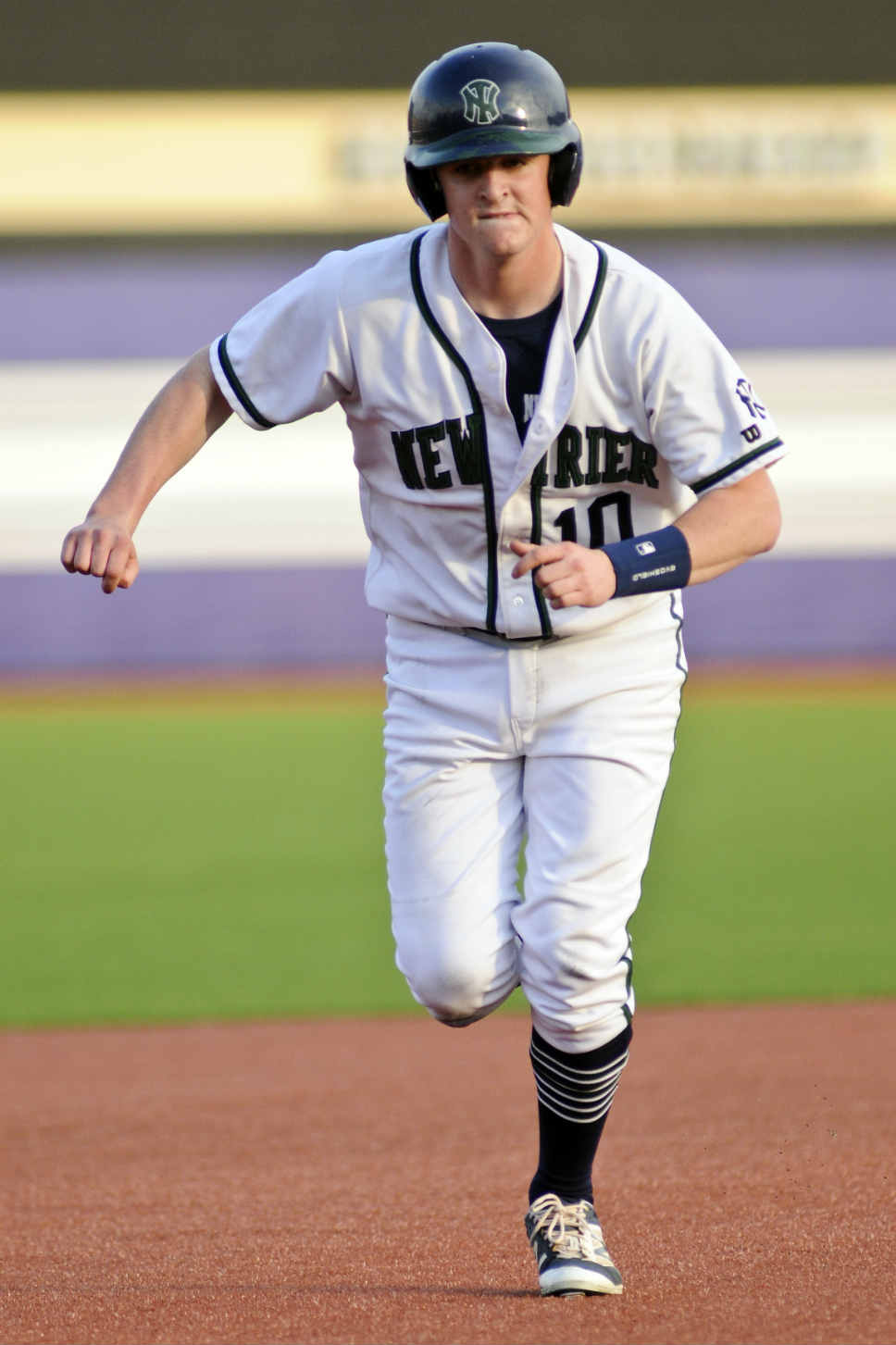