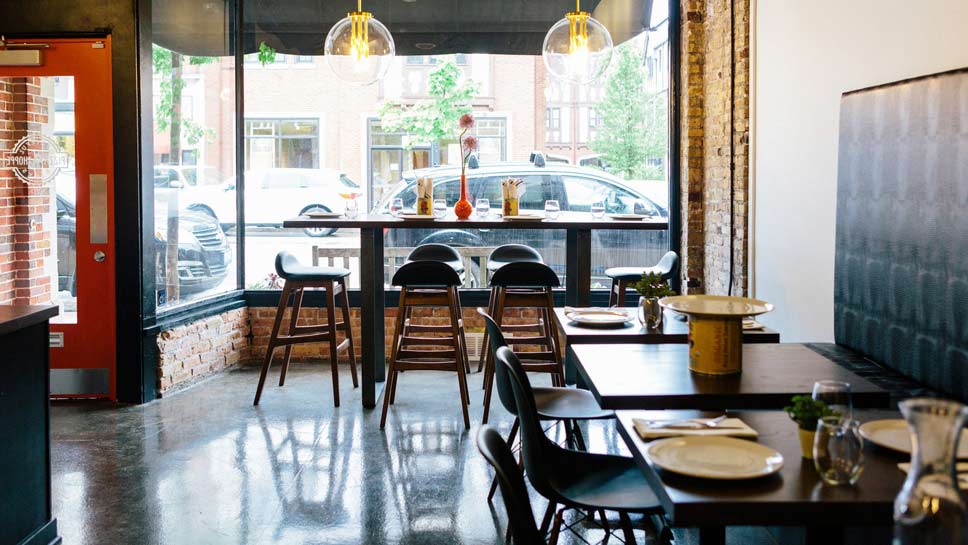 Pizza lovers might recognize Grateful Bites Pizza from the pies they cook on the spot in a portable wood-burning pizza oven at North Shore farmers markets. For those who love their pizza, and those looking to try it for the first time,  proprietors/husband and wife team Matt and Sarah Halack have just opened a new brick and mortar restaurant in Winnetka’s Hubbard Woods shopping district.

“The idea was when we started the mobile pizza oven that we would give it three years to develop a following (before opening a restaurant). The idea was to open with some customers built in already,” Matt told DailyNorthShore. The Halacks first started their business in 2012.

Their idea seems to have worked, since Grateful Bites already has many customers — both old-timers and newcomers. “I feel lucky because we have followers from the oven and people who are looking for new places here,” Sarah noted.

The Halacks had been looking for a location to open a restaurant on the North Shore, focusing on Winnetka because, they said, it’s ripe for new dining options. The location is also the perfect proximity to Kenilworth, the town where Sarah grew up and also where the couple is raising their five children.

White subway tiles adorn the restaurant’s walls, which has table seating in the front and a large wood burning stove in the back as the restaurant’s focal point. Large globe lights create soft lighting, while clever sayings decorate the walls throughout the restaurant, such as “the grass ain’t greener, the wine ain’t sweeter either side of the hill.” There also is an outdoor patio behind the restaurant where customers can dine in the warmer months.

Because the storefront was originally a women’s clothing store, the Halacks built everything out from the studs, including the kitchen. Sarah said they wanted the atmosphere to be both sophisticated and casual for families, relying on interior designer Leigh Dyer, of Leigh Dyer Design .

“People kind of feel like they are in the city a little bit, not in Winnetka,” she noted, adding that later in the evening groups of adults have been dining in the restaurant. 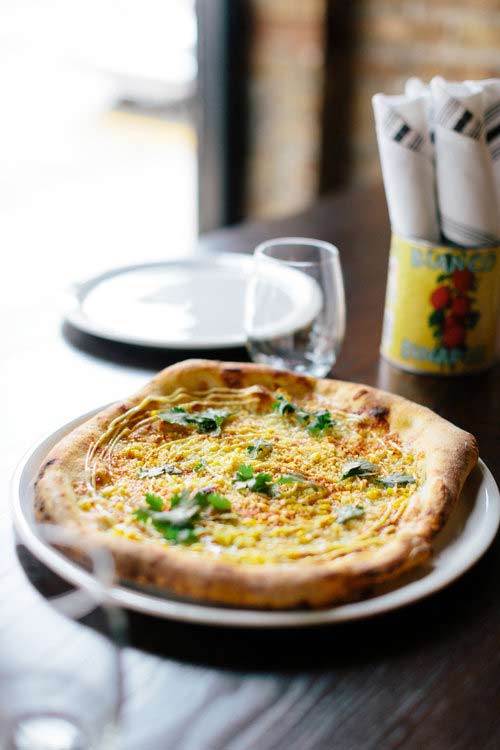 Grateful Bites Pizza is as local as local gets.

Matt oversees the cooking at the restaurant, their catering business, as well as the mobile pizza oven, which they still bring to the Highwood Evening Market. Before becoming a chef, Matt was a commodities trader in Chicago. He went to Kendall College for culinary school while still working in finance, eventually shifting gears to focus on his true passion full time.

The dough is made from organic flour milled from heirloom wheat from Utah. Matt uses a sourdough starter for the dough, which typically ferments for three to five days.

“You will taste some sour notes when you eat the pizza,” he said.

Everything is made from scratch, including the red sauce made from organic California tomatoes and the giardiniera for the sausage pizza. The cheese is sourced locally from Wisconsin.

All of the pizzas cook within minutes in the oven, which reaches 800 to 1,000 degrees. The format is fast-casual, with diners placing orders at the counter and waitstaff delivering food to the table.

Matt said the margherita pizza is the most popular, probably because people are most familiar with it. But the unique elote pizza, made with mozzarella and cotija cheese, mayo, roasted corn, cilantro and chili powder is also a crowd pleaser. The pepperoni and hot honey pizza is a sweet and savory dish, with honey steeped in habaneros peppers adding a sweet and spicy punch.

Diners can also choose from an assortment of wines, available by the glass or bottle, and beers from nearby breweries in Evanston and Glenview.

For now the Halacks are pleased with how well Grateful Bites is doing since opening two weeks ago, and they continue to seek a balance between working and caring for their family.

“I feel lucky that we are this busy but we are still trying to balance it all out,” Sarah said.