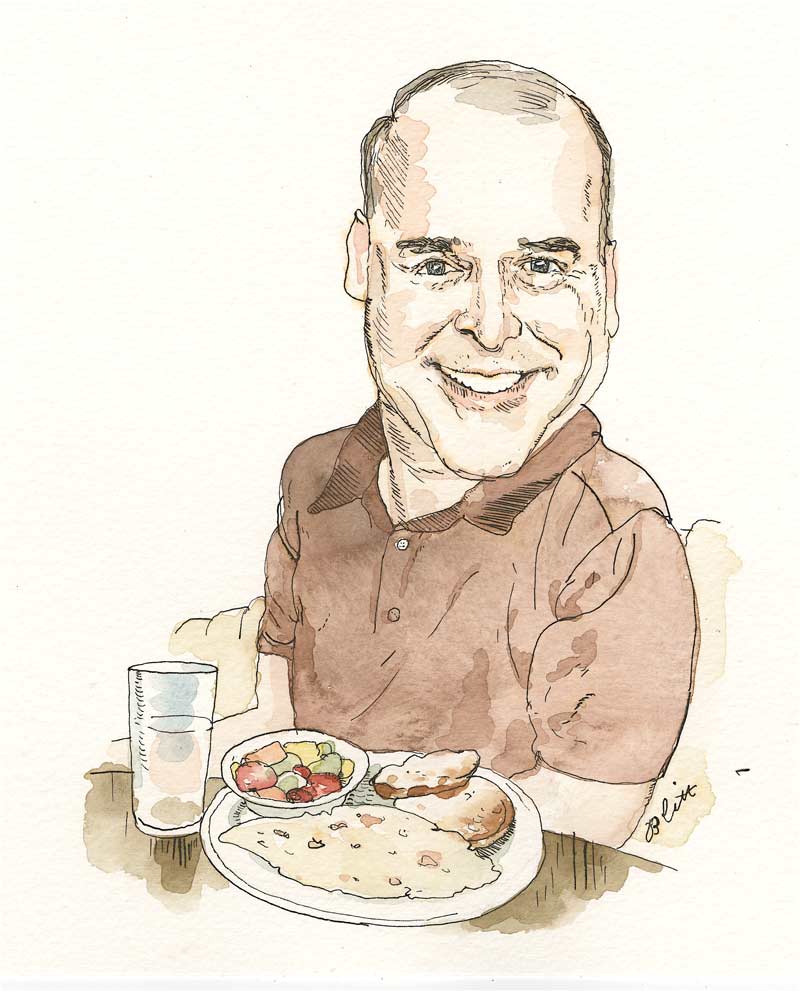 He pinch ran for Bo Jackson as a member of the Chicago White Sox in the early 1990s.

He was ordered to help a minor leaguer in the White Sox organization became a polished outfielder in the winter of 1993-94. The minor leaguer’s name and previous job: Michael Jordan, basketball superstar.

On October 15, 2016, he became a real-life Brady Bunch father — minus three sons, minus a maid named Alice — when he married Virginia “Gingi” Trux at U.S. Cellular Field.
Meet 53-year-old Michael Huff, a man with a bevy of exceptional conversation starters.

“The last three-and-a-half years in my life have been incredible,” says Huff, a 1981 New Trier East High School graduate and Glenview resident who has served as the Lisle- and La Grange-based Bulls/Sox Academy vice president of baseball/fastpitch since 2009.

“I’m in a healthy place in all aspects of my life.”

Today we’re sitting in a booth at Egg Harbor Café in Glenview. The former Wilmette resident orders an egg-white omelet with Swiss cheese and bacon to accompany a fruit cup and English muffin. The longtime, voracious sports fan in me wants to ask Huff about his fondest memories as a three-sport athlete (football, basketball and baseball) at New Trier East; about his days as a Northwestern University baseball teammate of current New York Yankees manager Joe Girardi; and about the details of his Major League Baseball debut (single to left-center, off Atlanta Braves lefty and future Hall of Famer Tom Glavine) as a Los Angeles Dodger in 1989.

But I’ll ask those later. Father’s Day is not too far away, and fatherhood happens to be one of Huff’s favorite topics.

“On Sunday nights, after our family meal, my first wife [Camille, who died in 2006] and I would watch classic movies and musicals with our young daughters [Taylor, now 28; Brianna, 25; and Sheridan, 23],” recalls Huff, who played for the Toronto Blue Jays’ organization in his final three MLB seasons (1994-96). “Classics like The Wizard of Oz, It’s a Wonderful Life, Casablanca, The Sound of Music. We’d watch Fred Astaire, Clark Gable, Humphrey Bogart … the greats. And then afterward we’d discuss each movie and what was going on in the world at the time that movie was made.

“My daughters tell me today that they’re thankful I made them watch those classics.”

Huff will be forever grateful his younger brother, Matthew, convinced him to attend his 30th high school reunion in 2011. Near the end of the night, Huff and a friend were conversing in a bar area when Huff noticed a woman standing behind his friend.

Yes, it was Virginia.

Gingi and Michael had dated at New Trier East. Michael was a junior at the time; Gingi was a freshman. Their first date: May 23, 1980.

“First love, for both of us,” Huff says.

Michael and Gingi got to know each other all over again after their reunion at Michael’s reunion. A courtship ensued, and the former outfielder threw Gingi a curve when he didn’t pop the question on their trip to Toronto.

“She thought for sure I’d ask her to marry me up there,” a smiling Huff says.

Huff stunned her with his proposal after a family dinner at one of their favorite restaurants — the Hackney’s on Harms Road in Glenview.

It was Day One of the Michael-Gingi marriage.

“The highs … there are many,” adds. “My marriage; being a father and being a grandfather [of Maya]; having the opportunities to play Major League Baseball for four organizations and to play baseball at Northwestern; and having strong relationships with all five of my daughters. So many highs. I’ve been fortunate.”

In 1996, following his retirement from professional baseball, Huff sent a resume to his closest friends and then set up dates for face-to-face meals at restaurants.

Michael Huff’s first lunch/meeting was with Chicago White Sox/Chicago Bulls owner Jerry Reinsdorf, the same man who had told Huff to work with Michael Jordan on the finer points of playing an outfield position.

Reinsdorf and Huff discussed a range of topics, including finance, real estate and Reinsdorf’s vision of Huff in either a managerial or front-office position in baseball. The two kept in touch for years thereafter before Reinsdorf chose Huff to streamline the Bulls/Sox Academy in 2009. In 2001 the academy opened the only year-round youth player development facility in the country owned and operated by a professional team. (Dozens of pro sports organizations have launched similar academies since then). It offers programs — for beginners and advanced players, boys and girls (ages 5-18) — in basketball, baseball and fastpitch softball.

“Jerry is always looking to give back,” Huff says. “One of the ways he does that is through the academy. We send staff members to venues, where camps are conducted. Little Leagues and park districts contact me all the time. We’re expecting thousands of kids to participate in our camps this summer.

“One of the rewarding things I get to do is work with kids on the lost arts of bunting and stealing bases.”

About Michael Huff, the toddler. He was born in Honolulu on August 11, 1963, the first son of Robert and Karen. Robert was a guitarist in a quartet at the time, performing with an immensely talented woman who moonlighted as one of Michael Huff’s babysitters.

Was Huff a handful all those years ago?