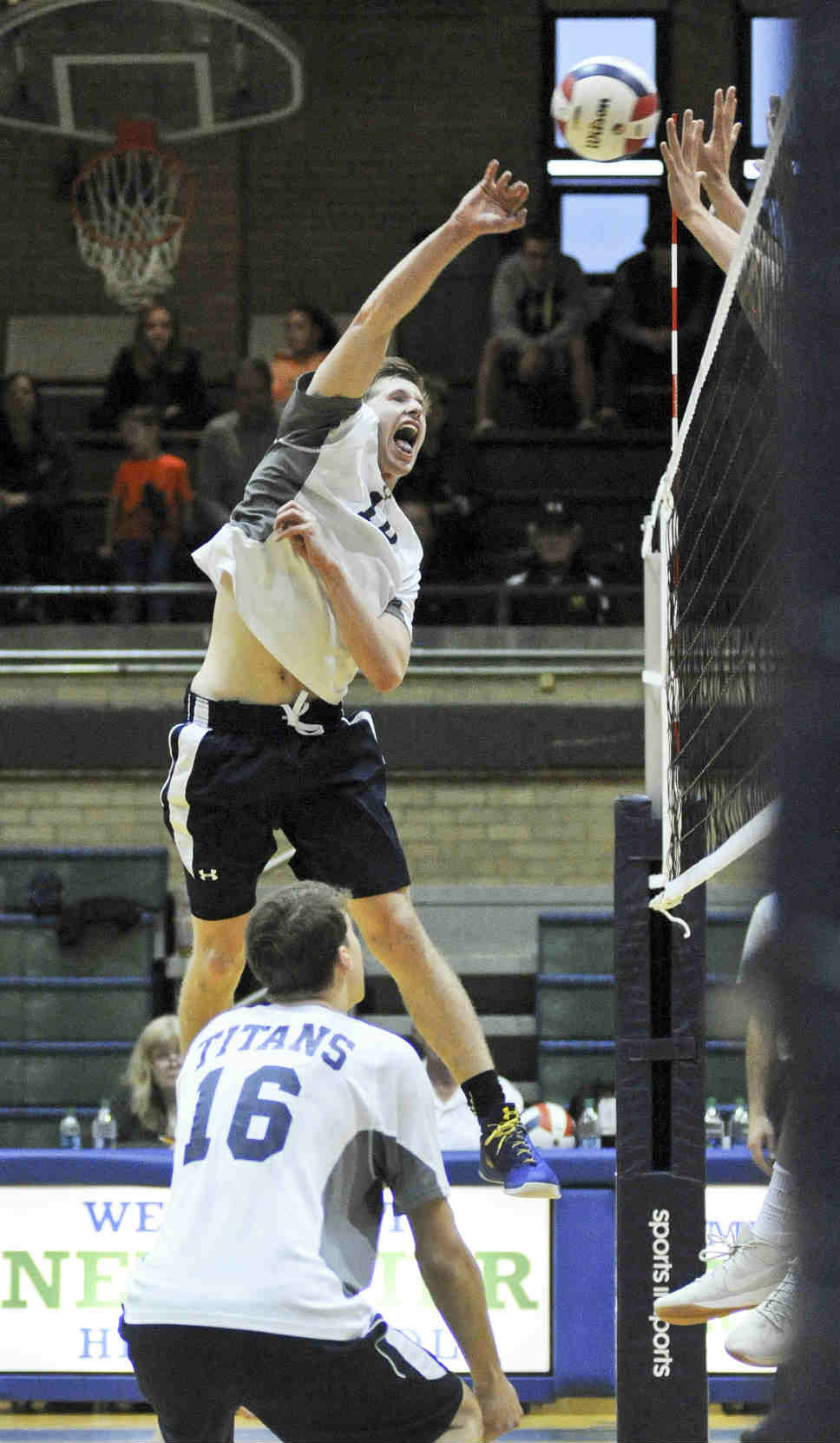 Glenbrook South’s Jack Sullivan goes all out during action against New Trier in a sectional semifinal last month. PHOTOGRAPHY BY GEORGE PFOERTNER

Days after playing in the final match of his competitive volleyball career last month, Glenbrook South senior outside hitter Jack Sullivan continued to search for a way to cope without volleyball in his life.

The former Titan had decided not to sign up for club volleyball this summer because he would not play it at a higher level as an industrial engineering/politics and philosophy double major at the University of Pittsburgh.

Sullivan was sorrowful and a bit forlorn at school on May 30 — four days removed from Glenbrook South’s tough-to-stomach 24-26, 27-25, 25-19 loss to host New Trier in a sectional semifinal.

The 6-foot-3, 170-pounder — a third-year varsity member and the 2017 Central Suburban League South Player of the Year — needed to talk, needed to be with a good listener.

Sullivan entered the office of his coach, Tim Monahan.

“Jack,” Monahan recalls, “sat down and told me, ‘Coach Monahan, I don’t know what to do now.’ For six years he had put so much of his energy into volleyball, and there he was, looking at me and wondering what he had to do to fill a sudden void in his life.

“Quintessential Jack Sullivan,” the coach adds. “I told him, ‘Jack, you know what to do. You’re smart, you’re a leader, you’ll move on and realize volleyball will be a part of you forever. From now on you’ll get to play it without pressure.’ ”

About a week after his visit to Monahan’s office, Sullivan arrived at a local field to play in a co-ed softball game. Many players in the league are 40-year-old mothers and fathers, Sullivan notes.

“Had I known months ago how I’d feel now, I might have looked into playing college volleyball at a Division III school,” says Sullivan, named Team MVP after the Titans’ 25-12 season this spring. “But you know what? I’m comfortable with my decision to go to Pitt and give club volleyball a try and sign up for intramurals. My talk with coach after the season helped a lot. Volleyball was a big part of Coach Monahan’s life in high school, and it’s still a part of his life as an adult.

“I’ll probably sign up for beach volleyball this summer.”

Sullivan had added 15 pounds to his frame by hitting the weights in the offseason, and last summer was his second with Division 1, a volleyball club based in Skokie. Sullivan — along with classmates Myles Engel, a libero, and Nick Cavallaro, an outside hitter — played on a D1 17U squad (Open Division) that placed in the top 15 at Nationals in Dallas. Sullivan began his club career with Lake Zurich-based Rolling Thunder as a seventh-grader and served and spiked for Deerfield-based Bounce during his freshman and sophomore years.

“Jack wasn’t the tallest, wasn’t the flashiest outside hitter, but he worked harder than others did and knew how to score points for us,” Monahan says. “He didn’t make a ton of mistakes. Coaches in our league said Jack stood out; their players couldn’t stop him from scoring points.”

Monahan, also a PE teacher at the school, never hesitates to pitch his volleyball program to tall freshmen each school year. Sullivan wasn’t super tall as a ninth-grader, checking in at 5-11. But Monahan approached him anyway.

The coach, it turned out, didn’t have to say a word.

“Jack said, ‘I know the season starts in March,’ ” Monahan recalls. “Then he asked, ‘When is the first team meeting?’ He couldn’t wait to play volleyball for Glenbrook South.

“It was a pleasure to have him on our teams.”

“Hugging that plaque was a fantastic feeling,” says Sullivan, whose father, Terry, was a high school forward/center in basketball, and whose mother, Carol, was a prep outside hitter.

“The sport of volleyball,” he adds, “instilled in me the value of hard work. It also helped me communicate better with teammates and with people outside of volleyball. Through volleyball I formed many meaningful relationships.”

Volleyball wasn’t his entire life for the past six years. The young man with the 34 ACT score and 4.4 grade-point average also somehow found the time to serve as a passionate commissioner of a fantasy football league. One of the pressing issues he faces this summer — while working as an intern for a process management company, Big Red Rooster Flow in Northfield — is getting the players in his league to select a doable draft date for all before he heads to Pitt.

“I love the NFL,” Sullivan says. “I listen to NFL podcasts every morning, and everybody I follow on Twitter is an NFL expert. Our league has a 10-page constitution, and you should see our spreadsheet — it’s incredibly complex.

“I even wrote my college [application] essay about fantasy football.”

But Pitt will get more than a volleyball lifer who knows everything there is to know about NFL running backs and wide receivers and why one veteran back has more upside than the wideout with the potential to lead the league in receptions.

The university will welcome a student with a knack for rising and nailing any kind of challenge.

“I have a feeling he’s going to give his all as an engineer, just like he did for our volleyball program,” Monahan says. “If I ask him to design something for me, he’d do it, and it would turn out great.”