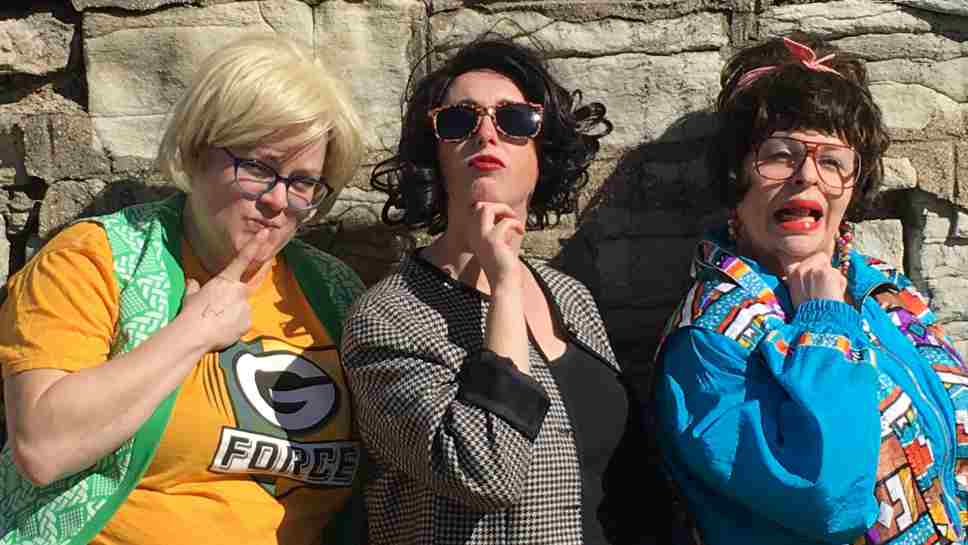 Alexandra Tsarpalas got her first taste of comedic writing as a student at New Trier High School when she wrote for Lagniappe-Potpourri, a variety show written and produced entirely by students. Now, the 35-year-old former Wilmette resident is an established comedian in Chicago, and she will perform twice during the four-day Women’s Funny Festival, which takes place June 15 – 18 in Chicago.

Tsarpalas is part of a growing movement of women entering comedy entertainment, a field that has historically been dominated by men. She has been performing at the Chicago Women’s Funny Festival since its inception in 2012, and regularly performs at The Laugh Factory and The Book Cellar, as well as various other comedy clubs and venues in Chicago.

DailyNorthShore spoke with Tsarpalas to learn more about the Chicago comedy scene.

DNS: Tell me a little bit about your background and how you got your start.

AT: I first started writing comedy as a student at New Trier High School for Lagniappe-Potpourri. In college I did some sketch writing but I mostly focused on film studies as a student. When I graduated from college, I decided to try improv because it was always something I was interested in doing. I took classes at Second City and The IO Theater. I did it for about three or four years but then I got burned out on improv because it’s a lot of people on stage. I decided to try stand-up instead.

I took an all-female class for stand-up comedy and then I started to do stand-up and some sketch comedy. Stand-up comedy is when you use written materials with jokes that have actual punch lines, versus sketch, which is more like a Saturday Night Live skit where you are in character. I generally do a hybrid of the two.

DNS: Is it hard to get gigs?

AT: There is a solid network in Chicago. Open mikes are helpful because you are seen by a lot of people. You make connections. It is hard to make the leap out of the Chicago market.

DNS: How did you first get interested in comedy?

AT: I’ve loved comedy since growing up in Wilmette. I would stay up late and watch David Letterman with my mom when I was five years old. When I was in college my mother took a class and tried stand-up. I come from a funny family – it is just in us.

DNS: How would you describe your style?

AT: Observational but also very quirky. I have a lot of unexpected bits. One of my best is prop comedy. It can get a bad name and it can be very weird but my bit has been popular. I have these porcelain hands I put in my sleeves and I have a lot of bits on it. I bought the hands in college when I was not doing stand-up as a joke, and now it’s a bit. People love it. People will walk up to me on the street and remember me for the porcelain hand jokes. It’s crazy but true.

DNS: When do you find you get the biggest laughs?

AT: That prop bit is one that people respond to the most. I have some jokes that are my standbys that do well. I have a lot of commuting stories and people relate to those. I also have a couple that catch people off guard. For example bits about the sayings inside Dove dark chocolate wrappers. I read the sayings in a dark voice and it catches people off guard.

DNS: How do you deal with failure?

AT: Everybody bombs – it’s universal. You won’t always know when it is going to happen. It isn’t as scary when it happens to you. After you do it for a while you realize some jokes hit well with some audiences and not with others. Sometimes the jokes need to be tweaked. You just bounce back. It is not as scary as you think it is.

DNS: Are there any comedians you find inspiring?

AT: My favorites are Amy Sedaris and Maria Bamford. Maria Bamford is a brilliant comic and over the years has gotten more personal. She is quirky and she goes into her mental illness and it is really good. She is absolutely brilliant and it gets better and better. She is also very supportive of other female comedians. She is very forthcoming with things like how much she gets paid and demanding fair pay.

Amy Sedaris is so weird and I love that so much. She does an amazing job with characters.

DNS: Do you think it is more difficult to be a female comedian?

AT: Overall yes, but that is changing a lot and part of that is not letting it stand in your way. There are a lot of boys clubs but women are building up around them. I am a cast member of the kates, which is an all-female comedy group. We have a comedy show that we put on at the Laugh Factory and The Book Cellar in Lincoln Square. The Book Cellar’s mission has been to make space for women to perform and for women who don’t perform all the time. It’s very supportive and exciting. A lot of guys want to be in the show now.

DNS: How do you come up with material?

AT: A lot of times things pop up in my head and I have to scribble them down. I also take time to write. You really have to push through and put thought into it. Some is observational or things that have happened to me.

DNS: Tell me about the Chicago Women’s Funny Festival.

AT: I’ve performed at it since its inception. It is so much fun. It is an insanely supportive, well run festival. One perk is that I get to see some of the other shows. I am such a nerd about it. I try to watch as much as I can. There is stand-up sketch and some comedic burlesque — really anything you can think of. There are four stages with shows running simultaneously.

The festival was created by Jill Valentine and Liz McArthur, who are both comedians. There are other festivals in Chicago but there was never one that was specifically for women in comedy. Every year there are more people participating. It was started to create a space for women and to showcase women in comedy in Chicago.

Tsarpalas will perform solo on June 16 at 10 p.m. and with the comedy group Mom Genes on June 18 at 6 p.m. at the 6th annual Chicago Women’s Funny Festival. The festival itself runs from June 15 – June 18 at Stage 773, 1225 W. Belmont, Chicago. For the full calendar, visit www.stage773.com/WomensFestCalendar.