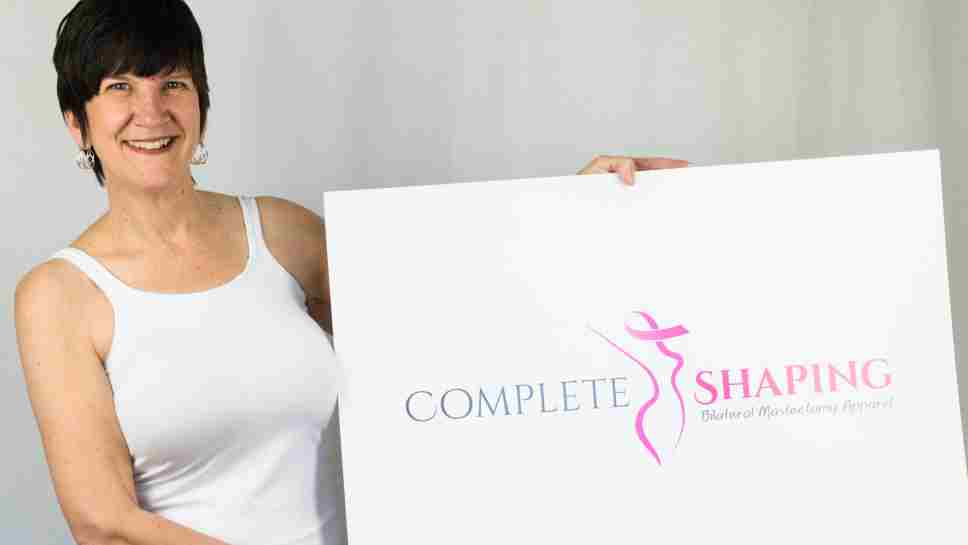 After Kathy Conway was diagnosed with breast cancer in 2009 and underwent a bilateral mastectomy, she tried wearing prosthetic shaping apparel but found them extremely uncomfortable.

The Wilmette resident tried every product on the market, but she couldn’t find anything that worked. “I’ve been living flat the last eight years,” Conway told DailyNorthShore, a phrase commonly used by breast cancer survivors who did not choose reconstruction and don’t wear a breast form most of the time.

Most of the mastectomy garments on the market are bras or camisoles with pockets to insert heavy silicone prosthetics, and they feature restrictive elastics, according to Conway. Because the garments tend to be one-size-fits-all, or both for women who have undergone bilateral or unilateral mastectomies, they can be uncomfortable.

For Conway, she found the elastics were irritating a scar that runs across her body. Like many women who have undergone bilateral mastectomy procedures, Conway can’t wear tight elastic bands because of an increased risk for lymphedema — a condition that causes increased swelling in the arm that can develop from wearing clothes with tight elastics.

But Conway wanted to have more options, so she starting testing ideas. She decided to design a prosthetic shaping garment that was lightweight, didn’t have elastics that squeezed or rubbed, and was made out of a soft, comfortable material.

Conway brought her ideas to her sister, who sews, and together they came up with a prosthetic shaping garment that worked specifically for women who have undergone bilateral mastectomies.

The design is a simple tank top that doesn’t need to be assembled before wearing. “I basically made it to put it on and go,” Conway said. There are no hard elastics, instead it’s made entirely out of soft fabric with the shaping built in. And it is very lightweight — only a couple of ounces — compared to the one pound silicon prosthetics typically used.

“I can wear (my design) for hours a day, whereas before I could only wear (prosthetic shaping) for about 20 minutes,” Conway said. The garment comes into different tank-top styles with adjustable straps in white, black or oatmeal, and it can be worn on its own or under clothing.

After hearing from friends and other women online who have suffered the same problems, she wanted to bring her product to market. “I know this could help a lot of other women,” she said. Conway brought her design to a garment manufacturing and design company in Chicago and founded the company Complete Shaping. She also has a pending patent on file with the United States Patent and Trademark Office.

Conway hopes to have the first run available for purchase by September and plans to launch her website at the same time. “It’s a smaller market but it is important. I am just letting other bilateral survivors know that they don’t have to endure discomfort to regain their natural form,” Conway said.