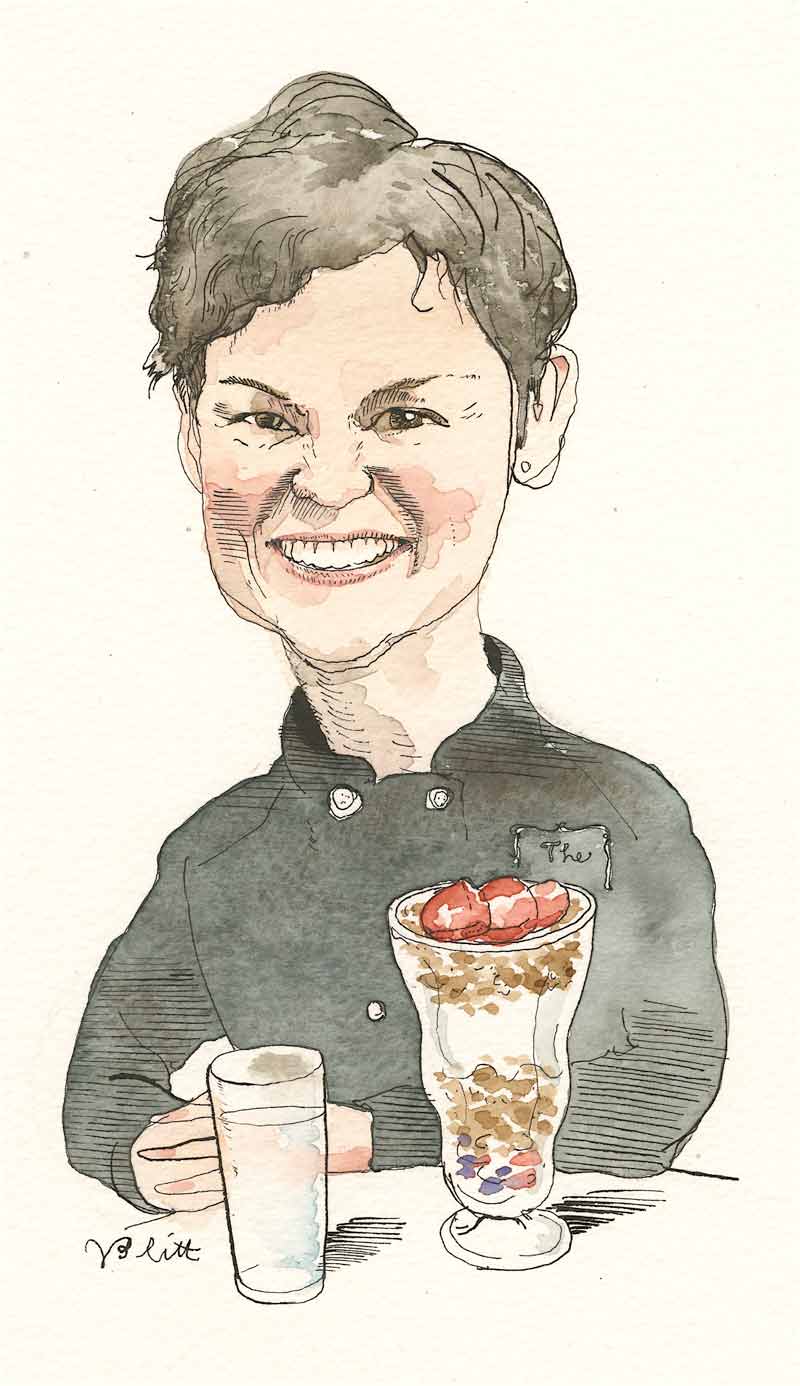 Emily Boling of The Floured Apron. Illustration by Barry Blitt

Emily Boling’s baking baptism took place in her grandmother’s kitchen in Missouri. She was 3, eager to get her hands “messy” with all kinds of sweet ingredients under the patient guidance of Grandma Eve.

How to knead, for sure.

“I always felt at home in my grandmother’s kitchen,” says Boling, a Winnetka resident. “Everybody goes through teenage angst. For me, that would go away as soon as I entered her kitchen. All was good when I was in there. All was right.

“My grandma watched Judge Judy all the time, and she was up on all the latest fashions. We’d talk and bake and laugh. And she had the most amazing aprons.”

Boling — the wife of David Oppenheim and the mother of daughters Maddie, 9, Ellie, 7, and Lillie, 6 — is none other than the founder and executive director of The Floured Apron, an organization formed two years ago to empower low-income women with the training, knowledge and mentoring they need to forge a new career path in the baking, restaurant and/or food service industry.

The Floured Apron students take classes for 10 weeks at Winnetka Congregational Church. Boling’s inaugural class numbered three brave women, with two graduating. One of the graduates recently informed Boling that she had found a church and has been teaching baking skills to young girls in the church’s kitchen. To date, more than 20 women — in a combined six classes — have graduated from The Floured Apron, and 92 percent of them are working in food-centric fields.

The Floured Apron partnered with one social service agency in the first year.

Today 20 agencies assist the organization, which serves as a bridge to fulfilling jobs.

Boling showed up at a women’s shelter in Rogers Park to introduce her program for the first time. Ten women listened to her pitch.

Ten women will never forget what Boling was wearing that day.

“I had on a Pepto-Bismol-pink coat,” recalls Boling, who majored in chemical engineering at Northwestern University and later earned a graduate degree in public policy at the University of Chicago in 2008. “I had no idea how my concept would be received. But I was determined to teach others what I’d learned from my grandmother in her kitchen. Baking — it’s a great equalizer, and it brings people together.

“Some of our students travel to class from as far away as the South Side. It takes one of them two-and-a-half hours [bus, train, another bus] to get to the church. We help women put together career plans, encourage them to develop good habits they’ll need as employees. Some didn’t even know you could make money and establish a career in baking.”

Boling chose to meet me for breakfast at The Original Green Bay Café in Winnetka. She had spent a good chunk of the morning running three-and-a-half miles. A former soccer player at St. Teresa’s Academy in Kansas City, Missouri, and a current youth soccer coach (two hours, every Wednesday), Boling orders a glass of water and the Breakfast Parfait — yogurt, granola and fruit.

Three weeks ago, she tells me, 52 third-graders at Hubbard Woods Elementary School held a bake sale. It raised $1,100, all of it going to The Floured Apron.

“These kids now, all of them, are into outreach programs; they’re doing meaningful things and enjoying all that goes into organizing a school project,” says Boling, named a 2017 Outstanding Volunteer by the Volunteer Center of Northeastern Metropolitan Chicago.

Boling met her future husband when both were junior engineering majors at Northwestern. Boling studied chemical engineering, while Oppenheim took computer engineering courses. Both had signed up to attend a weekend leadership retreat in Chicago.

“It’s a nerdy story, how it all started,” Boling admits. “I was an atypical engineering student — very outgoing. It’s a Saturday morning, and I see this 6-foot-5 guy at the retreat. I go up to him and say, ‘Hi, I’m Emily. Who are you?’ ”

Boling later invited NU students to join her for Saturday tutor sessions with young kids at an elementary school in Evanston. Oppenheim was a regular.

Their first date was breakfast at Walker Bros. The Original Pancake House in Wilmette. Emily had asked David.

David proposed to Emily on the Brooklyn Heights Promenade.

“We both love to cook,” Boling says, adding her husband’s specialty is spaghetti with turkey meatballs.

Boling’s dear Grandma Eve died in 2005. It devastated Emily Eve Boling, the mother of Maddie, whose middle name is … Eve.

“My grandmother taught me so much, and we spent so much time together in her kitchen, especially during the holidays,” says Boling, whose business card features an image of a scrumptious apple streusel cake. “My inspirations today are members of my family; my husband could not be more supportive than he is, and my parents (Landy and Mary Linda) have been wonderful.

“I remember sitting in my parents’ house in Kansas City and brainstorming for a name for my organization. Somebody said ‘apron’ and somebody else said ‘flour,’ and back and forth we went, discussing what sounded best and what made the most sense. I’m not sure who came up with ‘The Floured Apron’, but it doesn’t matter to me.

“We came up with it together.”

For more information about The Floured Apron, please visit theflouredapron.org