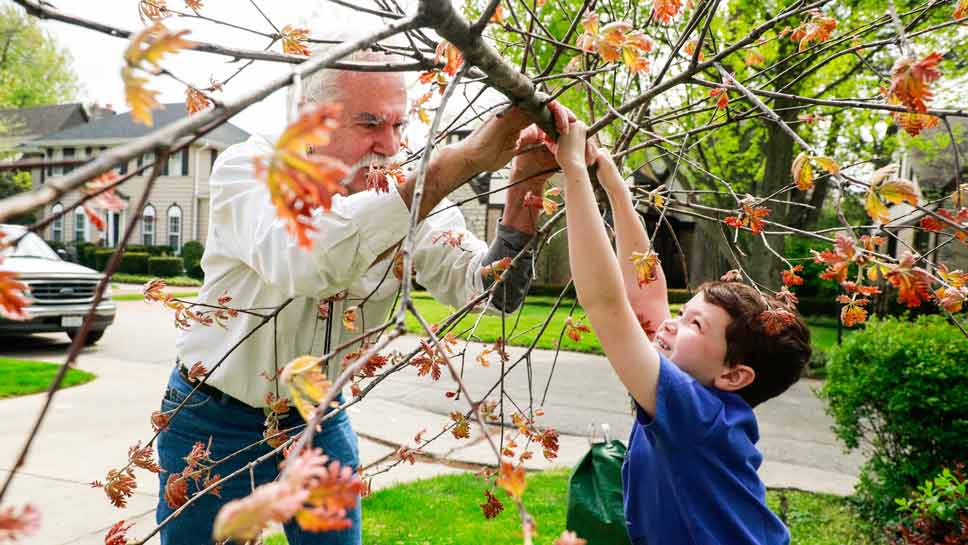 On the occasion of his eighth birthday in 2016, Winnetka’s Billy Cadigan received an 8-foot white oak tree to plant on the north side of his family’s driveway. It was the culmination of a family project to investigate the history of their home and replace a historically significant tree that had grown for 200 years in the same spot.

The infamous Fuller Lane tree was a Native American trail marker tree, a part of Native Americans’ navigation system that since the 1700s would have pointed travelers toward the resources they needed. Trees of certain species, bent in certain ways, showed travelers where to find water, shelter, medicinal plants, copper or stone deposits. Such trees inspired the Village of Winnetka’s logo and a retired logo of the Winnetka Historical Society, Historical Society Executive Director Tane Beecham said.

“Native American culture is certainly a part of our local history,” she said.

The Fuller Lane tree, also a white oak, died and was removed in 1984, but the Cadigan family acted this spring to recreate and honor that local history by bending Billy Cadigan’s white oak tree in the 100 block of Fuller Lane in a similar manner.

Antioch-based artist, author and trail marker tree expert Dennis Downes tethered the top of Billy Cadigan’s now 10-foot tree to a stake in the ground and weighted the center of the trunk with a rock wrapped in buckskin. The goal is for the trunk to grow parallel to the ground while the branches reach skyward, just as the original Fuller Lane tree did for 200 years.

“The original tree was very much a part of the history of Winnetka,” Billy’s dad, Bill Cadigan, said. “It is a vital part of the history of our home, too, and a fun thing for Billy to be a part of the process of replacing it.” Bill Cadigan stumbled upon the historic nature of his property when he moved to the area in 2008. He was at the Winnetka Historical Society for an unrelated exhibit on local war veterans when he spotted an old photo of the Fuller Lane Tree and his home. Beside the tree was a metal plaque that told passers-by of the historical significance of trail marker trees.

“The Potawatomi didn’t live here normally; this was new territory for them, and so they would have used this tree-bending technique a lot more frequently to learn their way around, just as if I moved to a different state and didn’t know where anything was,” Downes explained as he worked to weight the Cadigan’s tree in May. “But because this was Potawatomi land it didn’t get logged as radically as other areas, and their trail marker trees lasted a lot longer. They talked with the trappers who came to this area and explained what a lot of the markers meant.” 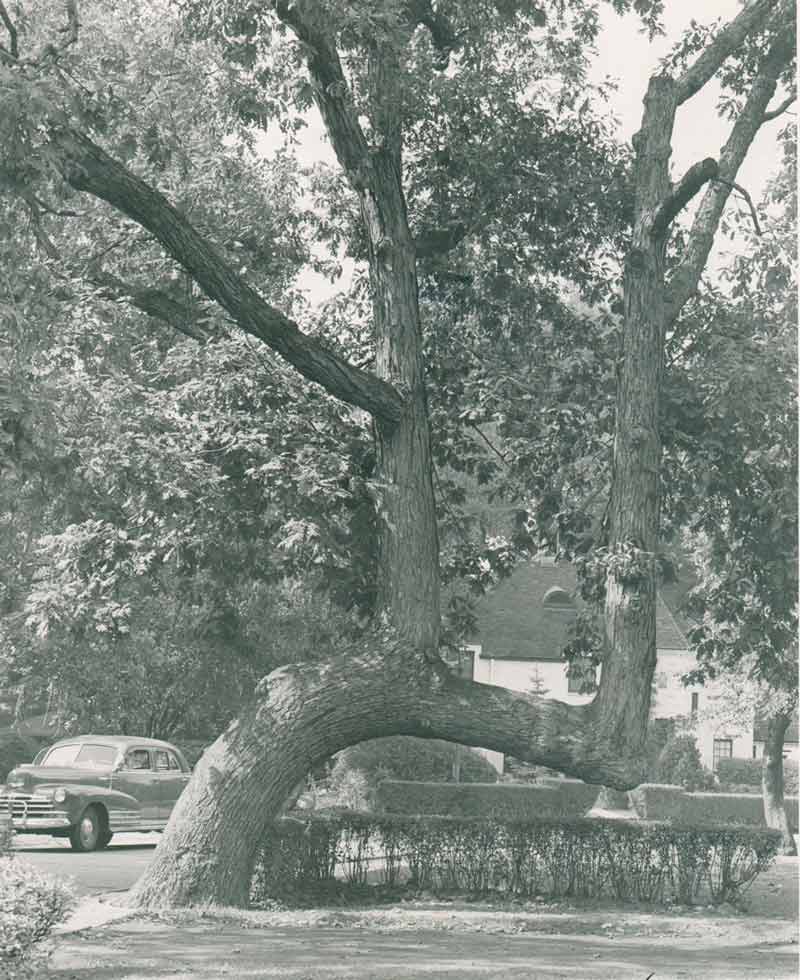 Winnetka’s treasured white oak came to the end of its journey in 1984. Photo courtesy of the Cadigans 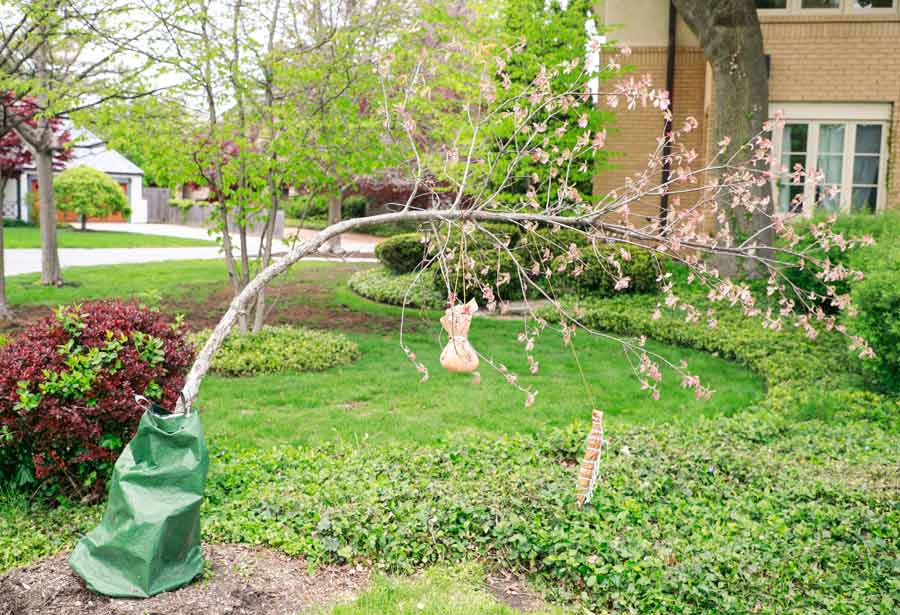 As the Cadigans met more of their neighbors a decade ago, Bill Cadigan recalled, they found that everyone knew exactly where they lived because everyone remembered that old, bent tree.

“What we found was that we couldn’t live in this house and not learn the history of the trail marker trees,” Bill Cadigan said. “There are people who grew up in this neighborhood and moved away and come back for reunions at New Trier High School who have knocked on our door and asked about that tree.”

And so the family project was born. They discovered Downes’ 2011 book about trail marker trees and sought more information from him personally. Village Forester Jim Steir helped them locate an appropriate replacement tree, and a year after Billy Cadigan planted his tree, Downes visited to bend it as Native Americans would have.

Downes predicted that the young white oak tree on Fuller Lane will remain that way – tethered to the ground and weighed with a big rock – for about five years, so that the tree adopts the desired shape. He’ll visit from time to time to help Billy Cadigan prune it and encourage the strongest branches to grow toward the sun.

Billy Cadigan said the coolest part of his family’s history project was thinking about all that the original tree had survived in its 200 years, ranging from harsh winters to wars.

“This is kind of a reboot of the original, and when people walk by now I hope they see this one and say, ‘wow, they actually did that,’” he said.

“There’s a saying that you don’t plant a tree for yourself but for future generations to enjoy and we certainly hope Billy will come back to this neighborhood and have memories of this home and his childhood here.”