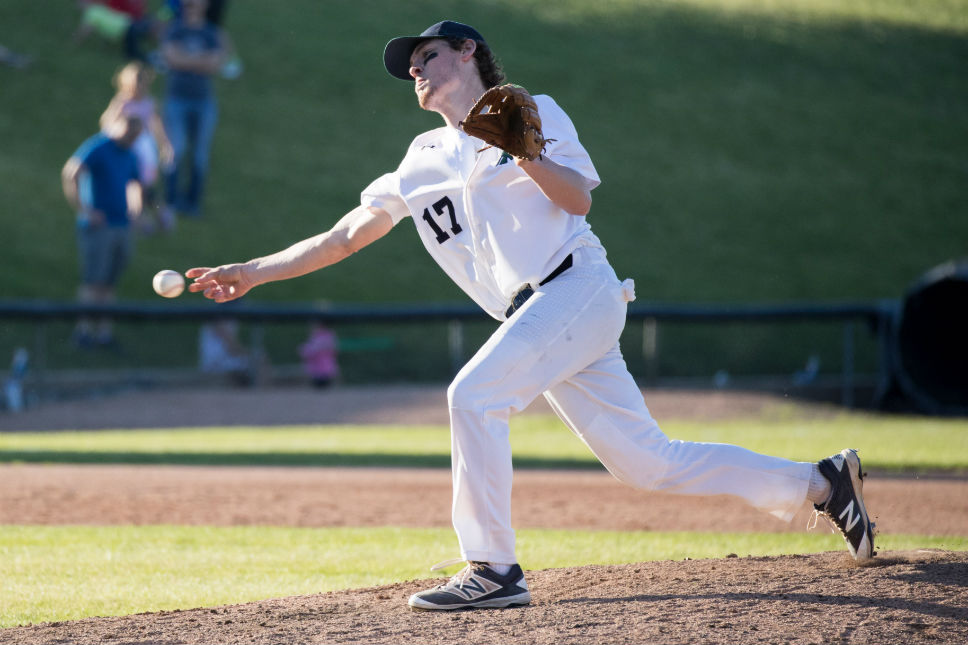 But the play that the New Trier senior made in left field in the top of the third inning was … Gold Glove good.

Just possibly, it was the moment of truth in New Trier’s 8-2 victory over Fenwick High School in the title game of the Class 4A Lane Tech Sectional on June 3 at Kerry Wood Cubs Field in Chicago.

“I thought it was the biggest play of the game,” New Trier head coach Mike Napoleon said.

The game, at that juncture, was tilting Fenwick’s way.

Talk about minimizing the damage.

With runners on first and second and no one out, Fenwick’s No. 4 hitter Anthony Cavalieri laced a line drive over Douaire’s head and one-hopped the chain-linked fence.

Not exactly. Douaire played the ball perfectly. He quickly went back to the fence, snagged the ball and threw a BB back into the infield, allowing only one run to score while holding Cavalieri to a very long single and keeping the base runner on first — Casey O’Laughlin — from advancing to third.

“That was not an easy play to make,” said Napoleon, who has more than 800 career coaching wins. “ It’s especially hard to play a ball off a chain fence like that.

“If he doesn’t make that play, then they could have had runners on second and third with no outs, with their studs coming up,” the coach added.

Douaire realized, at the time, that he had very little room for “aire”.

“I knew the ball was going over my head,” he said. “I just tried to get to it as fast as I could. [Fortunately] the ball bounced right to me. Perfectly.”

The rest of the inning, with sophomore Patrick Jodloman pitching in relief of starter Spencer Beacom, played out perfectly for the 29-4 Trevians, who will play South Elgin in the supersectional at Boomers Stadium in Schaumburg on June 5 (5 p.m.).

Jodloman set down the next three Fenwick hitters in order, and New Trier got out the inning barely scathed, trailing only by a run (2-1).

It was all New Trier — and more Douaire — the rest of the way.

After subduing the Friars’ hopes for a big inning, the submarine reliever went to the mound. He worked the final four frames, scattered three hits, walked no one and picked up the save.

“It felt good to be out there,” said Douaire, a right-hander who plans to play club baseball at Xavier University in Cincinnati. “I didn’t think I’d be out there for four innings. But the innings moved fast.”

A former starter, Douaire switched roles midway through the season. And with Jodloman and senior Jack Falk also in the mix, the Trevians have a deep and talented bullpen.

Douaire is earning trust. He also threw the final two innings (1 hit, 3 Ks) and earned the save in NT’s 3-1 win over Niles West in the regional final on May 27.

“It’s hard for hitters to pick up on his pitches,” said Napoleon. “He gets a lot of ground balls.

“He’s just so athletic,” the coach added. “When he’s on the mound, you see how well he fields his position.”

Speaking of defense, New Trier made just one inconsequential error over the seven innings.

Besides the play Douaire made in left field, the Trevians had a couple other defensive highlights. In the first inning, Calarco took a relay throw from NT center fielder Eric Nicholas and threw out O’Laughlin, who had strayed too far off second following an RBI single by Cavalieri. Then, in the sixth, they turned a swift 6-4-3 (Kevin Donahue-to-Payton Burch-to-Anthony Calarco) double play.

“They gave us some runs, but good teams take advantage of the other team’s miscues,” Napoleon said.

The team’s first run, in the second inning, was manufactured. Cam Redding walked, went to second on a ground-ball single by Calarco, moved to third on a sacrifice bunt by Douaire and scored on a sac fly by junior third baseman Nate Shapiro.

New Trier scored twice in the third inning to take its first lead of the game and make a winner out of Jodloman. The inning featured hits by Matt Kann (one-out double), Donahue (one-out single) and Redding (run-scoring single) and a balk by the Fenwick hurler.

Then, in the fifth, Calarco singled and came home on a double by Shapiro.

“It always feels great to contribute to the team,” said Shapiro, who broke into the starting lineup in early May. “I just want to do what I can.

“I’m seeing the ball pretty well right now,” he added. “And making an adjustment with my timing has helped. I’m getting my front foot down a little earlier.”

Napoleon likes the mood and demeanor of his team heading into Monday’s Elite Eight game.

“Not a lot of our guys will be going on and playing in college,” he said. “So this is their Super Bowl.” 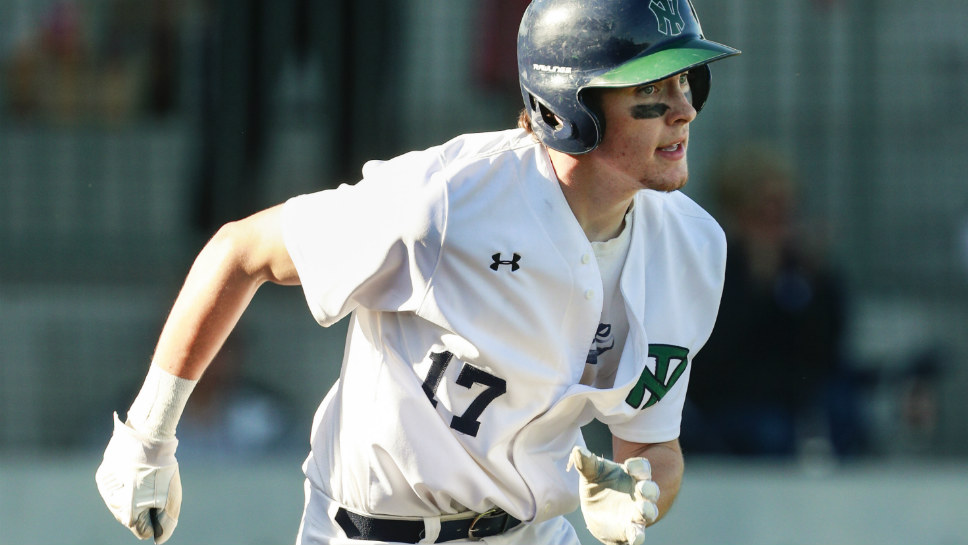 Senior Sean Douaire, seen here in the sectional semifinal, earned the save on the mound and made a great play in the field in New Trier’s sectional final win over Fenwick. PHOTOGRAPHY BY JOEL LERNER