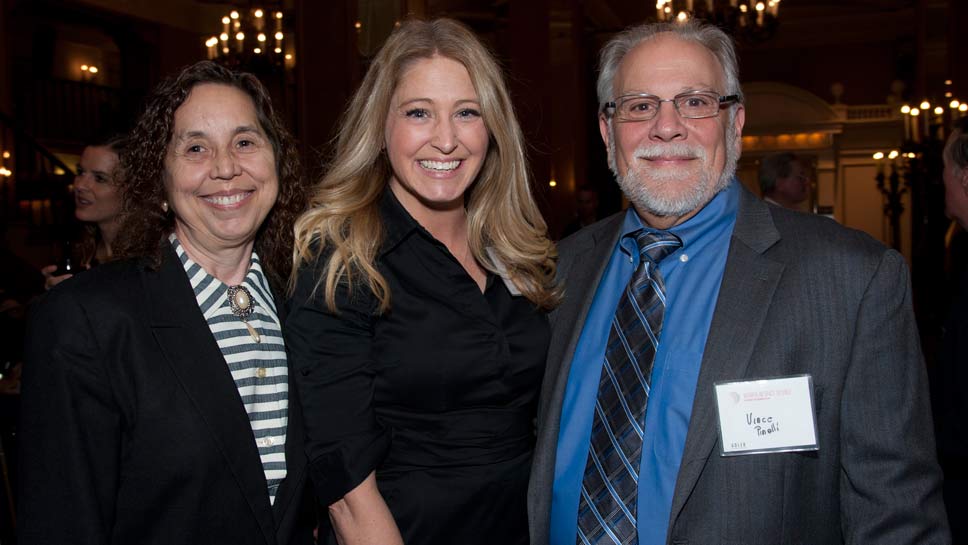 As a student attending Glenbrook North High School in the late 1980s, Northbrook native Beth Moses remembers the day she was given a brochure describing the long list of specialties and occupations available to scientists at NASA.

“My eyes landed on the words ‘aerospace engineer,’” she recalled. “I knew when I read those words it expressed what I wanted to learn and do and be.”

Now based out of the company’s headquarters in Los Angeles, Moses returned to her Chicago roots on May 11 to receive the Adler Planetarium’s 15th Annual Women in Space Science Award. Sponsored by members of the Adler’s Women’s Board, the annual award honors pioneering women in the fields of science, technology, engineering and math (STEM) whose achievement and vision inspire others.

Moses accepted the prestigious award at a charitable luncheon held at the Drake Hotel and attended by more than 400 Adler supporters, who together raised nearly $160,000 towards Adler’s ongoing STEM education programs, including a gathering Moses attended at the planetarium later that same day. There, Moses spent an afternoon interacting with 225 7th-9th grade girls from middle schools across greater Chicago who had gathered to participate in science workshops and hands-on experiments led by the planetarium’s astronomers and teachers.

“Our goal with this annual award and STEM workshop is to reach young girls at a critical time in their education,” said Adler spokesperson Jennifer Howell. “Middle school is typically a time when students begin choosing coursework that could impact their future college and career plans.”

Among those in attendance was Moses’ former GBN science teacher and “friend for life,” Lynne Zielinski, who taught at the high school for three decades before retiring in 2011.

“Beth’s desire to understand the nature of science and space was infectious,” recalled Zielinski. “Her bright personality brought an enthusiasm that motivated those around her.”

After graduating from Glenbrook North in 1987, Moses went on to study aerospace engineering at Purdue University. In 1989, less than two years out of GBN, Moses landed a job working for NASA as an intern, eventually rising to oversee design of the International Space Station.

Despite the fact that women make up just 11 percent of aerospace engineers in the U.S., according to a 2013 study by the U.S. Census Bureau, Moses said she’s never faced gender discrimination.

“Engineers don’t come in pink or blue,” Moses said. “Consider that many engineering projects today are building something complex that serves the whole globe – be it the International Space Station or the Virgin Galactic ships. In that environment, gender is negligible.”

Moses does pay tribute to female astronaut Sally Ride, and other women who made inroads before her, but claims she’s never known a time when aerospace was not inclusive.

When asked what the future holds for space travel, Moses said she believes the world’s first space tourists will be launched into the earth’s orbit, and possibly beyond, in the not too distant future.

“Virgin Galactic will start commercial service when we safely conclude our flight test program, which is underway,” she said. “I don’t know when people will make it to other planets, but I hope soon.”