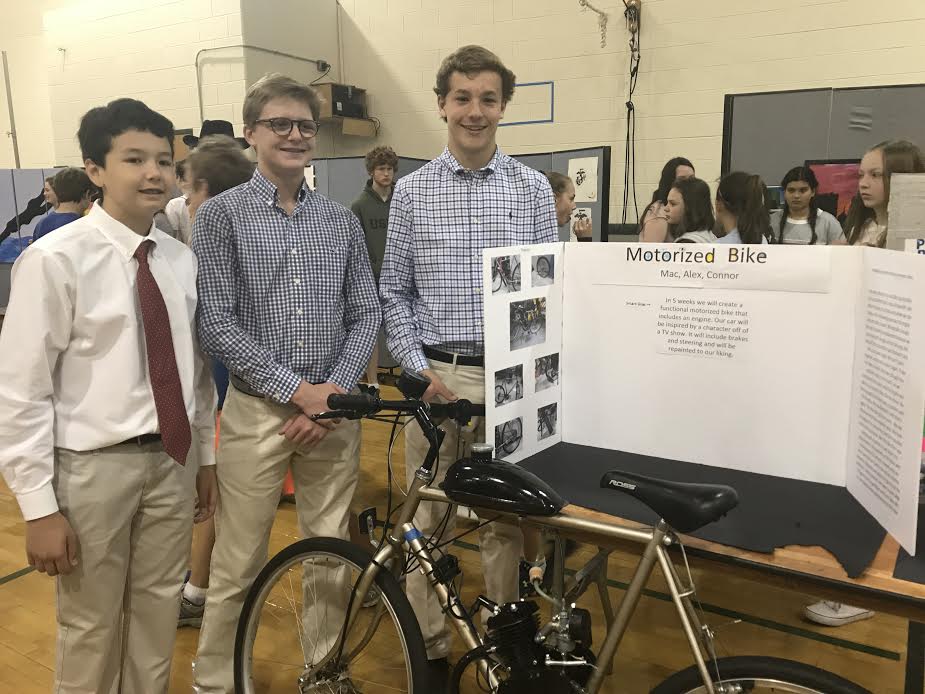 LAKE FOREST — Passion for Deer Path Middle School eighth graders can come in the form of writing a cookbook, motorizing a bicycle, building a website or crafting scores of other projects as part of a 12-week course allowing them to let their creative juices flow.

The eighth grade students displayed their completed projects during the Creative Arts Passion Project Expo May 26 at the Deer Path Middle School in Lake Forest, giving the public a glance at their creativity.

Creative arts at Deer Path include art, home arts, speech and drama, media arts and STEM (science, technology, engineering and math), according to Karen Pedersden, one of the teachers who helped organize the expo.

During their time at the school, Pedersen said, students take a combination of the creative arts subjects but spend the final 12 weeks of their eighth grade year developing a single project using one or more of the skills they learned.

“They have to do research and gather their information,” said Pedersen. “Things can get crazy for them when what they come up with does not work the way they want. They have to look for other ways to do it.”

Pedersen said the project must be realistic and the students have to be prepared to change what they are doing along the way when it is not working as planned. One team of three students—Teddy Buhl, Alex Miller and Ben Andreesen—designed a website devoted to providing visitors to the site with information about basketball.

Buhl, Miller and Andreesen went to GoDaddy to create the site for free. They said they got it up and running and were happy with their progress. Then they realized they did not read the fine print before clicking accept and found themselves with four days to salvage their project.

“They were going to shut it down in four days unless we paid $100 for a year,” said Buhl. “We only needed it for 12 weeks and didn’t want to pay for a year.”

Eventually they learned a valuable real world lesson: A teacher at Deer Path knew someone at GoDaddy and the connection paid off.

“The teacher went to GoDaddy and we got it free for a year,” said Miller.

Using a variety of statistics available on players in the National Basketball Association, the three young web developers developed ratings for the best players at each position, according to Miller. They also created trading cards for the athletes. At this point Buhl said they were not sure if they will develop the site into a permanent business.

Things went more smoothly for Sophie Gambit, Eden Kavanagh and Ella Czerniejewski, who wrote cookbooks with recipes they tested out to make sure they worked. They all said the taste tests went well.

Czerniejewski created a collection of recipes on her own while Gambit and Kavanagh collaborated. Czerniejewski said her book offers dishes for holidays including Easter, St. Patrick’s Day, the Fourth of July, Halloween, Thanksgiving, Christmas and New Year’s.

“There’s an American flag cake for the Fourth of July,” said Czerniejewski. “When you cut into it it’s red, white and blue.”

Kavanagh said she is enthralled with the baking her mother does around the house and wanted to share it with others by developing a cookbook.

“We wanted ones that were simple to make,” Gambit said. “We tried to make all the recipes.”

Originally Mac Uihlein, Connor Armstrong and Alex Park set out to build a Go-Kart. Then Armstrong was on a trip to Quincy and saw a bicycle capable of being powered by pedals, a gasoline engine or both.

“It was really cool,” said Armstrong. “You don’t have to peddle.”

After doing some research, Park said they learned no license was necessary to ride a motorized bike around Lake Forest making it an ideal way for eighth graders to get around. They found a bike they could transform, attached the engine and gears and tested it out.

Uihlein, who can pedal a bicycle approximately 20 miles per hour, said their creation tops out at 25.

Digital arts creations included a Kinex sculpture with time lapse video, a 3-D printed tea set and infomercial, a documentary on poaching and a short film spinoff of the television show “The Office entitled “DPM Braves,” according to Pedersen.

Other home arts projects include repurposed clothing, preemie baby hat donations made by former preemies and beanies for babies, according to Pedersen.

Concentrating their effort on speech and drama, Pedersen said there was a basketball documentary and another hoops production on the Top 10 NBA players. There were also duct tape costumes. 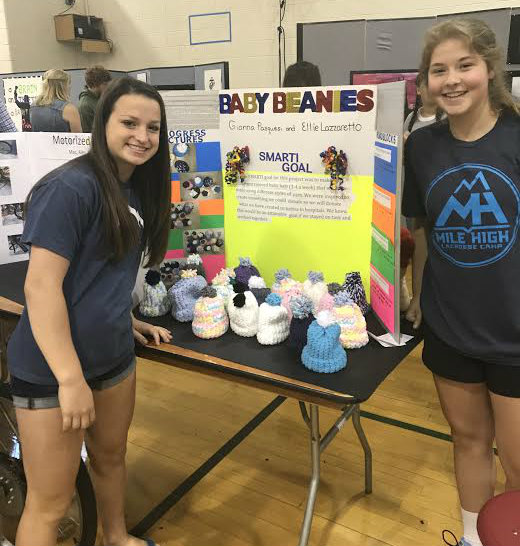 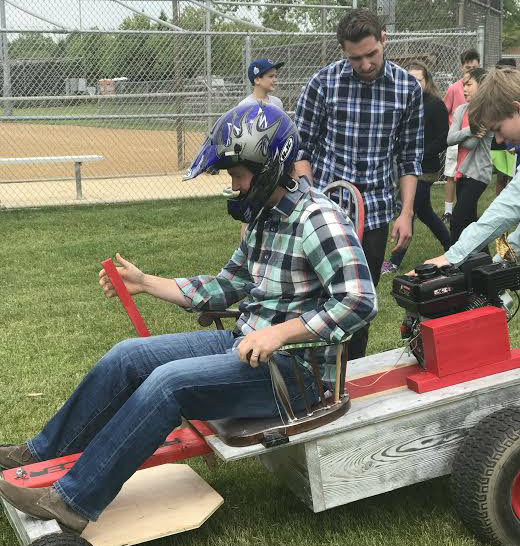 Trying out a student made Go-Kart is Deer Path Middle School Assistant Principal Mike Field while STEM teacher (left) Anthony Pollina and Jack Marshall, one of the students who designed it, watch. Photo courtesy of Lake Forest School District 67. 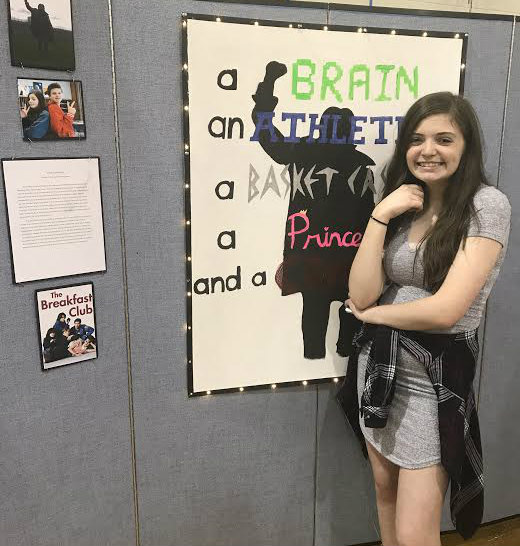 Standing in front of her project is Colleen Sarver. Photo courtesy of Lake Forest School District 67.