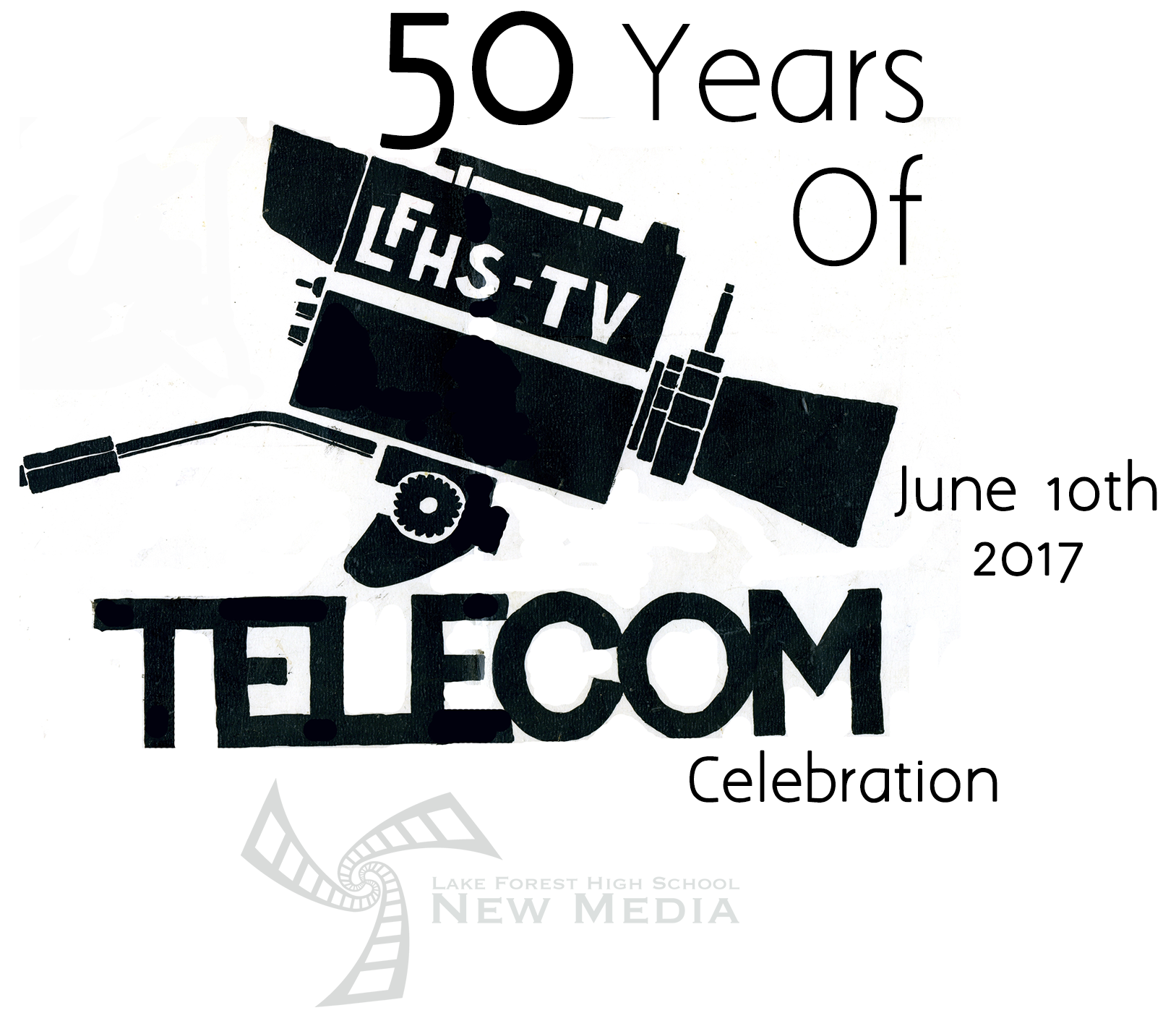 On June 9 and 10, join Dave Miller, Steve Douglass, and 50 years of Telecom alums in reminiscing about the class that hooked generations of people on visual storytelling.

Dave Miller is quick to tell everyone that this isn’t about him.

“I had a very nice retirement party back when I retired,” Miller says. “All the comments and everything are really nice, but this is about the classes and everybody who came through and the work that they did.”

Coming up on June 9 and 10, Miller, one of the original founders of the Telecom department at Lake Forest High School (LFHS), and Steve Douglass, the teacher of the New Media curriculum it’s become, intend to celebrate 50 Years of Telecom in a big way at the Gorton Community Center.

On Friday, June 9, it’s a chance to see what the current program is producing with this year’s version of the Best of Telecom awards, a film showcase that Douglass has been putting on for more than a decade showing some of the finest examples of the highly polished work coming out of the New Media department. It’s also a chance to hear from the students themselves.

Saturday, June 10 from 7 to 10 p.m., will basically be a very specific type of high school reunion. It’s a chance for everybody who found their love of storytelling to come together and reminisce about all the hours they spent in that basement cutting reel to reel, tape to tape, operating the board, adding video toaster titles and graphics, or experiencing the final freedom of digital, non-linear editing. The evening will include screenings of old projects, Q and As with some alums, as well as a screening of new clips sent in from a variety of people letting everyone know where they are now and how Telecom helped shape their path there.

The tales of Vince Vaughn’s early days are Telecom legend. The most circulated example of his Telecom work is LF Vice, the Miami Vice parody he did with constant Telecom collaborator Paul Boese, who’s also currently out in Los Angeles working as a producer. But Vaughn is only the most obvious example of someone who fostered the love of storytelling in Telecom and continued telling stories for a living.

Dave Eggers, author of A Heartbreaking Work of Staggering Genius and screenwriter of Away We Go, never officially took the class, but spent a lot of time in the basement collaborating with his friends and appearing in their videos. Eggers is one of the alums who sent in material for the June 10 event.

Alex Timbers, just announced as the director of Disney’s big screen Cruella starring Emma Stone, was another telecom regular. In 1996, Timbers took the helm of a cable access show on Lake Forest TV called The Ill Puppets, a sketch comedy show that was handed down through several generations of die hard Telecommies, but “not at all affiliated with the high school,” Miller reminds us. In an interview with The New Yorker after his breakout success with the Tony-nominated Bloody Bloody Andrew Jackson, Timbers fondly recounted an Ill Puppets sketch of his in which a man develops a deep attachment to his tapeworm.

So many people who gravitated to Telecom at LFHS continued into the field of visual storytelling. Reid Carolin wrote and produced both Magic Mike films starring Channing Tatum. Stephen Platcow produced the documentary Not Yet Begun to Fight about American soldiers battling PTSD through the meditative practice of fly fishing. Randy Bell is more than a decade into a documentary following the lives of five orphans in Kenya called The Mathare Project. Tim Ferrin is in the final stages of a documentary on the life of legendary children’s musician Ella Jenkins called We’ll Sing a Song Together. Brothers Ryan and David Wolff are producers and editors on the documentary web show The Good Stuff for PBS Digital. Jordan Balderas is a camera operator with a laundry list of television credits including Steve Harvey. Charlie Alves did the video direction for Blue Man Group and it led to doing all of the pyrotechnics and video for the world tours of Avicii and Bastille. Matt Romito built out the infrastructure and runs the video boards for every Cubs game at Wrigley.

That legacy continues under the branding New Media, now that the TV studio has been moved from the basement to the second floor, taking up a lot more space and visibility, just as the video arts have in the cultural conversation.

Lain Kienzle is a New Media alum whose short films have played in many film festivals and is currently working to produce and direct her first feature based on her play The Mouse and the Lion. Myles Beeson shot for a just released NatGeo movie and camera operates on all manner of commercials. Cody Vandenberg is a post-production supervisor at Lucas Films and has worked on the last three Star Wars movies. Hunter Ries is a writer for Nickelodeon. Noel Brennan is now a multimedia reporter for KUSA-TV in Denver and received two Emmy nominations for his work on the evening news.

The fascination with storytelling that people develop in the video classes at LFHS, no matter the name it’s going by, is a fascination that many students go on to explore for the rest of their lives.

“I hear it from alums all the time, making videos is what got them through high school, and now they’re doing amazing things,” says Douglass. “Storytelling is essential to what they do. That is the basis of everything they do professionally. We want to celebrate how Telecom helped shape the way people learned to tell stories visually. It’s a tremendous legacy for my current students to see what came before them.”

Telecom started out of LFHS’s foreign language lab in the late ‘60s. The superintendent at the time won a black and white television system at a conference and asked three foreign language teachers–Dave Miller and Joe Lawlor, who taught Spanish, and Paul Whiting, who taught French–if they thought they could do anything with it. He came to them because they ran the language lab and were the most familiar with recording equipment. The system was massive with open half-inch tape reels spooling away on a console and a big black and white TV camera. Prior to that, Miller had never even thought about teaching video. 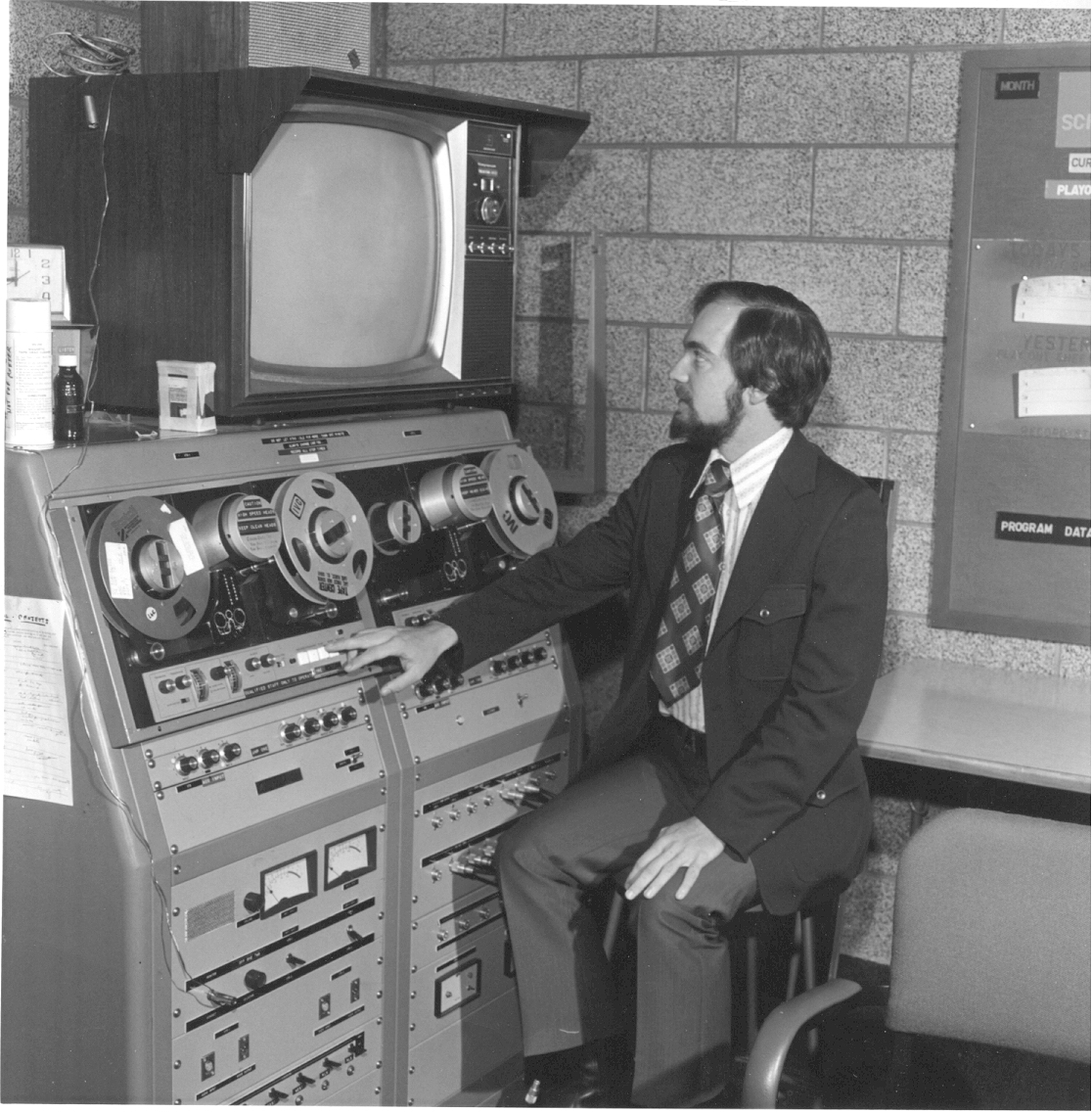 David Miller in the early days of Telecom

The Language Lab became the Tape Center and they began recording educational shows about foreign language with A/V students as volunteer crew. Miller, Lawlor, and Whiting went to Columbia College in Chicago to get certified to teach television production. In the early ‘70s, another space opened up and they turned it into a TV studio much like the ones the school has had ever since, three cameras, a bare-bones set, and a switching system for making live edits. Not long after they moved into portable cameras.

“Portable,” says Miller, making air quotes. “It was like a small suitcase you carried around recording to an open reel and a big camera that was heavier than anything.”

But enrollment just kept growing and they added more and more classes. The equipment kept evolving–camcorders that took VHS tapes, editing systems, computers for adding text and graphics. Now, students are shooting on DSLR cameras with gorgeous swappable lenses and editing in Final Cut Pro where they can annotate comments to each other for easy re-edits based on the feedback of Douglass and their peers.

Where Telecom always emphasized the importance of continuity, clarity, and brevity in storytelling, Douglass now shapes the curriculum to reflect much of the video work awaiting students once they graduate and form their own production companies. The subject matter is less about sketches and skateboard videos and more about making commercials for local businesses, promotional videos for local charities, and character-centered documentary profiles.

“One project in New Media is typically about six to seven weeks,” Douglass says. “Two to three weeks of pitching and pre-production. Two to three of actual production, which coincides with post. Then we run through three or four drafts: rough cut; check in; a 90 percent check in, where they all give each other feedback annotated within Final Cut. We finish up with a whole class critique and the fourth layer of feedback is the community.”

Examples of the work coming out of New Media can be seen in the form of promotional videos for the 50-year celebration on LFHS New Media’s Facebook page. Even more will be on display at the Best of Telecom event on June 9, open for free to the public.

“I was very much taken with the idea that kids need a home turf,” Miller says. “They need a place where they feel welcome. That’s why I wanted to go with this idea of the Best of Telecom awards being voted on by students. We wanted you to make videos for your peers, not whoever’s teaching the class. We just wanted to make Telecom a place where people wanted to be.”

It’s exactly because they succeeded so wildly, that I’m sure it’s a place that many will want to honor on June 10. So mark your in-points for 7 p.m. Telecom-alums, and join Miller and Douglass at the John and Nancy Hughes Theater in the Gorton Community Center to celebrate 50 years of wonderful storytelling.