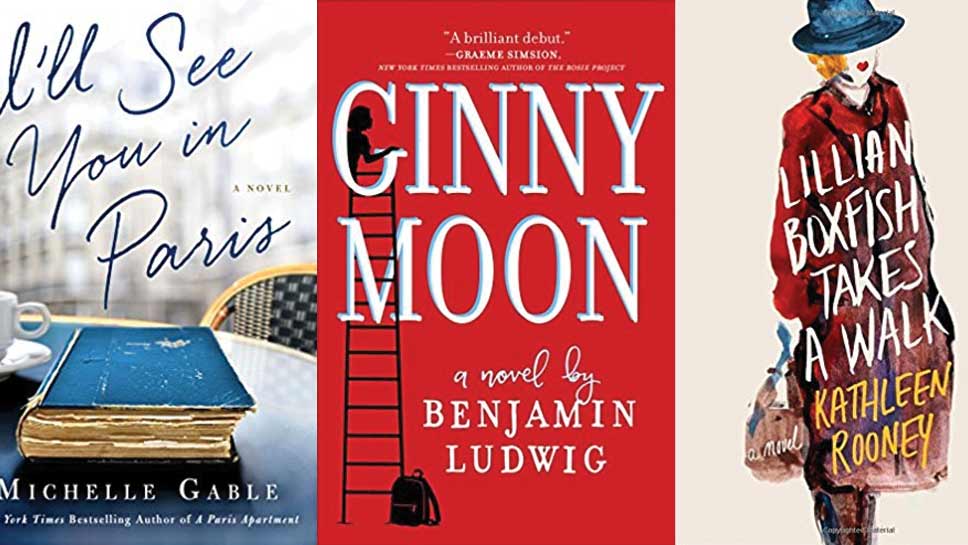 Summer is around the corner, which means it’s time to grab a great book and let your mind travel. The best summer reading recommendations are coming from our local book stores. These stories are guaranteed to capture you with their accounts of family ties, imprisonment, love against all odds, and even winning the World Series. Whether you’re lounging by the pool, headed to the beach, or settling in for a road trip, these local book stores have you covered. Check out the lists below for fabulous tales full of adventure, love, heartbreak, comedy, and suspense.

Saints for All Occasions by Courtney Sullivan (Hardcover)- This is a family saga about two sisters, one the matriarch of a Boston family and the other a cloistered nun. Their family secrets can keep anyone interested.

A Gentleman In Moscow by Amor Towles (Hardcover)- Towles has written a beautiful period piece about Moscow and the rise of Communism.

News of the World by Paulette Jiles (Hardcover)- Captain Kidd is riding across Texas after the Civil War telling people the news of  the world. On his journey, he is tasked with returning a young girl who had been captured by the Indians to her white family.

The Simplicity of Cider by Amy Reichert (Paperback)- Fans of The Coincidence of Coconut Cake will enjoy this story set in Door County. Sanna is trying to save the family apple orchard while getting her cider business up and running. Isaac is trying to help his son Sebastian have a great summer. The story of them coming together is most definitely sweet.

Last Days of Night by Graham Moore (Paperback)- You might not think a story about a patent law suit between Edison and Westinghouse could be appealing but this story will surely keep you fascinated.

Book of Summer by Michelle Gable (Paperback)- Set in Nantucket, this book revolves around the guest book used for 99 years in Bess’s summer home. It contains not just signatures but stories of past friends and relatives who visited. A lovely summer read.

The Black Book by James Patterson and David Ellis (Hardcover)- Prolific writer James Patterson is at his best with strong co-author David Ellis. Think Blue Bloods in Chicago for this fast paced mystery. It is the story of a father who is the chief of detectives with his twin children on the force. A real page turner.

Under the Harrow by Flynn Berry (Paperback)- Berry just won the Edgar Award for this dark mystery. When Nora makes her regular visit to her sister, instead of Rachel’s home cooking, she finds her sister dead. The plot moves tightly on from there.

Blackout by Marc Elsberg (Hardcover)- This international best seller centers around the collapse of the electrical grid in Europe. Former hacker Piero is asked by Interpol to help figure out how to get the lights back on. This is a timely and tense thriller.

Girl in Disguise by Greer Macallister (Hardcover)- This story of the first female Pinkerton detective set in 1856 Chicago is exciting and well crafted.

Ginny Moon by Benjamin Ludwig (Hardcover, $26.95)- Ginny is a recently adopted teenager with autism. She has a new home, new parents, and a new last name. But Ginny is desperate to get back to where she came from, back to what she left behind. Because something heartbreaking happened there and nothing will stop her from going back to make it right. She’ll even get herself kidnapped.

The Stars Are Fire by Anita Shreve (Hardcover, $25.95)- From the New York Times best-selling author of The Weight of Water and The Pilot’s Wife: an exquisitely suspenseful new novel about an extraordinary young woman tested by a catastrophic event and its devastating aftermath– based on the true story of the largest fire in Maine’s history.

Saints for All Occasions by J. Courtney Sullivan (Hardcover, $26.95)- A novel about two sisters—one the matriarch of a boisterous Irish Catholic family, the other a cloistered nun, hidden from the world—and the secret that drove them apart. A graceful, supremely moving novel, Saints for All Occasions explores the fascinating, funny, and sometimes achingly sad ways a family’s secret both breaks them and binds them together.

Behold the Dreamers by Imbolo Mbue (Hardcover, $28.00)- Imbolo Mbue’s debut novel about marriage, immigration, class, race, and the trapdoors in the American Dream tells the story of a young Cameroonian couple making a new life in New York just as the Great Recession upends the economy.

Homegoing by Yaa Gyasi (Paperback, $16.00)- Ghana, eighteenth century: two half sisters are born into different villages. One will marry an Englishman and lead a life of comfort in Cape Coast Castle. The other will be captured in a raid on her village, imprisoned in the very same castle, and sold into slavery. Gyasi’s extraordinary novel illuminates slavery’s troubled legacy both for those who were taken and those who stayed—and shows how the memory of captivity has been inscribed on the soul of our nation.

The Last Days of Night by Graham Moore (Paperback, $17.00)- New York, 1888. A young lawyer named Paul Cravath takes a case that seems impossible to win. Paul’s client, George Westinghouse, has been sued by Thomas Edison over a billion-dollar question: Who invented the light bulb and holds the right to power the country?

The Tea Girl of Hummingbird Lane by Lisa See (Hardcover, $27.00)- A thrilling new novel from #1 New York Times bestselling author Lisa See explores the lives of a Chinese mother and her daughter who has been adopted by an American couple. A powerful story about a family, separated by circumstances, culture, and distance, The Tea Girl of Hummingbird Lane paints an unforgettable portrait of a little known region and celebrates the bond that connects mothers and daughters.

Lillian Boxfish Takes a Walk by Kathleen Rooney (Hardcover, $25.99)- She took 1930s New York by storm, working her way up writing copy for R.H. Macy’s to become the highest paid advertising woman in the country. Now it’s the last night of 1984 and Lillian, 85 years old but just as sharp as ever, is on a walk that takes her over 10 miles around the city. She meets bartenders, bodega clerks, security guards, criminals, children, parents, and parents-to- be, while reviewing a life of excitement and adversity, passion and heartbreak, illuminating all the ways New York has changed– and has not.

All the Light We Cannot See by Anthony Doerr (Paperback, $17.00)- It’s finally in paperback! From the highly acclaimed, multiple award-winning Anthony Doerr, the stunningly beautiful instant New York Times bestseller about a blind French girl and a German boy whose paths collide in occupied France as both try to survive the devastation of World War II.

Mischling by Affinity Konar (Paperback, $16.99)- In 1944, twin sisters arrive at Auschwitz with their mother and grandfather. Pearl and Stasha Zagorski become part of the experimental population of twins known as Mengele’s Zoo and experience privileges and horrors unknown to others. Told in a voice as exquisite as it is boundlessly original, Mischling traverses one of the darkest moments in human history to show us the way toward ethereal beauty, moral reckoning, and soaring hope.

Richard Nixon: The Life by John A. Farrell (Hardcover, $35.00)- Meticulously researched, brilliantly crafted, and offering fresh revelations, this new biography of the 37th President will be hailed as a master work.

Killers of the Flower Moon: The Osage Murders and the Birth of the FBI by David Grann (Hardcover, $28.95)- David Grann revisits a shocking series of crimes in which dozens of people were murdered in cold blood. Based on years of research and startling new evidence, the book is a masterpiece of narrative nonfiction, as each step in the investigation reveals a series of sinister secrets and reversals. But more than that, it is a searing indictment of the callousness and prejudice toward Native Americans that allowed the murderers to operate with impunity for so long.

Rising Star: The Making of Barack Obama by David J. Garrow (Hardcover, $45.00)- Barack Obama’s speech at the 2004 Democratic National Convention instantly catapulted him into the national spotlight and led to his election four years later as America’s first African-American president. In this penetrating biography, David J. Garrow delivers an epic work about the life of Barack Obama, creating a rich tapestry of a life little understood until now.

Sam Shepard: A Life by John J. Winters (Hardcover, $30.00)- With more than fifty-five plays to his credit– including the 1979 Pulitzer Prize-winning Buried Child– an Oscar nod for his portrayal of Chuck Yeager in The Right Stuff, and an onscreen persona that’s been aptly summed up as &quot;Gary Cooper in denim,&quot; Sam Shepard’s impact on American theater and film ranks with the greatest playwrights and actors of the past half-century. Throughout this new biography, Winters gets to the heart of the enigma that is Sam Shepard, presenting a compelling and comprehensive account of his life and work.

Nevertheless: A Memoir by Alec Baldwin (Hardcover, $28.99)- One of the most accomplished and outspoken actors today chronicles the highs and lows of his life in this beautifully written, candid memoir. Told with his signature candor, astute observational savvy, and devastating wit, Nevertheless reveals an Alec Baldwin we have never fully seen before.

Letterman: The Last Giant of Late Night by Jason Zinoman (Hardcover, $28.99)- To understand popular culture today, it’s necessary to understand David Letterman. With this revealing biography, Zinoman offers a perceptive analysis of the man and the artist whose ironic voice and caustic meta-humor was critical to an entire generation of comedians and viewers– and whose singular style ushered in new tropes that have become cliches in comedy today.

The Cubs Way: The Zen of Building the Best Team in Baseball and Breaking the Curse by Tom Verducci (Hardcover, $28.00)- How did a team composed of unknown, young players and supposedly washed-up veterans come together to break the Curse of the Billy Goat? Tom Verducci, twice named National Sportswriter of the Year and co-writer of The Yankee Years with Joe Torre, has full access to team president Theo Epstein, manager Joe Maddon, and the players who tell the story of the Cubs’ transformation from perennial underachievers to the best team in baseball.

Lake Forest Book Store encourages you to come visit them in the store, as they look forward ​to helping you pick the perfect book for everyone in your family. Here are their summer picks!

The Book of Summer by Michelle Gable

The Light We Lost by Jill Santopolo

The Summer Guest by Alison Anderson

The Last Days of Night by Graham Moore

I Let You Go by Clare Mackintosh

I’ll See You in Paris by Michelle Gable

The Charm Bracelet by Viola Shipman