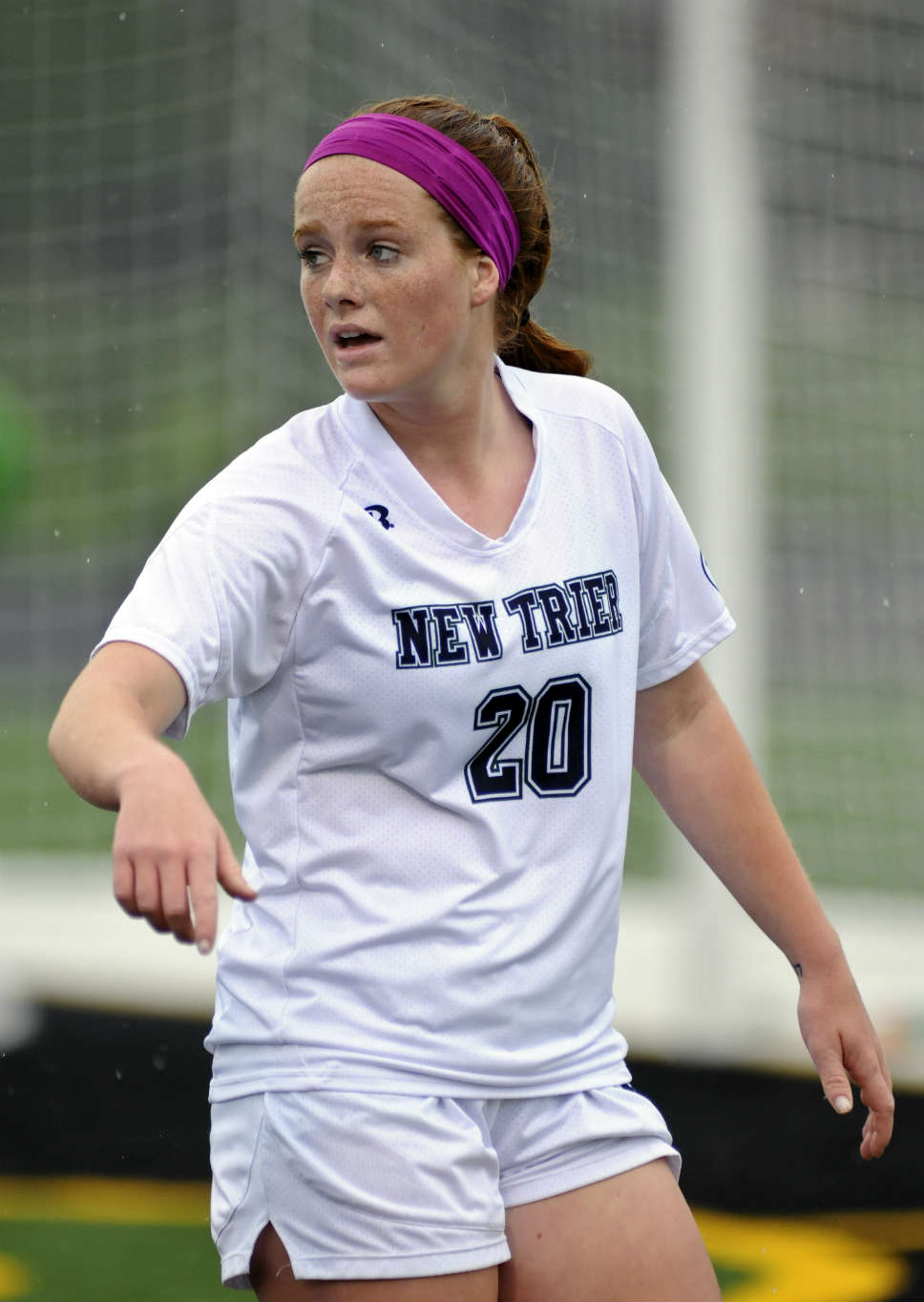 New Trier’s Hope Baisley, seen her against Glenbrook South in the sectional semifinal, turned in a stellar performance in her team’s 3-0 victory over Loyola Academy in Friday’s sectional final at Glenbrook North. PHOTOGRAPHY BY GEORGE PFOERTNER

The one wearing that colorful headwear — the ever-present and boundless Hope Baisley — was all over the field and hard to miss in the title game of the Class 3A Glenbrook North Sectional on May 26.

“She won every [50/50] head ball,” said New Trier head coach Jim Burnside. “Which is exactly what we asked her to do tonight.

“Hope is a Warrior out there,” the coach added. “It’s an honor to coach a kid like her.”

Baisley, a JV player during her first two seasons at New Trier, brings a physical presence to the field.

“I’ve found my role on this team,” said the Fordham University recruit. “For me, it’s all about the headers.”

Baisley and fellow midfielders Avery Schuldt and Lily Conley were in sync the whole night. The red-hot Ramblers, who entered the game with an 11-game win streak, struggled to get anything going.

In fact, the save numbers are quite astonishing. LA junior goalkeeper Maggie Avery was credited with 16 stops. NT senior goalie Katy Symanietz had zero saves.

Despite giving up three goals, Avery had an amazing outing for the 18-7 Ramblers.

“Maggie is a like a spider monkey back there,” said Baisley, who teams with Avery during the club season (FC United).

“I don’t know what that is. Just made it up,” Baisley said, with a laugh. “She throws her body around and gets to everything.

“Throughout the game, we kept telling her, ‘nice save, nice save,’ ” added Baisley.

New Trier eventually broke through. With 21:51 left in the first half, Hoban received a pass from Weaver and ripped a rocket just inside the box, which curled in and barely missed the right post.

Avery had no chance.

“Whitney has a real nose for the goal,” said Burnside.

“I have such high respect for Whitney,” Burnside said. “She has a great work ethic.”

Parker played an instrumental role in NT’s second goal, which came with 35:04 remaining in the second half. She moved up the field, dribbled down the right side and directed a perfectly placed cross to a waiting Kaspi in front of the LA net.

Kaspi, as it turned out, wouldn’t take no for an answer.

Avery dove and deflected Kaspi’s first shot. But the ball never left the vicinity, as Kaspi, a basketball player in the winter, tapped in a rebound.

“Sydney is hard to defend,” said the NT coach. “We ask her to read the game and look for times to release [and move upfield].”

“That’s the thing with Sydney,” Baisley added. “You can count on her to block shots at one end and score goals at the other end. She’s an amazing soccer player.”

Parker has yet to commit, which makes her one of the state’s top unsigned players.

New Trier capped the scoring with 7:53 left in regulation, when Conley whistled in a shot that slid under Avery’s hands.

The sectional title game didn’t go Loyola’s way. But LA coach Craig Snower couldn’t help but be pleased with the way his team came together this season.

“We started bad,” said Snower. “But we found it in the last 45 days. For us to finish 18-7 with everything we went through is pretty good.

“I think this team put us back on track,” the coach added.

Meanwhile, the season remains alive for the three-time reigning Class 3A state champs. The 22-2-1 Trevians will face St. Charles North in the Bartlett Supersectional on May 30.