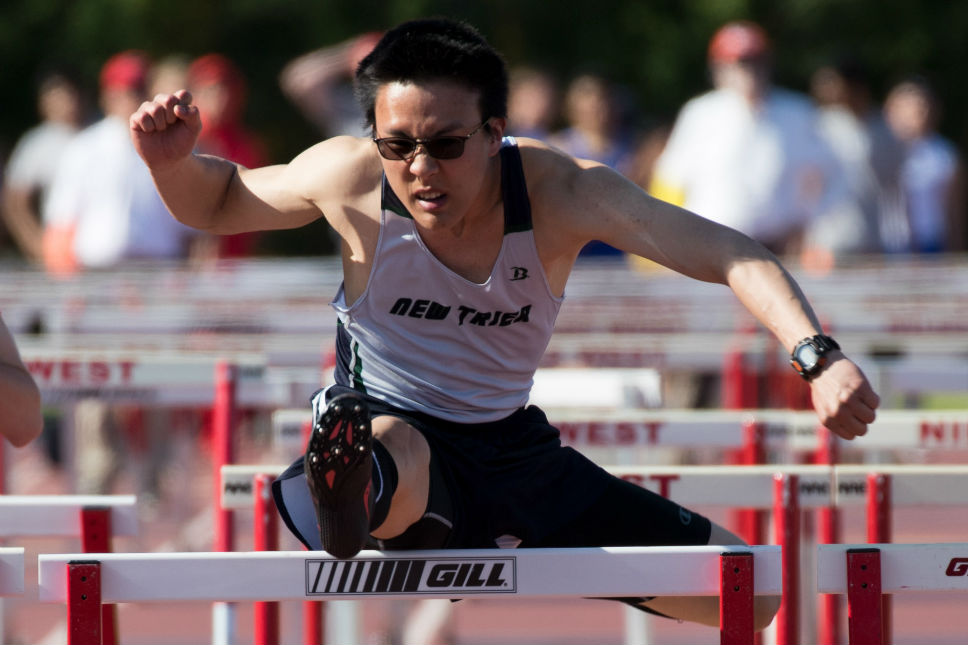 New Trier’s Albert Yen races to a first-place finish in the 110 hurdles at the Class 3A Niles West Sectional. He also won the 300 hurdles. PHOTOGRAPHY BY TING SHEN

Don’t get him wrong. Albert Yen wasn’t Hollywood-ing it.

It only looked that way.

“My glasses have transitional lens,” said the New Trier hurdler, following his victory in the 110-meter hurdles at the Class 3A Niles West Sectional on May 18.

Thus, on this sun-splashed late afternoon in Niles, his spectacles turned into hip sunglasses.

Yen also looked pretty stylish, when he glided to a first-place performance in the 300 hurdles (39.24).

The Trevian junior definitely has found his groove. He was the lone two-event champion at the sectional.

“I like Albert,” said NT assistant coach Johnse Holt, a former Big Ten track standout at the University of Wisconsin. “You only get one Albert [in a coaching career]. He’s very bright — and fun.

“He’s the full package,” Holt added. “He’s got desire, ability and focus. You put all those things together and good things happen. It means that you’re on it. You’re on your game.”

Competing in the state’s showcase meet is nothing new for Yen. He also qualified in both hurdle events last season.

Yen still is trying to smooth out things. In the 110s at Niles West, he clipped a number of hurdles.

“I hit at least four, maybe more,” he said. “But that’s better than usual.

“I’ve learned that if you hit one, you just keep going forward, “ Yen added. “But I do need to limit my side-to-side movements.”

Yen takes a bold approach into every race.

“He’s got the ability to plow through the obstacles that he faces,” the coach added. “He’s got a strong pursuit for excellence.”

The Trevians tallied five points in the Class 3A state girls track and field meet at Charleston on May 21-20.

The Trevians added a point in the 4×400 relay. Noethlich, Sullivan, senior Kate Holly and freshman Bridget Forbes took ninth in a time of 4:01.89. Lincoln-Way East placed first in 3:51.62.